Porsche needed a car to hold the fort after the demise of the 944 and before the launch of the Boxster, which makes the 3-litre four-cylinder 968 a relatively rare beast — but here are two of them.

BIGGER LITTLE BROS — TWO FOR THE PRICE OF ONE

When you think Porsche, you will often think of the 911 or 356 — both rear-engine, both air-cooled (or at least until more recent times for the 911), and both icons of the sports car world. The 356 is very desirable, in hardtop coupe or in one of the three topless derivatives — speedster, roadster, or cabriolet. Similar to larger car firms, Porsche experimented with a cheaper entry-level car for the keen but more modest income prospective purchasers so they could obtain their first foray into the brand. 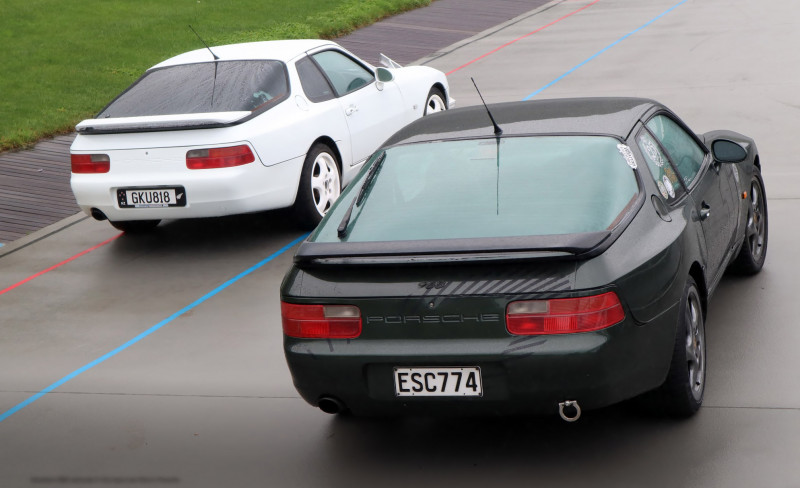 Reaching back to their roots, Porsche collaborated with Volkswagen and released the mid-engine 914 in 1969. It sold in significant numbers in the USA, and was a modest success. It was only available as a Targa with either a flat 4 or flat 6 air-cooled engine.

The flat 6 proved too expensive to manufacture and was dropped by 1972 but the flat 4 continued on and outsold the 911 at the time.

In 1976 Porsche replaced the 914 with a new model with a watercooled front engine/rear wheel drive layout called the 924. This was a huge breakaway from the rear/mid engine, air-cooled formula that had been the Porsche mantra since the initial Type 64 of 1939. The 924 was built under contract by Audi and lasted till 1988 with over 150,000 units sold. It set the scene for the generation of entry-level Porsches and broke new ground in other ways. It was the first Porsche with an automatic gearbox option, and the first to have a transaxle design, meaning the transmission was in the rear providing an almost 50/50 weight distribution.

Around the same time, Porsche designed the larger 928 using a front engine water-cooled V8 sold in various guises from 1977 to 1995. Adding this larger continental cruiser meant Porsche had two front engine/ water-cooled models to tempt the less tradition-bound buyer. While the 928 continued to be refined and upgraded, Porsche chose to replace the 924 with a slightly larger and faster model — the 944. It was released in 1983 in the USA while they continued to sell the 924 in other markets, albeit with a detuned 944 engine since Audi had discontinued the original 2-litre engine.

Around the early 1990s, strategic changes were afoot at Porsche. The 928 model was to be phased out, and instead a new entry-level model was designed called the Boxster (968) — the name a portmanteau of the words boxer (engine type) and roadster.

The Boxster 986 shared a number of parts with the upcoming 911 996 including headlights, front wings, bonnet, and aspects of the interior, thereby saving money on the development of both models. The engine was to be watercooled.

A concept was released in 1993 and a release date of 1996 was Conceived. It would be built on the same line that currently built the 928. The other significant change for Porsche was with its mainstay, the 911, which was currently known as the 993 model. Since 1963 when the 911 was first released, it had been an air-cooled sports car. Now the new replacement, to be known as the 996, would be offered with a water-cooled engine, which was a significant change for all Porsche fans.

The 944 had been continually updated during its nine years of production, selling over 163,000 units when replaced in late 1991 with a new model, the 968. The 968 contained 20 per cent of the parts of the 944. The engine was increased in capacity with a larger bore and stroke to 3.0-litres.

At the time it was the fourth largest four-cylinder engine offered in the motoring world.

The 968 was especially important. It not only had to replace the successful 944 and improve on that model but it also had to retain the buying public’s interest for four years until the Boxster would be released.

This was a tall order given the recessionary conditions of the time after the heady days of the 1980s, and the fact that the model in both 924 and 944 had been around since 1976.

What the 968 did was improve on those areas where the 944 had fallen behind its competitors: power, gearbox, and appearance. The modifications to the engine included a higher compression ratio of 11 0:1, a lighter crankshaft, and a new variable valve timing system called VarioCam.

The five speed of the Porsche 944 was replaced with a six-speed manual and a Tiptronic four-speed automatic was also offered. The 968 was now built by Porsche instead of Audi.

The chassis was largely carried over from the 944 as was much of the interior and braking systems. The externals were changed with a new front and rear modernising the look. The 968 was offered in both coupe and convertible models. The base model could achieve 252km/h (157 mph) and a claimed time from 0-100 of 6 5 seconds (manual version).

In 1993 the 968 had a facelift with some extra goodies, larger wheels and improved brakes. Porsche released some limited number special models that now sell for significant sums due to the small numbers built, such as the Club Sport and the turbo model. The turbo model could hit the 0-100 marker in 4 7 seconds.

Money was scant, and continued development on the old platform the 968 was based on dried up like snowflakes in the desert. Capital was being funnelled into the development of the Boxster and 996 models. But the 968 had an important entry in the history of Porsche, filling the gap between the 944 and the Boxster, and doing so admirably in a time when Porsche was in dire straits financially.

The two Porsche 968s in the photos here are owned by local enthusiasts based in Wellington. Both cars come from Japan where the rear indicator lights were different from most versions sold worldwide. The cars are both manuals from 1992 and still in very good condition.

The white 968 has been owned by insurance agent Damian Alexander since 2019. It originally came into New Zealand from Japan in January 2005 and passed through seven or so owners before he bought it. In the short three-year period of Damian’s ownership, the vehicle has roughly doubled in value, reflecting the heightened interest in older cars all over the world.

Damian loves his Porsche and gets it out whenever he can. It is not his daily driver but is such a comfortable ride that it can easily stand in for his modern BMW. The power and performance comfortably keeps up with traffic and its rarity creates interest wherever he goes. The car has only travelled 132,000kms. Damian has yet to put on any significant mileage but is driving it more and more.

The car is pampered, living much of its life in a warehouse surrounded by similar Stuttgart exports. Its bright white paintwork helps to keep the car looking modern as does the white 17-inch mag wheels. The interior is also in good condition reflecting the low mileage and conscientious owners over its lifetime.

The Porsche is largely untouched as Damian prefers to keep it as original as possible. He ensures it is well maintained, so it is regularly serviced by Powerhaus in Wellington. Parts are hit and miss with some easy to come by and others not so much. It’s a four-seater so good for moving the kids around sports on Saturdays. Damian loves the way it likes to be revved but its old-school performance means it is easy to stay under the speed limit. The car handles incredibly well, allowing the driver to feel the road.

It would be fair to say that Damian would love to get his hands on a 911 one day. The timeless shape and aura that surrounds the 911 means it remains on the bucket list, though he doesn’t think he would ever sell the 968. The limited numbers produced, the limited numbers in New Zealand, and the ease of driving and owning the 968 makes that an easy decision. Damian has the car bug.

The second 968 belongs to Eion Abernathy who has a bevy of German vehicles in his collection, including a Porsche 356 and several 914s. Eion also has a number of VW Beetles from various decades and loves to upgrade them with Porsche-type wheels and other upgrades. He bought his 968 in 2007 from a chap who had imported it from Japan. That importer’s intention was to turn it into a racecar to replace his aging 944, but when he saw the 968 he knew it was too good to modify, so sold it to Eion.

Eion initially drove it around and enjoyed it for its smooth ride. He then parked it up for a few years, taking it out only sporadically to keep its mechanicals turning. At some point Eion decided to make a few minor modifications to the Porsche to make it even more drivable, installing a limited slip diff and swapping the 16-inch wheels for 18-inch ones.

Eion can turn his hand to mechanicals as easily as he can manipulate hardware and software and he has installed a lightweight clutch, which makes gear changes quicker and easier and more in tune with a modern vehicle. Lastly, Eion installed an upmarket exhaust allowing the 3.0 litre to breathe a little easier, and also added some livery and a tow hook that give it a race car appearance.

The Porsche is now a joy to drive, quite peppy. Eion loves taking it out, “It is much more of a driver’s car now and it has a spring in its step while still retaining its originality”. Eion loves to share his collection of Porsches and VWs and is always happy to invite people to view his cars.

A huge thanks to the Wellington City Council and the Port Nicholson Poneke Cycling Club for the use of the Wellington Velodrome, which I hoped would emulate the steep banking of the famous Porsche Weissach test track in Germany. The Porsche 917 was tested there as well as the 968 before being launched.

Eion Abernathy and Damian Alexander with their Porsches on Wellington's stand-in for the Weissach test track with some very German looking weather “It is much more of a driver’s car now and it has a spring in its step while still retaining its originality” The family resemblance to the V8 928 is strong in this view.

The rear of the 968 looks as fresh today as it did when launched.

The interiors are typical Porsche, all practical and ergonomic

The chassis was largely carried over from the 944 as was much of the interior and braking systems.

The externals were changed with a new front and rear modernising the look.

While the 928 continued to be refined and upgraded, Porsche chose to replace the 924 with a slightly larger and faster model — the 944

Damian's 968 narrowly in the lead over Eion’s Porsche