Originally starting life as a 1959 3.4, this Mk1 has recently been been given a 3.8-litre and was built for fast road use.

The combination of Mk1 bodyshell and 3.8-litre XK wasn’t offered from the factory but as we discover, it makes for an entertaining drive.

This is a car that shouldn’t exist. When Jaguar’s first compact saloon–what we now call the Mk1–was on sale between 1955 and 1959, it only had the option of a 2.4 and 3.4-litre straight six and not the more powerful 3.8. But that’s exactly what we have here. Developed in 2015 for fast road use by an established marque expert, not only was the braking and handling improved but the original engine was swapped for an example of the larger unit resulting in a combination Jaguar itself never produced. But after trying this one, perhaps it should have done. 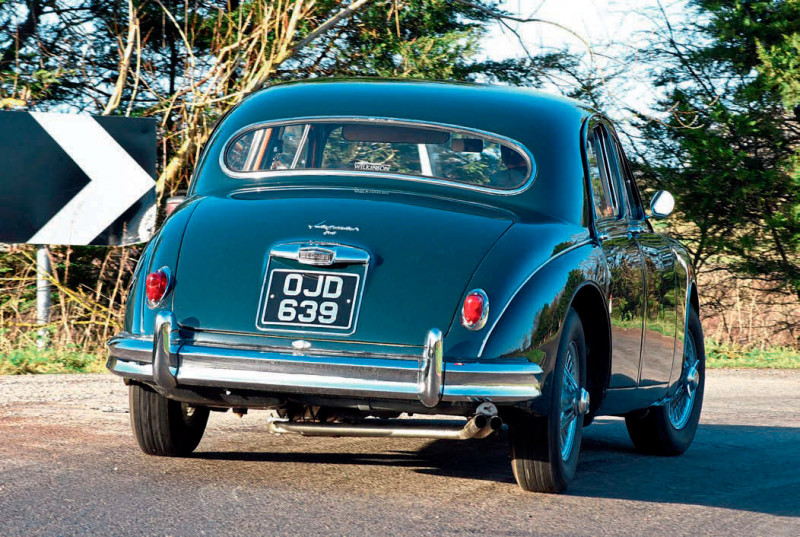 Built on 6 April, 1959, the car (chassis S977102DN) was originally a 3.4 in Cornish Grey with red leather upholstery and distributed via Frank Leurs & Co to R P Powell (Motors) Ltd in Forest Gate, London. The car’s first owner is said to have been the brother of Lady Cheetham, Humphrey, who immediately had the saloon repainted in his favourite colour of British Racing Green. 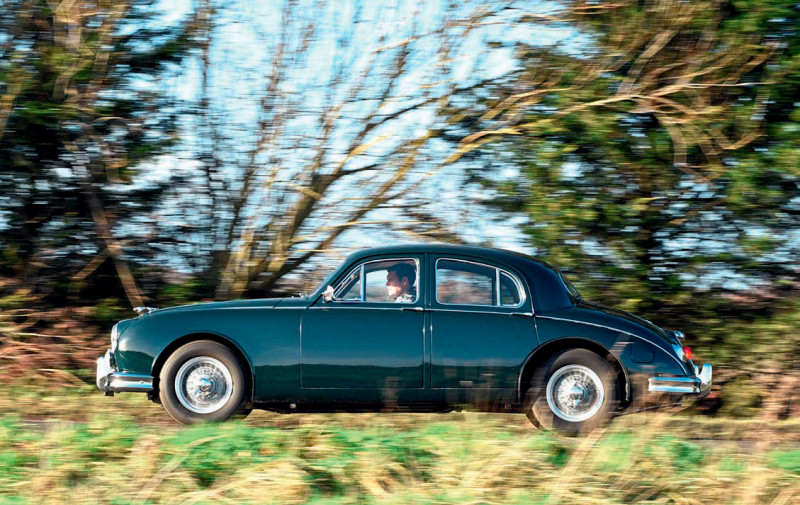 Since he was in the army, Humphrey used the car only sparingly when he was home on leave. He died not long after leaving the military but Lady Cheetham retained his Jaguar for sentimental reasons. Her then neighbour, the former Le Mans winner and notable car specialist, Duncan Hamilton, looked after the Mk1 for her including taking it for an occasional drive since she rarely did.

It’s rumoured Hamilton once used the 3.4 for a hill climb but this can’t be substantiated. The Jaguar was eventually sold to an occasional employee of Hamilton’s, Shaun Baker, who kept the car until 2015 when it was bought by Michael Wilkinson from established marque experts, M&C Wilkinson, for his personal use. 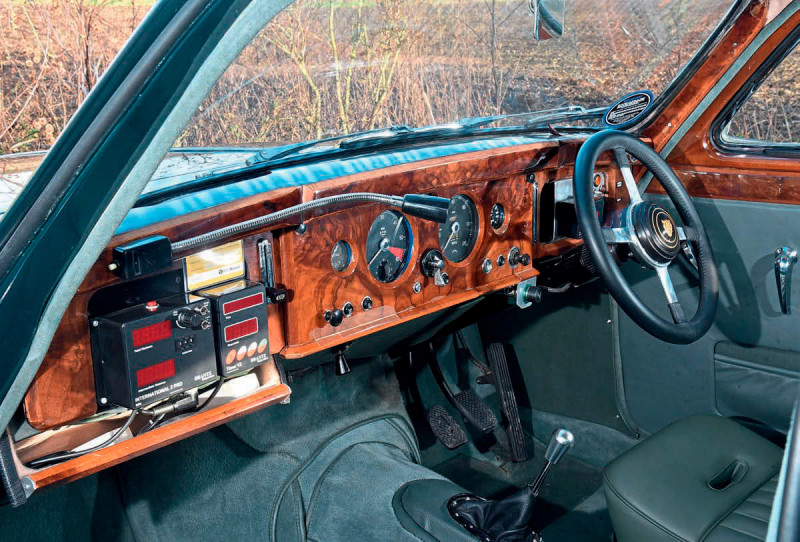 Although structurally sound and not suffering from rust, the largely original car was still looking tired and so Michael began a sympathetic restoration that started with a bare metal respray, again in BRG rather than the original grey. The leather upholstery was changed from red to Suede Green at the same time.

Wanting to use the Mk1 for touring, Michael rebuilt the car to what he describes as ‘fast road spec’. This included swapping the original 3.4-litre for a 3.8 that had been rebuilt by M&C Wilkinson while an all-synchro four-speed transmission from a Mk2 replaced the often awkward to use Moss box.

The propshaft was replaced and the rear axle rebuilt using a Powr-Lok diff. Following experience restoring the former Tommy Sopwith racing Mk1 – IVA 400–Michael added extensions to the rear wheel hubs to widen the track and therefore increase traction. An all new braking system was added that included an upgraded master cylinder and servo. 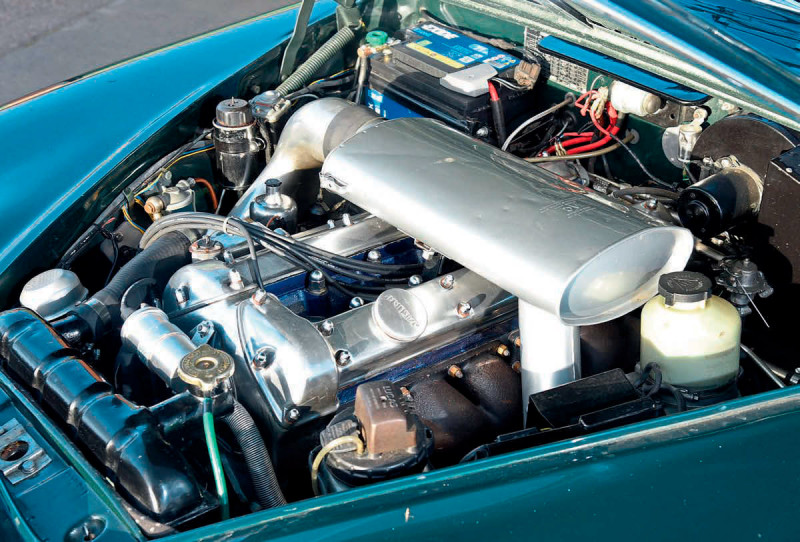 Power steering was then fitted as were Koni adjustable shock absorbers and Coombs front springs. Finally, the car was given new 15in wire wheels complete with a fresh set of Pirellis.

Michael kept the green Mk1 for over three years, its speed and comfort meaning the car soon became a firm favourite with him and his wife for drives through the beautiful North Yorkshire countryside. In 2018 the Jaguar was sold to a friend of the family, racing driver Chris Scragg, who wanted to use it for classic rallying and so had timing equipment, harnesses and front bucket seats fitted.

A change of circumstances meant Chris only managed a single event when it apparently performed faultlessly. It’s now with Michael Wilkinson’s sales department, Sayer Selection Ltd, where I’ve travelled to see the car.

What strikes me first is how good looking the Mk1 is, the fresh British Racing Green paint perfectly suiting its curvaceous yet compact proportions. Yet despite the many changes under the skin, it looks largely standard with even the 3.4 badge remaining on the boot lid. Only the purists would notice the slightly wider rear track that doesn’t allow for spats, giving the car a more masculine stance than normal.

It’s only when I open the door and spot the timing gear on either side of the veneer-covered dashboard plus the tight bucket seats and racing harnesses that the car finally reveal its true intensions. I’m assured by the Sayer Selection team that everything is removable and they have original seats if the new owner prefers them. No radio, though. Rally cars don’t need them.

Although the smaller size of the modern steering wheel allows for easier ingress, I’d still replace it for a larger, wood-rimmed original since in my eyes the chrome and black leather make it out of place in such traditional surroundings.

The straight-six bursts into life the moment I hit the starter button, sounding smooth yet eager, traits that don’t disappear after I slot the lever easily into first and squeeze the throttle.

With the 3.4 originally weighing a minuscule 1400kg yet the 3.8-litre producing 265bhp when new (55bhp more than the 3.4) it results in a genuinely fast car that responds the moment I put my foot down. The acceleration is crisper than an expensive Pinot Grigio but with a kick harder than a cheap, supermarket brand. As the speed increases, the cabin is soon filled with the familiar twincam growl of the XK unit meaning I no longer miss listening to PopMaster.

This brisk acceleration is further heightened by the slightly later four-speed transmission. Whereas the Moss box grates and graunches its way through the gears, the Mk2 unit is surprisingly quick and precise, the stubby lever slotting smoothly into place, offering less resistance than butter would to a hot knife.

The power steering is sharp and accurate, offering the perfect amount of resistance to take corners with much more confidence than a totally standard example. This increased agility is a perfect match for the heightened responsiveness of the 3.8-litre unit. Changing down to third and balancing the throttle through a bend before nailing the pedal on the exit to feel that hard surge of power is a genuine moment of motoring nirvana.

Yet despite all the upgrades and the resultant increase of speed, this is no over-the-top hot rod and still feels like a classic Jaguar saloon to drive, albeit a well-sorted one.

Although a Mk1 with the 3.8-litre engine shouldn’t officially exist, thanks to its excellent performance together with its huge character, I’m glad this one does.

Thanks to: Sayer Selection Ltd (sayerselection.com)

Original red trim was replaced with Suede Green during restoration. The 3.8 engine was rebuilt by M&C Wilkinson and rally timing kit was added by a subsequent owner.

Article type:
Review
jaguar1959 jaguar mk11959jaguar mk1
—
75
Write a comment
No comments yet. Be the first to add a comment!