A quirky outlier that managed to find a mainstream audience, and justified Citroen’s existence to its new masters. Photos Ellen Dewar.

What do a Peugeot 205, Marcello Gandini, Volvo, Reliant, and eternal ruin all have in common? Either directly or indirectly, they’re all connected to the Citroen BX.

From an Australian perspective, the BX was such a peripheral car – hobbled by restrictive import duties that prevented many Continental classics from thriving here during the 1980s – but in Europe, the BX saved Citroen’s bacon. 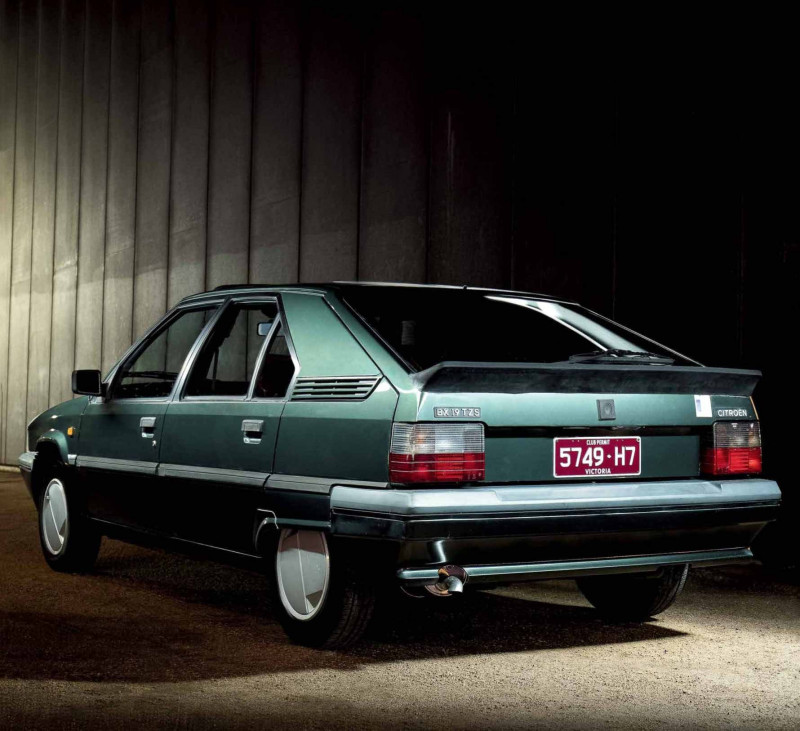 Across a 12-year lifespan, more than 2.3 million were produced, and while those numbers have since dwindled dramatically, interest in the BX has skyrocketed in recent years as people have finally started to treasure its fi ne engineering, individual design and inherent reliability.

The BX was the first complete car developed by Citroen after its takeover by Peugeot in 1976 (following Citroen’s bankruptcy), and while those sugar-daddy funds allowed Citroen to continue producing weird, nonmainstream products such as the CX, GS and 2CV, what it needed was a proper commercial hit.

Citroen had to prove to its conservative master that it could create a car that still appealed to nouvelle vague French radicals while also performing dutiful service as a rep-mobile and loyal family hauler – ‘original without being eccentric’, in other words. 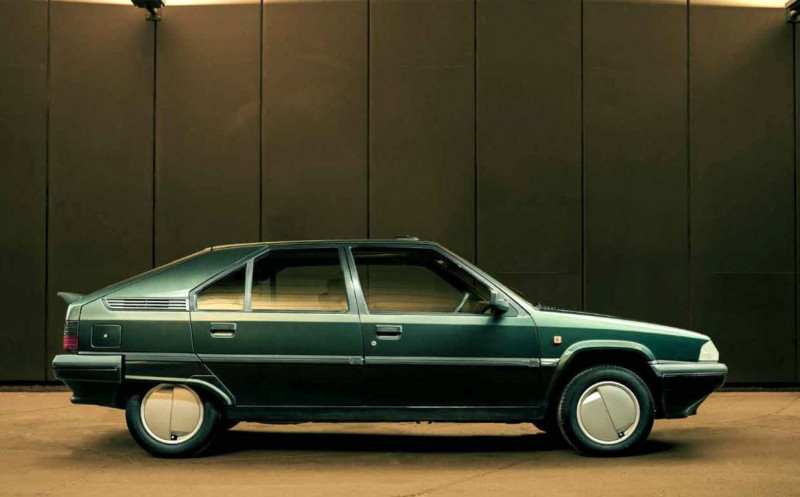 However, compared to the other all-new, high-tech, medium-sized offerings of 1982 – namely the Ford Sierra and Toyota’s original Camry – the BX was still wilfully weird.

So how does the BX tie together the Lamborghini Miura’s designer, Peugeot’s greatest-ever hatchback, Sweden’s greatest export besides Abba and the makers of the three-wheeled Reliant Robin?

Working for Bertone, Marcello Gandini sketched a medium-sized four-door lift back for UK car company Reliant in February 1977. This detailed, full-colour design showed the car from every angle and featured several styling cues – most obviously the angular rear door glass, C-pillar shape and horizontal C-pillar vent, as well as squared-off wheelarches inspired by Gandini’s 1976 Lamborghini Silhouette – that would eventually find their way onto the production BX. Gandini’s initial sketch grew into the Reliant FW11 prototype, and even though that car never reached production, its aesthetic continued to evolve.

In 1979, Bertone’s Gandini-designed X1/10 concept for Fiat (a potential X1/9 replacement) again featured squared-off wheelarches and a horizontal angularity. Then Gandini produced two design proposals for Citroen’s ‘Project XB’ (the GS replacement), both clearly evolutions of his earlier Reliant proposal, which were subsequently approved for development into clay mock-ups.

That same year, Gandini’s stunning Volvo Tundra concept appeared – commissioned by the Swedes to transform the frumpy 343 hatch into something more modern. The Tundra further explored Gandini’s established design themes, and, after being “politely declined” by Volvo for being too progressive, elements of Tundra would appear on later Project XB styling developments, and ultimately the finished car. 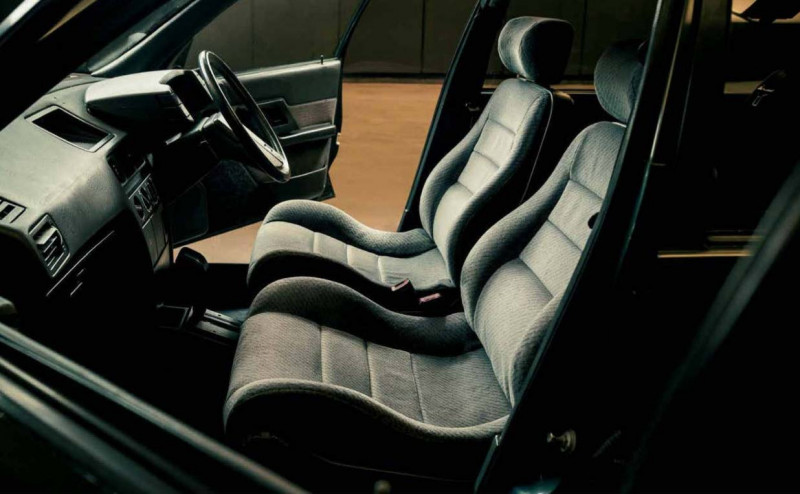 In other words, creating the BX wasn’t simply a case of Citroen seizing the rejected Volvo Tundra and going “we want summa dat” (in French), as is common folklore. This was an artfully considered evolution from Gandini’s original 1977 design sketch to the production BX that debuted at a Paris Motor Show presentation under the Eiffel Tower in October ’82.

Even though the BX lacked the mechanical innovation of its GS predecessor, it still pushed boundaries. Riding on an all-new platform, it used galvanised steel for the doors and much of its body structure, but plastic composites (polyester resin and fibreglass) for the bonnet, tailgate and bumpers to keep its waistline trim.

In its lightest form the BX weighed just 870kg (for the puny BX11 sold only in Greece, Italy, Portugal and Ireland) and even though range-topping variants like the later BX19 16-Valve were 200kg heavier, that was still 100-150kg less than the competition.

This weight optimisation meant the BX didn’t need much engine capacity to offer decent performance, despite its unremarkable 0.34 drag coefficient. And while the BX abandoned the GS’s all-alloy, all-Citroen flat fours in favour of Peugeot in-line fours, it debuted a new-generation 1580cc XU-series engine that later appeared in Peugeot’s legendary (and closely related) 205, and followed up with a 1905cc version (in the 1985 BX19 GT) – the hearty engine that helped define the 205 GTi.

In an example of what Citroen purists perceived to be dumbing down, the front suspension would forego the GS’s double wishbones for a simpler MacPherson strut layout, however, the BX retained Citroen’s legendary hydropneumatic system of hydraulic damping and self-levelling, with gas spheres for springing on all four wheels. The rear suspension was based on the GS’s semi-independent beam axle/trailing-arm layout with horizontal dampers (for minimal boot intrusion), and the BX continued with four-wheel disc brakes.

But its mechanical simplification did solve one major GS bugbear – ease of servicing. The flat-four GS required engine removal to change its spark plugs whereas the BX needed no special tools, could have suspension components replaced without having to re-set the steering geometry, and its braking hardware could be removed without disturbing the wheel bearings.

Yet the BX was still far from conventional. It featured a single windscreen wiper, a single-spoke steering wheel, non-self-cancelling indicators operated by a rocker switch on a satellite pod near the instruments, and a barrel-dial speedometer (like old bathroom scales) in almost all models (bar the GT), joined by the theatricality of adjusting its suspension height, or watching a BX slowly deflate to the ground when parked. 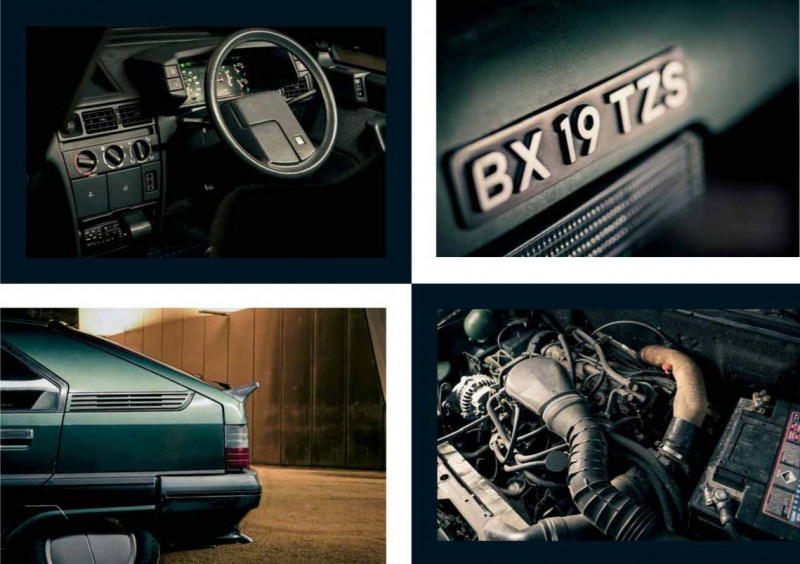 It took a while for the BX to gather momentum but as the line-up expanded – a ‘Break’ station wagon and diesel version in 1983, followed by an extensive facelift and widespread fuel injection in 1986, and a hugely popular turbo-diesel in 1988 – sales grew exponentially. Australia’s BX relationship began in 1986 with an initial batch of 349 cars, all 1985-plated, leaded-petrol, pre-facelift models, meaning the BX at its quirkiest. Two variants were offered – a 67kW/129Nm 1.6-litre BX16 TRS in five-speed manual (50 cars) or four-speed ZF automatic (190 cars), and a 75kW/158Nm 1.9-litre BX19 GT five-speed manual (99 cars) – each with a single carburettor.

The BX’s trump card, though, was space, with a light hatchback tailgate accessing a generous 445-litre boot, and its long 2655mm wheelbase (compared to its relatively compact overall length of 4230mm) providing acres of cabin space everywhere apart from headroom, especially if a sunroof is fitted.

The BX’s mid-life facelift in 1986 introduced an all-new, much more conventional dashboard, tweaked styling (the orange ‘wedge’ front blinkers became clear and blended with the headlights, for example), fuel injection in upper-end models and the first BX GTi. Then the BX 16-Valve arrived, which in leaded form produced 118kW (compared to 108kW in our unleaded model) and could hit 220km/h.

In Australia, the excellent BX 16-Valve and enormous BX Estate arrived in ’89, and even though the wagon was dropped after 1992, BX hatchback models soldiered on until 1994 – the 16-Valve ending its career at a sharp $38,990, making it cheaper than a WRX.

These days, even an absolutely mint example of that car wouldn’t trouble your wallet for any more than $15K and we know of a recent 16-Valve with 170,000km that sold for $12K. At the opposite end of the spectrum, recent high-mileage (300,000km-plus) wagons have all sold for less than $5000, and reasonably quickly because Citroen purists recognise the BX for what it is – an advanced but also highly practical and serviceable car that’s long-lasting and brimming with unusual design flair. It’s long been said that a BX 16-Valve is the car you have once you’ve outgrown your 205 GTi.

About the only real negative is brittle plastics, especially earlier BX interiors, which don’t really handle European sunlight, let alone an Aussie blow-torch – meaning harsh weather is not a BX’s friend. In recent years the BX has become France’s Holden Torana – a car that was once as ubiquitous as chain-smoking in restaurants but is now a rare and prized possession. And it’s that classless, timeless appeal that has come to define what the BX stands for – liberté, égalité, fraternité.

ON THE UP AND UP TAKING THE LIFT

The defining Citroen feature of the BX is its height-adjustable, self-levelling hydropneumatic suspension, which is far more reliable and inexpensive to maintain than most people give it credit for. You can buy brand new spheres (in soft, intermediate, or firm) for less than $100 per corner and providing all the piping is in good nick, long life is assured. You do need to wait for it to ‘warm’ up though, which can take a minute if the car has been parked for a while.

In Australia, the BX16 TRS became the facelifted BX19 TRI (for ‘Injection) in 1987, initially with 75kW, then with 88kW. A final update in 1990 saw the TRI become the TZI, with changes limited to new wheel designs (like the space-age wheel-covers on the UK-spec ’91 BX19 TZS seen here), smoked tail-light lenses and upgraded trim. High-spec models gained ABS brakes but, intriguingly, lost the additional horizontal window embedded into the C-pillar (lower-spec BXs always had a solid rear pillar).

Facelift brought in this conventional dash, replacing the weird barrel-dial speedo Original design saw a glass panel in the C-pillar on up-spec models Below: engine is a close relation to the 1.9-litre four in the legendary Peugeot 205 GTi

Article type:
Review
1982 citroen bxcitroencitroen bx
—
145
Write a comment
No comments yet. Be the first to add a comment!