We’ve tested the all-electric new Fiat 500 in hatchback form. Now it’s the turn of the canvas-roof 500 Convertible – which is, says Fiat, the only four-seat fully electric convertible available anywhere in the world. 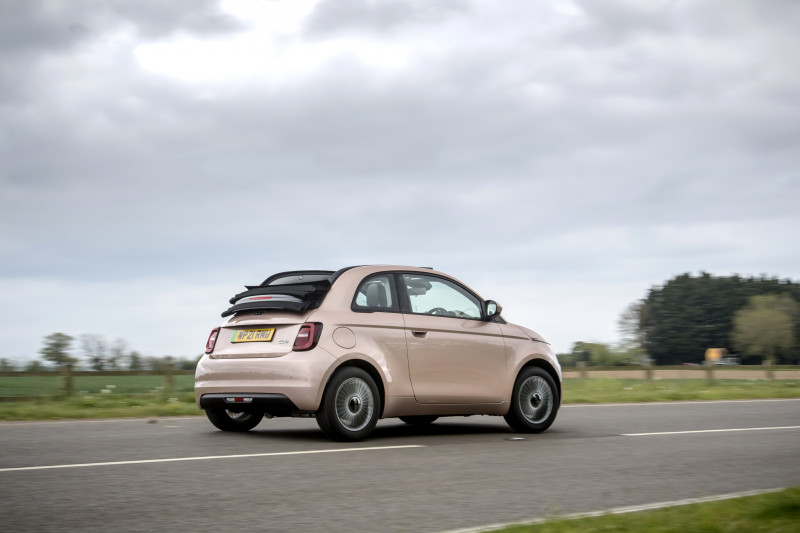 When the original Fiat 500C came out, I thought no one in their right mind would pay well over two grand extra for what amounted to, in my book, a fancy sunroof. How wrong I was. The drop-top has been a mainstay of the 500 range, selling in its thousands to… well I don’t want to typecast but I’ve noticed a preponderance of elegant ladies of a certain age. Which makes the paint scheme of my test car (Rose Gold) entirely apt, even if I get some odd looks from other road users (not myself being a lady of a certain age, nor indeed elegant). 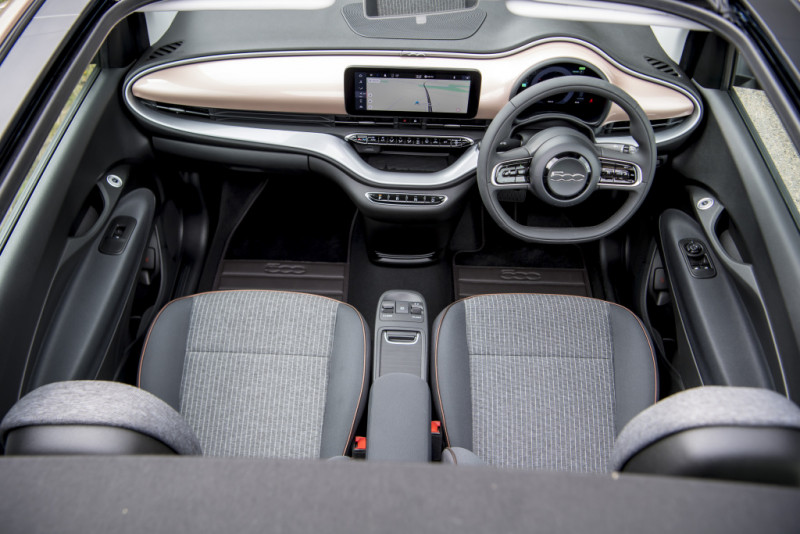 When I think of a convertible, I picture a car with a roof that folds right out of view behind the rear seats, not a canvas sunroof like the 500 has. But hey, the original 500 of 1957 had a ‘rolltop’ roof so I suppose I can take it. The week of my test was sunny – there was one this summer, I promise – so I drove most of my time with the roof folded back. 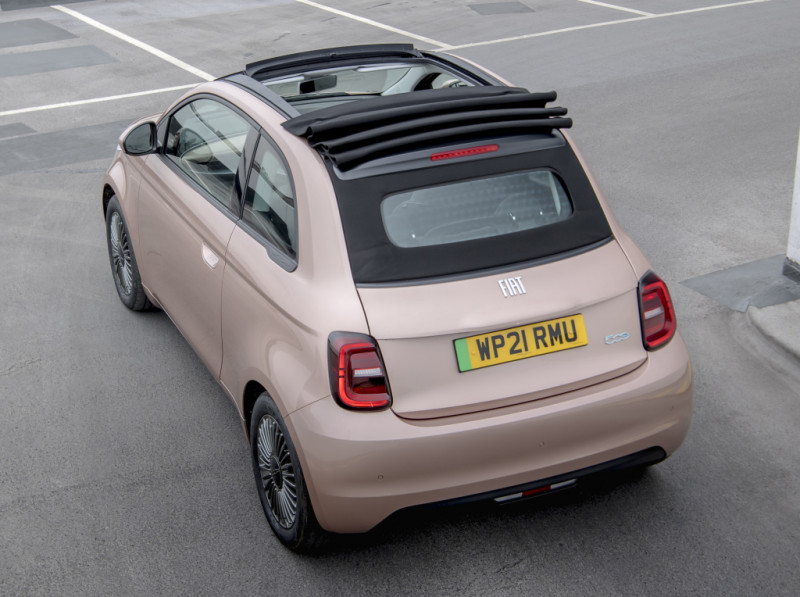 A few open-roof notes. It’s just so pleasant to have the air wafting through the cabin and the sun on your bonce. However, it’s not so pleasant when you roll back the roof to the first of its two positions (just above the rear passengers’ heads), since the buffeting noise is so awful at speed. Press the button again and the roof slides back to just above the bootlid and suddenly the noise is much less obtrusive. However, the same visibility issues affect this iteration of the 500 Convertible as the previous one: with the roof fully folded back, you really can’t see anything in the rear-view mirror. 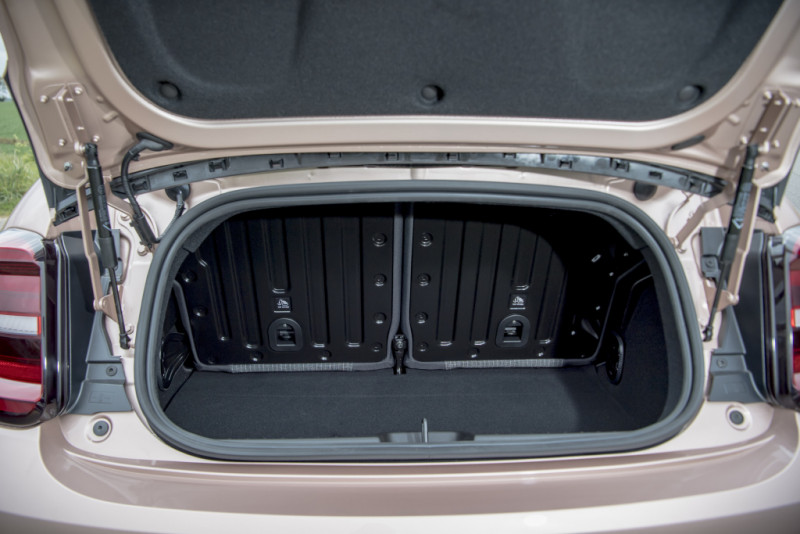 Another factor you’ll have to live with is the half-height bootlid, which makes accessing the boot tricky. But fold the rear seats down and you still have plenty of space for ponchos and poodles.

Opening the door via the flush-fitting electric handle, you’re greeted by a spacious cabin, a pleasingly low seating position and plenty of space up front (though it’s much tighter in the back). Our high-spec Icon trim test car has a superb 10.25-inch touchscreen in the middle of the dash with a clear and easy-to-use display, plus a seven-inch digital instrument display ahead of you. As for how the electric 500 Convertible drives, I have no qualms on that score. 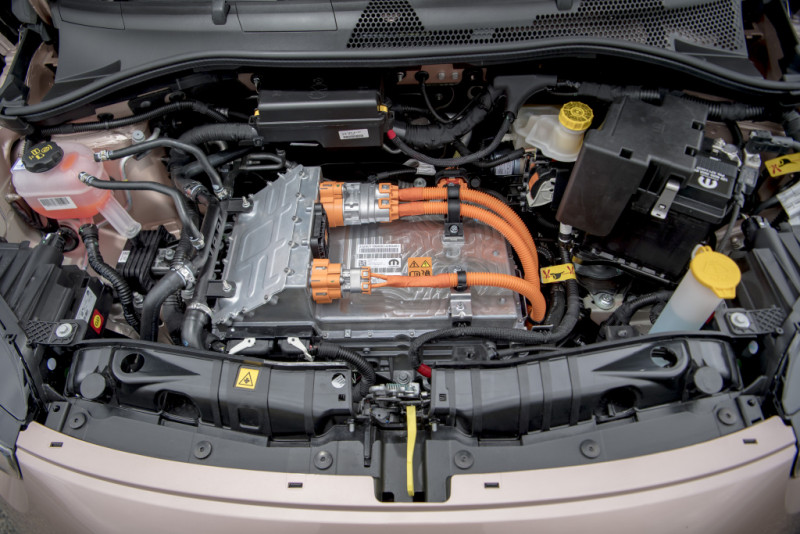 The drop-top is only available with the higher-spec 118hp, 42kWh electric system (a smaller 95hp motor and 24kWh battery pack are available with the hatchback). Press the ‘D’ button on the ‘PNRD’ array and the single-speed automatic makes driving simplicity itself. With full torque on tap from the off, acceleration feels genuinely rapid (0-62mph in 9.0 seconds, for instance). This is a superbly refined drive, too, with almost no powertrain noise.

Since the batteries are sited so low down in the chassis and wholly between the axles, the handling is really good, with next to no body roll, plenty of grip and very predictable behaviour. However, the steering is a bit light for my taste and lacks a sense of feel and feedback.

There are three driving modes to choose from: Normal, Range and Sherpa. In Range you have throttle-off braking by the bucketload – ideal for urban traffic as you can effectively use the accelerator pedal alone and hardly need bother with the brake pedal. Sherpa mode turns off things like air con to maximise range.

Speaking of range, Fiat quotes a total of 199 miles. However, starting with a full battery, the dashboard shows a 161-mile range – good but not world-beating. Flip open a flap on the offside rear to recharge the batteries, which takes about six hours using a home Wallbox.

The £2650 premium charged for the convertible over the hatchback will be easily swallowed by those who love their open-roof motoring. And as Fiat says, where else can you go to buy a four-seat open-roof electric car? Answer: nowhere.