Alfa Romeos pull at the heartstrings in a way few other cars do, and for Ian MacPherson it was love at first sight.

Alfa Romeo has something of a split personality. On one hand, it seems almost incapable of producing an ugly car design — OK, there is the Alfa 75. On the other hand, prior to the 1990s, its vehicles had a reputation for plummeting second-hand values, unreliability, and rust. Nowadays, while it still produces very pretty cars, I am glad to say that Alfa has conquered its demons and improved immeasurably in both reliability and rustproofing — and the brand’s reputation has almost caught up to this fact. 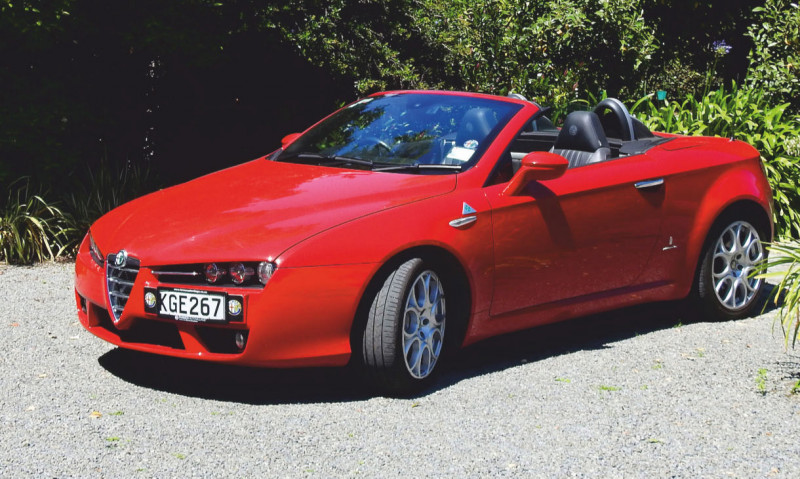 This was further confirmed on a recent trip to Napier, when Ian MacPherson invited me to see his 2007 Alfa Romeo Spider. In coupé form it is known as the Brera, itself a great-looking car, but the muscular lines of the Spider could well be proof of the old adage that less is more.

Since buying an Alfetta coupé in 1979, Ian has always had at least one Alfa Romeo parked in his garage. Over the years he has owned 20 examples of the marque. At present, there are four Alfas in his stable: a 1993 Spider (LHD), a 2007 159, a 2019 Giulietta, and the car of this story, the 3.2-litre V6-powered Spider, which is, in my opinion, probably the prettiest of the bunch.

BRERA WAS TO BE RARER

Designed by Giorgetto Giugiaro of Italdesign, the inspiration for this Alfa Romeo Spider first appeared at the 2002 Geneva International Motor Show as the Brera coupé. The Brera was intended to be a one-off concept car and, despite wanting to replace its long-running GTV and Spider, Alfa was not planning on putting a Brera derivative into production. 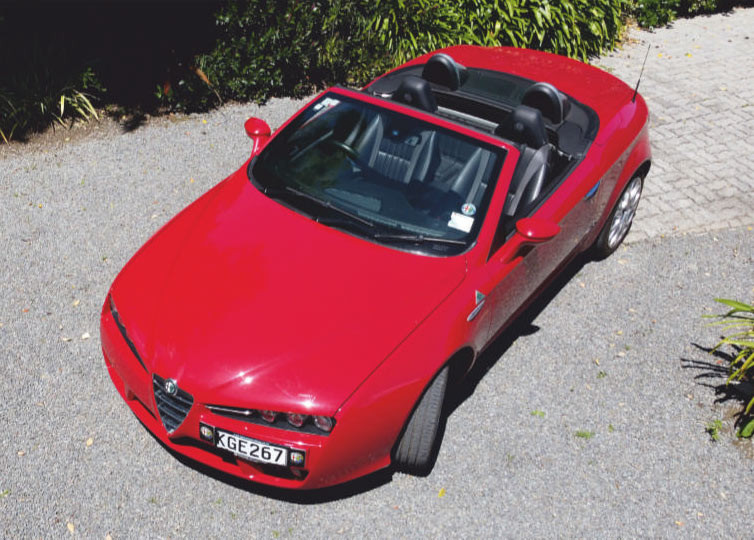 Usually, once a show is over most concept cars are put away, their legacy perhaps a few styling cues eventually making it onto everyday runabouts. The Brera’s scissor doors and Maserati V8 were clearly never going into production but it was one of the darlings of the show and received a lot of good press.

The vast amount of positive feedback seems to have twisted Alfa Romeo’s arm so the company decided to go with public opinion and put at least most of the looks of the concept car into production with almost no visual or dimensional changes. Even the name Brera, taken from a suburb in Milan, would remain. Indeed, Alfa was so persuaded of the concept’s visual appeal that variations of the grille and the multiple headlight units became the new face of all Alfa Romeo cars for the ensuing years.

Pininfarina was commissioned to ready the concept car for production while simultaneously designing a roadster version of the coupé. When the first car rolled out of the Pininfarina factory in 2005, the Maserati V8 and scissor doors were gone but in all other aspects the car remained faithful to the initial concept. One year later the Alfa Romeo Spider was launched at the 2006 Geneva show. The car was originally offered with two engine choices: an entry level car sporting a 2.2-litre four-cylinder motor, and a big brother propelled by a 3.2-litre V6 power plant. Later, a diesel and a turbocharged 1.7-litre engine would be added to the line-up.

Ian’s car is the 3.2-litre V6. It is derived from the same General Motors engine found in the Holden Commodore but with several Alfa Romeo go-faster bits added to produce 20 more kilowatts of power than standard in a much lighter body than the Commodore. The exhaust note is, of course, tuned to give that distinctive Alfa Romeo sound. As the base model is a front-wheel drive car, Alfa was a little worried about what would happen with all the extra power of the V6 going through the front wheels, so it was spread over all four. The four-wheel drive system usually sends 57 percent of the torque to the rear wheels, but, should the car get into strife, the ECU can instantly vary the amount of torque at the rear wheels to between 28 and 78 percent. The base model in New Zealand was a 2.2-litre in-line four-cylinder engine but the one to pick is the more powerful 3.2-litre V6. All variants came standard with a six-speed manual gearbox although Ian believes that the five-speed was the better gearbox as the V6 car does not need a sixth gear.

THE PLACE TO BE SEEN

The interior has typical Italian flair and is a great place to be. The seats are comfortable, the dials and gauges are clear and easy to read, and the quality is tangible in its longevity as Ian’s car approaches its second decade. The Spider comes with all the whistles and beeps, such as backing sensors and cruise control — not common with cars of this era. However, the rear seats should be treated as a nicely upholstered parcel shelf as they are not much good for anything else.

The exterior is what this car is all about. The first impression — even with almost 20 years under its belt — is that this car is something special. Upfront are no fewer than eight lights, with a similar number at the rear.

Apart from a couple of dimensional changes and a missing roof, not much is different from the original concept car. I believe Pininfarina did a great job of turning the coupé into the Spider, as the car looks special from every angle.

Guglielmo Cartia of Pininfarina describes the car as “A flow of the lines, never parallel and always curved, to evoke a sensation of speed; the sensory perception of the environment, defined by Italian taste and sinuous forms, with a rich range of nuances; and the selection and matching of materials to represent the luxury of the cabin combined with sportiness”.

Ian was probably not thinking these words when he saw the Spider in the flesh for the first time. He was out driving his Hyundai Sonata, the family shopping basket, and it never occurred to him that he would not drive it home. Well, at least not until he drove past a car sales yard and amongst all the everyday cars was the Alfa Romeo Spider. He was instantly smitten. Even with just a quick glance, the Spider had a presence that made it stand out from the cars parked around it. Needless to say, Ian threw out the anchor. He parked his Hyundai in the car sales yard and drove home in the Spider — a decision he has never regretted.

In the three years Ian has owned the Spider it has proved to be exceptionally reliable; the only fault has been with the electric soft-top, which, in true Italian style, was not cheap to fix. It was a sunny Napier day when Ian handed me the keys and, although he demonstrated how the soft-top worked, I knew I would not be putting it up. It was the type of day specifically designed for wind-in-your-hair, top-down motoring. This form of motoring offers sensory feedback almost impossible to describe to anybody who has not experienced it.

Reaching for the starter button, I knew I was about to have a good time. I headed out into open countryside and, as I gained confidence and the speed built, I realised I was experiencing something I was not expecting in an open-topped car — comfort! With the side windows wound down and the climate control doing its thing, I could easily have believed I was driving under a glass roof. Nothing beats the experience of driving along a country road on a fine cloudless spring or autumn day. The colourful vista is enhanced by the smell of trees and flowers as you drive past. Thanks to an excellent heater and air-conditioning system in the Spider, these two seasons can be extended into summer and winter, but autumn and spring are the best times to drive this type of car.

Inside the cockpit I experienced no buffeting nor banging from the wind. Normal conversation was not a problem. There was none of the windy grittiness of an MX-5 sports car; instead, it had all the refinement of a GT sports car similar to a Jaguar XF roadster.

The V6 has plenty of power but I must admit it lacked something of the rawness I was hoping for. The 3.2-litre motor is torquey but not awe-inspiring. The car is very sophisticated and quiet, and has to be pushed beyond 5000rpm for you to hear that classic Alfa Romeo song. The power steering is a little light and does not communicate the road very clearly. If anything, the suspension is on the soft side of firm, but this does mean that bumps are taken without the harshness and feel of earlier Spiders.

I agreed with Ian; the six-speed gearbox seems to be one gear too many, fifth and sixth gears being more for economy than performance. Gear selection is smooth but not fast, lacking the preciseness of the earlier five-speed boxes. The car is not slow, second gear easily taking me quickly past the legal speed limit. The all-wheel drive engine is silky smooth and the engine exhibits a clear power band that cuts in at around 4500rpm, pulling strongly to about 6000rpm.

At the end of the day, the Spider, in my opinion, looks better than it performs. Women will wear expensive Italian shoes, not because they are functional but because they look good and the women feel good wearing them. The Spider may not have the raw performance some would expect from a sports car — or a sports shoe, to continue the analogy — but this is a car you drive because you feel good driving it. And you look great.

It might not provide the sparkling intimate conversation you often get when communing with an Alfa but, especially with the top down, this car connects you with wider horizons, allowing you to relax and enjoy everything around you. It is a car to be driven deep into Hawke’s Bay’s wine country, with pleasant company alongside and a day’s indulgence ahead of you.

This Spider has real charm and, like many Alfas, it is a car you buy with your heart, not your head.

He was instantly smitten. Even with just a quick glance

The Spider comes with all the whistles and beeps