OBSCURATI CURIOSITIES FROM THE AMAZING WORLD OF ITALIAN CARS

The name Franco Sbarro arches across the decades. The Italian-speaking Swiss entrepreneur made a name for himself in the 1960s converting sports-racing cars like the Lola T70 into road-legal machines. He then became a manufacturer in the 1970s with projects as diverse as the mid-engined Stash sports car and BMW 328 replicas – basically, a kind of Swiss version of Robert Jankel’s Panther marque. 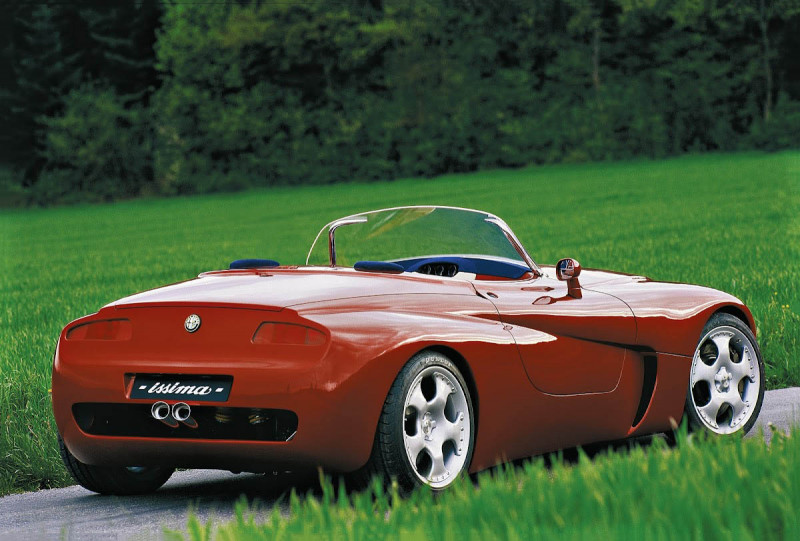 In 1992, Sbarro had the brilliant idea to found a car design school. Every year at the Geneva Show, projects designed by his students would be unveiled to an unsuspecting public. Some of the most extraordinary cars ever conceived were paraded at this event.

One machine that undoubtedly qualifies for ‘extraordinary’ status appeared at the March 1996 Geneva Show. It was called Issima, which in Italian is a suffix that indicates the superlative, and can be roughly translated as ‘to the max’ – and that it certainly was.

The project even had semiofficial status. During the Car Design Award ceremony at the 1995 Geneva Show, Franco Sbarro had met Walter de Silva and Mario Favilla (respectively number one and two at Centro Stile Alfa) and hit it off. The Alfa men agreed to a Sbarro project that would use Alfa Romeo badges. Not only that, the design guidelines would be laid down by de Silva and Nevio Di Giusto of the Fiat Group, while the technical side would be advised by Stefano Iacoponi of Fiat.

As revealed at Geneva in 1996, the Issima’s smart styling was widely admired. But the main reason why this car was so extraordinary lay under its long clamshell bonnet, which lifted to reveal a 12-cylinder Alfa Romeo engine. Of course, no such engine existed. What Sbarro had done was combine a pair of Alfa Romeo ‘Busso’ 3.0-litre V6 powerplants. This was not the first time Sbarro had combined two engines together: his Bugatti Royale replica had a V16 engine by squashing two Rover V8s into one, and his Super Twelve used two motorcycle engines back-to-back.

Nor was it the first Alfa ‘bimotore’ either. The Alfa engines were coupled by a power take-off through the oil sump and Sbarro quoted a peak output of 500hp at 6500rpm.

Despite accommodating such a long powerplant, this was a very compact car, measuring only 3.8 metres long and 1.8 metres wide, and weighing just 1200kg (thanks to the ‘dual frame’ chassis designed by Sbarro). It took its suspension from Alfa’s 155 DTM racer, with Brembo high-performance brakes and unique five-hole 19-inch alloy wheels developed by Anther.

The styling was recognisably Alfa in many ways, from the triangular grille and characteristic bonnet lines to the Kamm tail with its twin centre-exit exhausts. The ‘moustache’ grilles and unusual headlights recalled another 1996 Alfa Romeo concept car: the Nuvola.

Recalling Alfa’s 916 Spider were the deeply sculpted flanks (which gave the impression of two separate volumes), while it also had scissor doors. The cabin was minimalistic in the extreme, with two seats embedded into an enveloping space and the bare minimum of switchgear. The Issima was reportedly a fully functional prototype that was even taken to Balocco, Alfa’s own test facility, to be assessed. However, what became of this curious one-off thereafter is unknown, which seems a shame.