From work on Hollywood sci-fi blockbusters to designing the tail-lights on the ’64 Falcon Futura, designer Syd Mead’s star turn was the Ranger II concept pick-up truck, as Richard Heseltine discovers…

From here to obscurity

Syd Mead is perhaps best remembered for his conceptual artwork and design for films such as Blade Runner, Alien and Tron. He was labelled a futurist during his lifetime, and that’s a fair assessment when you consider his prodigious cinematic output. However, it’s easy to overlook his contribution to car design. And make no mistake, shaping automobiles and commercial vehicles was his first love. 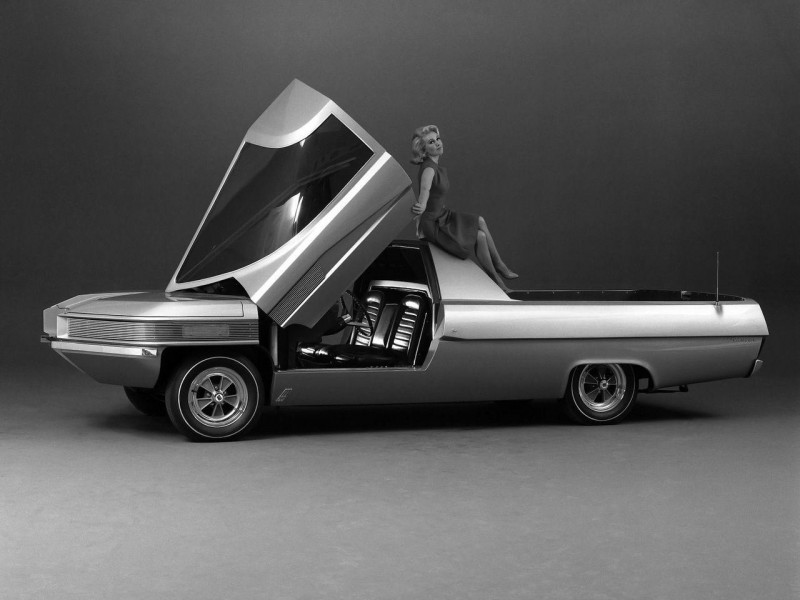 A graduate of the Art Center School in Los Angeles, he was immediately recruited by Ford’s Advanced Styling Studio. There he provided input for the 1964 model year Ford Falcon Futura (he joked later this comprised mostly of shaping the tail-lights). Prior to that, he co-created the Gyron concept ‘car’, a two-wheeled machine that purportedly employed gyroscopic stabilisers.

And then there was this, his take on the Ranchero pick-up theme, the mighty Ranger II. Based on a 1963 full-size station wagon platform, the identity of which was never disclosed, the angular load-lugger featured umpteen design eccentricities, chief among which was the means of entry.

In place of conventional doors was an arrow-shaped split canopy which pivoted forward. This styling treatment would be reinterpreted ad infinitum on concept cars in the years to come, many of them European.

Not only that, the sliding roof and other panels could be ‘flipped’ to reconfigure the Ranger II into an extended cab pick-up. Mead told Car Design News: “The small rear cab roof slid back, a rear seat unfolded, and a filler section with a window rose into position. This meant that, sacrificing bed length, the vehicle converted electrically from a bench seat, three-passenger vehicle into a five-passenger, close-coupled club sedan/truck.” 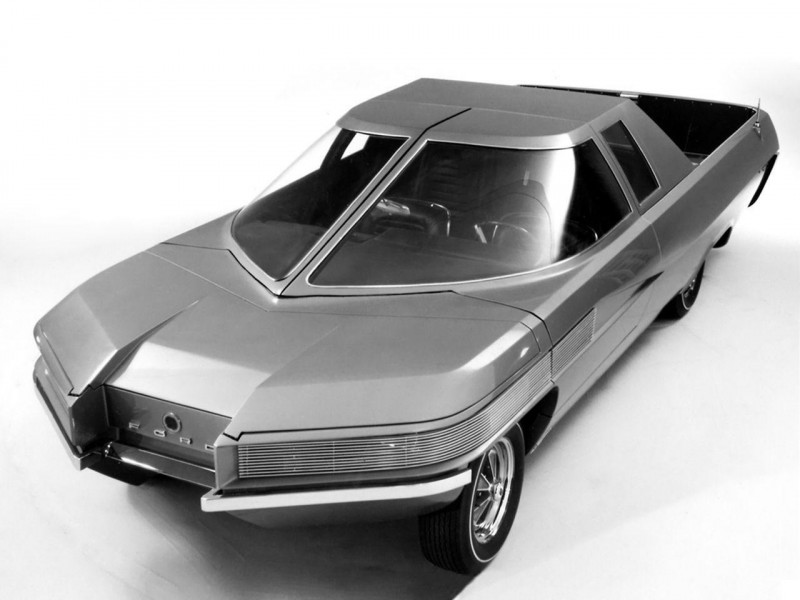 Completed in 1966, PR material from the time suggested it was powered by a 390cu in V8, complete with three two-barrel carburettors. It also boasted: “…contoured bucket seats and a host of options, including power steering, tilt away steering wheel, SelectShift Cruise-O-Matic transmission, AM/FM radio and a SelectAire air-conditioner”. It went on to add: “Ford Division’s Ranger II is an ultra-modern pick-up truck with a custom designed passenger compartment. “The Ranger II’s ultra-streamlined windshield is made of specially tempered plastic-type glass.

Resplendent in a suitably striking shade of Clearwater Aqua, Ranger II proved a media magnet following its release. However, Mead had already departed the Blue Oval by the time of its release, and some sources suggest that ‘tweaks’ may have been made to his design in his absence. However, it appeared remarkably close to his earlier renderings so this may be wide of the mark.

The sad part is that this slice of starry-eyed futurism disappeared from view after a relatively brief career on the automotive red carpet. Chances are it suffered the same fate as most concept vehicles of the period and was destroyed once it was deemed to be no longer of use.