Alfa 12C a wartime mystery. After 80 years, a unique 1941 Alfa Romeo V12 racing prototype has emerged from oblivion. Born in the midst of the war, the story of the long-lost 12C Prototipo can now – finally – be told Story by Chris Rees Images by Antoine Truchet/Sauber Motorsport

Very few chapters in Alfa Romeo’s 111-year history remain unexplored. In countless books, archives and museums, the story of Milan’s most famous car marque can be fully appreciated in great depth. But there are always tales left to tell, and the car you are looking at here is surely one of the most intriguing of all. 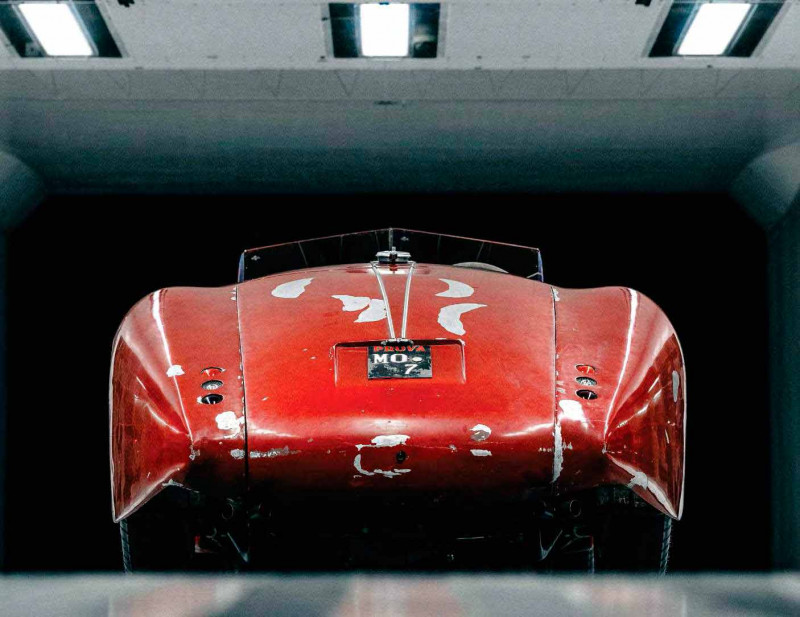 This is the story of a long-lost racing prototype, a unique V12 engine and a project developed in the strictest secrecy during one of the darkest chapters in 20th century history, the second world war. Amazingly, it has taken 80 years for its story to be told, but we can now piece together an account of what its current owner calls – in line with Alfa Romeo’s age-old naming tradition – the 12C Prototipo.

“The body is made of aluminium and magnesium, resulting in the shell tipping the scales at an ultralight 47kg”

That owner is Stefano Martinoli, an entrepreneur based in Switzerland. His passion for cars is huge, as he tells Auto Italia: “I have been dedicating more and more of my time to cars and auto culture under the umbrella of Progetto 33, including cars like the Alfa Romeo 33 Stradale and 33 Daytona. I like to find pieces of architecture that haven’t yet found their place in history and make them known, give them their due importance.”

There is no question that the 12C Prototipo deserves its place in the Alfa Romeo hall of fame. Yet its story is not easy to tell. There are facts that are known; much more is, by necessity, supposition. Above all, this is a tale of what could have been. 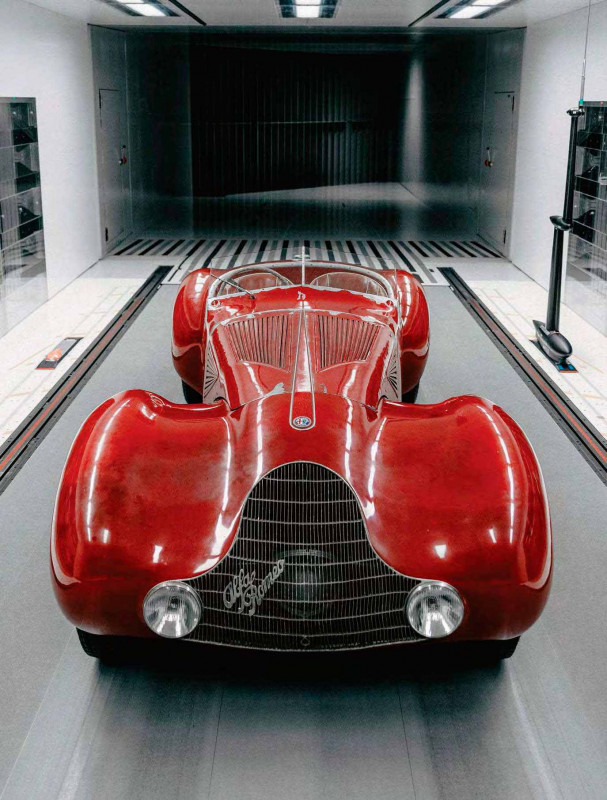 This car never even had a chance to be officially named by its creators at Alfa Romeo. Nor was it given a chassis plate. There is even a question mark over the exact date the car was made. What seems clear is that it was an unfinished prototype designed to compete in the 1941 Mille Miglia, an event that never happened because the war intervened.

“The 12C fits into my sphere of interest perfectly,” says Stefano. “I came across it thanks to a friend who knows what kind of car I’m interested in. At that time, the car was in pieces. The body had been removed from the modified 8C 2900 chassis and the engine was fitted but not working.”

Hard information on this car is difficult to come by but drawings and documents unearthed in the Museo Storico Alfa Romeo seem to indicate that it was being tested during 1940 and 1941. The clear inference is that this was a research and development car built in the aftermath of Alfa Romeo’s defeat to BMW in the 1940 Mille Miglia. Alfa’s solution was to pursue a unique 12-cylinder engine.

The capacity of the V12 engine fitted to this prototype is 3.0 litres and the stated aim was for it to develop 165-185bhp, which would surely have made it very competitive. Stefano has had the engine weighed and it’s a lightweight at 215kg.

Who designed and built the elegant body? Well, it wasn’t one of the innumerable coachbuilders that had been so active in prewar years. It seems most likely that it was an in-house Alfa Romeo project. It’s made of an alloy of aluminium and other elements such as magnesium, resulting in the shell tipping the scales at an ultralight 47kg. The shape is one of sheer beauty, typically Italian yet full of purpose for its intended competition role. That role was to try and win the 1941 Mille Miglia. But that year’s 1941 MM never happened – the reason, of course, being that the war stopped everything – and the car was never finished.

At the end of WW2, Alfa Romeo decided to consolidate its racing programme, retaining its Grand Prix monpostos but disposing of its bipostos. These included the 12C Prototipo, which was sold, together with some 8Cs, to the Swiss racing driver, Jean Studer. This gentleman driver campaigned several Alfa 8Cs in his home country during the 1940s, and he also raced this prototype between 1947 and 1951, with some success, winning at least two events.

But even then, the car was already a mongrel. At Alfa Romeo, the 12C engine had never finished its development programme. Studer was in no position to complete that programme. Unable to run the V12, he simply removed it and replaced it with an Alfa 8C 2900 engine.

This begs the question: was the V12 ever actually run in period? “We think so, yes,” affirms Stefano. “The reason is that we have found tarmac on the oil sump. Could this have been from Studer using the car? Unlikely because the engine was removed pretty much straightaway and put in a box. We surmise that it was from Alfa Romeo’s own testing of the car during the war.” The engine was prototyped by Alfa Romeo’s Reparto Sperimentale (experimental division) which was then under the guidance of Wilfredo Ricart, with designer Gioacchino Colombo a notable presence. Stefano believes the V12 has an importance beyond this sole prototype – but not at Alfa Romeo.

“It might be said that this engine changed the course of motorsport history. This V12 has a 60-degree vee and a single camshaft, quite unlike the four-camshaft 12C engines that Alfa Romeo developed for its Grand Prix cars in the 1930s. The conception is totally different: it was an engine meant for sports road racing.

“What we can say is that the engine is uncannily similar to the very first Ferrari V12 single-cam engine. Perhaps this is not surprising since Colombo moved from Alfa Romeo to Ferrari at the end of the war. Logic suggests that the ideas he had in his mind were inherited by Enzo Ferrari, who of course had also previously worked with Alfa Romeo for many years. The Ferrari 125 S with its Colombo-designed single-cam V12 was a winner from the outset. This exceptional Alfa V12 engine could be the ancestor of the one that drove the destiny of motorsport for the next 30 years.

“Of course we are not saying that the engines are the same; it’s that the technical concepts and ideas are so similar, and from the same engineers. The block was designed so that it could cope with different cylinder dimensions in the future. This kind of approach was also taken by Ferrari. This is why we call it a ‘missing link’: it links the 1930s with Ferrari in post-war years.”

So let’s wind forward to the present day, since the car has now been revived. “We decided to repair rather than restore the car where possible,” says Stefano. “The body was damaged and it was a very difficult job to repair it. It would have been much easier to strip the paint off and restore the body but then we would have lost originality. Very few cars from the 1940s have their original paint so we wanted to preserve and protect it.

“All the bodywork was repaired in Italy by the celebrated artisan, Dino Cognolato. We repaired the body in its weakest areas, such as around the lights, the doors and corners. We used a technique based on cold welding that works at under 200 degrees, as magnesium is very combustible.”

The chassis and engine, however, did need restoration. Unsurprisingly, the engine was a non-runner. As many original components as possible were kept but the the cylinders and bearings had to be renewed for several reasons, including safety, although all the original pieces have been retained in storage.

The mechanical side of the restoration was entrusted to the Austrian restorer Egon Zweimuller and a huge team of people that included many ex-Formula 1 engineers. Each team member worked on his own part, such as the bearings, cylinders and suspension. “We have put huge resources into this car, thousands and thousands of hours,” says Stefano. “This was not just a restoration. We also had to complete the engineering that had been started by Alfa Romeo but never finished. We needed to get back to the ideas that the Reparto Sperimentale was pursuing in the 1940s. I am very grateful to the whole restoration team, especially as they had to overcome the challenges presented by Covid.”

The suspension was fully restored, too, with all the tolerances carefully recalculated, since it would have been dangerous to put the car on the road without re-engineering many of the components.

The finished car was recently taken to Sauber, Alfa Romeo’s racing partner, which happens to be based in Stefano’s home country of Switzerland. “They were stunned because they’d never seen anything like this, a car that shows where Alfa Romeo racing has come from. They were very happy and even made a short film about it. This was also the first time that a classic car has ever been in Sauber’s wind tunnel and it was a honour for me to be their guest.”

It was only in late July 2021 that the process of road-testing the completed car began, as Stefano recalls: “We have tested it on quiet public roads, which was our preference because this car was designed for road racing rather than the track. It has been driven about 300km so far. It needs a lot more testing, of course: the more we drive, the more we discover about it, how it behaves, what we can do to make it better.” So how does it drive? Stefano’s eyes widen with excitement. “I can tell you, it is absolutely stunning, especially in terms of handling. It is clear that the car has been designed to cope with the demands of the Mille Miglia, with its variety of challenging roads, from mountains to villages. It’s fantastic, so impressive, the feeling between you and the machine is 100 per cent.

“In my view, the V12 engine is superior to Alfa Romeo’s 8C, which is widely viewed as one of the best engines of the 1930s. The driveability is massive compared to the 8C 2900 unit. You can be in fourth gear at 40km/h, the engine calm, not nervous, and just accelerate smoothly away. I’ve never driven anything like it – and it’s so impressive considering the technology is all from the 1940s. The engine was originally developed with one, two, three and four carburettors but, as the original drawings we found show, the final specification was three carburettors, which is what we have used.”

How does the engine sound? “Like a symphony, just like a Ferrari V12. It’s loud, too. If you rev it to 3000rpm, you really need ear defenders. The gearbox is also very easy to manage.”

The 12C Prototipo is the subject of a new book co-written by a number of experts in the field (among them Auto Italia contributor, Karl Ludvigsen). So what is next for this unique car, we ask Stefano? “After the publication of the book, we will continue testing and development in a variety of different conditions. I look forward very much to driving it more.” And what about taking part in some road events? “You know the phrase, ‘never say never’? Well we have ideas. For now, though, we are concentrating on testing. We have to be careful because there is only one chassis, one engine, one body. This is a car that’s unique in every sense.”

ABOVE: Jean Studer racing in 1949. BELOW: Prototype at Sauber. Owner Stefano Martinoli is in the red shirt.

“ We decided to repair rather than restore. Very few cars from the 1940s have their original paint so we wanted to preserve and protect it ”

3.0-litre triple-carb singlecam V12 is unique. Modern engineering has made it live again after decades.

This is the cery essence of automotive history. That book is definitely one I look forward to reading.