When an owner’s Mercedes-AMG C63 became hydro-locked, he took another older example to Arkham Performance to regain some of the lost magic – and then things got interesting… Words Mark Smyth. Images Jason Dodd.

A water-logged engine is not something anyone wants, but for one enthusiast it led to a conversation that ultimately saw him work with the team at Arkham Performance to create a Mercedes-AMG C63 Saloon that is truly tailored for him. 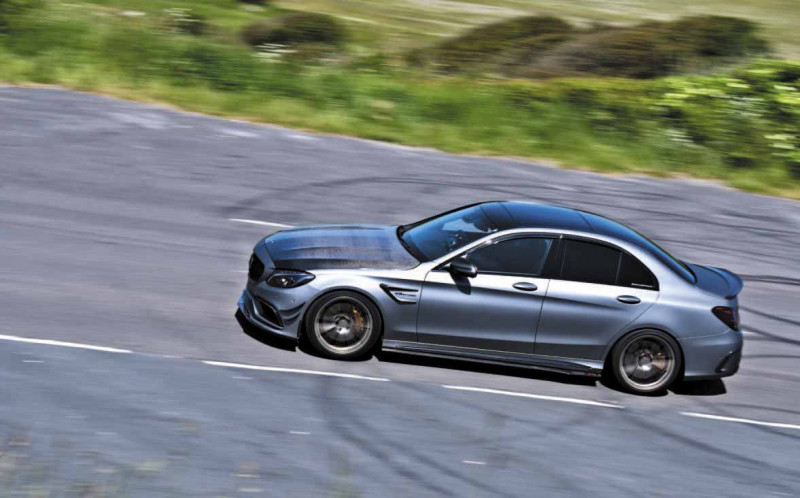 Named after the rogue asylum in the fictional city of Gotham in DC Comics’ Batman franchise, Arkham Performance was born out of Auto Upgrades in 2020. Based in Eastbourne, East Sussex, the company is owned by Nathan Clear who has over 20 years’ experience working on everything from French and Japanese cars to the latest models from Mercedes-Benz.

This particular project happened after one customer suffered water damage to his 2018 C63, a car which Clear and his small team had done some work on. Sadly, the engine was a write-off and so the customer turned to another C63 in his possession, a 2016 model. One of the things the client really wanted was the same level of visual data that he had in a head-up display in his 2018 model. In order to achieve this, Clear turned to one of his suppliers in China to provide a customised steering wheel that perfectly met the client’s needs. 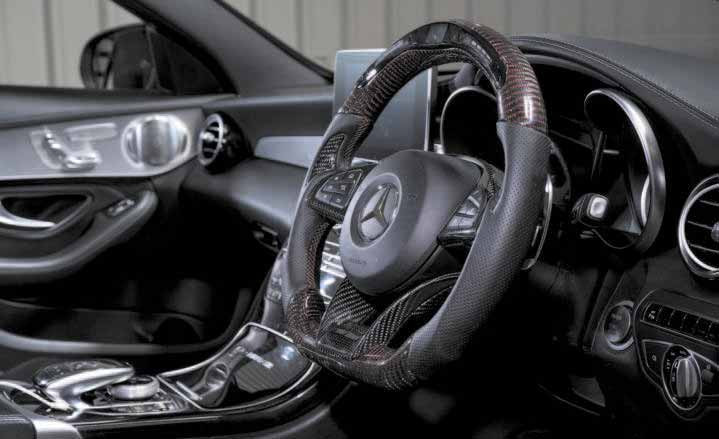 “We have a resource out there that can customise them, so you can pick and choose a flat bottom wheel, a rounded bottom wheel, a thumb imprint around the sides of the wheel, Alcantara, nappa leather, different kinds of stitching. It’s quite extensive and tailorable to each individual customer,” he says.

“Basically you code the shift lights, so you set the shift lights up to however you want to have them,” explains Clear. “Obviously, we set them up to go red just after peak torque, so just shy of 7,000rpm because the power starts to tail off a little bit after that.

“You’re able to get a digital readout of water temperatures, battery voltage and get the boost displayed, too,” he continues. “There’s a lap timer function if you’re on the track, but it’s not really a track car. There’s a couple of other smaller options – it has quite a lot of functionality.”

In this instance, the customer also wanted red carbon fibre. Not a choice Clear says he would go for, but he explains that the client wants to continue the theme throughout the car including red carbon on the centre console, which will have to be specially made because not many people offer that option. “I think we’ll also be looking at a red carbon fibre induction system if we continue to push the car forward in terms of performance,” reveals Clear.

Performance is as important to Clear as styling and he and his team are more than up to transforming not just the power but also the way a car handles. At the moment, this particular C63 has benefited from stage two ECU tuning as well as MTC exhaust downpipes with a factory AMG Valvetronic exhaust and Pipercross panel filters. Power is up slightly to 580bhp and the V8 biturbo now boasts 627lb ft of torque. The chassis has been dropped by 20mm using H&R lowering springs and 19-inch matte bronze Inspiri wheels have been fitted and shod with Michelin Pilot Sport 4 tyres.

Next up, Clear says they are talking about making it a ‘vmax’ car, tuning the engine and gearbox and bolting on larger turbos to make this C63 capable of more than 200mph. They will also be upgrading all the cooling components because the last thing the customer needs after water damage on one car is things getting a little too hot on another. That’s the next stage, but what about the rest of the styling work that has been done? Interestingly, the full matte grey metallic vinyl wrap came about because a friend of the client started working for Arkham and he was a trainee wrapper. Once the wrap had been agreed on, Clear says the project just snowballed into a complete exterior overhaul.

The customer wanted it to look a bit sinister but not overdone and that’s what Clear says they have managed to achieve.

Apart from the wrap, this C63 features a DarwinPro carbon fibre bonnet, a GTR front grille with a tinted Mercedes star, light smoke-tinted front and rear lights, and a full black badge set. The AMG brake calipers have been re-coloured in liquid bronze and then there’s a long list of carbon fibre elements, including the rear wing and diffuser, front splitter, cooling ducts and mirror caps. The side skirt extensions are also carbon fibre and feature a special Arkham Edition badge, but what defines a car that gets this badge?

Clear says he’s seen lots of bland modifications over the years and that he wanted to offer something different, both in terms of styling and performance. “It’s basically a service we’re offering to customers that want something that’s tailor-made to them – everything from interior through to exterior. Then we’ll put our Arkham Edition badge on the back of it,” he adds before confirming that feature is saved for special projects involving much more than wrapped bodywork, for example.

It’s not all about customers creating their own specification, though. Arkham recently moved into brand new premises and the next stage of the company’s development is launching an online shop. This will not only provide access to a wide range of products, but Clear would like to get to a point where customers can select one of various Arkham packages such as a handling pack or a styling pack, designed to suit a specific vehicle and featuring the best components Clear and his team can offer.

Many of these will be geared towards Mercedes models, with the C63 easily the most popular that the team at Arkham work on. It’s followed by the A45, but Clear says that they’ve also been doing some work on newer A35 models recently too, and that they’re keen to expand their work throughout the Mercedes line up, although they do work on other marques as well.

For now, the team at Arkham Performance are taking business to the next level, even wanting to provide some sponsored products for those who fit the right profile but that’s just one part of their strategy for the future. “‘Vehicle enhancements for road and track’ is our motto,” Clear explains. “We are aiming to be a complete in-house one-stop shop for anything if you like your cars and you want to improve performance, handling or styling.” It’s also about building a business that started during the pandemic. It wasn’t quite the launch that Clear and his team wanted, but now he is confident he has everything in place to fulfil his dreams for the business and deliver the best products and service for his customers, whatever they may need.

Once the wrap had been agreed on, Clear says the project just snowballed into a complete exterior overhaul.