The Daimler 3.6 was once the pride of the pack; today, less than 50 remain taxed and in use. The flagship XJ40 is now a seldom seen scarcity… A rare beauty.

A rare survivor of an early XJ40 Daimler

This profile of a very early and, therefore, rare Daimler-badged XJ40 3.6 from 1987 explains the differences over the Jaguar model.

When Jaguar revealed its XJ40 model in 1986, the message it put out was one of avant-garde modernity. This was its most technologically advanced model, ever. Indeed, it was one of the most forward-thinking and progressive cars in the world. And it also presented a problem. 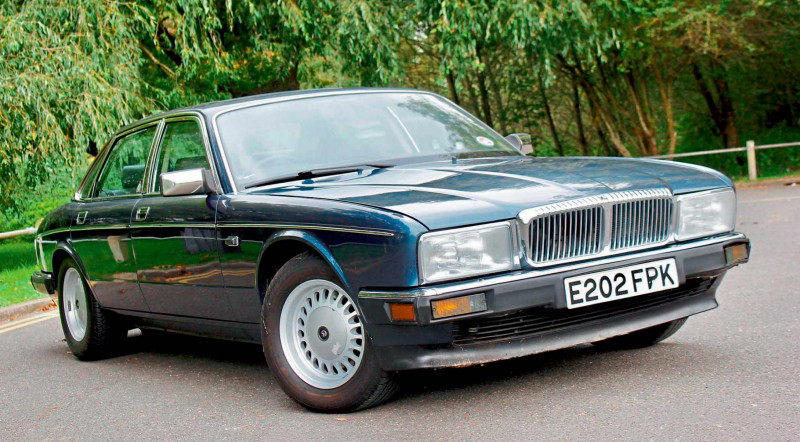 It was a return to form for Jaguar, which in its innovative early years had always been ahead of the pack, but three decades of British Leyland ownership, poor management and underfunding had allowed it to slip behind, so much so that the Series 3 XJ6 that was on sale right up until the XJ40’s launch could trace its roots right back to the first-generation model of 1968. For a company founded on progress, Jaguar hadn’t made much of it in the previous 18 years. The XJ40 – equipped with more wiring than found aboard a Boeing 747 jumbo jet, according to Jaguar’s somewhat boastful early marketing material – would change all that.

Sure, it was instantly identifiable as an XJ6, most notably in its profile, but it also embraced the square-edged styling and computer-led design trends of the Eighties. It was also hugely advanced inside, with solid-state digital instruments and a dot-matrix trip computer. Laughable as these may seem 35 years on, when we have apps to preheat our cars in the morning and even lock them should we have forgotten, back in 1986 this was the absolute pinnacle of technology.

But, the thrusting and modern marketing message presented an awkward juxtaposition for Jaguar, for at the top of the XJ40 model range was the Daimler derivative – a car that was on the one hand a technological tour de force, but on the other was one of the oldest and most traditional names in motoring history, one that appealed to a somewhat more elderly demographic than those the Jaguar variants of the XJ40 were targeting.

It was – by necessity – a fusion of traditional and modern. A car aimed at Jaguar’s more old-fashioned, often more mature customers, despite being the flagship model in its all-new and extremely forward-looking range.

But then, Daimler’s association with Jaguar was always a peculiar one. Not to be associated with the Daimler company that owns Mercedes-Benz, the company was originally a completely independent British operation that used the name under licence. In 1910, the company was bought by the Birmingham Small Arms company (BSA), better known for its motorbikes, before being bought by Jaguar in 1960.

The first Daimler to share its platform with a Jaguar was the 2.5 V8 of 1962, with a small-capacity 2.5-litre V8 engine of Daimler’s own design fitted to the body and chassis of the Mk 2 saloon. Distinguished by its fluted grille, split front seat and standard automatic transmission, the 2.5 V8 was marketed as a luxury-oriented alternative to the Mk 2 sports saloon – a theme that would continue until the last appearance of the Daimler name on a Jaguar vehicle in 2005, the X350-based Super V8. 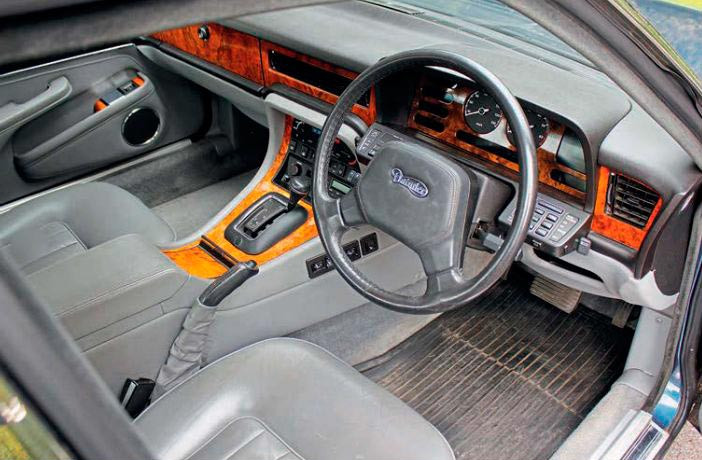 When the XJ40 appeared in 1986, the Daimler’s position in the line-up was clear. It was to be something a little more exclusive, rather than the upmarket trim level that the Daimler Sovereign had become during the Series 3 gestation of the XJ6.

But, for the XJ40, the Sovereign name would disappear altogether – at least from the Daimler. It was used as the upmarket trim level on Jaguar derivatives of the car, but the range-topping luxury model was known simply as the Daimler 3.6.

It was distinguishable from Jaguar models by virtue of its ‘fish-tank’ rectangular headlamps and fluted radiator grille, though there were other Daimler-defining features as well. The matt black boot plinth (deleted by 1988), darker rear light clusters with chrome surrounds, fluted chrome boot trim, D-motif wheel centre caps and a chrome rubbing strip along the flanks of the car were other distinguishing factors.

Inside, the Daimler was the very essence of luxury. It had a thicker, higher-quality grade of leather compared with Jaguar models, with fold-down walnut-veneer picnic tables in the rear and Lambswool over-rugs, plus a leather-rimmed Daimler steering wheel, while the rear seat was split into two separate chairs, with an elaborate centre armrest that folded down in front of a wood-veneered oddments tray – though a traditional three-seater rear bench was offered as a cost-free option for those who needed a five-seater. Uptake was rare – this was a car for older, wealthy bottoms, not young families.

The seats in Daimler models were not only a better quality than those fitted to Jaguar variants, but also featured a fluted appearance that echoed the style of the radiator grille and rear boot plinth, complemented by high-quality burr walnut inserts, with additional fillets around the window buttons on the doors.

The door cards were also fully trimmed in leather, and all Daimler models were given a large, sliding metal sunroof as standard. Neat foldout reading lamps on the inside of the D-pillars were another special Daimler feature.

Even the boot was luxurious – fully carpeted, with a flocked spare wheel cover and stylised attaché case tool kit.

Indeed, the specification was fantastic – standard equipment included air conditioning, metallic paint, cruise control, headlamp power wash, electrically-adjustable heated mirrors, self-levelling rear suspension, eight-way adjustable electric heated front seats and a top-of-the-range branded Clarion radio-cassette player, the cassette deck flap being the only place in the car where the Jaguar Leaper was immediately visible. Re-engineering such a small component for Daimler was clearly a cost too far in the XJ40’s development. At launch, the Daimler 3.6 had a list price of £32,000, which was £4,000 more than the top-spec Jaguar 3.6 Sovereign. In today’s money, that’s £80,355.

The Daimler was sold across European markets and Australia, but was never sold in the USA, where the brand had no recognition. Instead, the equivalent model was known as the Jaguar Vanden Plas, and featured the same specification and interior treatment, but minus the fluted grille.

The car we have here is a 1987 model from the first 12 months of production, which was unearthed early last year by its owner, Stephen Bartlett, who was made aware of it by a friend. The car had been parked up in a garage in West London since the owner retired from driving a few years previously and was thick with dust, but with only 61,000 miles on the clock and a rot-free underside it was well worth saving. Stephen extracted it, cleaned it up and did the necessary work (of which there was very little) to get it through an MOT test, and has used it this summer for shows and events.

It’s a rare car, too – being a really early Daimler, it has features such as the pop-out reading lamps and vanity mirror inside the glovebox lid that were removed from later models as a cost-cutting exercise, along with the rare black boot plinth, and it still rides on TD metric alloy wheels. Inside, it feels as special today as it would have done in 1987, albeit in a more retro fashion.

The green LCD dials are very much of their time, but they provide an interesting contrast to the more traditional Daimler accoutrements of wood and leather and the associated smells that go with them. Stephen’s long-term plan is to treat the Daimler to a cosmetic restoration. Apart from a small patch of rust at the bottom of one wing, a creased bumper corner and some scratches on the edge of the bootlid, it’s really not bad at all – a well looked after and original example that was an incredible find, and will look amazing after some carefully applied TLC.

The Daimler 3.6 was sold for four years in total, it being replaced in 1990 by a new 4.0-litre-engined model as Jaguar evolved the AJ6 powerplant.

The model accounted for around 3,500 of the Jaguar XJ40s sold in the UK – a relatively small number of the overall production figure, but one that was hardly surprising given the car’s rather grandiose price. But, as with all luxury cars, the older the XJ40 got, the less the specification seemed to matter; the price margin between a standard Jaguar and a Daimler 3.6 got ever slimmer, to the point of being non-existent.

There was a time – not so long ago – when XJ40s were bargain bangers, and if you were lucky enough to find a Daimler 3.6 you ended up with a very posh banger indeed, but not a car that you bought to cherish or preserve unless you were a Jaguar enthusiast. It’s a situation that has thankfully changed.

Sadly, that era saw the demise of thousands of XJ40s. By the summer of 2021, less than two percent of the Daimler 3.6s registered remained taxed and in use – just 49 cars in total, with a further 147 declared SORN off-road (source: www.howmanyleft. co.uk), making it one of the very rarest examples of Jaguar’s Eighties flagship.

That makes it a top investment today, and with XJ40 values already on the up, it’s bound to be a collector’s piece in the future. It deserves to be. It’s a fascinating and wonderful car that truly defines its era.

Thanks to: Stephen Bartlett Uptake was rare – this was a car for older, wealthy bottoms, not young families

Firstly, I want to welcome in the new editor. It’s a shame to see Paul Walton leave, but it seems he’ll still be writing for the magazine and fresh faces are always a good thing. I was moved to write by Sam Skelton’s piece about the 2.9-litre XJ40. This is a car that so many people over the years have told me was utter rubbish and that there was no point in owning such a slow and thirsty car. But I bought my first one in 2005 – I was still a university student, which shows how cheap they once were. And I didn’t keep it for long, because it failed the MoT on rust in 2007. I’ve had other Jaguars since, and nowadays I have an X350 2.7 diesel. But I’d like to find another good 2.9 if I can find one to relive the days that got me into Jaguars. Ideally it’d be Signal Red like mine was, a manual, and have a cloth interior. My car had a digital dashboard, so I’d like that if I could. Does anyone know of a car like this for sale anywhere? Thank you to Jaguar World for rekindling an old spark with your article. 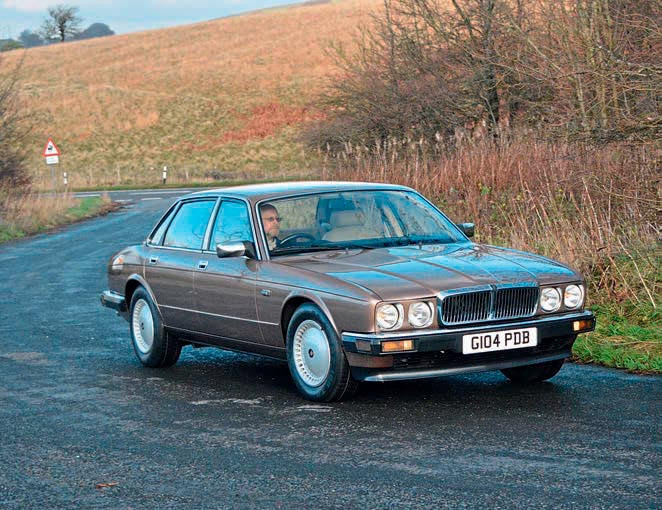