Looking for all the world like a works rally car – and driving like one too – this clever custom Fiat 124 Coupe in fact borrows from the 124 Abarth Spider Rally playbook. Story by Simon Charlesworth. Photography by Michael Ward.

FIAT 124 SPORT COUPE: THE RALLY CAR THAT NEVER WAS

In the hot seat of a classic rally car tribute

The bucket seat feels as snug and forgiving as a bench vice. The top-hinged pedals are so close to one another that they appear to be more than just friends. The hydraulic handbrake is close to the balltopped gear lever. My noggin has just lost an argument with the rollcage. I know this is going to be intense. 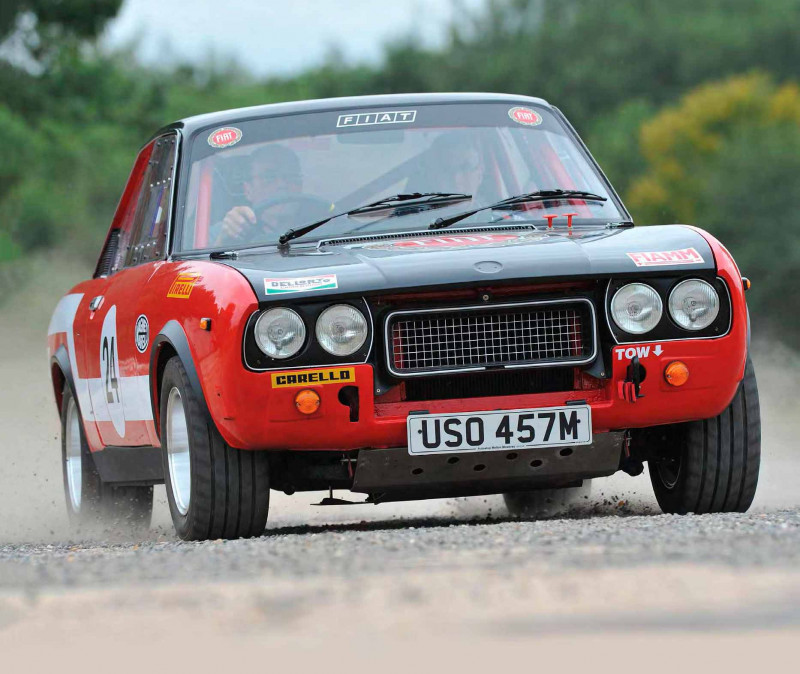 On initial approach, you have one question: did they or didn’t they? You have to think twice when confronted with a Fiat 124 Sport Coupe wearing works-style battle-dress. The fact that Mark Bendle’s 1974 example pays tribute to the grimy ’n’ gritty Gp4 career of its Spider sister, is what catches out people such as me, who are not so clued up on Fiat history. That this 124 CC so successfully sports the Abarth Rally’s early 1970s style — when the classic red and black livery was joined by broad white stripes along the flanks — is key to the confusion. It looks so right that it has to be, er, right, right?

“The classic red and black livery with white stripes looks so right that it has to be, er, right, right?”

The CC was the third and final incarnation of the 124 Sport Coupe. You can certainly argue that the 1967 AC original — an inhouse design by Felice and Boano at Centro Stile — was visually the closest to Pininfarina’s Sport Spider, but this link was severed by the 1969 BC that clearly drew more style inspiration from its big Dino 2000 Coupe brother. Produced from 1972 to 1975, the CC’s makeover entailed several detail differences, with the most obvious being the new deeper front grille — emphasised by the front bumper dipping beneath it — and at the back, a more accessible boot, another new bumper and different vertical lamp clusters. Meanwhile, the shape of the side rear windows was also revised.

The 124 also experienced a raft of engineering improvements throughout its life. In terms of press reviews about the Coupe’s handling, the AC was enthusiastically received, the roly-poly BC widely criticised, while the heavier CC did manage to recoup some of the original car’s lost finesse.

Mark has owned this 124 CC for a considerable time. “I bought it back in 1983 and I drove it for a number of years until I gave it to my brother when my family came along. He drove it and restored it over a number of years, before eventually giving it back to me in around 2000, by which time it was in a really sorry state. Then about four or five years ago, I decided to restore it.

Originally, I thought about doing it as a road car but I decided to do it as a rally car because I’d put so much new metal in it. “It was pot luck that my first car was a 124 Special and then I had a couple of 124 Special Ts, which got me into the whole Fiat twin-cam thing. At the time, they were real wolves in sheep’s clothing. A lot of people were buzzing around in Mk2 Escorts but the Fiats were better in some respects. I had a few 124 CCs, two BCs, a Lancia Fulvia. With the family, things went on to the backburner but as we get older, we tend to regress to our childhood. I retired a couple of years ago so I had the time. I’ve got loads of knowledge on this particular car, various 124s and shed-loads of bits, so it just made sense. I’ve got three of these at the minute. You tend to stick with what you know!”

Of course when the rot gets the taste for Italian tin — and it doesn’t need much invitation — then it does lose all self-control. The floorpans had disappeared, front and rear scuttles needed addressing, and where the doors attach to the A-pillars they had to be refabricated. The front suspension turrets were brought back to life, work in and around the boot was extensive, and both the bootlid and bonnet needed to be patched. Which is enough just to make you tired, just reading it all.

Mark adds, “I used thicker metal in the floor and the chassis sections than normal because, as a rally car, it would gain some strength — plus this was all seam-welded rather than spot-welded, as per the original cars.”

You’ve done all the work yourself then? “Yes, including the painting! The livery is a copy of the 1973 works Spiders, although they varied slightly. That was the theme plus a few extras to fill spaces — like the scorpion on the boot — which weren’t on the works Spiders. I really wanted it to try and make it look period, so the badges on it relate to sponsors or equipment from the time.

“The wheelarch lips are wrapped and the wheelarches are filled with 7x13in wheels. I’ve converted the hubs from bolts to studs and I’ve got an original set of Cromodora 5.5x13in wheels fitted with gravel tyres. The only things I haven’t done myself are put the cage in — I had it made up and then fitted by Allan Weston in Yorkshire, so I’ve got the certificate for it — and the rolling road and carburettor tuning was done by Martin at Maynard Engineering in Stroud.”

The base of this CC’s engine is standard. It’s the high-compression 1756cc unit that these third-gen cars shared with the Fiat 132. However it’s running BC cams, side-draught Dell’Orto 45DHLA carbs and a large-bore exhaust. An electronic and mappable distributor has been fitted, and it aids bottom-end torque and drivability. The point of fitting BC road cams is to increase the twin-cam’s top-end performance — making it capable of 6400rpm — although they are not quite so talented at doling out low-down torque. It’s a niggle which is partially remedied by the clever dizzie. In terms of power, it has experienced quite an increase from its original 118hp to somewhere in the region of 130hp.

Given it has a rally logbook, has Mark managed to ‘blood’ it? “I haven’t done an awful lot in it yet. I finished it last year and of course lockdown meant that there was nothing happening. I’ve got plans to take it to various demonstration events — I’m a member of Slowly Sideways UK. I have a couple of other cars which are eligible for that (an ex-Works Gwyndaf Evans/Tony Jardine MG ZR and one of the original 35 Rover Dunlop Turbo ‘Tomcat’ circuit racers) so this one tags along with them. I’m hoping to do a couple of events there. I might do the odd road rally with it, but I won’t rally it competitively because it will just get smashed to bits and I haven’t got the money. So really it’s just a fun car.”

That penultimate sentence rings in my head as I start the 124 CC. The twink snarls into consciousness, as if awoken by a selfish neighbour. At slow speeds, you are presented with gargling carbs and a spicy exhaust note that is accompanied by a cheeky drop of gear whine. The gearbox is standard, so the keening must be coming from the Lada plate-type limited-slip differential.

The situation is made all the more obvious by the battered access track which has to be negotiated. We are peppered with bangs and clatters from the poly-bushed suspension – which runs modified Lada springs and Spax adjustable dampers – before we are let loose on the sunlit uplands of the tarmac nirvana that is… well, the road. A road filled with sexy off-the-shoulder bends, esses and apexes all interspersed with titillating straights which goad your right foot into the fully flexed position.

All this dawdling and pootling takes time. What little dashboard trim there is, is largely original, except for a fabricated aluminium panel at the bottom of the centre console. This provides a home for the MSA-required operating switches for both the electrical isolator and fire extinguisher.

As speed builds, grit and gravel starts to ping and zing off the 124 CC’s belly. The Perspex windows shiver and rattle. The heady scent of petrol reminds you of the internal brake and fuel lines, the uprated fuel pump and the alloy tank in the boot. The steering ticks all the necessary boxes: feel, gearing, and the right amount of heft. Roll is so well controlled. it’s hardly perceivable, while grip is plentiful. As yards become miles, it is possible to enquire, probe and tease. Corners can be tackled with glorious neutrality. Alas, the increasing traffic means encouraging the rear to step out is not on the cards. Nor is it necessary, as imperfect surfaces make the Fiat quiver and tramline, and the Momo wheel rim tremble and fidget. The grooved discs and Bendix callipers with competition pads take some investment from your right thigh. In fact, most of the controls require a little bit more oomph than you would imagine.

The cabin is filled glorious noise. As the short-stroke Lampredi’s hectic cacophony swells in volume — bullying your ears and slapping an instant devilish grin on your chops — it is dominated by the induction and backed up by a deeply funky exhaust note. The engine does feel happier up here rather than down there, where it tends to fluff and grump around at idle. The five-speed gearchange is quick and slightly notchy. You can’t help but pump up and down these closely stacked cogs.

At 60mph in top gear, the twink is spinning over at 3500rpm. The 8000rpm white-through-black Veglia tacho is decorated with a thin streak of yellow just past 6000rpm, before turning red at 6500rpm. The fun zone is above 4000rpm, when the twink starts to sound manic and almost possessed as the 124 CC comes on cam. A glance at the speedo reveals that all this entertainment is possible at sensible speeds, making it a hugely enjoyable and suitably quick car for the road. You seldom need more power than this, when it’s served up so enthusiastically.

Inhaling, experiencing and indulging in the motorised glories of yesteryear — an analogue, more egalitarian time. This Fiat is like that childhood mate who wasn’t perfect but great fun, yet your parents always disapproved. This 124 CC is proper driving.