The collection of Milan-based Architect Corrado Lopresto ranks among the best in the world. The Key — an annual which ranks individuals based on the value and provenance of their collections — placed Lopresto at 22nd: more significant than Andreas Mohringer, but not quite so important as Ralph Lauren. Though, if you are like me and think a list is just another divisive tactic to get people arguing over something they might normally bond over, you can appreciate the life’s work of Corrado Lopresto for what it is: an immense and valuable tribute to Italian automotive design.

1978 Lancia Sibilo concept car designed and built by Bertone, and based on the production Lancia Stratos, but 4 inches longer. 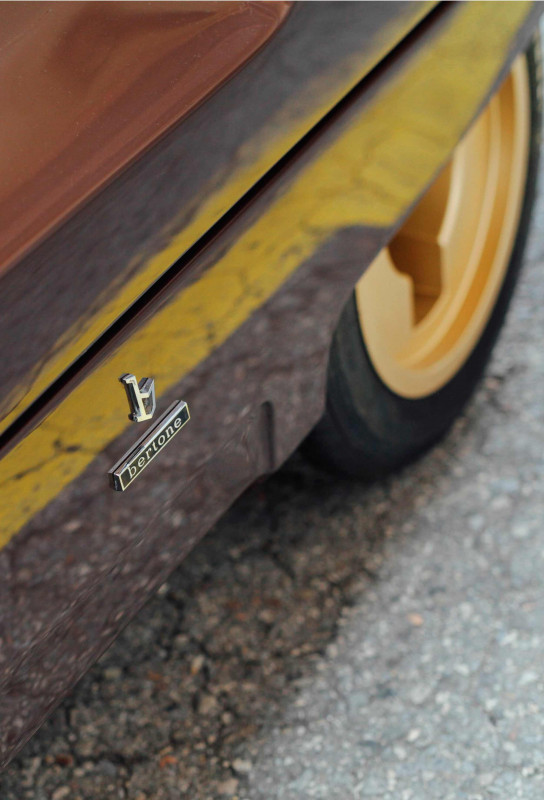 Not that he would remember, but I had the privilege of sitting next to Lopresto at the first International Historic Motoring Awards in London, back in 2011. Positioned between me and fellow Collector Nicola Bulgari, I was taken by Lopresto’s authenticity and genuine interest in sharing his automotive passion with a complete nobody (me, not Bulgari!). Ten years on, I know that authenticity is important to Lopresto, and it is a trait which is reflected throughout his collection. With a penchant for all things Italian — but, in particular, Alfa Romeo, Lancia, and Fiat — Lopresto’s collection ranges from the eye-wateringly gorgeous to the devilishly sexy… and the Lancia Sibilo is neither of those things.

Okay, that is probably a little unfair — beauty is in the eye of the beholder, right? So, when Lopresto purchased this unique treasure at RM’s Villa d’Este auction in 2011, he clearly had something in mind. Brutal in form, the Sibilo is far from conventionally pretty, but it is an important piece of the puzzle which Lopresto has been assembling: the curation of, arguably, the most important collection of Italian prototypes in the world. And, as far as prototypes go, the Sibilo is right up there.

1978 was the final year in the limelight for Lancia’s world-beating Stratos. With 18 World Rally Championship wins under its belt, its dominance was undeniable; and its design, even three years after it ceased production, still managed to keep pace with the “wedges” which dominated the offerings of other premium and exotic car marques. But it was still two years before development commenced on the 037, and Lancia needed something to keep the “spirit of innovation” alive at that year’s Motor Show circuit.

So Bertone launched the Sibilo on their stand at the 1978 Turin Motor Show. Named from the Italian word which describes the hissing sound an object makes while traveling through the air at high speed, it was a genuine super-car concept: based on a Stratos chassis and powered by the iconic Dino V6 engine. Unsurprisingly, it was designed by Marcello Gandini: the hand responsible for not only the wedge-shaped Stratos and Fiat X-19, but the Lamborghini Miura and Countach. However, in this exercise, Gandini chose to take his decade-long exploration of the wedge to an extreme.

While you can see the lines of the Stratos subtly echoed in the Sibilo — for example, the squared-off front wheel arches — this car really had its roots in Gandini’s earlier concept designs for Bertone; and can be considered the logical conclusion to the exploration which began with the Stratos Zero and continued through the 1974 Lamborghini Bravo and 1976 Alfa Romeo Navajo. According to the Lopresto Collection’s Historian and Manager Michele Casiraghi, “the Sibilo is the last concept car from a series of studies on a monolithic shape for a car”. Plus, the most extreme!

At a time when brutalism was beginning to fade as a key influence in Architecture, Gandini’s design followed many of its key tenets: characterized by a monolithic and rigid geometry, that eschewed artificiality and lightness. Key to its design was to look as if it has been crafted from one single sheet of steel — with no discernible seams — and a blending of materials, the polycarbonate windows lying flush with its surface. For him, at least, the shape of the windows, their total surface area, and the way in which they blended with the bodywork aesthetically, would determine a car’s personality. To blend them completely with the bodywork — though extreme — would give the car a more uniformed look.

With gaps filled and painted over, the steel looks to merge with the windows almost metamorphically. Then, to drop the windows down would destroy the illusion: allowing for ventilation, Gandini crafted clear circular “portholes”, that would pop inward and slide forward on rails. Rather than being separate, the front bumper was integrated into its hand-beaten steel body; a thin orange line providing definition and separating it from the pop-up headlamps. Finally, the body was draped in an oh-so-1970s dark brown — a darker color at launch than its present chocolate brown — with gold wheels, originally made of wood, appearing beneath squared arches.

Beneath its austere body, was the skeleton and heart of the Stratos; and, while its chassis was lengthened by four inches, most of the mechanicals remained unchanged. The mid-mounted 2.4-liter Dino V6 boasted 190 horsepower with air to the engine bay provided by two roof-mounted intakes. According to records held by the collection, the powerplant was not a production unit, but believed to be an ex-racing engine from Scuderia Ferrari — as evidenced by its #829A0C0 code (rather than #829A000) — however, performance was purely theoretical.

Could it have been a spiritual successor to the Stratos Stradale?

Casiraghi said: “It is a car not meant for driving. In fact, the windscreen is barely transparent: due to the brown shade of all the bodywork and glass. If you add that, the cooling is almost zero, and the car can drive [a few football fields] before stopping to cool down (in a cloud of white smoke). You understand that that is not comparable to a normal Stratos. But the feeling is, of course, amazing — like driving a car from the future, still today!”

Inside, the Sibilo is an exercise in minimalism. At first glance, I am not sure how to approach the solid steering wheel; that — while channeling George Jetson — is, apparently, ergonomically designed to suit the most-natural driving position. The center-mounted controls — reminiscent of a modern Formula-1 car — are very simple, I am assured, and are paired with a five-speed manual gearshift. An array of LED instruments inlaid in deep cuts in the dashboard aimed at the Driver — that could have been inspired by the Argentine Painter Lucio Fontana. And, for those who are less than six-feet tall, the pedals are quite a stretch! Put simply, it is more sculptural than functional.

Later, Bertone’s car designs — like the Mazda Aria or Volvo Tundra — reflect some of the spirit of the Sibilo: but this is Gandini at his most outlandish; and, arguably, at the height of his powers. Two years later, he would leave Bertone.

At more than 40 years old, the car is perhaps more than 40 years ahead of its time; and, while it is impossible to imagine such a car being put into production without wholesale design changes which would erase all its wonderful peculiarities, it has certainly made an impact on popular culture. The Sibilo has been credited with inspiring the design of cars in the 1990 feature film Total Recall — starring Arnold Schwarzenegger — and one does not need a great imagination to see its design cues reflected in the 2019 Tesla Cybertruck concept. Even the seamless painted windows and merged materials have been revisited in recent concepts — including the 2016 Opel GT and the Mercedes-Benz Vision EQS.

Casiraghi said: “It’s something so futuristic, still today, which attracts a lot of attention. Many people barely recognize the front from the rear. And even more when you move it because it doesn’t look drivable at all.”

The car is not perfect: It has patina for miles and that is exactly how Corrado Lopresto likes it. Many of the cars in his collection have, over the years, been restored sympathetically with a view to preserving their history — rather than eliminating it. The Sibilo might not be one of Bertone’s finest milestones — like the BAT Trilogy or Stratos Zero — but it does mark a time and place in design history; and Lopresto and his team have worked hard to ensure the car is recognized and remembered. 2011 presented a unique opportunity for one of the world’s most important collections to acquire a special show car with an iconic design, that just happened to fit its owner’s objectives perfectly. And, for those reasons alone, the car is in good hands.

Article type:
Review
1978 lancia sibilo1978lancia sibilolanciabertone
—
81
Write a comment
No comments yet. Be the first to add a comment!