The UK’s foremost modern-classic BMW collectors have an eerie ability to find improbably original low-mileage examples. This boxfresh 740i proves it: these grandmasters of Bavarian metal have glitched our concept of reality once again… Words: Dan Bevis. Photography: Jason Dodd.

The 7 Series that offers the ultimate in 1990's luxury

Grandmaster Glitch Surprising as it may seem, the dystopian sci-fi action thriller The Matrix came out a full twentytwo years ago. And goodness, how we’re belligerently marching toward the film’s central themes becoming reality these days. Perhaps not the humanfarm element, but the veneer of an imagined reality is looking like an increasingly attractive alternative to an existence studded with all the stressful stuff we’ve been dealing with recently. Those of you who are fans of the movie may recall the car that Morpheus and his crew drive around in when they’re inside the Matrix – it’s a 1965 Lincoln Continental: long, low, mean, hardly incognito, giving off tangible waves of menacing gangster vitriol. 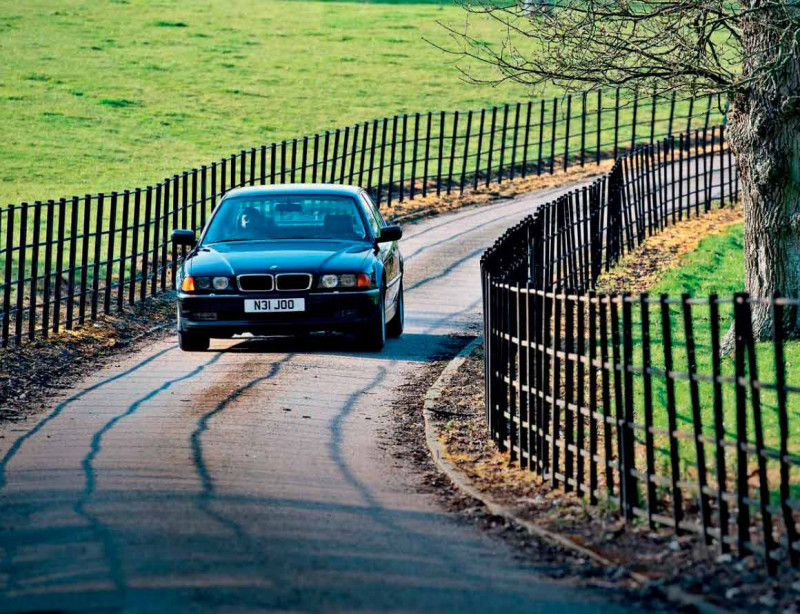 Now, imagine if that film had been made a couple of decades later, and set in Europe rather than the US. (It’s a stretch, yes, but go with it.) What might the last remaining conscious humans be cruising about in? A Merc 600 Grosser? Possibly, although we’d like to think it’d be something more like this E38 740i. It just feels very Matrix-y, doesn’t it? It’s bullishly in-your-face, and wilfully offbeat among the everyday traffic of 2021.

There’s a certain tangible brutality to cars like this, be they owned by the Mafia, the Yakuza, gritty East-end crimelords, or the fellas running operations in South Central LA: these motors are imposingly big, low, sleek, shark-like in their menace. They pull off the neat trick of being simultaneously stealthy, with their inky-hued colour schemes and impenetrable glazing, and ostentatiously showy; a demonstration of wealth and status. Because that’s what being a gangster or outlaw is all about. Sticking it to the man, then slipping away into the night. 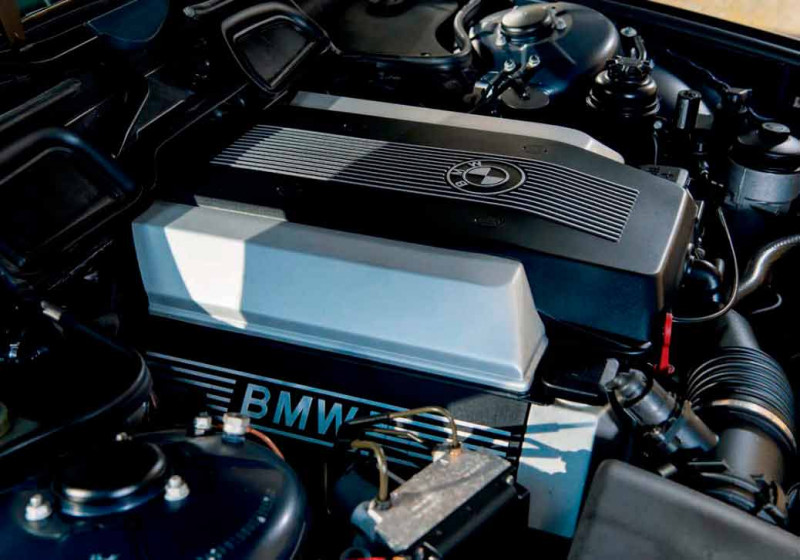 The Morpheus figure in this particular tale is Tahmid Haque, who regular readers may recall is something of an aficionado when it comes to tracking down and scooping up pristine examples of modern-classic BMWs. Early in 2020 we featured his E30 325i Sport, followed later in the year by the 840Ci E31 and 850CSi E31, all of which were absolutely stellar examples of the breed – and that small selection barely scratches the surface of the ever-growing collection. Hunting the classifieds along with his father, Kiron, the dynamic duo are rapidly positioning themselves as the UK’s premier BMW collectors, and with the gangster-chic E38 they’ve brought along today, it’s immediately obvious that they’ve struck gold once again.

“Being keen collectors of the 1980s/1990s BMW range, there was still one model we hadn’t got our hands on yet… the 7 Series,” Tahmid recalls with a grin. “The aim is to have some of the best examples of each model, and we hadn’t yet purchased or even looked at any 7 Series. So we started thinking about the E32 and the E38; it had to either be a 740i or a 750Il, and these cars are still quite undervalued and you can pick them up for a good price. And so the search began!”

Thankfully the search didn’t entail surfing metamorphosing swathes of fluorescent green digital code or battling against enormous terrifying metal tentacles – or so the fellas tell us, anyway. In fact, the 740i you see before you found its way into Tahmid and Kiran’s hands fairly organically: “The car was actually mentioned to me by a good friend, who saw it at a garage in Loughton,” Tahmid explains. “He sent me a photo of the 740i, and told me that it was a one-owner car with only 11,000-miles from new. I knew right away that this was the one for me! Straight away, I spoke with the trader who was prepping the car for sale and photographing it for the advert; I told him there was no need to advertise the car as it was exactly what I was after and I was sure a deal could be done.”

Visiting the garage a few days later to inspect the BMW, it turned out to be exactly as good as expected. Everything you’d hope for from a one-owner/low-miles example in fact, right down to the flawless original paint, unmarked interior and fully-stocked spec list. The engine bay was ludicrously clean, looking for all the world like a brand new car (which is understandable, given how the thing’s barely been used), and all the 7er really needed was a good polish to get it showroom fresh. Oh, and a new set of tyres – because, somewhat incredibly, it was still wearing its original rubber from the mid-nineties!

“The car really is like a time capsule, and looks as if it just rolled off the lot,” Tahmid enthuses. “It has evidently lived quite a sheltered life; being in single ownership from new and garaged all its life, it hasn’t needed us to do much to it at all really. All I did was to get some new Michelins, and a wheel alignment to get it riding perfect. And people’s jaws just drop when you tell them that it only has 11k on the clock – they just can’t believe it when they look at the interior.”

In period, the E38 made for a magnificent purchase proposition, as its full-on plutocrat spec meant that it came equipped with a frankly outrageous array of toys and technology. This model was BMW’s first to offer satellite navigation and an on-board television as options, and further excitement was stirred up by the possibilities of auto-levelling xenons, Electronic Damper Control, Active Comfort Seats, rain-sensing wipers, curtain airbags, a power moon-roof, and dual-zone climate control. Buyers could spec double-glazed windows, or even bulletproof glass. A heady stew today, but a near-impossible level of luxury and opulence back in the Britpop era.

Suffice it to say, all of this timewarp splendour has acted as something of a gateway drug for these irrepressible collectors. “Having bought this 740i a few months back, it’s really helped to swell our enthusiasm for E38s and big barges,” Tahmid smiles. “We’ve now also bought a 750iL that’s an ex-motor show car. Being new to the 7 Series model, I really didn’t know what they were all about until I bought these two; the options these cars carried back in the day were immense, and still very impressive to this day… from tray tables, vanity mirrors, and heated rear seats all the way to the double-glazed windows, these cruisers had everything you could think of and then some. Following the purchase of the 750iL, we bought something totally different – a black Bentley Eight with cream leather. And more recently, we completed the collection of ultimate 7 Series with the addition of an Alpina B12 6.0 Individual; the only one they ever made in Mora Metallic, and the most expensive too. Having gone from never owning a 7 Series to owning three of the very best out there, I think it’s fair to say it was a successful hunt!”

Yep, the man’s probably got a point there. And the more we pore over this improbably pristine 740i, resplendent in flawless Orientblau Metallic paint and smelling like it was built last week, the more we’re convinced that Tahmid and Kiran must be manipulating the scrolling green code of reality somehow. Surely it can’t be possible to keep finding such perfect examples of these desirable cars?

They’re evidently operating on some higher astral plane than us mere mortals. We’re convinced of it. No E38 is this tidy in 2021. This 7 Series is clearly a glitch in the Matrix.

THANKS Belmont House for the use of their beautiful grounds for our photoshoot. Belmont House is located just outside Faversham in Kent, an 18thcentury mansion situated within 3000 acres of historic gardens. Further information can be found, and tickets booked online. Web: belmont-house.org

“Somewhat incredibly, it was still wearing its original rubber from the mid-nineties!”

The interior is almost as new thanks to this car’s exceptionally low mileage of just 11k!