Dear child inside, I have a new toy for you. A fullsize, lavishly appointed Euro black-tie ghetto blaster which can, to individual taste, be hush-quiet or V8-raucous.

V8 what? Wait a second. Let me select Race mode via that lit thumbwheel on the wheel, dive into a sub-menu to summon Launch Control, deactivate DSC, lock the AMG Sound Experience in Performance mode, hold the car on the brake, floor the throttle, and brace for a violent lift-off. 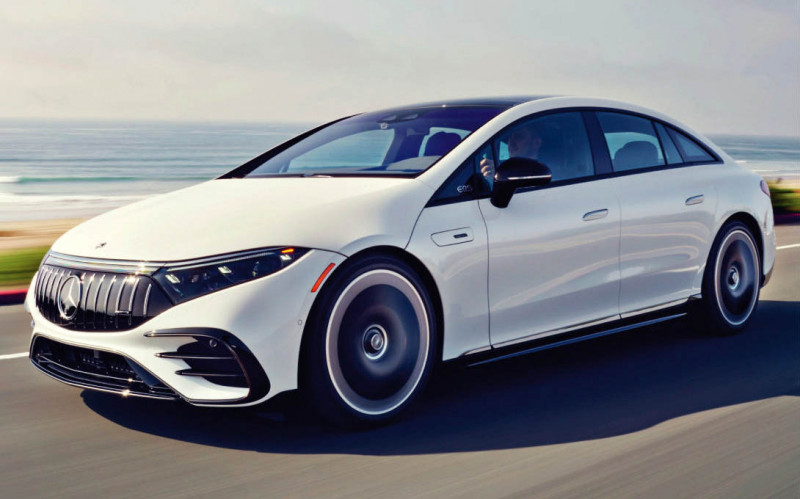 The EQS AMG 53 embodies many distinguished personalities. It can be Lord Luxury, Earl of Excellence or Baron Brash and Duke of Distinction, depending on the user’s whim. The interior is a mix of digital technicolour wonderland and exquisitely crafted classic opulence. Options include 22- inch wheels, a gaudy or stealth paint job, and the devil’s own signature Night Pack. Is the go-faster EQS a pretty thing? Even though beauty is in the eye of the beholder, the Panamericana grille shouts AMG from a distance, and the finely honed drag coefficient of 0.23 Cd pays tribute to the modernistic one-bow design.

When we left Palm Springs just after 8:00 am, the sky was 50 shades of grey and the rain was pelting down at psychedelic angles. The streets suddenly carried more water than the LA River in mid-summer, several sets of traffic lights had lost the battle against the elements, and not even the most dedicated trooper would have stepped out of his vehicle to write a speeding ticket. Which was just as well because light traffic, the awesome 100km mountain road that lay ahead and the always game child inside were all pointing towards a very special day. 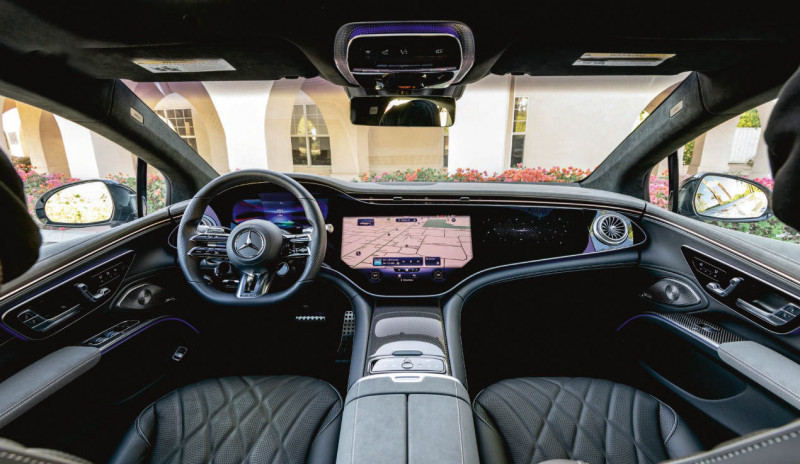 The charge display read 96 percent full as we passed the bottom station of the Aerial Tramway, the range calculator promised 528km, the final destination was exactly 280km away. What could possibly go wrong?

The EQS AMG can be a four-door sports car. Or a bank statement on wheels. But despite its vast 5223mm length, one of the few things this car does struggle to be is a spacious five-seater. True, the cavernous boot holds 610 litres or fold the rear seats, and you have a whopping 1770 litres. Trouble is, the second row is cramped. Occupants are troubled by marginal legroom and even less headroom further impaired by two neatly padded yet annoyingly intruding tailgate hinges. The plunging roofline makes swift entry and exit a challenge for the target audience. Up front, both passengers travel first class, but that won’t be much consolation for the parents-in-law in the back en route to the engagement party. What the cream-of-the-crop AMG sedan needs most of all are the extra 290mm the long-wheelbase S-Class fields over the non-executive version.

While the Cherry and Morongo Valley are lined with wind turbines which spin 24/7 to meet the fast-growing need for energy, the brown westbound hills are dotted with run-down idylls of a once-perfect world. Welcome to pick-up heartland and neighbourhood watch territory where NRA-backed righteousness and faded hippiedom live uncomfortably side by side. In this eerily dystopian neck of the woods, nobody cares about the alien trespassers in their nearly noiseless red Benz whose piercing matrix headlights clear the foggy path with the authority of a cop car on call. Hooligans might be tempted to switch on the Track Pace feature and attempt beating their own record stage times going back and forth between dwellings, but responsible citizens like us merely select Race and advise the passenger to hold tight in that ventilated, multi-functional massage seat.

Although the magic carpet waftability meets only the Silver Eiderdown standard, the EQS AMG 53 truly excels in the handling and roadholding department. Having said that, even on 21-inch rubber the compliance is cushy enough to glide over the really rough stuff as if that chassis had been designed by Hovercraft, not Mercedes. Transverse expansion joints are a different matter altogether, but potholes, crumbling shoulders and sudden surface changes are absorbed with aplomb.

Due to the vast tyre size, the Benz hates aquaplaning grooves. That’s the bad news. The good news is oodles of grip, even in the wet, through contracting radii and over off-kilter surfaces. It’s all a matter of confidence, trust and commitment. The e-powered starship really does deliver, not softly-softly like a Mercedes which aims to be everybody’s darling but like a champion-grade full-blooded AMG. Crammed with advanced smartphone-like intelligence, the EQS is in nine out of 10 cases more clever than its user. Its hyperscreen can stage a movie theatre, a music hall or a command centre. Its brainpower taps 5G and 3D, the sat-nav is masterminded by predictive Electric Intelligence, the MBUX infotainment system now fulfils its potential, the Zero Layer touch zone is as intuitive as these devices can be without prior expert tuition. The most compelling feature of all is the latestgen voice control which renders most tiles, buttons, zoom and swipe areas redundant because “Hey, Mercedes!” is all it takes to switch on the seat heaters, find a cheap charge point, or order a take-away.

Dynamic Select invites the driver to choose from five different modes. Ice is self-explanatory, Comfort should be labelled Boring, Sport is exactly that, Sport Plus feels less sharp than Race which is part of the optional-overseas Dynamic Plus pack. Individual offers to unite the best of the best: steering and suspension in Sport, drivetrain and AMG Dynamics in Sport Plus. In addition to AWD, four-wheel steering is standard. Below 65km/h, countersteer makes the big barge more manoeuvrable. Above this speed, stability by synchrosteer takes priority. It’s a complex system, but the driving experience is totally natural, at any speed and any steering angle. Having said that, there is an early ambiguity around the straight-ahead position which goes away after a couple dozen kilometres. Luckily, the same applies to the initial grabbiness of the available carbon-ceramic brakes which act upon the front wheels only. The one irritation which stubbornly prevailed was the extra pedal effort it took to bring the car to an embarrassingly late full stop.

The chassis of the base EQS is stuffed with plenty of fancy tech, but this AMG spin-off adds even more five-star sophistication like new axle carriers, mounts, wishbones and anti-roll bars, not to mention the recalibrated Ride Control Plus air suspension with dual-valve dampers which separately control the compression and rebound volumes.

Sounds trick, works to order. Despite the stiffer body structure, the crisper steering and brakes, and the expertly suppressed roll, yaw and pitch motions, the high-performance e-Benz is gifted with a long enough 3210mm wheelbase – and huge 2655kg kerb weight – to isolate its occupants from most of the vagaries they are about to travel over. It certainly also helps that the centre of gravity defined by the 108kWh battery pack sits low down between the axles.

Somewhere between Beaumont and Big Bear Lake, the old Route 18 spat us out onto San Bernadino Valley.

About three and a half hours into a still cloudy, rainswept day, the whisperliner from AMG had ticked almost all the right boxes. We executed the 3.4sec-to- 100km/h standard acceleration sprint not once, not twice but three times. It did feel 911 GTS-like fast, and yet the difference between the limited-time 560kW in Dynamic Plus and the regular 484kW and 950Nm available at any time is a mere four tenths to the sprint time.

Although one-pedal addicts can recuperate up to 300kW in stage-3 regen mode, coasting is so much more fun and only a paddle shift away. The official maximum driving range is 580km, which suggests that the journey should ideally include several downhill sections, emphatically inflated tyres, plenty of tailwind and the driver’s brain locked in Peace, not War.

When we docked in Manhattan Beach at noon, the indicated distance to empty was a sobering 53km, meaning our 96 percent charge was on track to give us just 333km. Feel free to do your own arithmetic, but that equates to a kWh per 100km number in the high ’30s, a far cry from the promised 21.5kWh/100km. Which either hints at the inability to comply with the highway code on part of the driver, or expresses the fact that we had a lot of fun that morning, weather notwithstanding.

Above: Boot holds 610 litres (1770 litres with seats folded) and hatch gives easy access to its full depth. But rear seat isn’t as spacious as you’d expect in a car more than 5m in length

Crammed with advanced smartphone-like intelligence, the EQS is in nine out of 10 cases more clever than its user