Electric cars are taking over, but what does that mean for the future of classic BMWs? This E31 8 Series presents one possibility – it has ditched its original petrol V8 for a Tesla electric powertrain. Words and Photography: Patrick McGrath.

Whether we like it or not, the future of motoring is electric and, as hardcore petrolheads, it’s tough for us not to want to instinctively fight against that. However, some BMW enthusiasts are choosing to embrace this source of power, the results are pretty cool and they might just be enough to convert a few people. For most of us, when we think ‘electric cars’ we picture people in white coats in a lab somewhere with white walls, white ceilings and white floors. What we certainly don’t think of is a rural village on the southeast coast of Ireland, where Damien Maguire has been quietly converting BMWs to electric in his spare time for well over a decade… 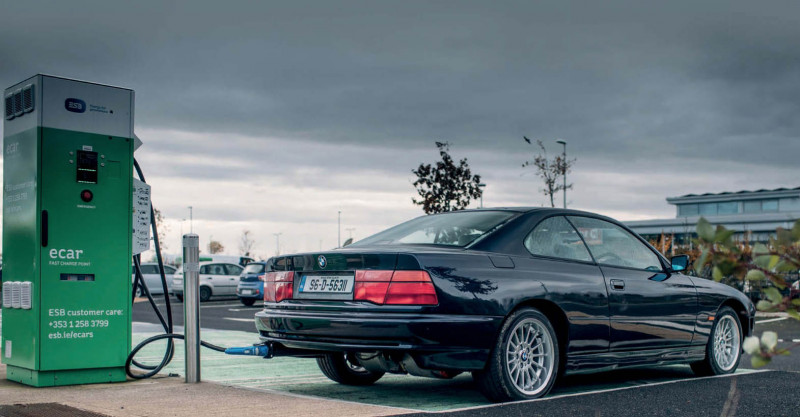 The Tesla-powered E31 8 Series you’re looking at now isn’t Damien’s first foray into the world of electric conversions. An electrical engineer by trade, he has converted six other BMWs to electric power in recent years. There’s no laboratory here, as all of these conversions were carried out between his driveway and garage at the side of his house, including Project Land Yacht, a 2001 E39 which he has covered over 100,000 electric miles and counting. From the first moment you meet Damien, you’ll be immediately aware that he isn’t doing these conversions for shock value (pardon the pun) but rather out of genuine enthusiasm and passion for building these cars. There’s not an unlimited budget behind the projects, with Damien telling us that his biggest challenge is often a lack of resources. But it’s these deficiencies in finances, something which we can mostly all relate to, that have forced Damien to get creative when needing to figure out solutions to problems which others might just throw money at until they go away. 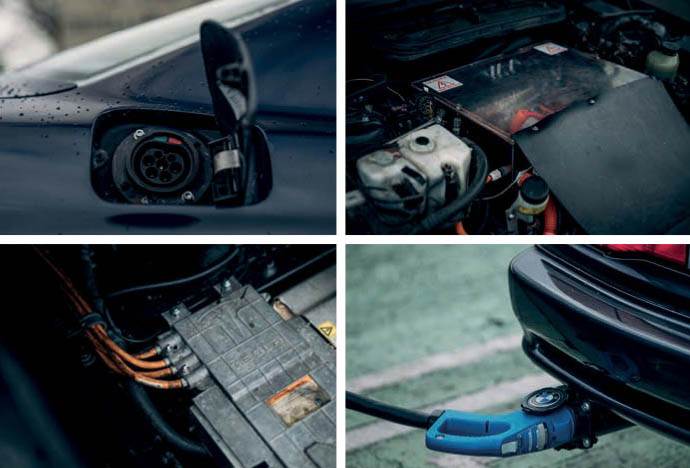 Affectionately known as ‘Der Panzer’, this E31 has been a long term goal of Damien’s. He distinctly remembers a Dinan E31 featuring on the cover of BMW Car magazine in the mid-1990s and being captivated by it, however, he would have to wait until 2014 before he would eventually find the E31 that would become his own. Following a train journey to Newry in Northern Ireland, he paid the lowly sum of £2000 for what he describes as a ‘pretty rough’ 1996 840Ci. It might have been a bottom of the market example, but it still made the journey back to his home in Wexford in one piece.

It was always Damien’s intention to convert the 8 Series to electric power and, not long after arriving home, he had removed the 4.4-litre M62B44 and in its place went a Siemens 1PV5135 electric motor connected to a ZF automatic gearbox with a custom shift controller and Renault Fluence battery packs. This was the first of five iterations of this car, which came to an end when an incorrect software parameter saw the motor rev to 9000rpm and eject the torque converter through the bell housing… The ZF automatic was replaced with a Getrag five-speed manual gearbox which fared much better from an efficiency perspective, but that too exited this world in style, with the layshaft coming through the gearbox casing following an attempted J-turn manoeuvre. Version three saw the introduction of a six-speed ZF manual which happily turned out to be J-turn-proof, and the car ran happily for about a year.

It was around this time that Damien acquired a Tesla Model S drive unit and things took a turn for the interesting. The Tesla drive unit is an all-in-one package featuring the motor, inverter and differential but it is very much a ‘closed shop’ when it comes to communicating with it with non-Tesla control systems. There were one or two aftermarket solutions available, but these came at a huge cost so Damien went ahead and designed his own custom logic board with an open-source motor control system. There are now over 200 of these logic board units in action around the world, but the first hand-soldered example still lives in his own E31. This was one of the biggest challenges he faced, getting a Tesla drive unit to communicate with a non-Tesla control system. While Damien was able to take care of the hardware, he relied on the community at OpenInverter.Org to assist with the software side.

With the Tesla drive unit now under control, the next challenge was a more traditional engine-swap one; making the whole Tesla unit fit in the E31. For this, Damien turned to a friend and fellow BMW enthusiast, Dave Gormley, to design and fabricate a custom rear subframe and suspension system around the Tesla unit. With limited space, the original E31 multi-link setup was replaced with an adapted E34 semi-trailing arm one instead.

The added weight at the rear of the vehicle required a custom coilover pairing, and at over £2500 provided a considerable roadblock for the project. However, luck would have it that Damien was able to find the exact specification coilovers that had been built by GAZ for another customer, but were never paid for or collected, at a considerable discount.

The next pieces of this new puzzle were the 16kWh batteries from a hybrid 2013 Vauxhall Ampera which would be fitted at the front of the vehicle. They currently only off er around 50-miles of range, but supply enough power to make the most of the Tesla drive unit, allowing Damien to enjoy some serious performance. If you only know one thing about electric cars it’s going to be about their vast levels of torque, and electric motors develop maximum torque at 0rpm, with the Tesla unit capable of generating an incredible 1106lb ft; due to this the decision was made to use off-the-shelf E34 540i driveshafts for ease of replacement should the time come.

With this new setup completed and running, Damien made plans for his first track day in the electrified 8 Series. Although he was weary in advance of the day, fearing animosity towards the project from other track-day goers, his concerns proved to be unfounded. He was welcomed by an enthusiastic group at Mondello Park, and the organisers even provided the required three-phase electrical supply for him to charge the car between sessions. Unfortunately, this is where that version came to an end; a simple overcorrection led to the E31 hitting a bank on the outside of the track. While the damage was mostly cosmetic, and the car was still relatively rough around the edges, it inspired two thoughts in Damien’s mind. The first was that he should build a dedicated electric track car and the second was that it was time to bring ‘Der Panzer’ up to spec, and that brings us to where we are today, with the fifth and most current version of the car.

There is something disconcerting about watching this immaculate E31 move away silently under its own power, but it’s something you quickly get used to and appreciate the novelty of. Its ability to vanish up the road in relative silence never gets old either. If you didn’t know otherwise, there aren’t many tell-tale signs that the car is electric when at a standstill. Even the shifter which controls the Tesla unit is from an E60 M5 and the interior is standard beyond that, aside from two small toggle switches. The largest giveaway is the recently added CHAdeMO fast-charging port which resides where the passenger-side exhaust tip once lived. This is in addition to the slower Tesla 10kW charging port which hides behind the factory fuel filler cap. If you get down on your knees and look under the rear, it is difficult to miss the Tesla unit, providing you know what it is in the first place.

While electric cars are often extremely heavy, with the Tesla Model S saloon weighing up to 2200kg depending on its configuration, electrifying the 8 Series has actually resulted in the car losing a substantial amount of weight. The E31 was never lightweight itself, with Damien’s weighing in at 1905kg pre-conversion, but with clever componentry choices, the car has shed 195kgs and now sits at 1710kg. It has experienced a power bump, too, and where the original 4.4-litre V8 made 286hp, the Tesla unit adds almost 100hp to this along with the benefits of that vast amount of torque and instant power delivery.

Since the first electric conversion with the Siemens motor, the car has covered around 26,000-miles under pure battery power, with around 6000 of these being with the Tesla drive unit. The car will come off the road again shortly for its next evolution, with the plan being to add a significant amount of range to the car with larger battery packs to drive from Ireland to Münich. Despite everything he has achieved with the car – being the only Tesla-powered E31 in the world, and the first car in the world to use a Tesla drive unit with a custom control system – Damien remains remarkably humble about the whole thing, while still exhibiting a huge level of passion for the project and the desire to continue to improve it. “It’s not a big budget build, I even felt nervous bringing it to the Fully Charged show at Silverstone but people were really interested in it,” he smiles. And while the idea of electrifying your BM might seem daunting, Damien doesn’t see it that way; “This is all stuff that you can do in your shed or at home as safely as wiring a plug or working on a high-pressure fuel system.

You still get your hands dirty. They’re still cars,” he says and, ultimately, regardless of what we’re into we’re all car enthusiasts at the end of the day. Damien, and others like him, have simply found another way to enjoy cars, and when that results in reducing weight and increasing performance, who can complain about that?

There are few overt clues that all is not as BMW intended, until you start looking a little bit closer… A mixture of Tesla and Vauxhall kit have been used in the creation of this all-electric 8 Series.

Nice conversion — but petrol power of V8 is just perfect

Electric Classics - I am reluctant in welcoming the electric car revolution and I’ve been pondering what it might mean for all the petrol-powered classic cars in the world. Your article on the E31 8 Series powered by a Tesla motor was a welcome surprise, it shows that converting classic BMWs to electricity can be undertaken sympathetically and gives me hope for the future – perhaps classics can be given a new lease of life with electric power? I especially liked the way the charging port was hidden in the original exhaust on that car – what a great touch!

Do you have an estimate on the total cost of the conversion? Cost of parts and amount of labor?