A drop-top M4 is the ultimate grand tourer, so is the new all-wheel drive M4 Competition Convertible all things to all people? Words: James Fossdyke. Photographs: BMW.

You could be forgiven for believing BMW’s latest M3 and M4 models are basically peas in a pod, as long as you ignore the number of doors or the shape of the roof. After all, they all have the same engine, roughly similar performance figures and lots of matching equipment, so surely they must all drive similarly? Not a bit of it. Every model in the M3/ M4 line-up has a distinct role to play, and the differences run far deeper than the bodywork. While the engine and the basic architecture may not change, tweaked suspension set-ups and differing body stiff ness gives each and every model a unique character to separate it from its siblings. Of course, that means everyone will have their own favourite, depending on how you like your sports car to look, feel and drive. For me, though, it has to be the two-door rag-top version – or the M4 Competition Convertible with M xDrive, to be exact. 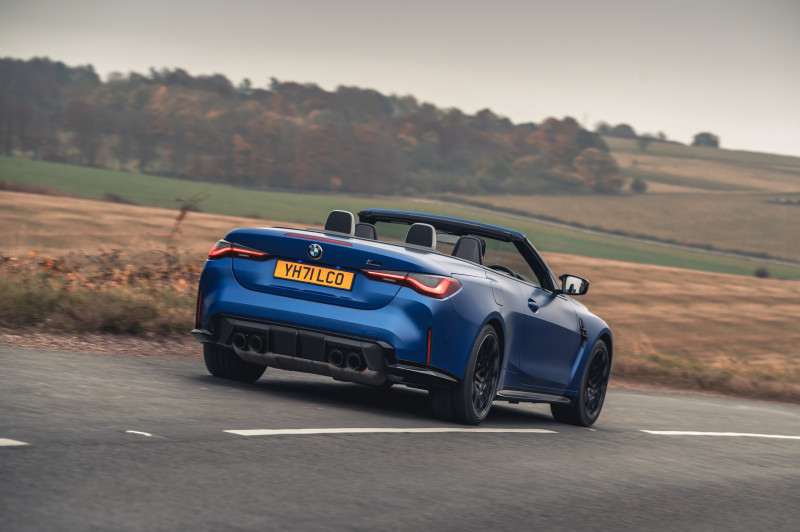 Eagle-eyed readers will note the inclusion of the word ‘xDrive’ in that name, and that’s because, unlike the hard-top coupé and saloon models, this convertible version of the M4 Competition is solely available in all-wheel- drive flavour. The decision to include M xDrive options for the latest-generation M3 and M4 models may be a controversial one, but it’s also entirely sensible.

For one, the system remains rear-biased, so unless you’re driving in horrible conditions or like an absolute lunatic, you’d never even notice the difference. The M xDrive system is similar to that of other BMW products, in that it uses an electronically controlled multi-plate clutch in the transfer case to distribute torque between the front and rear axles. In the case of the M3 and M4 models, however, it is paired with an Active M Differential at the rear.

The system can be tweaked using the driving modes, with a choice of 4WD, 4WD Sport and 2WD. The standard 4WD mode is used for everyday driving, but the 4WD Sport directs more torque to the rear wheels, allowing the back end to slide more freely and providing all the advantages of rear-wheel drive with the stability of all-wheel drive. And for track driving, when the traction control is switched off, there’s a 2WD mode that sees all the power head to the 285/30 ZR20 rear tyres. Why you’d need it when the 4WD Sport mode is so good, we can only wonder, but it might keep the purists content.

The other advantage of all-wheel drive is the performance advantage it provides. Where the rear-wheel drive M4 Coupé takes 3.9-seconds to get from 0-62mph, the M xDrive version cuts that to 3.5-seconds – an improvement of around 10 percent. Admittedly, the M4 Competition Convertible weighs around 150kg more than the equivalent Coupé, and that adds two tenths to that time, but it’s still mighty fast. A 3.7-second 0-62mph time is getting mighty close to supercar performance. But the all-wheel drive system does more than just massage the figures; it also makes the M4’s performance more accessible. Where a rear-wheel drive version might spin its fat rear tyres – on a damp road, for example – the M xDrive system silently goes about its business to make sure there’s barely a moment’s hesitation. Put your foot down and the car just goes. There’s no drama, no loss of traction and no moment of panic.

But that’s not what makes the M4 Competition Convertible my favourite of the M3 and M4 models currently on sale. Nor is it the suspension, although that too is very well judged. That’s partly because it feels completely different to the hard-top M4 Coupé, which makes no bones about its sporting intent. Even in its most comfortable, laid-back driving modes, it feels frisky and intense, with firm suspension that’s clearly tuned for something smoother than a British town centre street. Admittedly, most things – up to and including a bed of nails – are probably smoother than your local high street, but where the M3 feels relatively supple, the M4 Coupé is stiff and unforgiving. It’s great on a racetrack, but less useful in a supermarket car park.

The M4 Convertible, however, is a little less rigid. The body isn’t quite as stiff, the car is a little heavier and the suspension has been retuned, making the ride that little bit more comfortable and pushing it back into the bounds of acceptability. It isn’t a magic carpet, and it isn’t even as comfortable as the M3, but it’s much smoother than the M4 Coupé.

Of course, in Comfort mode, the drop-top M4 lacks some of the Coupé’s body control and instantaneous response to control inputs, but that all comes back when you engage Sport or Sport Plus mode. They make the ride increasingly firm but return the ultra-sharp handling that makes the M4 such a joy to drive. That trademark balance remains, and though the feel through the brake pedal and steering wheel isn’t quite as natural as hoped, the steering is precise and well weighted.

That said, there's a temptation to tweak the setup by opting for the Sport braking and steering modes. The slightly heavier Sport steering feels a little more reassuring and substantial, while the Sport braking mode gives you a more immediate response, albeit with no improvement in brake feel. As with the M3, the driving modes have a noticeable impact on the experience, so the customisation options come in handy. With the two little M buttons on the steering wheel, you can set the car up the way you want it. Personally, I’d go for a comfortable setting with less savagery and the softest suspension, but Sport steering and brakes, then a sportier setting for good back roads, ramping the engine and suspension up a notch to improve the handling and performance. For all this guff about the oily components, though, my favourite thing about the M4 Competition Convertible is the folding canvas roof. I’m not especially keen on the styling with that hood in place – like most convertibles, it looks as though someone has pitched a tent on an otherwise smart-looking car – but when it’s tucked away behind the seats it looks absolutely stunning.

Yes, I’m aware of those big front grilles and there’s no doubt they’re divisive, but we’re becoming accustomed to them now, and maybe they aren’t so bad after all. Admittedly, the M3 and M4’s more aggressive styling makes them even more prominent, but it doesn’t ruin the overall look of the car – at least not in my book. The 4 Series’ basic silhouette has always been easy on the eye, and removing the roof gives it a speed-boatesque vibe that really suits a grand tourer like this. The details are great, too. There’s all the usual M performance stuff, such as the black trim, aerodynamic door mirrors and bigger vents, but it all works harmoniously. Better still, the M4 Convertible’s roof arrangement means there’s no need for the thin rear spoiler found on the M3 and M4 Coupé models. Instead, the M4 Competition Coupé has an altogether neater ducktail, which makes it feel that little bit more restrained. A small difference, perhaps, but one that gives the convertible M4 that little hint of extra class. The other major advantage of losing the roof is the amount of headroom in the back.

Although the M3 saloon is acceptably spacious in the rear, the M4 Coupé is not. The rakish roofline doesn’t reduce the legroom drastically, but its effect on the headroom is crippling. It really isn’t a place for adults to spend longer than a few minutes, although children will probably get away with it.

In the soft-top, however, the situation is a little different. Of course, with the roof in place it’s little better than the coupé, but when that roof is down there’s suddenly infinite headroom. The sky really is the limit. That might not make the M4 Competition Convertible a more practical family car than the coupe, but it does give you more chance to make use of that decent rear legroom and take a few friends out for a meal on a sunny summer’s day, for example. A small advantage, perhaps, but not an insignificant one.

The roof does, however, limit boot space slightly. Where the M4 Competition Coupé has 440-litres of boot space whether you opt for all-wheel drive or not, the Convertible has just 385-litres of capacity. A 55-litre reduction isn’t the end of the world, and the M4 Convertible still has more boot space than a standard Volkswagen Golf, but it might be a consideration for those who like to put a lot of junk in their trunk, so to speak.

But the real reason I like the folding roof is the way it makes the M4 feel. I don’t care which car you’re driving; removing the roof will make it feel much more interesting. Talking about the wind in the hair is such a tired old cliché, but chopping away the roof makes you feel less isolated from the car and the act of driving. It’s as though the whole experience becomes more organic and natural, and at a time when car makers often work hard to make driving feel as refi ned as possible, that’s a big draw.

It’s that, and the M4 Competition Convertible’s enormous versatility, that makes this car so appealing. It’s less one-dimensional than the M4 Coupé, which is an out-and-out sports car, and turns the M4 into a good-looking grand tourer, ideal for long road trips. The addition of all-wheel drive just makes it even more usable in any weather, allowing you to exploit the performance even when the rain comes down. But while the M4 does all this grown-up stuff brilliantly, it can still play the sporty hooligan role when the mood takes you. Which makes the M4 Competition Convertible is the most versatile and most desirable member of the M3/M4 family.