Lamborghini stunned the world in ’71 with the Countach, a reveal that set a supercar template. Or did it?

1938 was a vintage year for Italian car designers. It gave us Leonardo Fioravanti, Giorgetto Giugiaro and Marcello Gandini. These three men, each in their own particular way, were responsible for the legendary Lamborghini Countach, which celebrates its 50th anniversary this year. Of course, it’s Gandini. It always was. The Geneva Motor show of 1971 was Gandini’s finest hour. Not only did Lamborghini show the astonishing Miura P400 SV, it also unveiled the car that set a trajectory for the modern supercar that endures to this day. Giugiaro didn’t care for Gandini. When the latter applied for a position with Carrozzeria Bertone in 1963, it was Giugiaro who blocked his way. Gandini was patient, and when Giugiaro left for Ghia two years later, the 27 year-old designer had better luck. 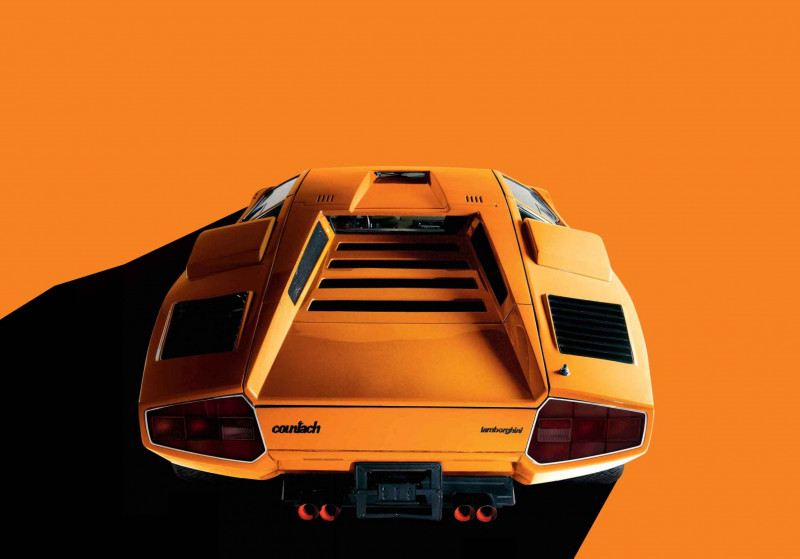 Now, consider the timeline. Gandini was hired as a junior stylist and one of his very first jobs was to work on clothing the rolling Miura chassis that Lamborghini had originally presented at the 1965 Turin Show. Sant’Agata couldn’t claim credit for inventing the mid-engined sports car, as Rene Bonnet had already brought the delightful Matra Djet to market, but the Miura moved things into a new realm and Gandini was responsible for creating the clamshell front and rear ends to wrap around the compact passenger cell. The louvred rear window and the flip-up headlamps were obvious Gandini garnishes. He even sketched the Miura badge, replete with bull’s horns and tail.

To this day, Gandini and Giugiaro disagree on much about the Miura. The latter feels that the Miura was his work and that Gandini merely completed what he had started. Naturally, Gandini has a different opinion.

“In the autumn of 1965, Ferruccio Lamborghini, Paolo Stanzani and Gianpaolo Dallara came to me and proposed that I work with them on a project,” he says. “I didn’t start straight away because I still had a few projects to finish, so in the end I produced the first sketches in late November. I remember that by 10.00pm on Christmas Eve, 24 December 1965, we had practically finished the model in wood and ecowood. We managed to beat Father Christmas to it by a couple of hours. Then the car was made in January and February and presented in March.”

Depending on who you believe, Gandini had seemingly come from nowhere, with no formal design qualifications to create the shape of the very first supercar within the space of twelve months or, well, he didn’t. That’s by the by. What we do know is that there’s no Giugiaro influence at all in what came next, the astonishing Countach. The extremity of its design was fuelled by Gandini’s desire to obliterate the influence of Giugiaro.

“The fact is that the Countach represented a clean break from some of the car industry’s consolidated practices. It didn’t refer to any other previous cars. It was not in people’s eyes; tastes had not been educated to appreciate it. Initially it was a culturally alien form, but within a few years it became an object-symbol,” says Gandini. 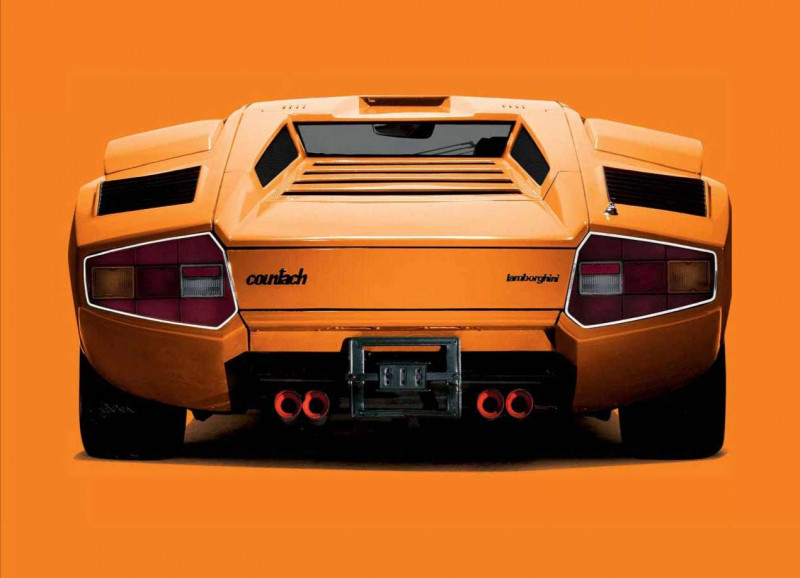 Time tends to move slowly at Sant’Agata. It’s rarely been a place where there seems in much of a rush to get things done. In a market where buyers want the newest and shiniest things, Lamborghini’s supersports cars are the Huracan, which has been on sale for seven years, and the Aventador, which has been around for 10. It’s quite remarkable, therefore that the Countach appeared a mere 60 months after the Miura was unveiled, and instantly consigned its predecessor to the back catalogue.

The yellow 5.0-litre LP500S that appeared on the show stand in Geneva was a chimera. Beneath its alien skin, it featured a shortened half-spaceframe chassis and engine that wasn’t to see production, the prototype eventually meeting its end being driven into a concrete block at the MIRA facility north of Nuneaton, in what has to be the world’s most pointless and tragic crash test.

Even then, production was not guaranteed. At around the same time that flashbulbs were popping at Geneva, Lamborghini’s tractor operations were struggling. Without that cashflow and with the oil crisis looming, Ferruccio Lamborghini was unconvinced by the numbers around the Countach. After a protracted bout of arm-twisting by engineers Stanzani and Bizzarrini, he was talked into a wager. If test driver Bob Wallace could drive the prototype from Sant’Agata down to the Targa Florio in Sicily and back without it breaking down, Lamborghini would green light production. In May 1972, Wallace sounded the horn outside Ferruccio’s office and shook hands with the old man, who smiled, shrugged and returned to work. 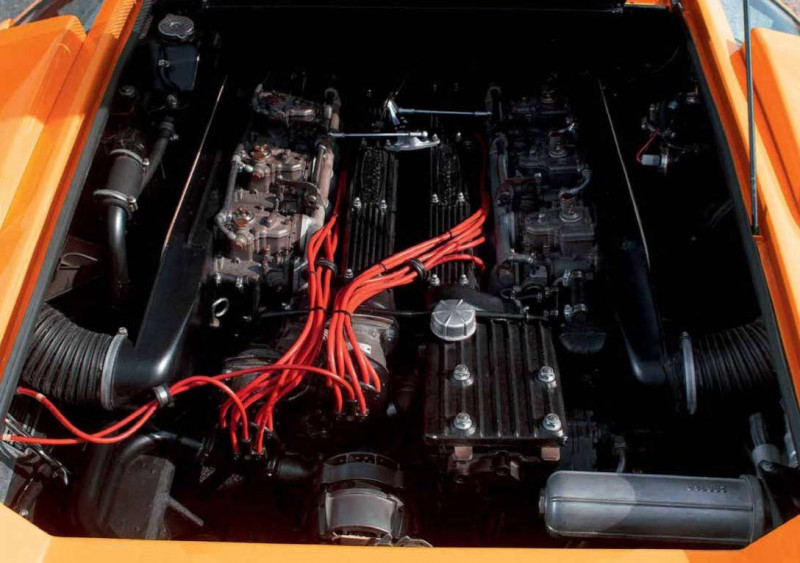 Between the 1971 Geneva Show and the first LP400 customer deliveries in 1974, the Countach changed a great deal. Out went the 328kW 5.0-litre V12 and in came a 276kW 3929cc unit developed from the Bizzarrini powerplant in the Espada. Likewise the chassis changed, adopting a full tubular spaceframe which weighed 90kg less than the show cars’ steel plate lash-up. Steel body panels made way for aluminium bodywork, the electronic dash was ditched and breathing was improved using air scoops and NACA ducts. After smashing 20 of the twopiece side windows trying to fit them, Lamborghini relented and fitted a simpler three-pane arrangement. The Countach entered production in LP400 guise, but it wasn’t long before Austrian-Canadian multimillionaire and F1 team owner Walter Wolf wanted something more special. And what Mr Wolf wanted, he tended to get, unless you choose to bring F1 constructors’ championships into the mix. Wolf’s vision for the Countach changed its direction for good. Out went the sensuality of the original shape and in came a car that would launch millions of bedroom wall posters. Tacked-on wheelarch extensions, teledial alloys, huge Pirelli P7 tyres, the iconic but aerodynamically hopeless arrow-section rear wing and, most importantly, a 5.0-litre engine. Wolf ordered two of these cars, one red and the second finished in Bugatti Blue, and these were to become the basis for the LP400S, which arrived in 1978.

Enter Leonardo Fioravanti. Every story needs an antihero and, as far as Sant’Agata is concerned, here’s your man, because Fioravanti is cast as the wrecker, the man to demolish a fifty-year-old myth. You probably know the story already. Ferrari was selling Fioravanti’s front-engined 365 GTB/4 Daytona, which instantly appeared a relic when the Countach launched. And after that, Ferrari followed Lamborghini with another Fioravanti design, the 365 GT/4 BB, playing mid-engined catch up. 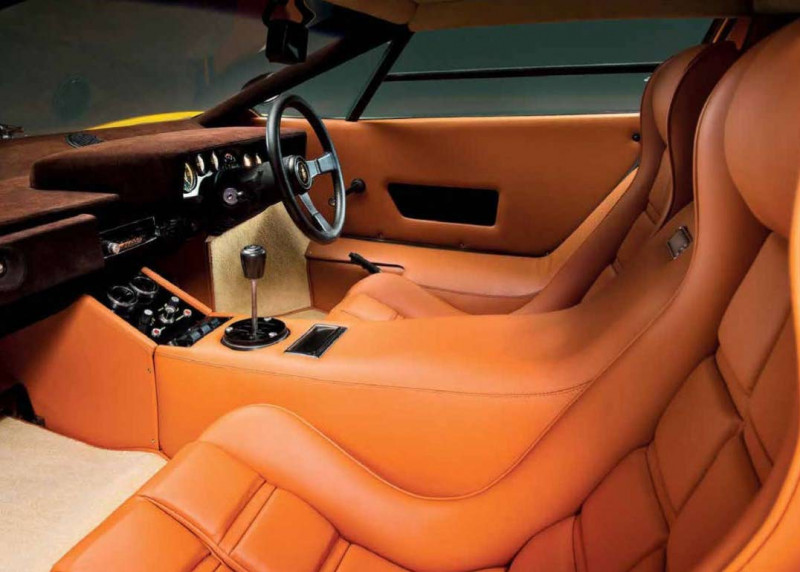 Except that’s all baloney. It never happened. The first Ferrari BB was shown at the same 1971 Turin Show as the Countach prototype and beat it to market, customers taking delivery a year before any paying punters got the keys to a Countach. At this stage, Ferrari had more experience in building mid-engined cars than Lamborghini, with more than 3000 Dino-badged 206 GT and 246 GT/GTS models rolling from Scaglietti’s gates. The BB never had to play catch up either. Between launch and the end of its life in 1982, it outsold the Countach by better than five to one.

Fioravanti then reprised that success with the BB’s replacement, the Ferrari Testarossa. Lamborghini designed the 5.2-litre Countach QV in response to Testarossa development, and not vice versa. In three years from 1985, Lamborghini sold 610 units of the angriest production Countach. By contrast, Ferrari sold more than 1000 Testarossas every year across its seven year production run.

So perhaps Lamborghini’s spinning of the Countach yarn is a filigree of tall tales and exaggerations. This is a car that sold, on average, 122 units per year across its sixteen-year lifespan. Marcello Gandini doesn’t care for sales figures, nor does he particularly care about the one thing that defined the Countach, its aesthetic.

“Just styling is not fun,” he says, preferring to concentrate on assembly, mechanisms and architecture. Gandini’s next commission after the Countach was for Ferrari, with the Bertone-credited 308 GT4, a hat tip by Ferrari to the quality of his work for the tractor boys across the Emilian plain.

So perhaps the Countach is a car that has always benefited from a certain fudging of fact. Its adherents don’t care and nor do we. The reason nobody remembers that the 365 GT/4 BB was present in the show hall in Turin back in ’71 speaks volumes. There was only one word on showgoers’ lips. Countach!

Half a century on, its impact has barely palled. By today’s standards this automotive colossus is minuscule, taking up less space on the road than a modern Ford Focus. Gandini doesn’t think of it as his finest work, preferring instead the similarly petite Lancia Stratos HF. No matter. Somewhere between the romance and reality is the story of how the work and influence of three men resulted in the definitive supercar. You won’t find a photograph of the car on the walls of Gandini’s studio.

“My archive is generally the waste paper basket, which I keep under here. I prefer the archive of memory: it easily erases the disagreeable items.”

THIS AUTOMOTIVE COLOSSUS IS MINUSCULE, TAKING UP LESS ROAD SPACE THAN A MODERN FORD FOCUS

THE GENEVA MOTOR SHOW OF 1971 WAS GANDINI’S FINEST HOUR

Article type:
Review
lamborghini1971lamborghini countach
—
201
Write a comment
No comments yet. Be the first to add a comment!