In the Seventies, South Africa was one of Alfa Romeo’s most important markets outside of Italy. The Berlina 2000 was both successful in sales and on the racetrack

RACE ON SUNDAY, SELL ON MONDAY

It looks dainty. The pillars are thin and the box-type design is typical of ’70s European cars. The rear wheelarches, which partly cover the rear wheels, are a strong Berlina design element as are those double headlamps. At the rear, there is a single exhaust pipe and when you climb in, that ’70s onslaught continues. The thin pillars – together with large, upright windows – have a huge greenhouse effect and present a near-perfect view of all the car’s extremities. 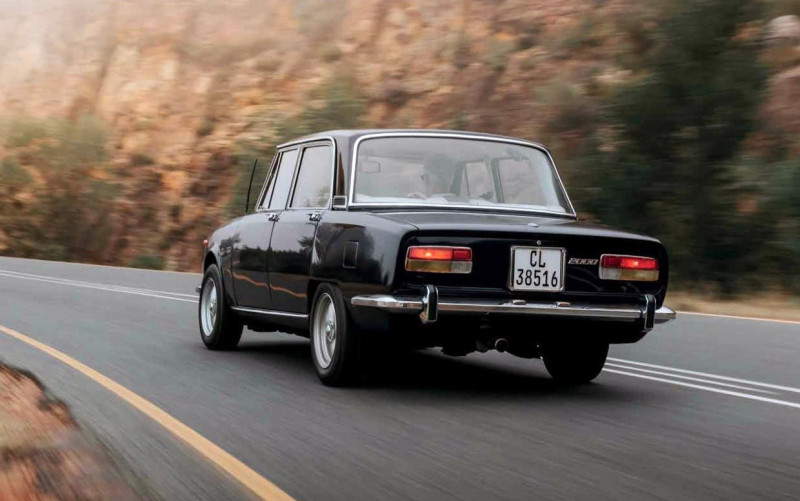 Unlike modern vehicles, the doors and windows are very close so it feels compact even though the bonnet stretches out in front of you. The cabin has a pleasant “aged” smell. For a car of almost a half-century, the interior is in remarkably good condition. The vinyl dashboard presents perfectly along with the controls, gear lever and steering wheel. The seats have a tear or two, but that is to be expected. The rest of the vinyl throughout the cabin, including the door cards, is in good nick. Above the gear lever is the old radio and the three analogue Veglia Borletti dials indicating the cooling fluid temperature, fuel gauge and clock. The chrome and wood are gentle reminders of a bygone era. 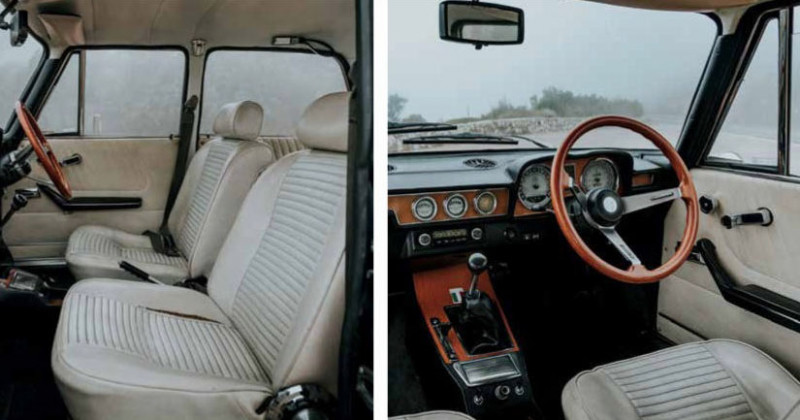 Theo Lotter was quite excited to share the vehicle’s history. “This was my very first car. I bought it in 1981 and sold it in 1984. I remember assisting the new owner, James Lamprecht, in preparing the car for a concourse event shortly after I sold it. After that, life happened and, for the past 25 years or so, I never saw the car again. In December 2021, James phoned me out of the blue and offered me the car. It wasn’t a call I expected but it was a pleasant surprise. After all, you only ever have one ‘first car’ in your life.”

When I turned the key, I could only imagine Theo’s level of nostalgia when he heard that throaty exhaust again after nearly 40 years. I looked down and discovered the floor-mounted brake and clutch pedals and the top-mounted throttle pedal. I pulled off and within a few gear changes, the direct shift action of the gearbox already impressed. There is no play in the gearbox and each shift is precise and easy to execute. The unassisted steering wheel offers good feedback although it requires some good old-fashioned elbow grease to park.

Everything is within easy reach. I prefer to sit relatively close to the steering wheel, so my knees pointed upwards on each side of the steering column. The gearlever is close to the steering wheel and enables smooth shifting. As we headed up Franschhoek mountain pass, there was a willingness to rev from the 2.0-litre engine. It is not a high-revving engine, but even as low as 3 000 to 4 000 r/min, it performs with a real level of zest. There is a good combination of torque and power and as the needle passed 4 500 r/min, I changed gear. The redline is marked just after 5 500 r/min. The car constantly felt nimble and I wanted to drive it faster and brake later for corners. All the controls, at idle or on the move, are solid.

As we pulled into a parking spot, I completely understood the allure of classic Alfas. This was one that best represented Alfa and did battle against so many other run-of-the- mill cars on South African and European tracks. The opportunity to be able to buy back your very first car, after 38 years is incredible …that alone is enough to get emotional about.

How to maintain a classic car for 38 years The previous owner, James Lamprecht, meticulously cared for this car. He followed a few basic rules, which had preserved this model for four decades. For starters, he averaged around 500 km a year, never washed the car with a hose pipe or used too much water, and he serviced the car himself. All perishables were maintained or replaced as needed, and the fluids changed annually. If there was any mechanical issue, it was immediately repaired.

He had made a promise to Theo that should he decide to sell the vehicle, he would call him first. On the day of the deal, James carefully went through the car with Theo, revealing each imperfection or possible problem and advising him how to fix it. The result is the car will be in even better condition by the end of this year.

01 Heading up Franschhoek mountain pass, drawing attention even when it was parked.

03 A badge that excites petrolheads.

06 Cream-coloured interior will now receive some attention as it is nearly 50-years old.

08 Note the large glass area, double headlamps and that pretty side mirror.