Originally featured two decades ago, ‘WOO’ has been given a new lease of life thanks to Ben Thompson. Words and Photos Jon Cass.

We all remember the late Peter Kennedy’s giant-killing Capri 4x4 Cosworth that made a welcome comeback recently. Its registration plate happened to contain the three distinctive letters WOO which helped to make it instantly recognisable. While Peter’s Capri was busy decimating everyone it met on the quarter mile two decades ago, there was another blue oval badged car making a name for itself on the show scene also bearing the same three letters, WOO. When Ben Thompson came across this 24-valve Cortina, a well-known feature car from back in the day, it was in a sad state, but that burning desire to resurrect a legend just couldn’t be ignored. 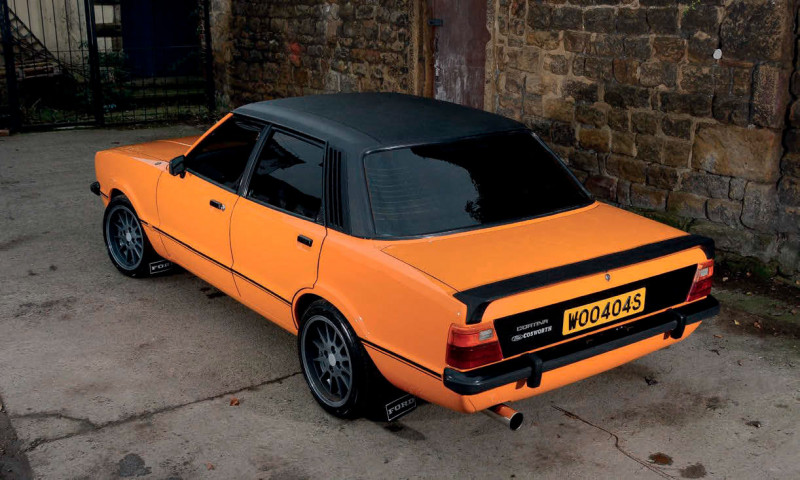 We’ve featured a few of Ben’s cars in the past, many of which originated from the southern hemisphere. “I prefer to buy cars from South Africa as rust-free examples are still obtainable, as long as you do your checks,” Ben explains, “unfortunately when Covid happened, the opportunity to import any cars soon disappeared!” Although Ben buys and sells many of the cars he brings in from South Africa, he happens to have a genuine passion for old Fords and more than he’d prefer end up being keepers. “I was looking out for a project to keep me busy during Covid and with no cars available from South Africa, I started searching in the UK instead,” he admits. “A Mk4 Cortina fitted with a 24-valve V6 in London caught my eye.” 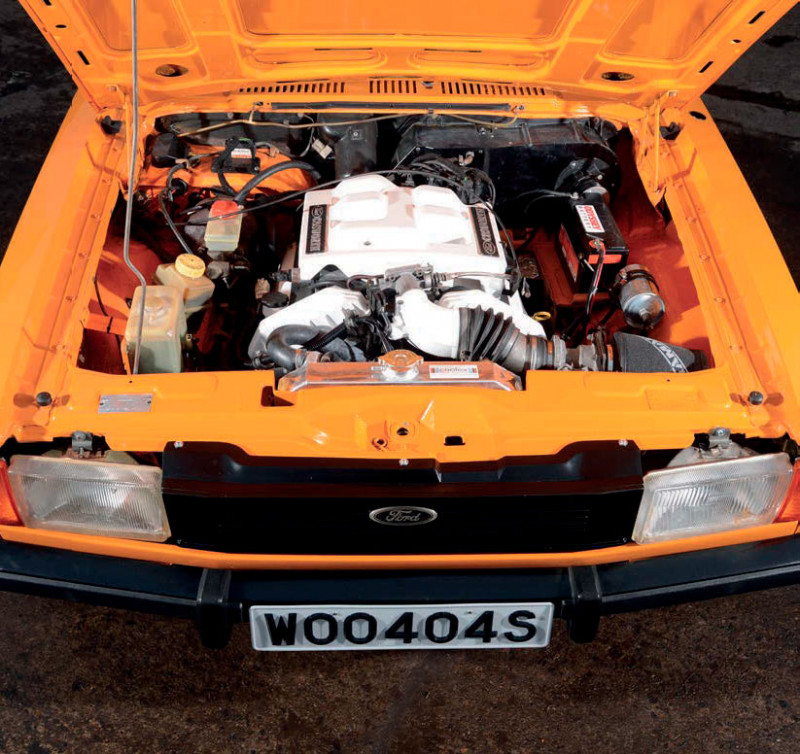 As Ben was based 200 miles away and regularly buys cars without viewing them in person, a chat with the vendor along with some photographs was enough to convince him to take the plunge. “I knew it was a risk, but I was confident any defects I’d be able to sort,” Ben recalls.

“The fi rst warning sign occurred when the recovery company phoned to ask if I still required their services as they noticed the car was so rotten.” Ben’s optimistic side took over and the Cortina was transported 200 miles to his workshop only to discover the recovery company weren’t exaggerating. “It was nothing like I’d initially been told,” Ben laughs, “the rot was well disguised and after a quick inspection, it was confi rmed terminal.” The tin worm had destroyed the entire floor and bulkhead though the outer panels were surprisingly good, “I wasn’t sure what to do at first, there were many salvageable parts, but the shell itself was well beyond saving,” Ben explains, “my first thought was to break the car, most probably at a signifi cant loss.”

This would have been the most sensible option, but Ben had by now discovered this Mk4’s interesting history interspersed with a period of trophy winning fame. “I’d tracked down the previous magazine feature from June 2002 when the car was owned by Steve Whittaker,” Ben continues. “It had been rebuilt by Lee Selway with the help of Steve Taylor to show standard, though it was a more recent keeper, Gavin Black who kindly sent the information.” Armed with the knowledge that his next decision could easily see the demise of a piece of modified Ford history, Ben took the major decision to resurrect WOO and add his own mark on the car in the process.

“As the shell was beyond saving, my main priority was to retain the spirit of the original, but in a replacement shell,” Ben tells us, “effectively an up-to-date equivalent of the original project.” By now, Covid rules had been relaxed, enough for Ben to track down a solid donor shell from his favoured source, South Africa. “I looked for a GL or a Ghia with no success and bought a yellow Mk4 3.0S,” Ben tells us, “this would have been ideal, but once it arrived in the UK, I knew it was far too good to butcher by swapping parts.” A further search proved more fruitful, this 1977 Mk4 1.6L in Wild Tangerine (Signal Amber in the UK market) with a tan interior catching his eye. “By now, I’d already spent far more than I’d planned, but luckily I managed to recoup some cash selling the doors, bonnet and bootlid from the UK car, the few parts that had no rust!” Ben smiles.

Fortunately, Ben’s Cortina-sourcing luck had improved with the South African 1.6L as the only small areas of rust on the lower rear quarters were easily repairable. “I stripped out the tan interior and fitted a new headlining,” Ben says, “I then fitted a vinyl roof by Will Trim, an aspect of the original car I deemed essential.” With the 1600 Pinto engine removed, Ben then set about installing the all-important 24-valve Cosworth running gear from the original UK car along with a few clever upgrades including an improved cooling system. “The cam cover has been powdercoated white and a smaller battery from Odyssey Motorsport is now located at the rear instead of the front,” Ben points out, “as by the time I’d re-routed the water system, there was little space left within the bay and I was reluctant to install the battery in the boot.” Matched to a Type-9 five-speed ’box with quickshift and V6 bellhousing, the 220 bhp Cosworth is certainly no slouch and the tuneful howl thanks to that bespoke Keltec exhaust soon becomes addictive.

That significant increase in available power has led to a few sensible chassis upgrades too. “I wanted the car to handle and stop well, but I was keen for the stance to be bang on,” Ben tells us, “so getting the balance just right took a lot of time and effort.” This has been achieved by using GAZ Gold dampers on the rear with bespoke solid nylon void bushes on top of the axle, close to the diff along with heavy-duty lowering springs. Meanwhile at the front, standard front springs remain, but with the addition of GAZ Gold dampers once again. “The original version of WOO had larger 16 inch seven-spoke wheels, I wanted to retain the same size but with a different design,” Ben tells us. “I settled on 8x16 inch MIM 1900 alloys in gunmetal grey which are normally found on BMWs and VWs.” These larger rims also come in handy for allowing bigger brakes, Ben opting for Hi-Spec four-pot callipers with 283 mm discs up front and 273 mm Escort Cosworth discs and callipers at the rear along with the same model’s handbrake cable.

Previously, the original 24-valve Cortina benefitted from cloth Cosworth seats, but Ben was keen to go for a design that would blend with the tangerine paintwork this time around. “Capri 2.8i front seats with Carla check cloth seemed like the ideal option but finding a Mk5 rear bench with an armrest was a nightmare,” Ben laughs. “An armrest was something I had my heart set on throughout and I eventually managed to swap the complete 1.6L tan interior for this rear bench.” Now recovered in matching Carla check and with that bespoke steering boss, Sierra Cosworth steering wheel and the clocks from the original WOO, Ben is quite rightly proud of how it’s all come together.

Good to be back

Incredibly, its now two decades since the original incarnation of this Mk4 graced the pages of this magazine and thanks to Ben’s efforts and against all the odds, it’s made an equally deserved return. “I really wish I could have saved the original shell, but I think I’d still be welding the floor into my retirement,” Ben laughs. “My main goal was to ensure the spirit of the original lived on.” We’d say he’s managed to do just that.

It’s that 24-valve Cosworth engine transplant that invited so much attention to this Cortina back in the day and Ben was keen for it to live on in this latest recreation too. The 2.9i V6 along with the previous engine mounts and ECU have been carried over, while an EGR delete, Ramair filter and bespoke 2.5 inch Keltec exhaust produce over 220 bhp, more than plenty in a Mk4 Cortina! “I made a few improvements to the routing of the hoses and cooling, fitting a bespoke Coolex radiator,” Ben points out, “I had to cut an aperture in the front panel in order for it to fit.” The beat of the original manages to live on with the addition of a few well-chosen modern-day improvements.

Carlsberg made Cortinas… Ben’s no stranger to building classic Fords but this one proved more challenging than most! Recaros with Carla centres look superb. Original WOO was featured in Classic Ford 20 years ago. The 24-valve BOA engine now looks right at home in the Mk4.

Well that's impressive. Steve Whittaker here, the owner from 2001-2005 when it was featured in classic Ford magazine.

I remember seeing it for sale a few years ago looking quite neglected, shame as it was in decent nick when I had it, but so pleased to see it's survived (even if it is a re-shell). Great job on the restoration.

Wish I could have kept it but I had a bit of a collection then and had just bought a new house so they all had to go apart from the Capri that I still have.

It was a hell of a weapon, I hope to see it at a show in the future.