Marriages of Italian styling and German machinery are a rarity, but the clever way Bertone clothed a 964-generation 911 showed how creativity and ingenuity from Turin worked well on a chassis from Zuffenhausen… Words Karl Ludvigsen. Photography Gruppo Bertone Archive.

The binomial of ‘Bertone Porsche’ is well remembered for the Italian designer’s racy roadster, based on the 911 platform and revealed at the 1966 Geneva Motor Show. This was a wonderful interpretation of an open two-seater in the Italian idiom, commissioned from the Turin coachbuilder by California Porsche distributor, John von Neumann, as an exercise to determine whether there was appetite for an open-topped 911. Von Neumann saw the resulting Spyder as having commercial potential, but the experimental project failed to mature. 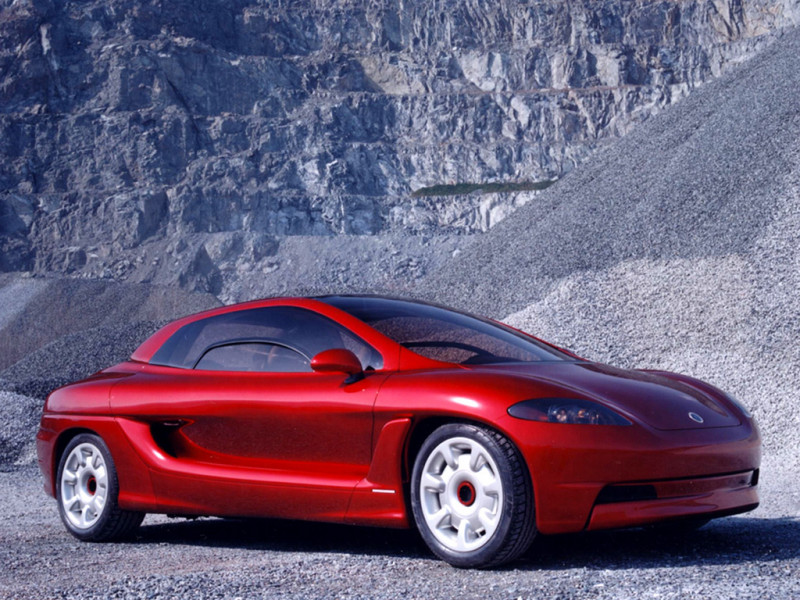 Twenty-eight years later, Bertone returned to the theme of an altered Porsche by developing a striking concept car deserving both admiration and respect. Geneva was again the venue for disclosure, and the Karisma was noteworthy for its adoption of a full four-passenger package at a time when Porsche’s abandonment of its own four-door saloon design (the Type 989, a precursor to the Panamera) was still bright in many memories. “In my entire career, I have never wanted a concept car to disturb my competitors or the major car manufacturers, who are also my clients,” Nuccio Bertone explained when outlining the rationale behind the project.

“I do not want to be considered a man who gives lessons to others. And so, with Porsche having abandoned its own four-seater sports car project, and given that such a solution has never been tried with the rear-engined 911, I decided to create the Karisma, safe in the knowledge I would not be disconcerting anyone.” With work on the design starting in April of 1993, the 964-generation 911 served as the basis for the creation. “Porsche has no direct role,” Bertone stressed. “I asked the company’s executives if they had anything like my project on the go. The answer was a resounding ‘no’. To ensure complete independence from Porsche, my team sourced a second-hand 964. In retrospect, if I’d asked Porsche for a 911, I probably would have been given one for free, but I was looking for total creative freedom, to be in the position to create a brand-new shape. I wanted a truly Bertone concept car, not just another face for the 911.”

Bertone strode confidently into new territory. Porsche itself had struggled to create a full four-passenger rear-engined car, despite experimenting with the idea at the back end of the 1950s, baulking at its implementation. Later, Californian marque enthusiast, William Dick, placed an order for a fourdoor 911 that broke no new ground in the design sense. As Bertone said, combining a longer 911 platform with radical new styling was an opportunity waiting to be exploited.

The Turin coachbuilder’s record qualified him eminently for the job. “We have always given special attention to concept cars with midship or rear engines, not just two-seat coupes,” the eighty-year-old decorated designer pointed out. “We’ve done the celebrated Lamborghini Marzal, and there’s another lesser-known concept, the Trapeze of 1973, which was powered by the NSU Ro80 rotary engine. Great projects, but I felt it was time to do design a car around Porsche’s lovely flat-six again.” Bertone’s mention of the Marzal was a reminder of one of his studio’s most stunning creations, made when his chief designer was Marcello Gandini. Displayed to an astonished world at Geneva in 1967, the car was rear-engined with a transverse six-cylinder twin-cam engine derived from Lamborghini’s V12. A full fourseater, the Marzal impressed with huge gullwing doors (for all four occupants) glazed both above and below its very low beltline. Bertone achieved the publicity coup of having the car driven around the Monaco Grand Prix circuit before the year’s race by none other than Rainer III (ruler of the Principality of Monaco between 1949 and his death in 2005) and his glamorous wife, the Hollywood actress, Grace Kelly (officially styled Her Serene Highness, Princess Grace of Monaco).

In its four-passenger layout and huge swing-up doors, the Karisma openly echoed attributes of the Marzal. Where the Marzal was angular, however, the Karisma was sublimely and sensually curvaceous. “We made four different scale models,” Bertone said, “all the time evolving and reviewing the Karisma shape. There is nothing that offends me or that I would like to change. The Karisma is interesting and, dare I say it, a very ‘Bertonean’ shape.” From every angle, the Karisma displayed unusual and innovative surface solutions, a Bertone hallmark through the years. The Porsche-platformed concept spurned the usual huge wheels of design studies to have tyres of a practical size, encroaching less on interior space. Stretched by almost twenty-one inches from the 964, the Karisma’s wheelbase was 110.2 inches. Overhangs were curtailed to ensure the increase in overall length was only a shade over nine inches. Width was increased by 8.3 inches — a function of the doors and voluptuous flanks — and height by a scant 1.4 inches.

ROOM WITH A VIEW

Especially striking was the Karisma’s upper, with its sweeping windscreen, overhead glazing and long side glass, eliminating the usual B-pillar. Inserts in the glazing were electrically lowered. Bertone was personally satisfied by the “glass greenhouse with its thin, rakish C-pillar. On sedans of this size and prestige we are used to seeing huge, bulky C-pillars. I am very happy with our solution, which is sporty and classy at the same time. I also like the double-curved backlight,” he added, “a detail my team finalised after working by trial and error on the styling models.” The rear window curved forward at its base, a subtly striking feature behind which were the concept car’s rear lamps. This ingenious design allowed the car’s rear end to be as smooth as a baby’s behind Instead of hiding the Karisma’s rear-mounted engine, Bertone flaunted it with a titanium-hued deck lid featuring air inlets and outlets marked by Powered by Porsche placards. Air also entered through side inlets, forward of which were blades to guide the flow along the body’s recesses. Brake cooling ports featured at the periphery of the Karisma’s nose, which otherwise was executed with masterful restraint.

Wearing Bertone badging at its nose, tail and along its door sills, the Karisma declared its independence from Weissach’s thinking. “We were not looking to present an evolution of the 911,” Bertone stressed. “Porsche has done that perfectly itself with the 964. Instead, we wanted to investigate the proportions and the surface treatment of a compact GT sedan. To this end, the Karisma isn’t a four-seat coupe, but a sporty GT sedan with a clear and welldefined tail.” Underpinnings were carried over from the 964 Carrera 2. As the Karisma was completed, its suspension travel diminished because its weight was higher (3,395 pounds against the donor 911’s 2,975 pounds) and stiffer springs were ordered to restore full wheel travel and concomitant ride quality. Had the Karisma been unveiled at the later Turin Auto Show as originally planned, the car would have been 550 pounds lighter, 220 pounds of which would have been contributed by the adoption of composite doors and aluminium panelling. The decision to bring the launch forward to the Geneva event meant Bertone’s team had to fabricate everything inhouse, hence the use of heavier steel throughout. Ultimately, this contributed to million-dollar expenditure and 34,000 man-hours of skilled craftsmanship.

The investment was especially evident in the Karisma’s interior, where the use of burled wood surfaces was consistent with the objective of a GT sedan. Porsche gauges rested in a wood-trimmed cove above a lower panel for minor controls and wood accents on the console. Wood also carried a console for rear-passenger amenities. Upholstery was in the loose-leather look that was then fashionable, and was given a dark-brown rattlesnake-skin surface treatment. Autocar journalist, Luca Ciferri, was given access to the Karisma soon after its unveiling. He found “reasonable space for the second row of passengers, despite the rear-mounted Porsche engine. The seats are very thin, to offer improved space for four passengers, but they are comfortable and supportive. Only once you are sitting in the car do you realize the bottom of the screen is so far forward that you have the same sense of space as in an MPV.”

“It comes as no surprise that the Porsche engine fires at the first turn of the key with a familiar, reassuring roar,” added Ciferri. “The engine revs quickly and the 6,100rpm redline is reached much sooner than expected. You need to give the clutch a hefty prod with your left leg and the gearshift could do with more refinement, though. The travel is too long, meaning fast shifts are out of the question, but the main inconvenience is that when you engage odd gears, your hand crashes into the dash. In the even cogs, you hit the central tunnel. A cure is, apparently, on the way, but the longer wheelbase means you always need more steering lock than in an ordinary 911 when turning corners. Once you’ve become accustomed to this, it doesn’t present a problem during normal driving, but it means parking can be a real effort. The introduction of power steering will be more than welcome.”

“With the longer wheelbase,” Ciferri reported, “the Karisma feels extremely stable and well behaved. Unwanted oversteer through corners is all but eliminated. At higher speeds, the Karisma shows off its efficient aerodynamics with wind noise audible from pretty well its side mirrors only. Maybe it doesn’t have the all-out driving appeal of the 964 it’s based on, but the Karisma still ranks pretty high.” High enough, in fact, to evoke disbelief that this design is more than twenty-five years old. In fact, Ciferri’s perception of the Karisma’s handling echoed that of the Porsche engineers who drove longer-wheelbase experimental versions of the 356. They found distinct advantages in handling and stability.

“This is definitely a car you enjoy driving,” concluded the Autocar reporter. The Karisma was a lovely concept that enjoyed no issue, then or later. Like its predecessor, the Marzal, the Karisma was (and remains) an attractive idea awaiting real-world exploitation.

Above Karisma was based on a Porsche, but took influence from Bertone’s 1967 Lamborghini Marzal concept, though the Marzal looks as impractical as the Karisma is realistic Left Powered by Porsche echoed the script seen on McLaren’s TAG Formula One engines. Above and below Breaking sharply with Teutonic conventions, the Karisma’s four-passenger interior trim was trimmed in wrinkled leather executed in a baseball-mitt configuration.

Facing page Karisma was based around a 911 964 Carrera 2 and kept the 911’s air-cooled flat-six, though the donor car was bought secondhand to maintain project independence from Porsche. Bottom left Nuccio Bertone with the finished Karisma (built entirely in-house from steel), the project’s conceptual drawings and the clay study model.

WEARING BERTONE BADGING AT ITS NOSE, TAIL AND ALONG ITS DOOR SILLS, THE KARISMA DECLARED ITS INDEPENDENCE FROM WEISSACH’S THINKING