The 1973 Alfa Romeo Giulia Super Tipo 105 is here as a representative of our family car class, but it could so easily have joined as a sports car, even in four-door Berlina guise. Much of the magical driving experience you can enjoy in the sportier members of the Alfa 105 family – the Giulia GT coupe and Duetto/Spider – applies in equal measure to the saloon. Therein lies the Giulia’s brilliance, and why it deserves a place in our Top 12 list. Turn the clock back to 1962 and the concept of a sports saloon was very novel, especially one with such compact dimensions and a relatively small engine. By the time you’d graduated to a saloon car it was pretty much admitting to the world that your youthful years were behind you. The Giulia was different, however: having four doors was no longer just for bores.

There was the way it looked, to begin with. Giuseppe Scarnati’s design might look like a simple three-box design from a distance, but get up close and you’ll see superb details like the furrowed brow of the front wings tailing off to the Kamm rear end. It was a functional shape, too: despite looking brick-like, it had a wind tunnel-honed drag co-efficient of 0.34. This helped deliver a 0-60mph time of 12 seconds in launch 1.6-litre form. That might not seem swift now, but in 1962 it was quicker than most outright sports cars. 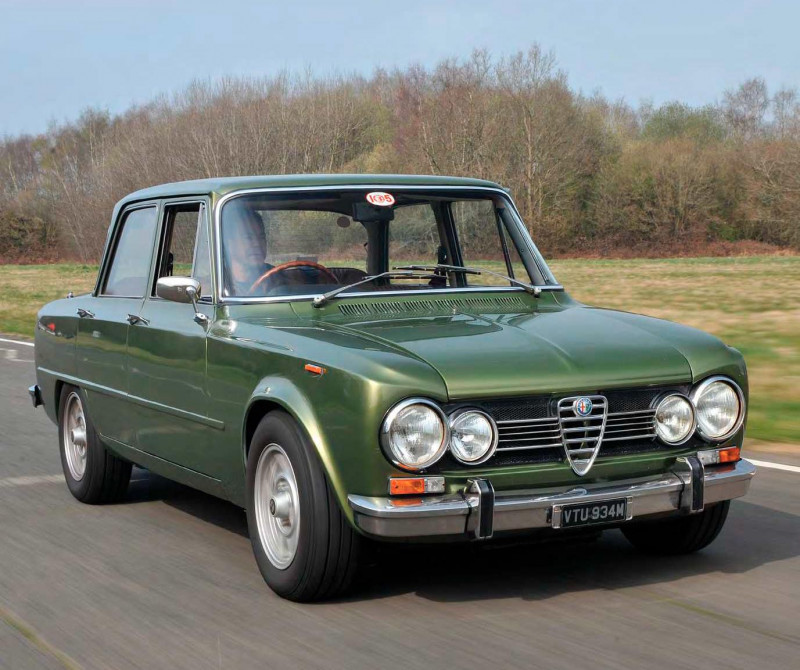 The owner of the Giulia Super on these pages, Giuseppe Minetti, uses it as a semidaily driver. Although it says ‘1.6’ on the back, it’s actually running a 2.0-litre engine, which delivers great pace and all the raucous thrills of twin-cam revviness, soaring with delight, all fizzing excitement and induction roar, accompanied by that traditional parp from the exhaust.

In the handling department, the Berlina is sharper than many sports cars. The light steering firms up beautifully, allowing the textures of the road surface to tingle up your arms and into your brain. There’s lots of grip, and little in the way of lean or pitch. Such is the infectious enthusiasm of the Giulia, and the 105 chassis, that it gets under your skin and has you begging for more. What starts as a simple drive turns into a fully engaged thrap. It just loves to be driven, and driven vigorously. It’s perhaps easy to under-estimate how much of a revelation this car must have been back in the early 1960s compared to its stodgy four-door rivals.

Arguably, the Giulia is the quintessential Alfa Romeo. While glamorous racers and special-bodied beauties might well tug at the heartstrings and dominate concours results, the reality is that for much of its life Alfa Romeo has been about humble cars: saloons, hatches and coupes, cars for the everyman rather than aristocrats.

The Giulia’s legacy is the DNA it infused in Alfa Romeos that came afterwards. For many decades, you could feel the same energetic fizz from the engines and the same light, precise, sharp steering. It’s certainly a recipe that other manufacturers learned from the Giulia. It’s hard to imagine BMWs gathering such plaudits for their handling and spirited performance had it not been for Alfa Romeo leading the way.