Some may question why the Alfasud rates such a lofty position as seventh in our top 12. After all, this is a car that could so easily have a tragic opera written about it, so troubled was its birth and its early life, as it returned to base mineral elements. The reason why the Alfasud is in seventh position – and why the tragedy of its reputation for rust is all the more acute – is because it’s an absolute cracker of a car.

Alfa Romeo took its time with its first front-wheel drive model. First mooted in the 1950s, work on the project only began in the late 1960s. The ’Sud would be built at a statefinanced new factory at Pomigliano d’Arco, near Naples, and was staffed by locals more used to feudal farming. That was another element of the Alfasud story that went wrong, but the factory remains important today as it’s still knocking out Fiat Pandas. However, it’s the way the Alfasud drives that makes it truly special. The flat-four engine is a raspy peach, all hissing anger and intent that turns into a vicious growl. Engines ranged from 1.2 litres to 1.5, all of them enjoying being revved as far as the needle would go, in good Alfa Romeo tradition.

The boxer engine also helped the Alfasud be a star around corners. The horizontal piston layout meant that not only could the bonnet line be lower, but so could the centre of gravity, meaning roadholding, grip and handling were a revelation. Helped by sophisticated MacPherson struts up front, a Watt’s linkage-endowed beam rear axle and rack-and-pinion steering, the ’Sud made all other cars in its class seem stodgy and inert. The fact that it also had inboard front disc brakes and rear discs was another bonus. The Alfasud Ti version that arrived in 1973 set the template for the hugely popular hot hatchback market for generations. Or would have done, but for a technicality: namely, it was launched as a saloon and didn’t acquire a hatchback tailgate until 1976. By then, the VW Golf GTI had become the de facto hot hatch, even though it was clear that Volkswagen had been directly influenced by the Alfasud. After buying this 1982 1.5 Ti X, Gary Orchard restored it to concours-winning condition. Having driven it, we can confirm that, compared to the much-heralded Golf GTI, the Alfasud Ti is a far better car to drive. Firstly, the Alfa brakes much better than the Wolfsburg machine, and its light and crisp steering makes the Golf ’s heavy, unassisted equivalent feel like opening a rusty porthole on a submarine. And by the 1980s, the Alfasud Ti had the raw punch (105hp) to compete as a hot hatch, too. 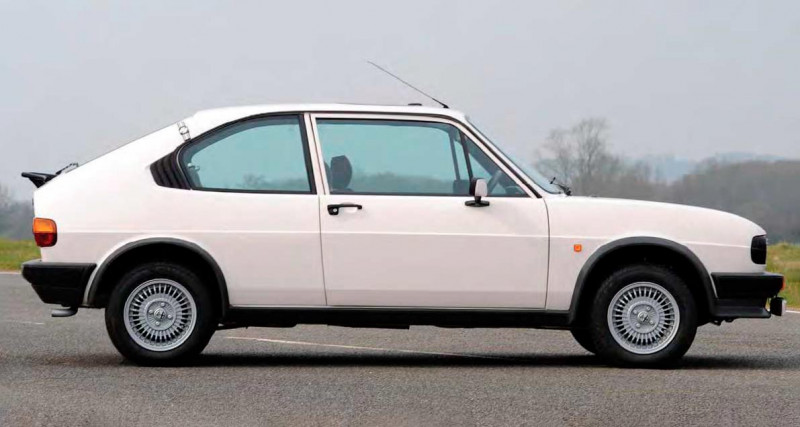 Over 50 years on, the Alfasud still does the business; it’s a car that feels ahead of its time. The steering is traditional Alfa, even though the driven wheels are up front. Throw the ’Sud at some corners and it’s light, agile and nimble; the steering is uncorrupted and the nose never wants to plough straight on.

The Alfasud initiated the philosophy that, in the same way that the Mini democratised sporty driving in the small car class, even in its most basic guise driving should be about fun rather than a mere chore. In Ti form, it remains the quintessential hot hatch that set the DNA, driving dynamics and guiding principles for everything that followed.