As one of our two ‘wild card’ brand new car entries, the Alfa Giulia Quadrifoglio holds its own with effortless ease. Even the regular Giulia Q would easily have made our Top 12: after all, it is comfortably Alfa’s greatest car of the last decade: Ferrari-developed 510hp V6 twin-turbo; dedicated Giorgio platform with sensational steering and suspension; lightweight carbon goodies; we could go on and on.

But great though the Quad is, we can’t ignore the fact that the first examples of the evolved limited-production GTA and GTAm are now starting to arrive on UK shores. We simply had to invite the GTAm along as the best Alfa currently on sale.

The GTAm is a truly sublime animal, one that’s surprisingly different to drive than the regular Quad. The recipe for the ‘Gran Turismo Alleggerita’ is beyond mouthwatering. With a thinner windscreen and carbonfibre for the front bumper and wings, the GTA sheds 50kg in weight. The GTAm version goes 50kg further with a stripped-out, two-seat interior and Lexan windows, plus a more extreme aero package. Under the bonnet, tweaks to the 2.9 V6 engine deliver an extra 30hp of power, taking it up to 540hp. Chassis upgrades include a wider track, unique 20-inch centre-lock wheels, Michelin Cup Sport 2 tyres, lighter springs, unique dampers, different suspension geometry and uprated bushes. Today we have a two-seat GTAm to admire, assess and adulate. What makes it special is instantly apparent on start-up, as you sense the difference the bespoke Akrapovic titanium exhaust makes through its centreexit exhaust pipes: a harder, raspier and yet more cultured sound than the Q’s. 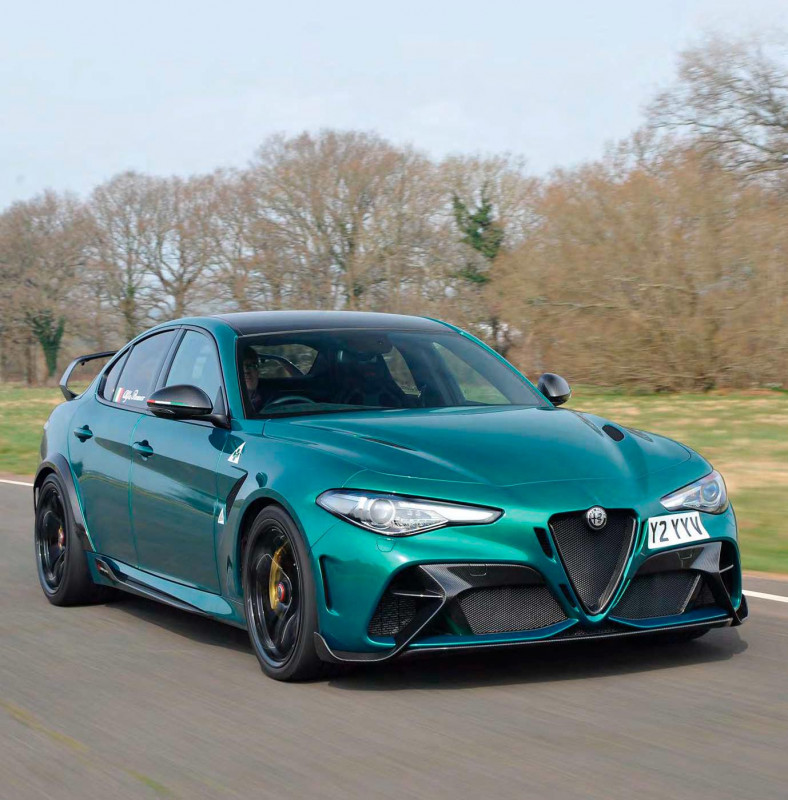 In motion, you understand how much pointier the front end feels right from your very first corner. The steering feel is beefier and more direct. The car just goes where you point it; it’s the biggest single improvement of the GTAm. While the suspension is stiffer than the Q’s, it’s still very compliant. There’s less understeer, less body roll and more grip, which considering the regular Quad is so epic in all these regards is something of a revelation. The GTAm represents not a mere upgrade but a distinct experience in its own right. On track, it comes into its own even more keenly; as one professional racing driver put it: “I’d rather have a Giulia GTAm than a Porsche 911 GT3 RS.”

While the Giulia Q generates positive vibes, the GTAm blasts them into every cranny of doubt. To say it straight: we love everything about the GTAm. Except, that is, its price tag: north of £150,000, versus £74k for the standard Q. But then the GTAm is an extreme rarity. The UK was allocated 70 of the 500 cars that are being sold worldwide, but it’s thought that fewer than half that number have in fact been snapped up here; other, keener, markets got ‘our’ allocation (shame on you, British Alfisti!). That means right-hand drive GTAs will be guaranteed blue-chip classics in years to come.

If you hadn’t guessed already, we rate the Giulia Quadrifoglio as a true star here at Auto Italia – and the GTAm version is peak Alfa, pure and simple.