‘Black Series’ is AMG shorthand for the most hardcore variant the company will build. This fourth model wore the moniker like a flak jacket.

Two doors, two seats, and a load of race-bred attitude. This is one atmo V8 collectible that really is a keeper

When the W204-generation C63 AMG arrived in Australia in sedan and wagon forms in 2008, it put AMG properly on the map. Packing a 336kW 6208cc M156 V8 – with a stump-pulling 600Nm of torque – this was a bad-ass Benz that shredded rear tyres at will, punched holes through time and had a raucous soundtrack that tore the heads of beers when blasting past the pub. At the wheel, the sound made the punch utterly addictive, the throttle a volume switch that meant the C63 could be heard coming from blocks away, its blast sending a shockwave that echoed long after it had left the scene in a mysterious haze of smoke… 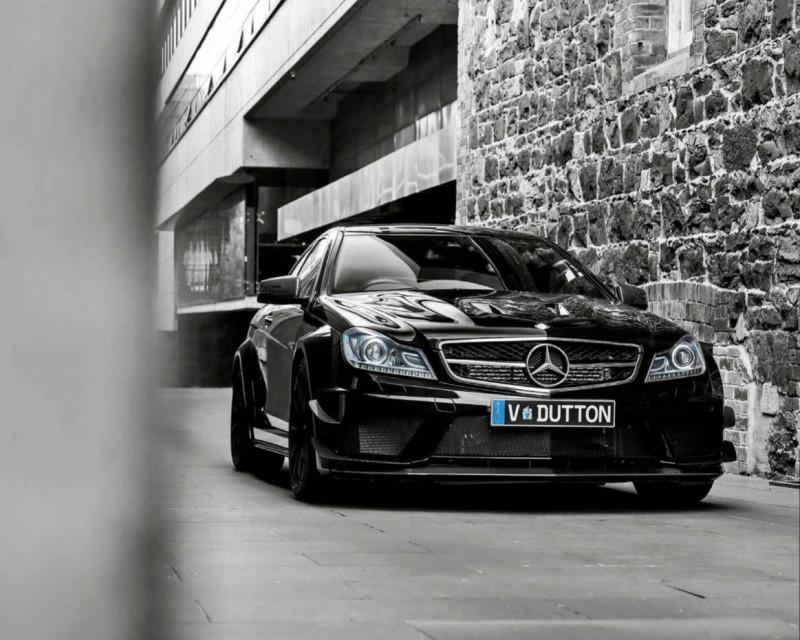 Yet it wouldn’t quite topple the king: the BMW M3. Riding on a platform of proven racing pedigree, the E92 was a sharper, more precise tool than the extroverted Benz. The delectable metallic rustle from its 4.0-litre 309kW V8 grew as it spun to 8300rpm – beyond the C63’s 6800rpm redline – but it never bellowed quite like the bellicose AMG’s V8. Both were salivating performance cars but carried out their role in different ways: the Mercedes was the great entertainer, but the BMW was the more accomplished, complete performer. 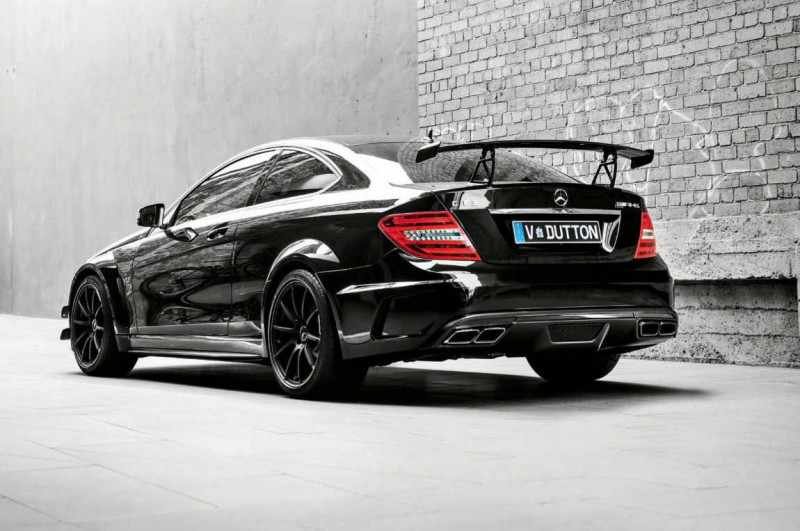 That was until the arrival of this, the C63 Black Series; a seriously hardcore variant which was the most powerful C-Class ever built. It’s a title it still holds a decade later. Now it was game on. 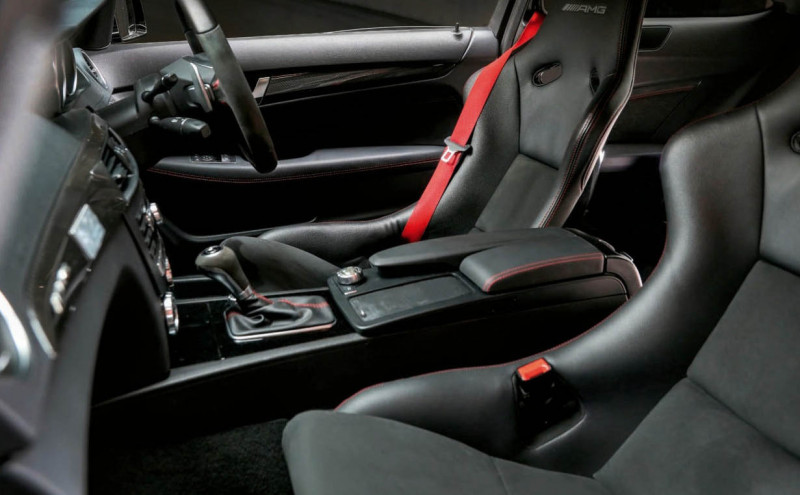 The C63 AMG Black Series came out of the AMG Performance Studio that was created when Mercedes took outright ownership of AMG in 2005. That’s when a confident, ambitious factory-backed AMG began development of its very first in-house engine, the M156 V8, which spearheaded an arms race with BMW’s M Division and Audi’s strengthening RS department. Not only did AMG’s new parentage enable the V8’s development, it also saw a stronger line of ultimate performance models: the Black Series badge was a way of delivering more exclusive, track-oriented versions of the brand’s most potent machinery to thirsty buyers.

The C63 Coupe (C204) was the starting point for what would be the fourth Black Series model. The first was the 2004 SLK 55 AMG with its unique fixed roof, followed by the 2007 CLK 63 Black Series before the SL65 was given the Black treatment in 2008. 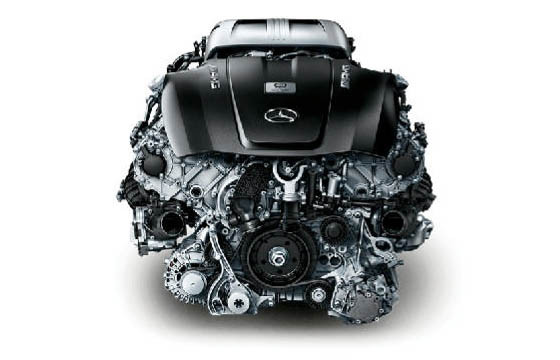 To earn Black Series status, three conditions had to be met: a fixed roof, two doors and two seats. The C204’s arrival meant the C-Class had the mandated coupe body that made the Black Series possible. Now it just needed to ditch the back seat and add the track elements. That started with the Black’s menacing body, widened by 56mm up front and 84mm out back with pumped guards, fronted by a vented bonnet and unique bumper. Revised suspension geometry and recalibrated hydraulic steering gave the Black Series the front-end intimacy that the regular C63 lacked, connecting to 19-inch rubber and six-piston 390mm cross-drilled brakes. 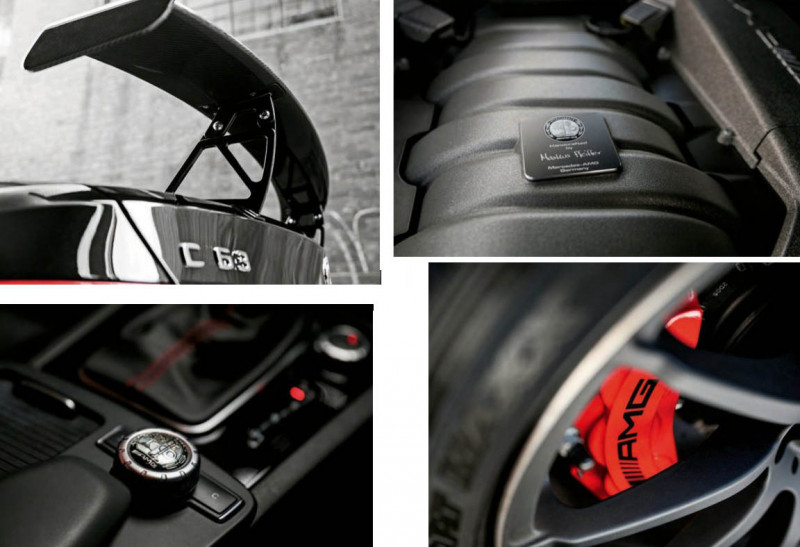 There were six-way adjustable coil-overs at all four corners, while the rear axle was taken from the E63 sedan including its clever locking limited-slip diff and 360mm brakes, capped by wider rear guards, unique rear diffuser and quad exhaust. The larger adjustable rear spoiler came in tandem with the cabin’s shell seats – which can be optioned out – otherwise the Black Series has a subtle carbon lipspoiler instead.

Yet it was all about harnessing that hand-built 6.2-litre, which for a time, was the most powerful naturally-aspirated V8 on the planet. Technically 6208cc, the M156 was badged as a 6.3-litre as homage to the 6332cc M100 engine, Mercedes’ first production V8, which powered the original 300 SEL ‘Plastic Pig’ that AMG raced to class victory at the 1971 Spa 24 hours.

The M156 90-degree V8 – AMG’s debut clean-sheet engine –first appeared in the MY07 W211 E63 and was a closed-deck design with an aluminium block and heads. It also used ‘Nanoslide’, the name for the world-first twin-wire-arc cylinder coating, while all M156s boasted variable valve timing on both inlet and exhaust sides. The new engine also reverted to a single spark-plug per cylinder, unlike the twin-plug M113K that came before it.

What also made it so remarkable beyond that gloriously uncouth exhaust note was an overall mass of just over 200kg, making it within three kilograms of the M3’s smaller 4.0-litre S65 V8 – quite remarkable. For the Black Series, the award-winning engine was treated to a 50-percent larger oil cooler, but where it really lifted its game was with a new ECU that managed the lightweight forged crank, forged conrods and forged pistons taken from the flagship SLS’s M159. The lighter internals could spin to a raucous 7200rpm redline, 400rpm above the regular C63, where they’d been available as a Performance Pack option from 2010.

The Performance Pack delivered a rise from the standard C63’s 336kW to a brawnier 358kW, but for the Black Series power spiked to 380kW – the most powerful C-Class ever built. The Black also added 20Nm for max torque of 620Nm, making it break traction – and M3 drivers’ hearts – any which way it sought.

That torque was needed because at 1635kg, the Black Series still carried significant heft, even after the removal of the back seat saved 20kg (you could re-option it, but honestly…). Around the cabin, there wasn’t the Nappa leather, sunroof or the brushed aluminium of the regular C63 either. Instead, the front leather electric memory chairs were traded for lightweight shell buckets complete with provisions for racing harnesses – and requisite red stitching and matching red seatbelts.

As the sports-luxury persona gave way to die-hard racer, a three-spoke wheel that was both flat-topped and flat-bottomed kept your hands well-placed for the paddle shifters that commanded the seven-speed dual-clutch transmission – which benefitted from AMG’s own clutch packs for swifter changes before feeding grunt rearwards. Also managing the fire and brimstone was the three-mode ESP, which could be completely switched off, prompting your local tyre shop owner to add another storey to their house each time you did so. For the ultimate take-off, the Black Series’ Launch Control ensured it optimised its 19-inch Continental rubber. Performance? A claimed 4.2sec 0-100km/h sprint as it took the standing 400m in 12.0sec flat and a governed – yes, governed – 300km/h v-max. It was sharp, instant and more fun than Oktoberfest.

To play devil’s advocate, that brisk 4.2sec was only two-tenths better than the regular C63 Coupe, but this grew to a 0.8sec advantage over the quarter as it stretched its legs. Yet the Track Pack option – which added stickier Dunlops and a rear-axle trans cooler – saw sub-4.0sec results from some media tests, but more importantly confirmed the Black Series as a commanding cornering machine.

Enter its closest natural rival, the BMW E92 M3 GTS. If you remember this searing orange Leviathan, with its 4.4-litre stroked V8 packing 331kW, it too was M-Division’s track-honed race weapon. Yet while there was little between the GTS and the Black Series on paper, the AMG had the edge when it came to point-to-point capability.

The Nurburgring Nordschleife lap battle saw its 7:46 time a clear four seconds ahead of the GTS – with the same Horst von Saurma at the wheel of both cars. Again, an optional Aerodynamics Package promised potentially better lap times, but AMG never specified just how much additional downforce it created.

Sadly we can’t compare these two on local racetracks, as none of the 150 M3 GTSs built in Munich made it to Australia. The 32 C63 Black Series initially delivered here sold out before they were built – prompting Mercedes Australia to order more, but it could only secure another 10, despite additional customer orders.

The C63 Black Series’ desirability came from both its ferocious straight-line strength and unique apex-hunting prowess.

Uncompromising, brutish, even less civilised that a regular C63, it was maniacal, extroverted and unashamedly loud all while feeding its driver a comprehensive set of markers – from sight to sound, steering to brake feel – in a signal set like no other C-Class before it. Punch now came with precision; the sledgehammer now laser-guided.

As the automotive world continues to downsize, electrify and devour SUVs and cumbersome pick-ups, there’s been no successor to the C63 Black. With the AMG GT taking over the fixed-roof, two-seat, two-door role since 2014, apparently there’s no longer a need for a track-focused C-Class. Yet there’s so much lust for such a car like the C63 Black Series, one that unashamedly shocked and awed from bonnet to bootlid, created during a critical period in AMG’s history. That alone means there’ll never be another car like it, from anyone anywhere.

The C204 C63 and E92 M3 are enshrined in history as the last naturally-aspirated V8 German coupes, and while their successors both saw downsized turbocharged engines, they followed markedly different paths. The F80 M3/M4 swapped V8 power for the admittedly excellent S55B30 twin-turbo 3.0-litre straight-six, but its soundtrack went from Nirvana to NSYNC. Meanwhile, Affalterbach introduced the M178 bi-turbo 4.0-litre V8 complete with head-turning trademark bark. Then AMG boss Tobias Moers understood what M-Division didn’t: “The sound is part of the brand.”

It was all about harnessing that hand-built 6.2-litre engine which, for a time, was the most powerful naturally aspirated V8 on the planet

Australians all let us rejoice, for we love AMG. The Black Series came as AMG was in a state of expansion – and sales Down Under showed we couldn’t get enough. With the C63’s arrival in 2008, a staggering 7500 C63s were sold across all body types in a single calendar year, the coupe arriving in 2012. In 2021, AMG models made up 30 percent of all cars sold by Mercedes-Benz here – meaning AMG alone outsold brands including Jaguar, Porsche, Jeep, Peugeot, Land Rover and Alfa Romeo.

Indisputably the rarest, fastest and most potent C-Class to this day; last of the atmo V8s; lack of successor cements its place in history.

Not for the meek; track intentions compromise daily road use; no manual transmission; unreliable if not meticulously maintained.