Crucial doesn’t begin to describe how significant the new Tonale is to Alfa Romeo. But how does it drive – and will it satisfy Alfisti? We head to Italy to find out.

There’s a collective ‘WTF?’ moment among the assembled UK journalists when one of the Tonale development team declares that it’s “the sportiest Alfa Romeo ever”. Did he really just say that? And while I hate to spoil the surprise or rain on any parades, this mid-size SUV will never outpace a Giulia GTAm around Balocco or outshine a 33 Stradale on a mountain road. But you already knew that, right? 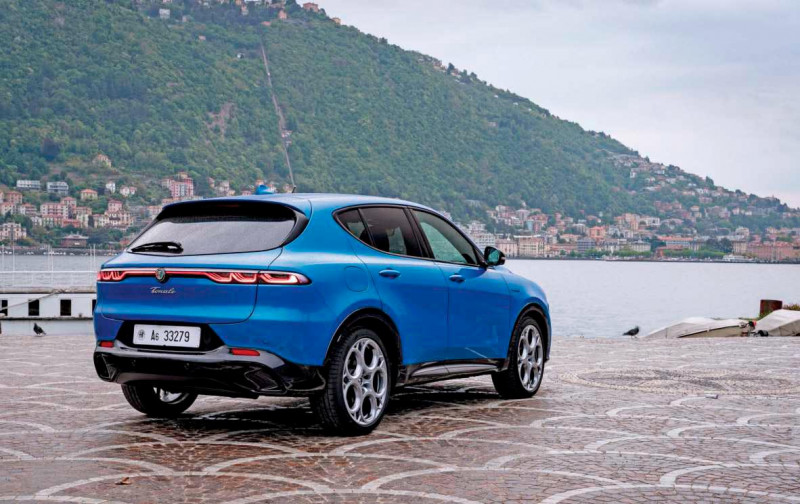 We’re familiar with the business model by now: make your money with SUVs, then add a smattering of sporty cars to bolster the brand image. Porsche pioneered the idea with the Cayenne. Maserati, Lamborghini and even Ferrari are following suit. While Alfisti might yearn for a new Giulietta or Giulia Sportwagon, market forces have given us the Tonale. Competing in the medium SUV segment – responsible for a staggering quarter of all new car sales – it desperately needs to succeed.

“My first impressions are of calm refinement. The engine is quite muted. But a true driver’s car the Tonale is not”

Fittingly, our press conference takes place at the imposing Tempio Voltiano alongside Lake Como, where Alessandro Volta invented the first battery. Alfa Romeo’s charismatic CEO, Jean-Philippe Imparato, take centre stage and outlines an ambitious plan, including “a new car or big product event every year until 2030”. The Tonale, he says, represents the start of a new era: Alfa Romeo’s first step on the road to becoming fully electric and CO2-neutral by 2027. 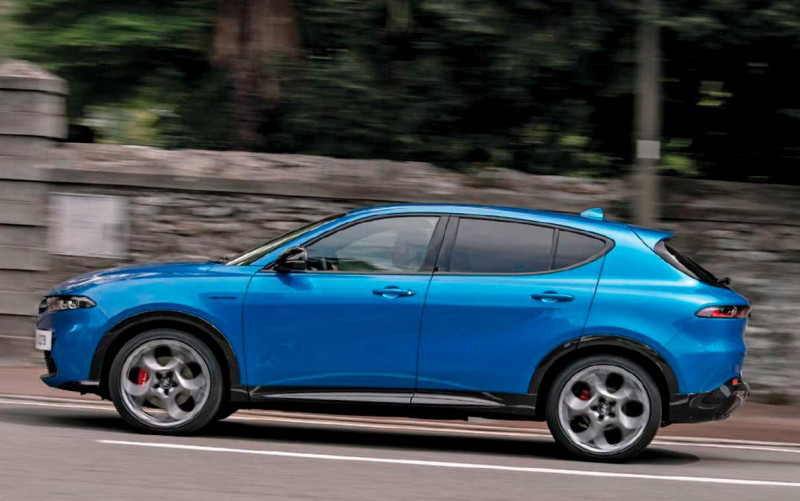 The launch engine is a 160hp ‘self-charging’ hybrid with a variable geometry turbocharger and 15kW electric motor (there’s also a 130hp version with a conventional turbo but that won’t be sold in the UK). Driving the front wheels via a seven-speed dual-clutch automatic gearbox, it returns close to 50mpg and CO2 emissions as low as 130g/km. I suspect Alessandro Volta would have waited for the 285hp plug-in hybrid that’s due in December this year, with four-wheel drive, a 373-mile range and just 35g/km of CO2. 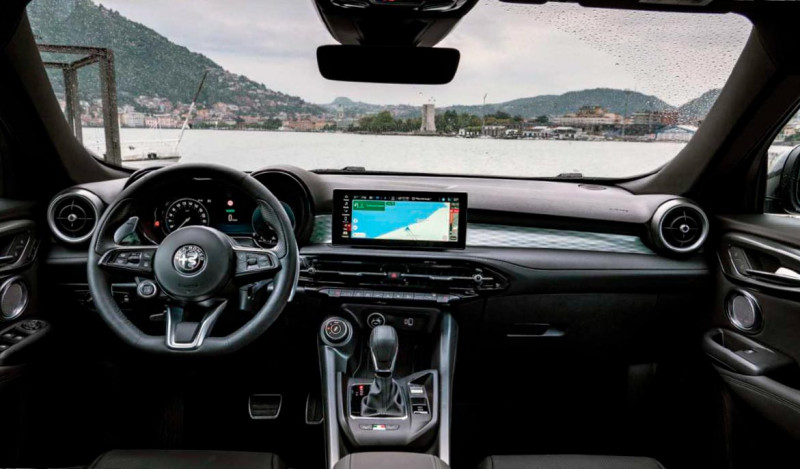 UK Tonale orders will open in July, with the first deliveries expected in September. Prices hadn’t been confirmed as we went to print, but expect to pay upwards of £35,000 (or £50,000 for the plug-in hybrid). Three trim levels are offered in the UK: Ti, Veloce and the Speciale launch edition. Standard kit on the Ti includes 19-inch alloys, automatic headlights and wipers, sat nav with Apple CarPlay and Android Auto, parking sensors, a rear-view camera and a powered tailgate. The Veloce adds red Brembo callipers, aluminium shift paddles and Alcantara trim, while the fully-loaded Speciale comes with dual-stage DSV dampers and 20-inch wheels.

Another (currently unique) feature is the nonfungible token, or NFT, issued with every Tonale. Based on tamper-proof blockchain technology and accessible via the Alfa Connect app, it’s essentially a digital certificate that records the car’s specification, servicing and maintenance work. Daniel Tiago Guzzafame, head of product for the Tonale, says he is “convinced it will completely change the used car market within the next three years. The NFT makes things very easy and transparent for both the buyer and seller.” You heard it here first.

Our test car is a Veloce that’s effectively been optioned up to Speciale spec. Its polished Teledial rims are carried over unchanged from the 2019 Tonale concept car and look fantastic, filling the roomy wheelarches on square-shouldered Pirelli P Zero tyres. Alfa Romeo’s lustrous Misano Blue paint is another must-have for me, although the deep Visconti Green metallic comes a close second.

Interestingly, when I collect the keys, my Tonale is parked alongside an Alfa Stelvio – and makes its big brother look rather dated. Their overall shapes and design language are very similar, but details such the Tonale’s six-headlight graphic – a nod to Alfa’s SZ – and full-width rear light bar make it seem palpably more premium. 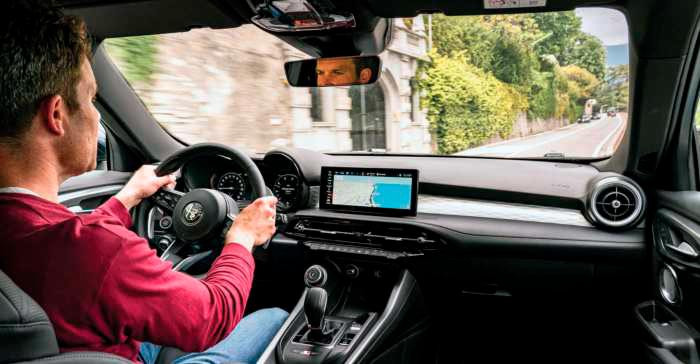 So, Alfa Romeo has won its first battle for the hearts and minds of Audi Q3 and BMW X1 buyers, and stepping inside shouldn’t prompt a retreat to German conformity. The Tonale’s cabin is stylish, driver-focused and well made, with any coarser and cheaper plastics limited to areas you rarely touch. There’s enough space for five tall adults and a 500- litre boot with an underfloor storage area. Safe to assume that this will be packed full of batteries when the plug-in hybrid arrives.

Finding a good driving position is easy and the traditional Alfa Romeo cannocchiale instrument binnacle is instantly evocative, particularly if you switch to the classic Veglia-style, white-on-black digital dials. Frankly, they should be compulsory.

The Tonale’s central 10.25-inch touchscreen has super-sharp graphics and isn’t so large that it feels overbearing. Its Android operating system powers a 14- speaker Harman Kardon audio system and receives over-the-air updates via 4G connectivity. You can also use voice control via Alexa, plus it will sync with compatible devices in your home. For example, you could be in your kitchen and ask Alexa how much fuel your Tonale has remaining – or even unlock the car remotely to receive a parcel delivery.

Unlike the forthcoming PHEV, the Tonale hybrid doesn’t have any meaningful electric range. Its 135Nm electric motor can power the car for only short distances at low speeds, such as for parking or stop-start traffic jams. Alfa Romeo calls this ‘e-creeping’, which sounds like a particularly sinister form of online stalking, but the process is automatic and utterly unobtrusive.

Indeed, as I head into the hills above Lake Como, my first impressions are of calm refinement. I’d skip past the ‘A’ (Advance Efficiency mode) on the DNA dial, as it softens the throttle pedal to the point of lethargy. N-for-Natural is a much better compromise, with relaxed responses for smooth progress. The 1.5-litre engine is quite muted and, unlike Toyota or Lexus hybrids, there isn’t the drone of a CVT gearbox to endure. The combination of mechanical and regenerative braking (the latter to charge the battery) feels pleasingly progressive, too.

Hang on, though, this is an Alfa Romeo – so does it deliver as a driver’s car? Acceleration is merely brisk (0-62mph in 8.8 seconds), but the added e-boost from the electric motor makes it feel faster. Switch to D-for-Dynamic mode and the steering feels notably more positive as well. The Tonale turns in keenly and without excessive body roll, but push harder and you’re greeted with understeer, the inside front wheel scrabbling for traction and a gearbox getting flustered in its quest for the right ratio.

Of course, you can take control using the long tactile paddle shifters, and the dual-stage dampers fitted to my car (developed with Marelli) keep the Tonale taut and focused. The pay-off, though, is a very firm ride, which would likely feel downright uncomfortable on poor UK roads. My preference is for Dynamic mode with the dampers on their soft setting (not unlike piloting a Ferrari in Sport or Race with ‘bumpy road’ button pressed). With this set-up, driven at eight-tenths, the Tonale is an enjoyable machine. But a true driver’s car it is not.

Does that matter? Not especially. Dynamic prowess is low on the priority list for most buyers of C-segment SUVs. But the Tonale is certainly up there with the class best in this regard. It also looks smart, feels premium, is spacious enough for family life and comes with all the connected tech that customers expect. Let’s hope it sells by the million and funds some exciting new Alfa Romeo saloons, hot hatchbacks and sports cars. We shouldn’t have long to wait.

Classic Alfa instrument binnacle houses digital dials that can be configured to look like a 1960s Giulia. Teledial wheels look great but ride quality isn’t class-leading – and nor are driving dynamics