It might have a name sounding like a remastered Phil Collins album, but Porsche’s Platinum Edition serves to give the Panamera an injection of new life in the face of stiff competition from sector rivals, not least the Taycan. We get behind the wheel of a Panamera 4 E-Hybrid treated to the new trim…

Ever since the Taycan arrived on the scene, it’s been hard not to feel sorry for the Panamera. The all-electric Porsche is a hugely impressive machine, there’s no argument there, and it’s absolutely a car for the moment. After all, who would have thought an electric Porsche would be not only so well received, but so desirable right from the off? This isn’t something which could be said for the Panamera when it arrived on the scene many years beforehand. Thirteen years, to be exact. The first-generation Panamera wasn’t the prettiest of Porsches. More to the point, it didn’t quite meet the ‘four-door 911’ image many marque enthusiasts had in their heads. Remember the 989 concept? Now that was a proper four-door 911. Still, the Panamera filled up Porsche showrooms alongside the Cayenne and left dealerships just as quickly. 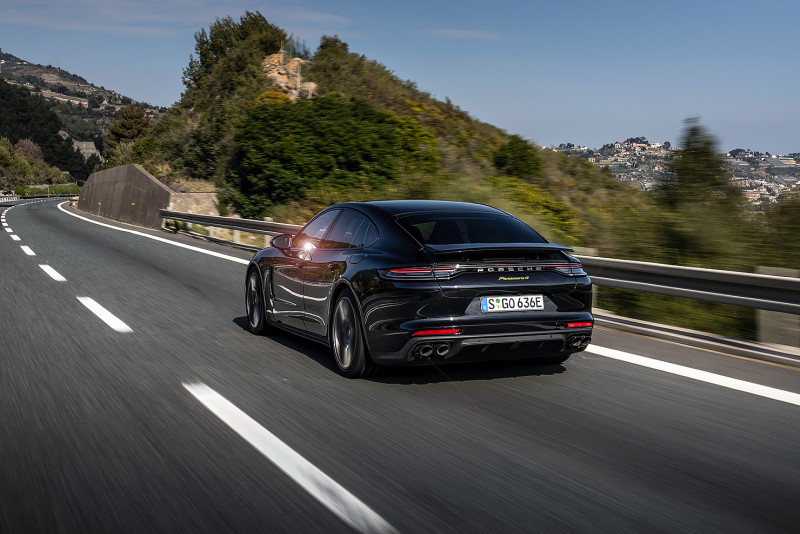 Skip forward a few more years and the second-generation Panamera made much more of an impact. Despite small increases in size in every direction, it looked much leaner and was closer to being the fabled four-door 911. Sports car pedigree was on offer, too, with the Panamera Turbo S E-Hybrid delivering performance leaving a BMW M5 with tail between its legs. There’s also the added bonus of a second body variant in the form of the Sport Turismo. Normally, the Panamera can swallow up to 403 litres of cargo, increasing to 1,242 litres when the rear seats are tilted down. With the Sport Turismo, you get not only a gorgeous design, but also a slightly larger boot, checking in at 418 litres, with a potential maximum of 1,287 litres. With the Taycan arriving when buyers finally seem ready and willing to switch to electrification — as much for performance and tax improvements as environmental benefits — the Panamera must fight harder than ever to remain both desirable and relevant.

USING ONLY THE ELECTRIC MOTOR QUICKLY BECOMES AN ENJOYABLE PRACTICE, EVEN FOR DYED-IN-THE-WOOL PETROLHEADS 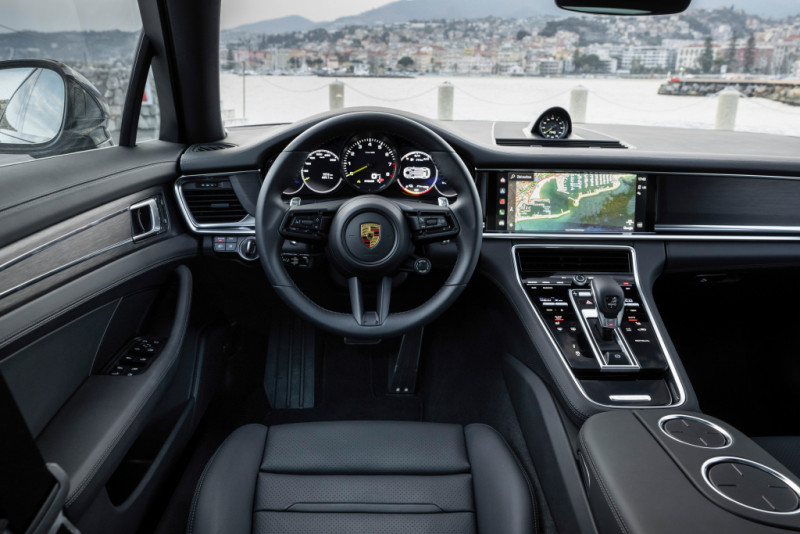 Porsche likes to think it knows its customers — it has one of the best customisation offerings to please those willing to be creative beyond what the standard online configurator can muster. The new Panamera Platinum Edition owes much of its existence to those thousands of customers and the endless hours of configurator times and in-dealer visits. Porsche sifted through huge piles of data to distil the things its customers seem to want in a Panamera. The Platinum Edition is the result.

The new specification made its debut at the Los Angeles Auto Show last year and is available to order as a trim option for the Panamera 4 and 4 E-Hybrid, along with Sport Turismo variants using the same powertrains. Porsche describes the Platinum Edition as “a perfect mixture of luxury, comfort features and exclusive design highlights.” In plain English, it’s a tastier specification grade, which, in the case of our Panamera 4 E-Hybrid test car, carries a price premium of £8,140 over the non-Platinum version.

Among the highlights are a set of tasteful Platinum-painted twenty-oneinch Exclusive Design Sport alloy wheels, which contrast beautifully against Jet Black paint. Emphasising that darkened look are high-gloss-black side window trims, privacy glass and black sports tailpipes. Exclusive Design taillights round out the rear.

Look a little closer and you’ll notice Porsche applies Satin Gloss Platinum highlights to its logo and model nameplate at the rear, to the air outlet trims aft of the front wheels and, in the case of the hybrids, to the script badges on each side. Small details, yet tastefully done in typical Porsche style. LED headlights with Matrix functionality are another nice addition to overall specification and come into their own when driving on unlit sections of motorway in the middle of the night.

Pop open the door (Comfort Entry is standard) and you’ll spot brushed aluminium door sill guards carrying the Platinum Edition script, reminding you there’s something a little bit special living on your driveway. The same brushed aluminium effect is applied to key elements of the interior. If you haven’t sat in a Panamera recently, do so at once – this Porsche makes use of a superbly designed and generously proportioned cabin. Comfort front seats provide fourteenway adjustability. Memory function is a feature, as are headrests embossed with the Porsche crest. Importantly, these seats feel superb from the moment you slide into them.

Facing you is the GT sports steering wheel, nicely sized with just the right number of controls, leaving you with a clear view of the instrument cluster. The configurability of the outer pods is a lovely touch, and they complement the analogue rev counter in the centre. As long as you’re running off the battery in ‘e-power’ mode, the needle stays at zero, obviously.

The centre console remains packed with controls, but these days, the button count is far lower than in earlier Panamera models. This is no bad thing. On the entertainment side (aside from driving), is Porsche Communication Management (PCM), featuring online navigation and voice control in addition to connectivity for your mobile device. The system is easy to get around, with Apple CarPlay adding a further layer of user friendliness, though the omission of Android Auto may irk some of you.

Easing away in the Panamera 4 E-Hybrid under only its battery power demonstrates how nice this thing is to drive, even when ambling around town. An electric driving range of up to thirtyfive miles (rated under the more realistic WLTP conditions) is possible and is a notable improvement over the outgoing Panamera 4 E-Hybrid’s range, though we shouldn’t lose sight of the fact the earlier model was packing a 14.1kWh battery. With the newer Panamera, you get the option to stay in full electric mode until the 17.9kWh battery depletes, or a charge hold, which retains a pre-set level of energy in the battery for use during a later part of your journey. The 100kW (134bhp) electric motor comfortably propels the Panamera around the place. It can even cope with motorway speeds, though this is a surefire way to drain battery charge quickly. a pleasant ride quality thanks, in part, to Porsche Active Suspension Management (PASM), which makes light work of most surface imperfections.

The instant dollop of torque masks the Porsche’s 2,210kg weight, though this is a car feeling substantial, rather than heavy. Solid, as if hewn from one enormous billet of metal. You don’t need to cover many miles to understand why the Panamera has such broad appeal. The potential of returning 141 miles per gallon and favourable benefit in kind rates don’t hurt, either.

Using only the electric motor quickly becomes an enjoyable practice, even for dyed-in-the-wool petrolheads. Instant response and a fill of torque right away can be smile-inducing, even in urban confines. This Porsche feels stealthy, as if flying under the radar due to the near silence. As relaxing as driving with zero tailpipe emissions can be, twisting the driving mode selector is awfully tempting, especially because, when the 2.9-litre twin-turbocharged V6 barks into life, it adds another layer of excitement to the Panamera’s terrific everyday performance. The force-fed V6 is a sonorous thing, not as vocal as the V8 slung into the Panamera Turbo S, but engaging enough, nonetheless.

The Jekyll & Hyde nature of being able to combine both motors simultaneously transforms the Panamera from comfortable cruiser to high-performance bruiser. In the right situation, this car is savagely quick and has an abundance of grip to give drivers the confidence to explore the full bandwidth of power. Maximum outputs of 456bhp and 516lbft are not to be sniffed at.

From a standing start, and with Sport Chrono activated, only 4.2 seconds will pass before 62mph flashes up. 12.5 seconds later, you’ll see 124mph tick past (where permissible, of course!). Throughout this dynamic onslaught, the driver’s seat holds you in place with as much grip as its four corners can muster. When you get the Porsche out onto more challenging roads, however, its mass does begin to make itself known.

This aspect is clear when scrubbing off speed in a hurry, even though there’s plenty of bite from those luminous six-piston aluminium monobloc fixed calipers (deletion of the Acid Green colour is a no-cost option if you want to keep a slightly lower profile). Pedal feel is reassuringly positive, something often lacking in plug-in hybrids due to how they recuperate energy back to the battery. Nevertheless, you are often aware of how hard the brakes are working to dissipate higher speeds whilst keeping everything in check from a directional perspective.

This is largely dependent on the frequency at which you’re exploiting the full extent of the electrified powertrain. In reality, the Panamera 4 E-Hybrid is better suited to covering the day-to-day travel needs at six or seven tenths pace. Good thing the steering is still a strong point in the Panamera’s repertoire. In fact, it’s sublime. Porsche remains one of the few companies to produce steering feel excellent at any speed or situation. Another real highlight is the way in which the eight-speed PDK transmission operates — in particular, how it works when the Panamera reverts to its Hybrid Auto setting when battery charge depletes.

There are some who would suggest the arrival of the Taycan could call last orders for at least the Panamera 4 E-Hybrid. After all, the Taycan is sleeker, faster and goes the whole hog with an electric powertrain. That said, some Taycan owners will still be hamstrung by a public charging network struggling to keep pace with the mass adoption of EVs. The Panamera may have a significantly shorter battery range than the Taycan, but filling up the petrol tank is never going to be more than the work of a few minutes and you won’t need any special smartphone apps or club memberships. Thanks to its size, charging the E-Hybrid’s battery at home or work doesn’t take that long, either. The 7.2kW onboard AC charger is ideal for most home-charging setups, though it can’t use the full potential of the wider public charging network, which can often supply up to 22kW on AC. Porsche is aware of this and even recommends its plug-in hybrid models “are preferably charged at home”.

The Porsche plug-in hybrid powertrain is not only an attractive proposition from the perspective of sheer desirability, but also the reduced cost of ownership (compared to purely petrol power and assuming you make the most of the battery’s potential), which can very quickly add up to substantial savings. Putting this aside, the Panamera 4 E-Hybrid Platinum Edition represents one of the best iterations of the Panamera line-up to date, with aesthetic upgrades giving the host ‘more door’ an enhanced sense of class and quality. And let’s not forget, the Panamera is a much more engaging car to drive than many other German luxury saloons. The Taycan, meanwhile, is an altogether different proposition — the potential hurdles some drivers may see with adoption of a fully electric powertrain, especially those drivers frequently covering longer distances, can be overcome by the Panamera. Proof there’s plenty of life left in this Porsche yet.

Above Acid green accents indicate you’re in the presence of a plug-in hybrid, though the colour can be deleted as a nocost option.

Above It’ll cost you an extra £8,140, but the Platinum Edition rewards with plenty of dark, moody trim and lashings of upgraded comfort equipment.

Above The zero to 62mph sprint is completed in just 4.2 seconds — an impressive figure for a Porsche carrying so much weight.