‘This is a very important car for DrivesToday readers/chirruped the chap from JLR when issuing the invitation to the first launch drives of the new, fifth-generation Range Rover. Only the fifth? Yup, pretty incredible when you consider that it has now been in production for well over 50 years. Even more amazing when you think that many people might consider at least a couple of those previous generations superfluous. Is this one, too? We will soon find out...

When roads are optional

Spurred on by the suggestion that it is our duty to report on it for you, I waded through our last reader survey and quickly ascertained that, yes, the Range Rover is a very important vehicle for DrivesToday readers, a huge number of you owning or aspiring to them. It is a shame, therefore, that we didn’t drill down a little more and ask exactly what you use your Range Rovers for and what you expect from them because never have the choices been more diverse, or the contrasts in their purposes more sharp. 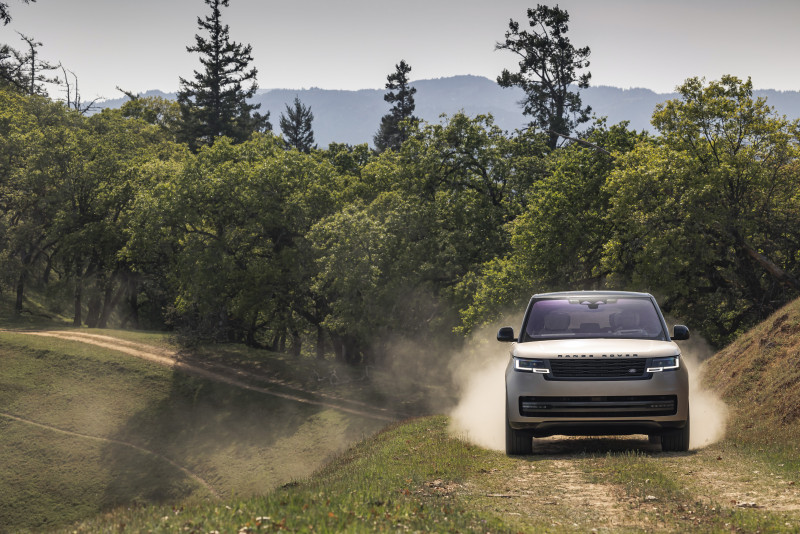 Here are the things they have in common: they are all bigger than their predecessors, with wheelbases of2997mm or 3197mm, though it is the 2209mm width that will be the main concern for urban users. They all use a new MLA Flex ally and steel platform, offering massively improved torsional rigidity, and seating options range from chauffeuring two in the back (in total luxury) with the bodyguard riding shotgun, to getting your seven-member netball team to its fixture. They all use the same eight-speed ZF transmission ZF 8HP and ride on air springs that can be raised and lowered, there’s traction and stability control, low-range and other drive options, and everything else you would expect from a £100-180k Range Rover.

The big deal is the active all-wheel steering, which helps give it a turning circle so tight (under 11.5m) that it will actually shock you. Though not as much as its slipperiness will. Remember when the world’s collective jaws dropped over the Audi 100’s Cd of 0.30? Well this is the same. That is simply mindblowing for a design that is less two-box than one brick and one breezeblock.

Talking of styling, it seems as if the waist gets ever higher and the roof ever lower, like a scaled-up Evoque, with flanks more like the escarpments you might expect it to scale. And rest assured that it remains astonishingly capable off road, yet that seems an ever more incidental part of its genetic make-up. Far more conspicuous is its refinement as a luxury car and you can’t fault the comfort and appointment inside.

More importantly for someone (ie, me) constantly frustrated by many integral elements of modem car design such as huge airdam wing mirrors, massive A-pillars, stupidly low-profile tyres that ride like a cricket pitch roller et al, I was especially pleased to see that

significant efforts had been made to slim that A-pillar down and eradicate the blind spots. It is now almost triangular, with the lean edge forming the pillar. Clever.

But which one is best? Stand-outs for me were the tamest and the craziest and, largely thanks to a slightly odd tendency for the LWBs to pitch and roll, both the SWB versions I tried.

The BMW 4.4-litre V8-powered 530, of course, is wonderful and bonkers and if your intended use is largely finding long, straight stretches of road and doing standing starts, or imperiously pummelling the motorways armed with a fuel card from your employer, then this is the one for you. How could you not adore something that propels tonnes from rest to 60mph in 4.4sec?

However, there is just too much pitch and wallow to enjoy it to the full on twisty roads, even with all sorts of engineering trickery. You can challenge the laws of physics but you can’t beat them, and the weight, rollpoint and everything else conspire against giving the behemoth the handling to match its power. The driver will be fine, but passengers may not want to eat for a while.

The truth, and for me the most unexpected result since Sunderland beat Leeds in the 1973 FA Cup final, was that my (yes, Mr high-octane fuel and never had anything otherwise himself) choice for everyday,

‘Even with all sorts of engineering trickery, you can challenge the laws of physics but you can’t beat them’normal human being use would be the diesel. It is just the best- balanced to drive, the engine and vehicle gel perfectly, and it is by far the most versatile and usable package. Plus, it will still get to 62mph in under 6.0 sec. And on that bombshell...

‘Even with all sorts of engineering trickery, you can challenge the laws of physics but you can’t beat them’

Facing page, above and below You’d expect nothing other than conceptcar I“oks and the ever-more-luxe interior, but Range Rover now seats seven and offers a greater choice of drivetrains