This supercharged 993 RSR tribute draws upon US tuning culture to create a truly unique 911. 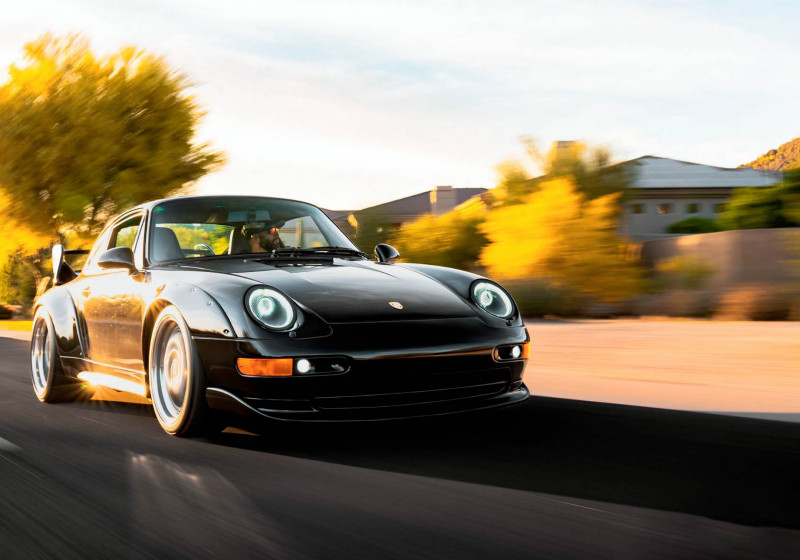 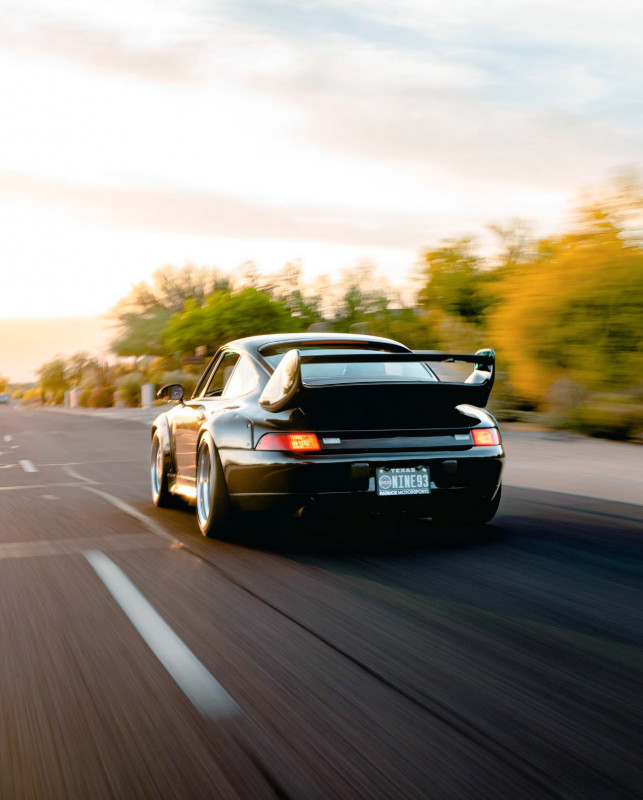 Scottsdale, Arizona is the unlikely epicentre of America’s car culture. For 50 years it’s hosted the weeklong Barrett-Jackson Auto Show, which regularly sees around 1,700 classic cars up for auction. The city’s many Cars & Coffee meets also spill over with tyre-smokin’ US muscle and brand new supercars, yet Gregor Mina’s 26-year-old 911 still turns hundreds of heads. Indeed, with a supercharged engine built by Scottsdale’s own Patrick Motorsports, this tribute to a 993 RSR is something of a local hero. Gregor has made Arizona his home, but his accent swiftly betrays that he isn’t so local. The 44-year-old marketing consultant hails from Edinburgh, Scotland, and most of his memories of growing up there involve cars. “My dad always bought What Car? magazine and I would memorise all the facts and figures in the back, then talk about them incessantly,” he says with a smile. 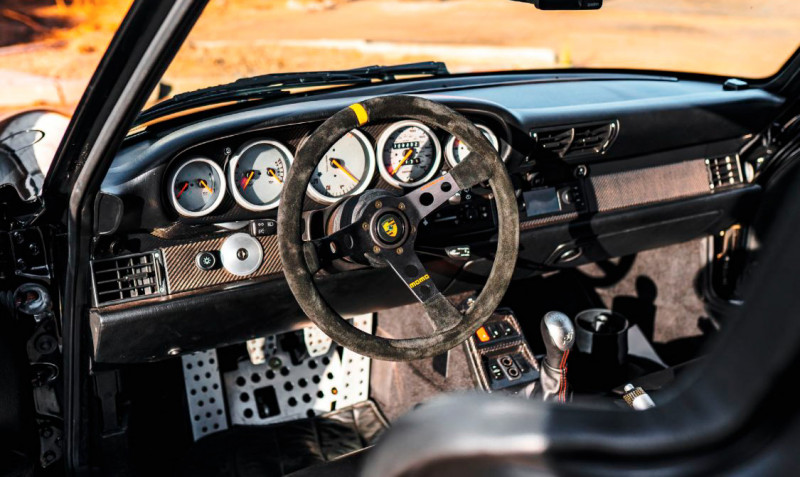 Years later, it was Gregor’s dad who ignited his passion for Porsche after buying a first-generation (986) Boxster. “I think those cars are perennially underappreciated,” he opines. “I can still remember driving that Boxster. Its handling felt so precise, with superb steering feel – and great build quality, too.” This Damascene moment would prompt Gregor to buy his first 911, but not before he’d sampled almost everything else…

Yes, Gregor (@thewidowmaker77 on Instagram) has one of the most eclectic car histories of anyone we’ve met. His first car was a Volkswagen Golf Mk2, followed by Mk1 and Mk2 versions of the Golf GTI. He then worked his way through a Lotus Elise and Exige, Alfa Romeo Brera and 145 Ti, Audi TT and Volvo V70 R. After moving to the US, he embraced the homegrown culture with a string of fast SUVs and muscle cars, including a Mercedes-AMG GL63 and a Dodge Challenger R/T Scat Pack. Now, with the 993, Gregor has finally found a car he plans to keep forever. 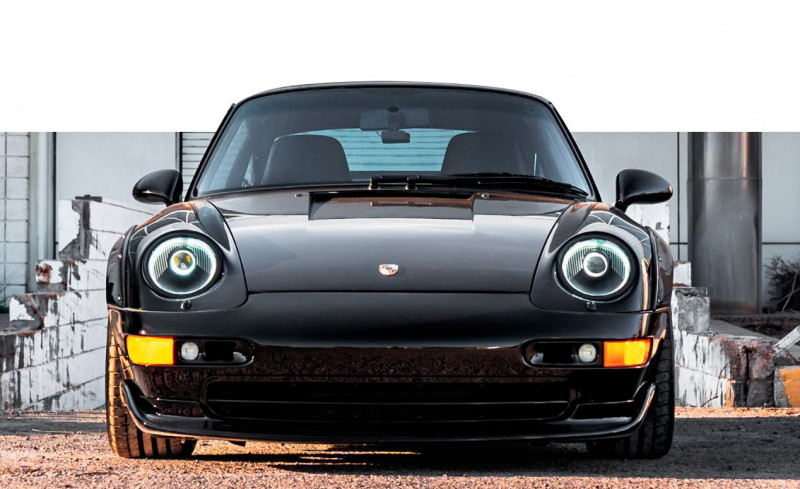 Back to Porsche, then, and that first 911. It was a 997 Carrera and it wasn’t exactly love at first drive. “I liked it, but I prefer cars that look and feel a bit different,” explains Gregor. He briefly weighed up buying a 991, then decided his next Porsche would be air-cooled – and likely modified, too.

After spotting the 993 on US auction website Bring A Trailer, Gregor was determined not to be outbid. Finished in factory Basalt black, the car had been upgraded by the (now-defunct) RUF Auto Centre in Dallas, Texas, and had “pretty much every RUF option ticked”. These included 19-inch alloy wheels, bigger brakes, lowered suspension and various interior upgrades, along with a Porsche 993 RS Clubsport Aerokit. The original 272hp Carrera engine, though, was essentially untouched. “It was a bit of a sheep in wolf ’s clothing,” Gregor admits. 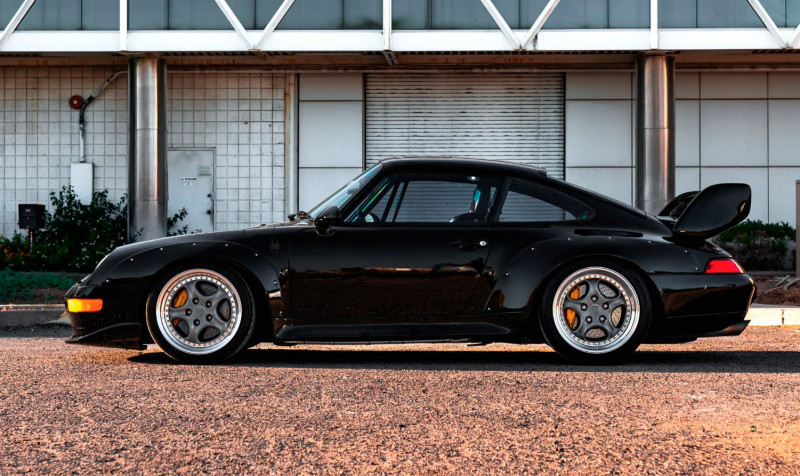 However, the plot thickened after the car arrived at Patrick Motorsports, an air-cooled Porsche specialist that offers its own range of backdated 911s and developed the first prototype car for Singer. When the flat six was opened and examined, it became clear that RUF had undertaken some tuning work, likely a turbo conversion, before returning the motor to natural aspiration.

Gregor can’t be sure, but he suspects that the 993 may have been modified to RUF BTR2 spec, retaining its 3.6-litre capacity and rear-wheel drive, but with a single turbocharger running 11.6psi of boost for peak output of 420hp (more than the twin-turbo, four-wheel-drive 993 Turbo). There’s evidence to suggest that the car lived on an airforce base and was gifted by a father to his son, so it may have been detuned for insurance reasons. If you know, let us know!

Whatever its past, the 993 was destined to become a ‘wolf ’ once more, albeit via a different route to Turbo-bothering power and pace. Its engine was totally rebuilt and enlarged to 3.8 litres by Patrick Motorsports, with a reinforced cylinder head, RSR camshaft, Mahle pistons, Pauter-forged connecting rods, a blueprinted oil pump and a Fabspeed Supercup stainless steel exhaust. Last but not least, it also gained a supercharger.

“Supercharging isn’t common in the Porsche world and I would probably have saved a lot of money and time if I’d just had the car turbocharged,” says Gregor. “I wanted to do this partly because it’s different, but also because I think superchargers, with their low-down torque, are better suited to road cars. It’s very linear and smooth, and the combination of flat six rumble and supercharger whine is just so evocative. It sounds unlike anything else.”

The 993’s custom-made Magnum Powers MPX90 is a Roots-type single-screw supercharger. The design is based on the Eaton M90 – a common OEM fitment to new cars – and uses the same mounting points. Cleverly, though, its much larger intake flange can push through twice as much air, for boost pressures of up to 20psi. Here, the system runs 9-10psi for the sake of reliability: good for 400hp at the wheels, in addition to a brawny 532Nm of torque – with most of that available from just 3,000rpm.

A typical summer day in Arizona can reach 40«C, so heat soak is a major issue for performance engines. To keep cool, the 993 uses a top-mounted air-to-water intercooler, partially fed by the scoops in the rear wing. This is supplemented by an ‘interchiller’, developed by Dyno-Comp (another Scottsdale tuning shop), which uses freon gas from the air conditioning to super-chill coolant that circulates the intercooler. “Technically speaking, this is a water-cooled, air-cooled Porsche,” jokes Gregor.

Putting all that power to the asphalt is a Wavetrac limited-slip differential, along with a six-speed manual gearbox, rebuilt using Porsche parts. “Again, we did the opposite of what most people do and went for longer ratios,” explains Gregor. “The engine has so much low-down torque from the 3.8-litre conversion and the supercharger that we really wanted to take advantage of.” The 993’s first three gears are custom and, as Gregor later discovered, almost identical to those of the 997 GT2 – “another big-horsepower 911 with rear-wheel drive.”

There’s a further 997 connection with the clutch and flywheel setup, which comes from the limited-run GT3 RS 4.0. This was designed for a hydraulic clutch, so this car uses a larger slave cylinder, sourced from MPL in Germany, to provide extra assistance. Time your shifts right and it’ll hit 62mph in 4.0 seconds, then reach a top speed of 175mph. Such additional performance demanded more stopping power, as Gregor explains: “We fitted 993 Carrera RS brakes, with 322mm front discs and six-piston calipers. Many people upgrade to the ‘Big Reds’ from a 993 Turbo, but the brake bias isn’t as well suited to a rear-driven car.”

Suspension is by KW V3 coilovers, wound down to their third-softest setting (number eight of 10) and replacing the stiffer Bilstein setup previously fitted. Despite riding “as low as a Cup car” Gregor says the ride is very compliant: “It doesn’t bump or bang, yet you still have fine control and minimal body-roll.” Nonetheless, a HYBRID-air front-axle lift system is all but essential. Available for the 993 and 964, it fits within the spare wheel and uses air cups in the front springs to lift the car by 50mm at any speed.

When it comes to aesthetics, Gregor cites the excess-all-areas creations of Rauh-Welt Begriff (RWB) as an influence. His biggest inspiration, though, came from California’s Guntherwerks. “If Porsche had continued developing the 993, those cars represent how it would look today. That’s been my ethos with this project – it excites me far more than a backdate.” Along with its towering 993 RS Clubsport spoiler, perhaps this car’s most distinctive feature are its muscular RSR wheel arches. Gregor says these often see it mistaken for a GT2, but – much like the rear wing – they’re designed specifically for a narrow-body 993. Fitting them involved Patrick Motorsports sawing off the original wings, then bolting on the new parts using factory-supplied gaskets. Not a job for the faint-hearted…

Filling out the haunches are a set of original (and ferociously expensive) 18-inch Speedline RS alloys shod with Michelin Pilot Sport 2 rubber. The rims have been custom-widened – to 9.5 inches at the front and 11.5 inches at the rear – to ensure there’s no need for spacers. “For me, getting the wheels right was so important, both for setting the car’s stance and achieving an ‘OEM+’ look,” says Gregor. Mission accomplished, we reckon.

The 993 also has restomod-style LED headlights from Flat6 Illumination, with a halo-shaped outer DRL (daytime running light) that glows orange when the indicator is flashing. Gregor rates them as a massive improvement: “They emit a really crisp, white light – the original lamps feel like candles in comparison.” Other neat touches include a typically RUF painted rear reflector, RUF badges and Gregor’s unique Widowmaker spider logo on the front flanks. Inside, there are silver dials, carbon-fibre trim, a PCCM head unit, a pair of ultra-rare Recaro R8 seats (retrimmed in black leather) and more RUF touches, including the sill covers and gear knob. The rear seats have been retained, much to the delight of Gregor’s two young boys, but the RUF steering wheel has been swapped for a dished Momo MOD.07, as used by Porsche Motorsport on 993 Cup racers. “It’s one of my favourite modifications that I’ve made to the car,” confesses Gregor. “The smaller diameter makes the steering feel a little sharper, and the suede rim is thinner. The level of feedback is almost sensory overload.”

As you’ve probably guessed, the 911 is certainly no pampered show queen. Scottsdale has the desert on its doorstep, and fantastic canyon roads – including the Grand Canyon and Sedona – are within relatively easy reach. Gregor is part of a Phoenix-based supercar group called PHX-Driven, and he often joins fast-moving convoys with Ferraris, Lamborghinis, McLarens and newer Rennsport 911s.

What the 911 lacks in ultimate power – at least versus a modern supercar – it makes up for in driving drama. “You’ve got a lot of weight at the back and wide rear tyres, but when the car does let go it’s progressive,” we’re told. “The Wavetrac diff gives it a mechanical feeling, with no electronic interference.” Gregor also says it’ll keep pace with his friend’s 991.2 GT3 RS until the upper reaches of third gear…

When we spoke, Gregor was just a week away from finally moving back to Scotland, but his amazing 993 will be coming with him. After eight weeks in a container, it’ll arrive at Southampton docks, then head due north. With an Audi RS6 as his daily driver and family holdall, Gregor’s plan is to use it for road trips and European driving holidays, where left-hand drive will actually be an advantage. First stop, the Nurburgring, we wondered?

Looking ahead, Gregor rather fancies a 996 GT2 – another Porsche worthy of his Widowmaker logo, but you sense his compulsive car-buying days may be over. “For the money I’ve spent on this project, I could have bought a new GT3 RS. But no matter how special those cars are, somebody else will always own a similar one. I wanted something unique and this is my perfect car.”