This 850Ci is a former star of TV’s Top Gear, once raced by Richard Hammond, since rescued and reborn following an eight-year lay-up thanks to a dedicated BBC crew member.

“It’s very slow, it doesn’t look very nice, it isn’t very spacious, and it comes with less equipment than a cave.” That was Jeremy Clarkson’s typically acerbic crucifixion of the abysmal Nissan Pixo back in the summer of 2011; at the time it was, at £6,995, Britain’s cheapest new car, and you really did get what you paid for. This may seem like a peculiar thing to bring up in a magazine that’s so keenly fixated on German cars with propellors on their noses. 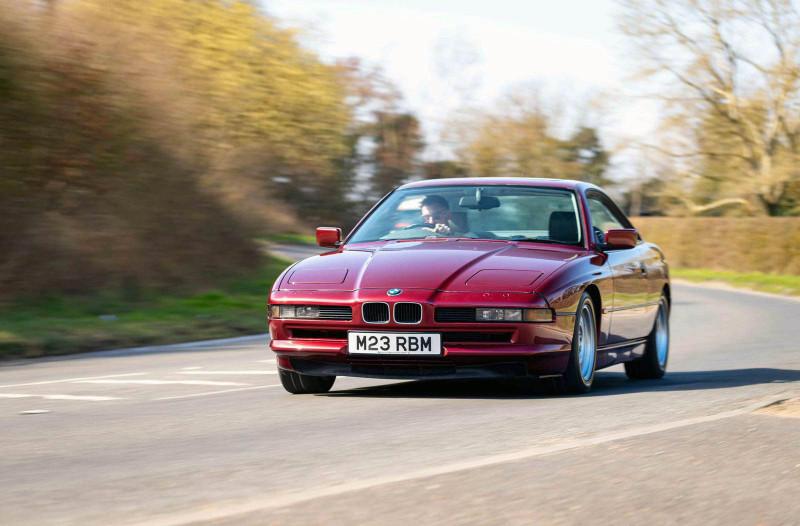 “Hammond thinks it’s hilarious that I own it, but he remembers what a nice car it was” 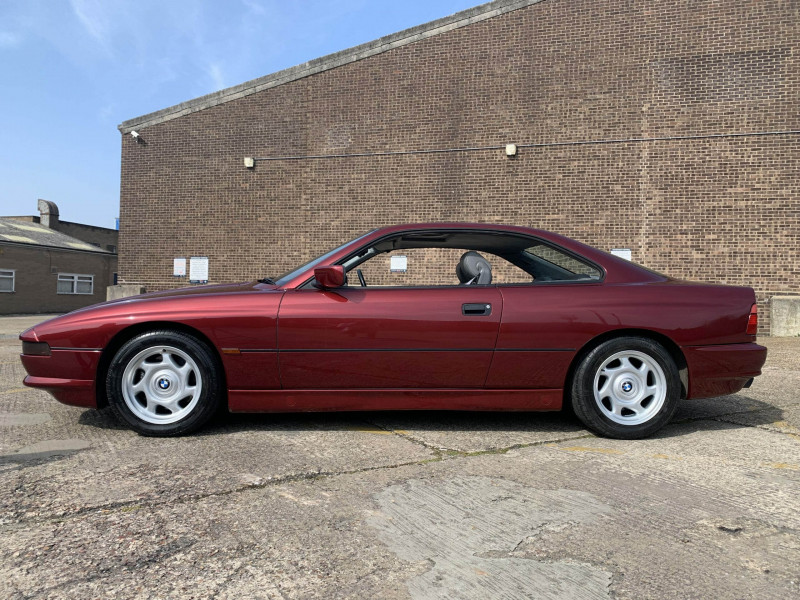 But it does make sense. You see, season 17 of Top Gear was on the air in 2011, and Episode Three featured a challenge that was particularly relevant to our interests: Jeremy drove the box-fresh Pixo, concluded that it was essentially the automotive equivalent of a listless shrug, and hit upon a plan: he and Richard Hammond would take that £6,995, comb through the classifieds, and buy something altogether more satisfying. The results of this search? Clarkson bought a Mercedes-Benz CL500 C215, while Hammond paid £6,700 for a BMW 850Ci with 54,000-miles on the clock. And not just any 850Ci E24, but the very one you see here before you. So what has happened between that point and this one, and has the retro V12 cruiser been surfing on a wave of relentless success for the 11-years since?

To answer that question, we need to tiptoe around to a hidden corner of Dunsfold, where a diverse and unsettling vista of old Top Gear projects find themselves casually going about the business of returning themselves to the elements from whence they came. The 635 CSi E24 ‘art car’, one of their homespun ambulances, the battered Fiat Barchetta that had such a hard time in the sand, the old Lanchester that wasn’t built by Hammond’s grandad… and the 850Ci, looking all green and mossy. Into this seemingly hopeless scene strides the hero of the hour: Dave Morgan, the chap responsible for rescuing our forlorn BMW and restoring it to the glorious state in which it luxuriates today.

“I’m used to tinkering with cars, but I admitted to myself that the 8 is not that kind of car...” 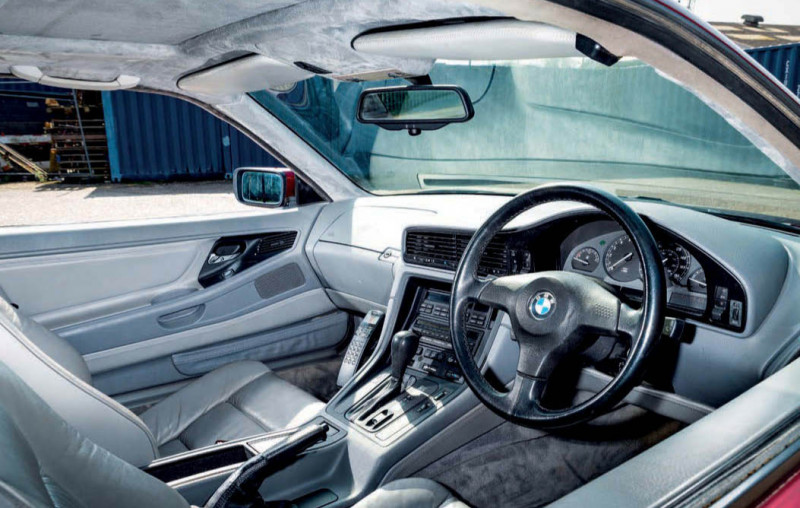 So who is Dave, and how did this happen? Well, today he’s a Senior Producer on The Grand Tour, but his relationship with this BMW began back when he was on the Top Gear production team. “I actually joined Top Gear a couple of years after the episode aired, and I would covet the car every time I saw it languishing in the corner of the yard,” he recalls. “It was parked next to Jeremy’s ‘art car’, covered in moss; occasionally I would go and sit in it, marvelling at what good condition it was in. Over the course of five years working on the team I constantly tried to buy it from the BBC, but as it had an undiagnosed engine condition I was reluctant to pay the fee they wanted. Anyway, just before I left Top Gear for their mortal enemies The Grand Tour, I made them an offer and it was finally mine.”

As well as making an exceptional choice within the given budget back in 2011, Richard Hammond had also picked a particularly interesting example: this 850Ci is powered by the earlier 5.0-litre V12, and is in fact the fifth-to-last chassis to use this engine before BMW swapped it out in the spec list for the new 5.4-litre M73 engine. Its exploits on screen comprised Clarkson making fun of the ruched leather and small wheels, a rolling road run that showed the M70 to be putting out 269hp, an unsuccessful drag race against the far more powerful Mercedes (no shock there), and a general agreement that pop-up lights are an excellent thing. And after that? Into the yard it went; apparently unmodified cars used on the show were generally sold on to friends of the production team, but the 850Ci was so nice that they hung onto it. Two of the producers used it as their daily drivers for a couple of years (one of them even managed to move house with it), but then it developed an engine fault and would only fire on six-cylinders, so it was laid up at Dunsfold with its future uncertain.

At this stage of the tale, Dave might have seemed like an unlikely saviour. “I’ve never been a BMW man,” he admits. “I’ve owned nearly 50 cars, but they have mostly been a mix of old Volkswagens, Porsches and crusty motorhomes. This 850Ci, however, is a cut above. I didn’t expect to love driving it as much as I do. It’s like driving a train, effortless power and so smoothly delivered. It doesn’t sound sporty like the V8, it’s much more understated, which I like. And it drives like a new car, everything feels so tight.” Indeed, the car has only covered 61,000-miles to this day, and it’s 100 percent factory-standard. Although it wasn’t simply a case of hauling it out of the yard, jet-washing the slime off and whacking the V12 with a spanner to get those other six-cylinders popping. No, it’s been a little bit more involved than that… “I wanted to collect it myself,” says Dave, “so I hired a Ford Transit beavertail. I hoped that two new batteries would give it enough juice to drive onto the trailer, but the engine just turned and refused to fire. Unfortunately I didn’t realise how heavy a BMW 8 Series is! At two tonnes, the Transit struggled to pull it up the ramp and it must have been hugely overloaded. The drive was extremely hairy, with corners attempted at very low speed to stop myself toppling over.”

Knuckle-whitening stuff, but our hero managed to hustle the barge home, and then he was able to assess just how much love the slumbering BMW would be demanding. “I’m used to tinkering with cars, but I admitted to myself that the 8 is not that kind of car,” he continues. “Plus I didn’t want to break it. So I took it to 8 Series specialist Chris Burton in Surrey, who fortuitously happens to be about 20-miles from Dunsfold. The first thing Chris did was to offer to buy the car! Seeing such a low-mileage example is a rare thing. He replaced both fuel pumps and did a full service on it, including replacing the radiator which had a hairline crack in the reservoir. It ran beautifully and sailed through its first MoT for 10-years. I couldn’t wait to get it on the road, and since then I have been slowly restoring bits and bobs. Chris got the sunroof working and replaced the entire headliner at the same time, and I’ve also had the on-board computer and original Bavaria stereo restored.”

Dave’s methodology here has been one of completeness and correctness, stalking through the car with a ruthless eye to eliminate any issues and get everything working as it would have done from the factory. He’d originally been planning to fit the larger 17-inch ‘throwing star’ alloys, although the fact that it’s wearing its original and modest sixteens has wormed its way into his affections. “Clarkson called them ‘sofa castor wheels’,” he laughs. “I had them professionally restored with brand new centre caps, and I think they give it a beefy muscle car look. Plus it’s original, and I’ve become a bit of a stickler for originality.”

It’s all in the details with this car. You’ll note in the photos that the curly-wire carphone is present; this had been removed at some point, but Dave still has it and it was reinstated for the shoot. And you’ll be pleased to note that it’s all been scrubbed up a bit in there too: in the episode, the car was taken to a lab to analyse the state of the interior, whereupon it was discovered to have ‘no faeces, but plenty of saliva, a lot of material that looked like rolled nasal mucus, and a general pervading aroma of urine’. Don’t worry, Dave had his gloves on, and the original factory interior is a true period survivor. And given how pampered and beloved a life it’s living these days, you can be sure that it’s still got Hammond’s approval after all these years. “I’ve been working at The Grand Tour for over a year now and I’ve driven it into the office once; Hammond thinks it’s hilarious that I own it, but he remembers what a nice car it was,” says Dave.

“I haven’t quite plucked up the courage to get a picture of him with it yet…” What might perhaps be even more of a coup would be to get a photo of it with James May behind the wheel. Captain Slow closed Episode Three of Season 17 by asking the other presenters: “Have you two taken complete leave of your senses? Anybody who buys an ancient V12 coupé instead of the economical 3-cylinder little hatchback is going to end up bankrupt and living in a skip.” Well, as far as we’re aware, Dave isn’t living in a skip yet – and if that does turn out to be the case, at least he’ll have a very tidy 8 Series to hide from the rain in.

Back in 2011, when this particular episode of Top Gear hit the airwaves, the challenge for Richard Hammond and Jeremy Clarkson was clear: they’d take the value of the UK’s cheapest car at the time, the Nissan Pixo, and instead buy something more interesting. It’s fair to say that Hammond’s 850Ci (and Clarkson’s Merc) achieved that with gusto. But after 11- years, what’s become of the humble Pixo? Well, according to official figures there’s still over 12,000 of them on the roads in the UK – and, according to a quick straw poll around the office, not a single one of them contains a person who’s happy with their life choices. 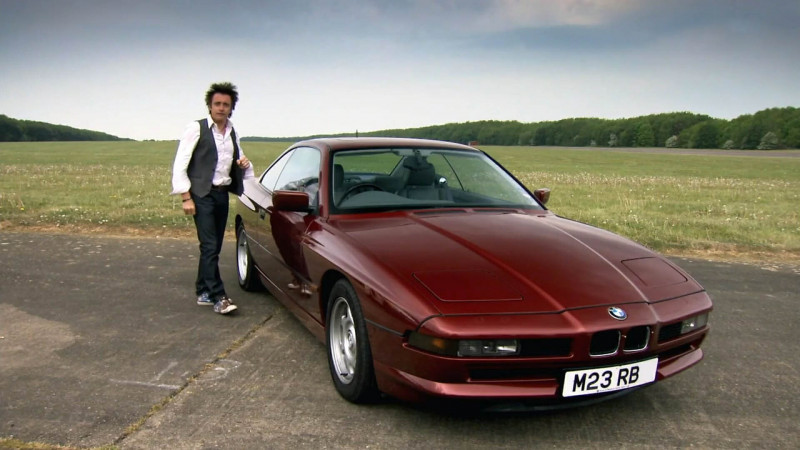 Nowadays you can buy a Pixo for as little as £1,000. But for goodness’ sake, please don’t!

BBC TV's Top Gear became ingrained in car culture decades ago, but it did something more than that. In its original form, with Clarkson, Hammond and May, it managed to go further than any «car show» had before – making cars mainstream. The programme became popular light entertainment for people who didn't care about cars, regardless of what you think of the show that's no mean feat. Now, as you undoubtedly know, the trio's antics over the years were peppered with controversy but even with that fact, for car enthusiasts, often it was their three-way car buying adventures that stuck in the mind – even if they ended in destruction. This month's cover car is a former star of one of those episodes – a survivor. The E31 850Ci was purchased for the show and raced by Richard Hammond against Jeremy Clarkson and James May in 2011. I won't spoil the feature for you but suffice to say the car hung around afterwards until a member of the production crew saved it following an eight-year lay-up. Read the full story. 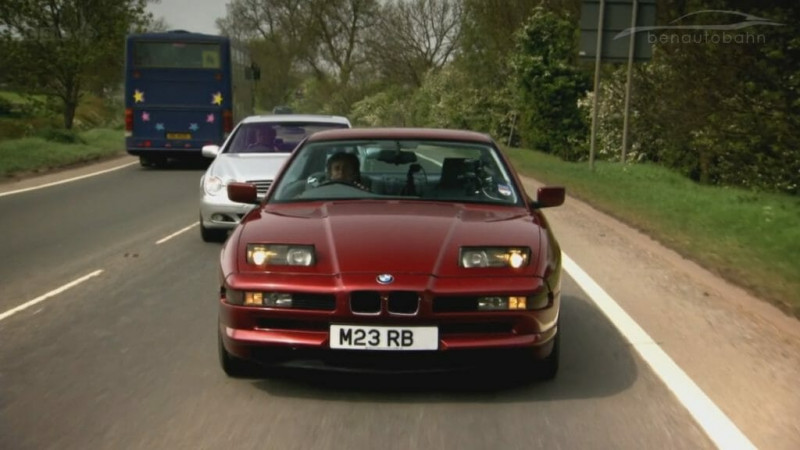 I really enjoyed your feature on the ex-Top Gear 8 Series, I remember the episode that the car appeared in vividly, in fact it switched me on to the wonders of the 8 Series and a few years later I bought one for myself! That car has long since been sold to a new owner but I’m sure I wouldn’t have owned it if it weren’t for that episode of the show. It is great to see that the car lives on today.