Is an M4 a sensible family car? Well, yes and no. Mostly no, if you put a roll-cage in it. But for Jörg Stulken, this familial bond runs a little deeper.

“When you do things right, people won’t be sure you’ve done anything at all.” So said the universe itself in a particularly insightful episode of Futurama. Subtlety, you see, is so often the key to satisfaction – people like it when things just work and work well; you don’t have to be radical to spread joy. It’s basically the opposite approach to what Donald Trump was up to – instead of steamrolling, shouting and bullishly forcing change, it’s far more elegant to whisper under the radar. And that’s the cornerstone of Jörg Stulken’s (@schnulli_ fitlifestyle) success. 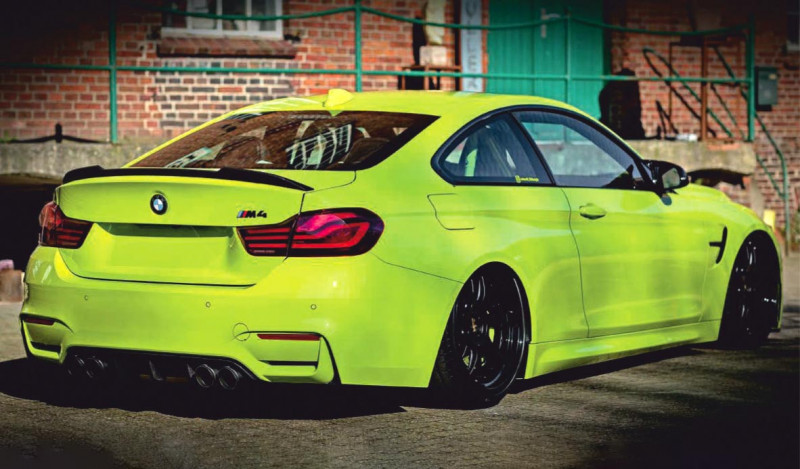 Jörg is, as you might have guessed, the owner of this vividly-hued M4, and he’s gone for a full-on OEM+ aesthetic here. OEM+ is a term that gets bandied around a lot these days, with people retrofitting numerous diverse interpretations into it, but the most fitting here is simply this: it’s the sort of car that BMW could have made. It didn’t, but it could have.

I did initially tell my wife that I’d only be modifying a few things. But as you can see, I ended up going a bit crazy with it”

It helps enormously that BMW itself did a pretty sterling job of crafting this car as a unique entity in the first place. There’s always a fun bit of customisability to be enjoyed when you’re ticking boxes on the options list, but this M4 went a step further. It’s the only one to have been supplied new in this particular Individual colour, and it’s also got the Individual interior with its ‘Born in M Town’ motif. So it’s a pretty special BMW to start with. But it was precisely that – a starting point – for Jörg; this, you see, is a man with a certain amount of history when it comes to skilfully upgrading automobiles. 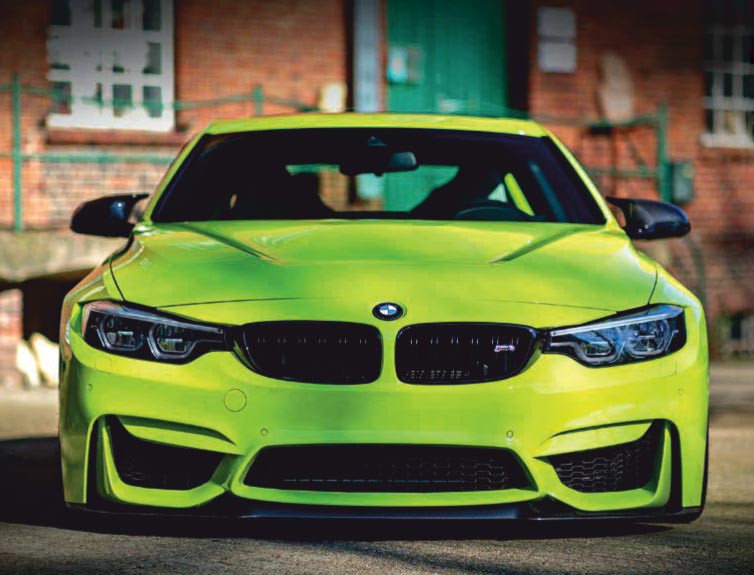 “My wife and I bought an E30 First Edition in Macau blue, which we quickly decided to start modifying,” he explains. “We fitted BBS wheels and Air Lift suspension… but then we had a little boy, and decided to get something more family-friendly – I managed to sell the idea of an M4 as a more practical choice,” he grins.

They do also have a few other options, however, as Jörg had previously put together a rather tasty Audi RS4, something he now describes as one of the family. “It’s a Nogaro Blue B5 with BBS three-piece wheels, KW Variant 3 suspension, carbon roll-cage, Recaro Pole Positions, and 630hp – I’ll never sell it,” he says. Fair enough… but why an M4, then?

“I’ve modified a lot of cars, starting with my first car, a VW Polo G40,” he explains. “After that, I had a Mk2 Golf GTI, followed by a variety of custom bikes before coming back to cars. I bought a Porsche 911 997 convertible which I customised with three-piece wheels, KW coilovers, Turbo seats, and various carbon bits. It was after I sold the Porsche that I started modifying the RS4 – and then I fancied another toy in the garage, which is how the M4 came about. I found this one with a BMW dealer on mobile.de; it had been advertised for a few days but with no pictures. So I called the dealer and asked to see some photos, and as soon as I saw the colour I told him I’d be there first thing in the morning!”

Jörg had an over-arching plan for the car from the off, and that was that it should be something unique. Of course, as we’ve outlined, it was already thus thanks to its unusual specification, but that wasn’t what he meant; no, Jörg wanted to put his own stamp on the car in line with the assorted high-end projects he’d put together before.

Split-rims, low-slung stance, a timeless formula – he just had to make some decisions and start piecing it all together. Naturally, he had to keep in mind that this was to remain a sensible family car though, right? That was, after all, the foundation of the idea in the first place. “I did initially tell my wife that I’d only be modifying a few things,” he grins. “But as you can see, I ended up going a bit crazy with it. One day she asked me, ‘You can remove the crossbar of the roll-cage, right, so we can all drive together?’ Er, no… turns out it’s not so much of a family car after all.”

That’s just the way the cookie crumbles sometimes – and, hey, there’s plenty of room in the Audi for that. No, Jörg was adamant that the M4 receive a colourcoded Wiechers Clubsport cage, as the cabin was nigh-on perfect, and this made the ideal finishing touch. And outside? It needed some appropriately road-racerish accoutrements to match. 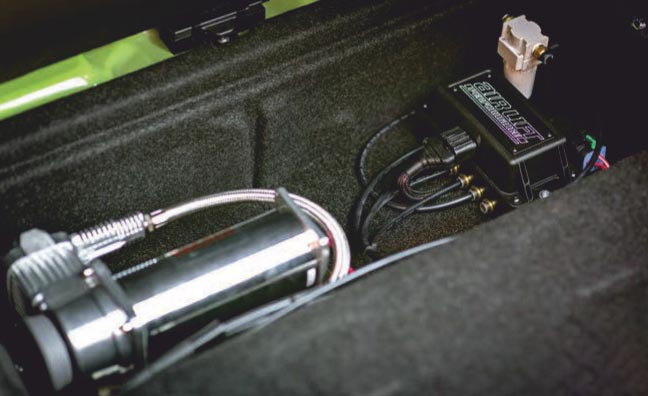 “I only buy BBS three-piece wheels because they have the best timeless design and the best quality,” he continues. It’s a strong choice, these LM-R splits suit the M4 beautifully, and he’s opted for some pretty aggressive specs – 9.5x20” up front and a full-fat 11x20” out back. They’re tucked neatly inside the arches thanks to an Air Lift Performance suspension setup, complete with 3H management and height sensors, the hardware subtly squirrelled away inside the boot. And there are a plethora of CS-spec bodily upgrades to help sharpen up the profile and shrink down the kerb weight, with the bonnet, front air dam, rear spoiler and diffuser all being crafted from carbon fibre.

There have been power games at play too. In factory-standard guise, the launchspec M4 was rated at 431hp, and that would be a pretty spicy meatball for most people to swallow. But Jörg is not most people. He’s had the engine remapped by DigiTec, along with fitting a supremely sophisticated Akrapovic Evolution exhaust system with carbon tailpipes, the upshot of which is a robust 580hp. Not to be sniffed at. And the transmission has been beefed up to suit, DigiTec reflashing the gearbox software to GTS spec for that all-important extra aggression. 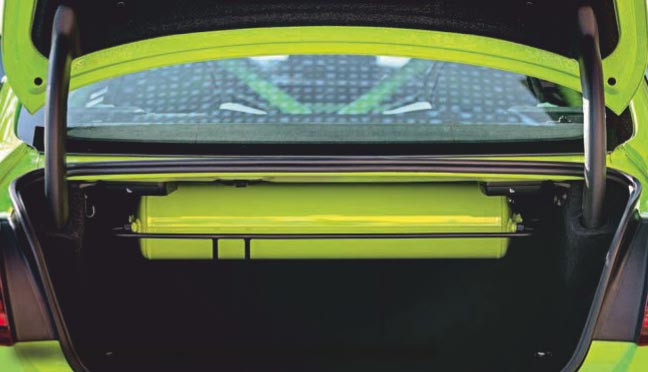 All in all, it seems a fairly spot-on addition to the family fleet. “The car is perfect now, there’s nothing more I need to do,” says Jörg. “My favourite part is the colour, and the fact that it’s the only F82 with this paint.” That certainly did make for a strong starting point, and what he’s achieved over and above that is truly impressive. And the family aren’t annoyed that he’s filled the back with roll-cage so they can’t all go out in it? “No, we have an X3 as a daily family car,” he assures us. “It’s all black with H&R suspension.” But of course. So all bases are covered, and the M4 is complete. A happy ending. Except, no, these things are never over.

That’s the crucial word that runs through this story like ‘Southend’ through a stick of rock: family. The fact of the matter, is that life is all about compromises; we have to balance our natural impulses to live in the moment with a slightly longer view because otherwise, we’d all die very young. To return to our opening Futurama motif, remember that episode when Bender the robot turns into a human and immediately eats, drinks and smokes himself to death? 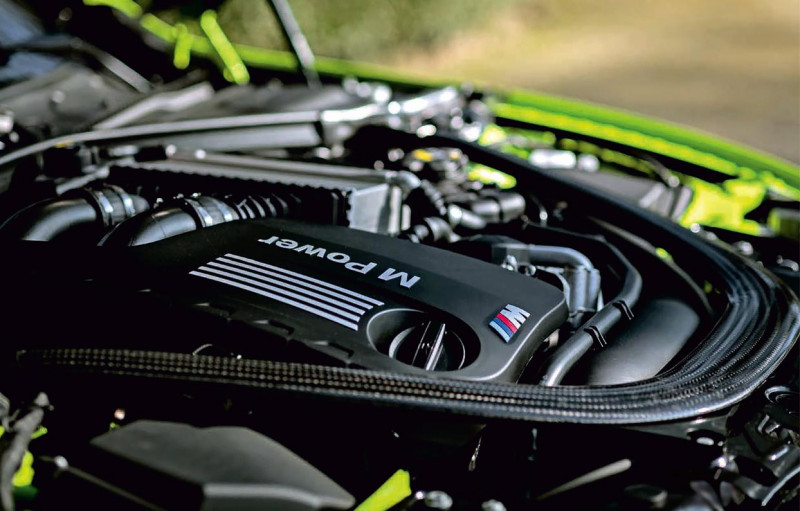 Moderation, that’s the key. So when your partner, spouse or significant other suggests that you need to get a sensible family car, something that’ll be practical for taking the kids to school and lugging garden waste to the tip, you’d better not turn up with a stripped-out race car and a Cheshire cat smile. You’ll suddenly find yourself living in the garden shed. But if there are options and alternatives, then it’s all systems go. With the car itself becoming part of Jörg’s family rather than merely acting as a means to convey them, it circumvented the need for sensibleness. It’s not subtle, sure – nothing this colour could be – but the modification approach is. Well-chosen upgrades to augment the aura, elegantly sliding under the radar.

Article type:
Review
bmw m4 f82bmw m4bmwbmw f82
—
106
Write a comment
No comments yet. Be the first to add a comment!