Born in 1969 to replace the ageing 1100 R, the Fiat 128 matured as it underwent a series of facelifts, not all of them flattering. These started with the 128 Special’s rectangular headlamps that were as chic as NHS 524 spectacles, ending up with a 1970s trip to the plastic surgeon. It was an indifferent look that lasted until the 128’s retirement in 1985. The 128’s legacy was not helped by the influx of the Communist-built Yugo Zastava 101.

Meanwhile, Britain’s early 128s faded away, their disappearing act so all-pervading that to glimpse this 1975 128 1300 RHD two-door is enough to stop you in your tracks. Regular readers may well recognise this particular car, if not quite like this. It has featured in Auto Italia both as Fiat intended – all skinny-tyred and rubbing-stripped metal bumpers – and as a Rally lookalike with gold alloys. On both occasions it wore a coat of Fiat red paint, which came with a strong whiff of brown. Today, this funky due porte is brown-free, thanks to its current owner, Owen Jones. 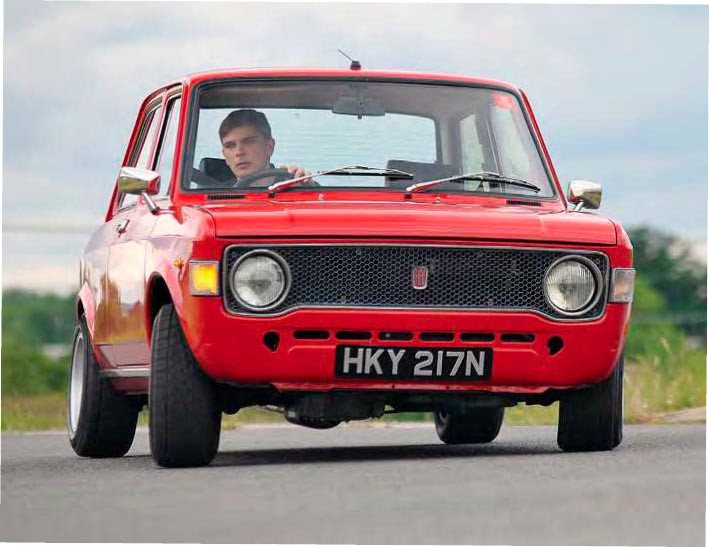 “I’ve had the car for four years,” says Owen. “It was a pretty standard Fiat 128 with slightly different wheels, suspension and bits ’n’ bobs but it really needed a bit of love and care. The two-door saloon is very rare because everybody just binned them, basically. In all honesty, all 128s are rare but a two-door right-hand-drive saloon is exceptionally rare.

“The last owner was Graham Franklin, a serial 128 collector who really cherished the car. Eventually, he decided to sell it. He knew we were in the market for a 128 and he offered it to me and dad, so we snapped it up.

“We stripped the car down, but left the engine and suspension on — for ease of manoeuvring — and then it was sent to Tony Castle-Miller at Middle Barton Garage. It was then fully dismantled right down to the shell and went off for an acid-dip.”

Didn’t the shell turn into bran flakes during this process? “Actually, for one of these, the body was very impressive. It just needed a new scuttle and luckily, it came with one. I don’t know but Michael Ward might have cut the scuttle out of one of his cars, at some point.” (In between taking photographs, Mr Ward grins.) “So the new scuttle was fitted and the whole body painted in Alfa Romeo red. It was then put back together with Koni suspension.”

In fact, I know all about Owen’s father Phil’s serial Fiat enthusiasm because I interviewed him about his Abarth 850TC Stradale in 2004. He pointed to the inspirational source being a 1964 copy of the Observer’s Book of Cars that featured an 850TC on its first page, complete with propped-up engine lid.

“When I was younger, we had a book on Filipinetti Fiats. Filipinetti raced 128s extensively in the mid-1970s and so that just got me really into it. They had bubble arches, 9-inch wide wheels and they were pushing out 150-160hp from a 1300 engine, so they were the absolute business!” says Owen, grinning. “I think they wiped the Abarth 1000 off the scene. Ever since I saw those, I thought they were the best-looking car.” 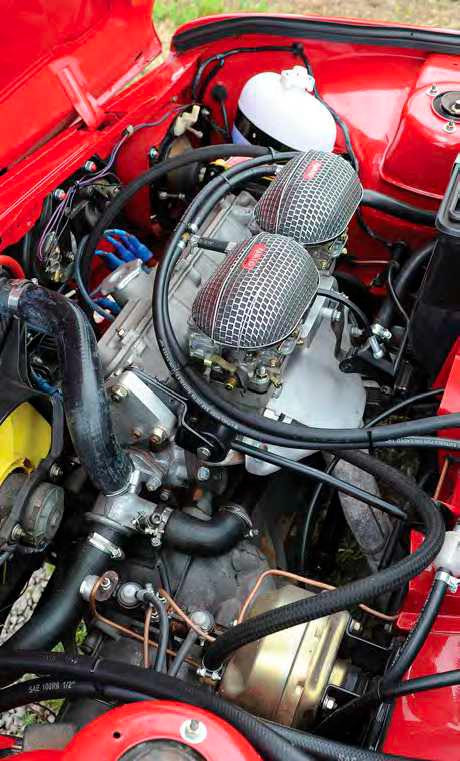 This 128 is far from style over substance. Its engine has enjoyed considerable work. Of course, the 128 benefits from the talents of Dante Giacosa and Aurelio Lampredi who engineered the belt-driven SOHC alloyheaded engine — but it is a unit which also gleefully responds to a tuner’s tickle.

The starting point was a 1301cc Lancia Delta unit, with a slightly higher compression ratio (up from 8.9:1 to 9.5:1), and with so few miles on it that it’s still loosening up. “It has had a lot of work,” says Owen. “Twin Weber 40DCNFs, a gas-flowed and ported head, high-lift cam, upgraded valve springs, a stainless-steel exhaust with two small silencers and an X1/9 sump — which is lower than a normal 128 one.

“It’s been on the engine dyno at 102hp at 7300rpm, which is quite impressive given that in standard tune the 128 1300 realised 60hp. Because the car weighs roughly 850kg — it’s missing bumpers and a few other things — it goes along quite nicely.”

The interior has also been sympathetically improved. The beige-and-brown, cloth-and-vinyl trim, which is an taste, has been replaced. “It’s had a full retrim with really nice Cobra cord bucket seats and matching door-cards, which we had specially made,” says Owen, “while supplementing the 128’s sparse dials is a pod-mounted tacho.”

It all invites you to hop in and fire it up. On the move, your first impression is the steering: so sweet, light and bubbling with a rich flow of news from the road. Even though this car is fitted with larger 7J x 13in replica Campagnolo alloys, it makes a mockery of power steering and doesn’t have issues with self-centring which can affect some early front-drivers. Twirling that chunky Abarth wheel, everything is instantly intuitive and unsullied — and not an ounce of familiarisation is required.

Yes, the pedals are slightly offset, the simple interior’s only flamboyance is a sliver of Formica on the dash and, fans of ‘refinement’ would undoubtedly complain — but for those with the Italian disorder, the single-cam symphony just makes you smile.

The four-speed gearbox’s ratios are well chosen, but the gearchange could be described as moody. It’s mostly light and co-operative, but on the third/fourth plane it can feel a little sticky, with fourth being a bit elusive and the synchros occasionally protesting when changing down into third. It’s one reason why Owen has plans to upgrade to a five-speed ’box.

“The five-speed gearbox is a bit of a must for motorway use, it’ll save you doing 4500rpm,” says Owen. “I’ve got a five-speed in the garage and I’m going to whip it apart because I don’t know what state it’s in. If needed, I will rebuild it but if not, I’ll just put it straight into the car.”

“I’d also like lower suspension on the front,” he adds. “When I have the time and the money, I’ll put adjustable platforms on the front and just drop it down a bit. I’d also like to add a switch to stop the fuel pump coming on when the ignition is on, because that’s a bit of a pain. Apart from that, it’s really where I want it to be.”

The sparky 1300 really does zing when it revs; and it more than keeps up with 2022 traffic, allowing you to chug deeply from an accomplished front-wheel drive chassis, which benefits from better front/rear weight distribution due to the spare wheel and battery being relocated to the boot. This 128 is quick-witted and entertaining — gone is the somewhat roly-poly, sliding cornering of an original, but given the power increase this is necessary. When a snaking section of Wiltshire fills the windscreen, you can almost hear the little Fiat smack its lips with delight. On unfamiliar roads, you certainly can’t detect any concerted body roll — just rapier-like direction changes, grip and tasty feedback. The 1300 will rev up to 7500rpm — which is incredible for a 1970s SOHC — but do keep an eye on the tacho.

One flirtation with 6000rpm is as high as road conditions and my conscience will allow, given the engine’s low mileage. In fact, it would be great to see how this car compares against an Alfa Romeo Alfasud 1.3 ti, because that’s how enjoyable it is.

The interior roominess is impressive — take it from someone whose build resembles an accidental bulk order — but aside from the space, the other benefit of the 128’s long wheelbase is a ride that’s only really caught out by the most neglected and battered bitumen. Its all-round independent suspension — MacPherson struts all around with a rear balestra transversale — really does, despite modifications, give the car an impressive ride/handling balance.

Often there’s a design drawback to a car with an elongated wheelbase and a Tardis-like interior — a risk of unhappy proportions and oddball styling — but the 128 deftly sidesteps this. It is a minimal masterpiece that has just the right amount of rake and drama to avoid it looking like a Tetris block. It provides a fine setting for some wonderfully executed details — that delicate honeycomb grille, charismatic round headlamps and slight, horizontal rear lights. The inclusion of wing-mounted Scuderia Filipinetti decals is also a nice and very personal touch.

Yes, this 128 certainly does leave a great impression, being a blend of pioneering engineering and well-sorted fundamentals. 128s should certainly have a larger following on these islands. Indeed, as more people see this eye-catching 128 out and about, it can only be a matter of time before this trail-blazing Fiat starts to attract the UK following it truly deserves.

As featured in Auto Italia before, this 128 used to have brown-red paint and then gold alloy wheels. Engine has been dyno’d at a sprightly 102hp. Chunky Abarth wheel and bucket seats feel just right. Bare shell restoration has resulted in a fine-looking, fine-driving example of the rare two-door 128 saloon

Your first impression is the steering: sweet, light and bubbling with a flow of news from the road

Article type:
Review
fiat 128 restomodfiat 128fiat
—
135
Write a comment
No comments yet. Be the first to add a comment!