The Fiat 124 range was the brainchild of Dante Giacosa, the brilliant chief designer at Fiat during the 1950s and 1960s. He could never have known just how successful the saloon version was going to be.

From its launch at the Geneva Show in March 1966 it was destined to become the world’s highest-selling automobile to be produced without a major design change. Total Italian production of the 124 series saloons was approximately 1,543,000 cars. However, in Russia and the former Soviet Union around 20 million cars based on the Fiat were produced between 1970 and 2012. 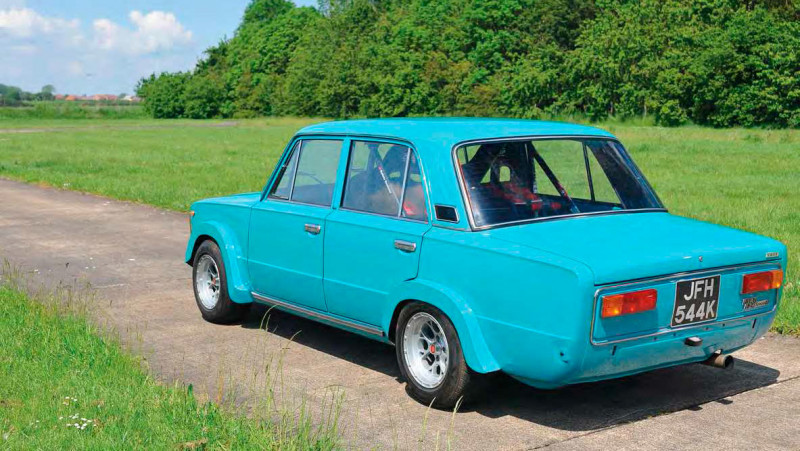 Designed in-house by chief engineer Oscar Montabone, the 124 featured a spacious interior, advanced coil spring rear suspension, disc brakes on all wheels and lightweight construction. Under Aurelio Lampredi’s expert guidance, the all-new in-line four-cylinder engine comprised an iron block with an aluminium cylinder head and pushrod actuated valves. The first model was almost square, using a bore of 73mm and a stroke of 71.5mm to produce a displacement of 1197cc. A larger 1438cc version with an 80mm bore arrived in 1968: the 124 Special.

Production for the new car was set up at Mirafiori and in the meantime Fiat had already begun negotiating with the USSR to sell it production rights and to set up a factory in Russia. The 124 was set to become a true ‘world car’.

In 1971, the twin cam engine was introduced and it transformed the car’s personality. The first series 124 Special T was basically the 1438cc four-door 124 Special saloon with a twin cam cylinder head. It was manufactured between 1971 and 1972 and was supplied with a four-speed gearbox and a 4.1:1 axle. The engine was rated at 80hp at 5800rpm, which was 10hp down on the power output of the equivalent Sport models.

While the pushrod 1438cc engine worked well enough at the lower end of the rev range, the twin cam version excelled at high revs. The Fiat 124 saloon in this form had dual-circuit brakes, an alternator, twin headlights, a heated rear window, a rev-counter and radial-ply tyres as standard. However, despite its promising specification, the car was considered to be somewhat uncivilised in the handling department and the brakes were criticised for being overservoed. 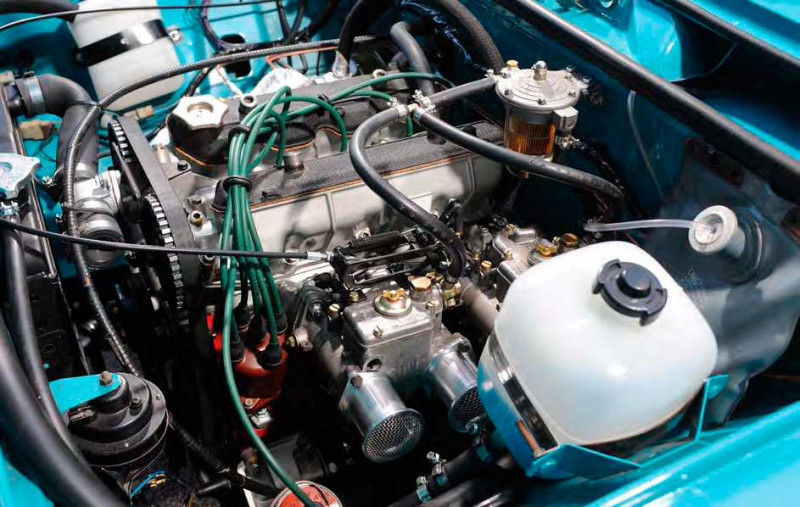 Because of its low gearing and the lack of a high top gear, which the five-speed Sport transmission would have provided, the car was noisy, but in comparison with the other 124 saloons it performed well. However, it was felt to be in need of high-quality tyres because without them the car's handling could fluctuate from excessive understeer to excessive oversteer. The recently introduced lowprofile Pirelli CN36 in 1968 fitted the bill perfectly. The later series of cars, which were produced in 1973 and 1974, can be identified by their ‘1600’ badge on the bootlid and also by a different Fiat name badge on the grille.

The earlier adverse comments about the 124 saloon's handling and noise were heeded because the suspension settings were revised and the final gearing was raised to 3.9:1. The ratios in the five-speed gearbox, which was now fitted, were effectively the same as in the four-speed unit but with an overdrive fifth added on. The 124 ST was a real Q-car, its conservative appearance disguising the twin cam engine's performance, making it an underrated, practical and easy-to-tune classic with great potential as a road car or even as the basis for some enjoyable budget-priced competition.

And that’s what I had in mind when I purchased a sad-looking rolling shell on a dreary day in Bristol back in 2007.

I had recently sold my much loved and much enjoyed Fiat 128 rally restomod as it was starting to look a bit tired and had served me well for 10 years. 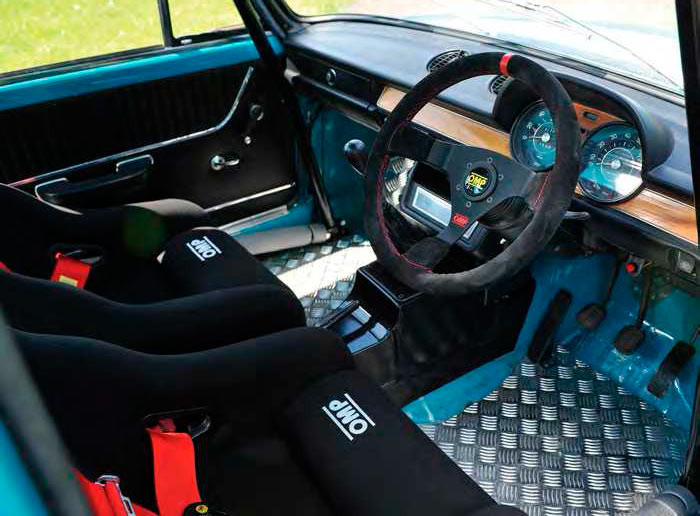 As a lad, I always wanted a 124, a rear-wheel drive Fiat with bags of potential for fun and frolics. At the time we had in our possession a brand new 124 Special shell which had languished under a tarp on the drive for many years until it was sold on. There’s something very cool about a stripped-out shell, and as an impressionable teenager the seed was planted. I never wanted to go down the predictable and often half-hearted 124 Spider route. Now there’s nothing wrong with a restomod Spider, it’s just that to go full ‘Abarth’ takes a lot of effort to get it right. Many owners simply buy an American import, whip off the bumpers, cut the springs and paint the bonnet and boot black. That’s not really my style and I do like to be different.

Once I’d got the shell out of the rain and fell upon the boxes of bits, an idea was starting to form. While the original owner insisted that he would supply an engine and the missing Minilite alloy wheel, this never actually happened.

As it turns out, I had already sourced an engine from an Irish rally car fan and collector, Pat Horan. The Guy Croft 1800 twin cam was all in one piece and on face value looked ready to fit. Many years later this turned out to be a very naive assesment on my behalf, as the engine was in fact a mess and took many hours at Barkaways and quite a lot of money to rebuild. Lots of parts were missing or broken and some parts had to be remanufactured to fit this odd little engine. After being shunted from garage to storage to specialist to garage, the car was finally painted in 2017 by CCR Coachworks in Bedfordshire.

The colour is called Lago Verde and was originally a SEAT colour. As there are only about four Special Ts left in the UK, you definitely won’t see another in this colour. I think it suits the car well and almost glows in the sunshine. The easy bits to source at the time were the engine and gearbox. These days, they are getting thin on the ground. The gearbox was rebuilt by Middle Barton and the propshaft was shortened and balanced in the Midlands. Most other parts were found on an auction site and purchased on a regular basis, again from Middle Barton Garage.

The rollcage was supplied by Safety Devices and fitted and seam-welded by Dom Delaney, an ex-Ralliart engineer in Droitwich. Dom’s 10-year old son at the time helped to remove some of the rustproofing and nowadays is a fully-fledged rally driver!

How time flies. The seats, steering wheel, harnesses, foot plates and so on are all by OMP as I wanted all-Italian products. These were purchased from the top guys at YB Racing.

For the suspension, I chose GAZ shocks and springs with adjustable trailing arms made by Ian Nixon. Ian also sold me the super exhaust system from his Time Attack Lada, which in the end I was only able to use half of. Despite Middle Barton’s best efforts, the manifold was never going to fit so a standard steel item has been used to get the car moving and miles covered.

At some point I will have a bespoke system made which will release a few more horses and sound better.

The new 45-litre fuel tank was made by Compbrake and we had them fit a 124 fuel sender, which was sensible idea. In the engine bay there’s lots of room and the 1800 doesn’t stand tall or rub on the rear bulkhead. That can’t be said of the five-speed 131 gearbox, as the transmission tunnel had to be altered drastically and still the unit was persuaded to fit.

So does it work? I am pleased to say that it’s noisy, bouncy and smelly and attracts a lot of attention – just what I wanted.

At the time of writing, I have only covered just over 300 miles and can already see its potential. There’s still so much more fettling to do but that is to be expected when you effectively build a kit car from a collection of parts which were not from a 124 Special T. The engine is stunning and spins freely up to 6000rpm but I’ve not pushed it further as it needs more miles and a good session on the rolling road to set up the twin 45 webers.

The five-speed gearbox with its long-throw shift is great, albeit slightly noisy, but then everything is noisy on this car. The wheelarches rub on the rear wheels which isn’t a surprise as they were fabricated when the car had no motor or transmission or in fact anything inside! Not a major issue but something to put on the to do list.

The rear wheels can easily be spun in first and second gears; perhaps better tyres would be an idea! For now I am very happy to potter about the Bedfordshire countryside putting on the miles and getting the thumbs up from all manner of drivers, be they truckers or mums in MPVs. It seems, like my 128, most people appear to get it.

The aim this year is to attend plenty of events, starting with, if COVID restrictions allow, the Auto Italia Italian Car Day at Brooklands and perhaps the Silverflag hillclimb one day. It’s been a long while coming but it was worth it.

A huge thanks to all the companies and friends who have helped out with and advice and parts over the last 13 years:

That is one hell of a car, and a very nice write-up. I appreciate your distinction between the «Abarth» style cars you described and yours. Some have the vision, and some have the combination of knowledge and skills. Still, others have vision, knowledge AND skills as well as friends!

The 124 Sedans are equally scarce here in the States, and they are on my short list of dream cars for a hot street racer.

The part crediting the guy's 10 year old making his contribution is appreciated, as I recall being paid well for scraping a LOT of undercoating off my dad's Porsche at a similar age...