How to turn Rolls-Royce electric

With a little help from BMW and a lot of on-road testing. By Colin Overland.

First things first. Isn’t this just a more expensive BMW i7? Rolls and BMW both say no. They concede that there is sharing of knowledge between Goodwood and Munich, and that the Spectre’s battery was developed with BMW. But they stress that all the components crucial to how the first all-electric Rolls-Royce drives are bespoke.

While the BMW has to serve the traditional limo role of being as good in the back as it is the front, the Rolls-Royce is purely a driver’s car, with a very traditional interior similar to the Ghost’s. And like the Ghost, the Spectre has a version of BMW’s OS8, but it’s so well integrated – and finds a use for so many more physical knobs and switches – that you’re barely aware it’s the same system; like the relationship between BMW and Rolls in microcosm.

THE WHOLE ROLLS RANGE WILL BE ELECTRIC-ONLY BY THE END OF 2030, BEATING BMW ACROSS THE LINE

The key to the differences between the two cars is not the electric powertrain but the chassis. The BMW uses a version of the CLAR platform, which can be adapted for full electric in the case of the i7, but also petrol, diesel and plug-in hybrid 7-series. The EV-only Spectre has a different chassis, a version of the aluminium spaceframe Rolls uses in the current Ghost, Cullinan and Phantom.

BMW CEO Oliver Zipse told CAR at the Goodwood unveiling of the Spectre: ‘It’s the same engineering knowledge, just differently applicated. You sit in a Rolls-Royce and it’s not a 7-series. Of course they have synergising elements underneath, but the customer will never see that.’ With its underfloor battery and e-motor at each end, the Spectre is close to 50:50 weight distribution, and a low centre of gravity. The stiffness of the battery aids body control and allows Rolls to fit its biggest ever rear-hinged door. Like the Ghost, the Spectre has Planar suspension, which involves an extra damper on each suspension unit, chiefly to smooth out the small bumps that can cause high-frequency vibrations. That’s coupled with Rolls- Royce’s Flagbearer system, which scans the road ahead to check for imperfections, bracing the hardware accordingly, and if necessary disconnecting and rapidly reconnecting the anti-roll bar to optimise cornering stability.

Rolls-Royce CEO Torsten Müller-Ötvös stressed that electric power was in tune with the hushed, smooth, powerful characteristics customers wanted: ‘It’s a Rolls- Royce first, electric second.’ The whole Rolls-Royce range will be electric-only by the end of 2030 – actually beating BMW across the line. Müller-Ötvös added that he wouldn’t rule out hydrogen as a future energy source.

We’ve not yet driven the Spectre, but from the passenger seat it feels like a smooth, fast and composed GT. The engineering team are far from finished, though. They still have hundreds of thousands of miles to complete as they bring the final degrees of finesse that help make a Spectre worth £300,000-plus, rather than the £100k-plus of the i7. They are also patiently trying out multiple options for the brake-energy recuperation system – a modest two levels at the time of our passenger ride, but that could change before the first customers get their cars at the end of 2023. The cars are being built on the same Goodwood production lines as the other Rolls models. The hoists and trolleys that carry the part-built cars through the factory were modified during the summer shutdowns of 2021 and 2022 to cope with the hefty batteries they will have to deal with during Spectre production. 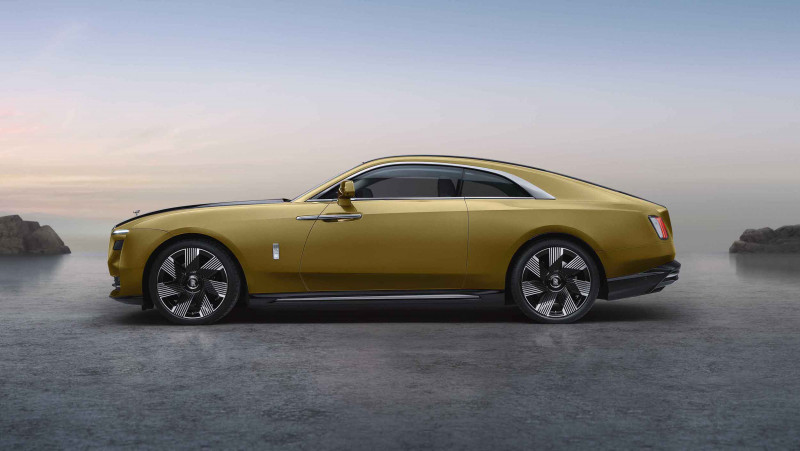 Drag coefficient of 0.25 makes this the sleekest Rolls ever, despitethe grille

…OR A BMW AT ONE-THIRD THE PRICE?

The figures so far made available show that the four-door, five-seat BMW limo and the two-door, four-seat Rolls coupe are similar in many ways. They both have an electric motor at each end, all-wheel drive and all-wheel steering.

Despite its coupe styling, the Spectre is 15mm higher and 62mm longer than the i7. It uses different suspension and its wheelbase is 5mm shorter, at 3210mm. The Spectre rides on 23-inch wheels, where the BMW’s standard rims are 21 inches.