The new fifth-generation Range Rover L460 is available to order now, priced from £94,400, and costing £10k more than the outgoing version. It gains new plug-in hybrid powertrains, upgraded technology and an updated, cleaner design. It is offered in standard and long wheelbase bodystyles, and with four, five or seven seats. Land Rover has also announced that an all-electric Range Rover is set to debut in 2024, beginning a new era for the ‘original luxury SUV’.

Its exterior design has been refined rather than reimagined, with new digital LED headlights that are said to mimic cut-glass, while the front fog lights, radar and parking sensors have been concealed within the lower aperture for a cleaner look. Designers have even reduced the clamshell bonnet shut line by around half, for a more cohesive look.

The Range Rover’s trademark side intakes have been made flush, and there’s now a gloss black sill running along both sides of the car. The side glazing has also been given a smooth, uninterrupted appearance, with no steps between the glass and pillars. The SUV’s roofline has been lowered by 10mm, and there’s the option of huge 23-inch wheels for the first time for any Land Rover. At the rear, vertical lights are now encased in a single gloss black panel, and are hidden until illuminated. With a drag coefficient of 0.30 Cd, Land Rover claims it is the most aerodynamic luxury SUV on the market. 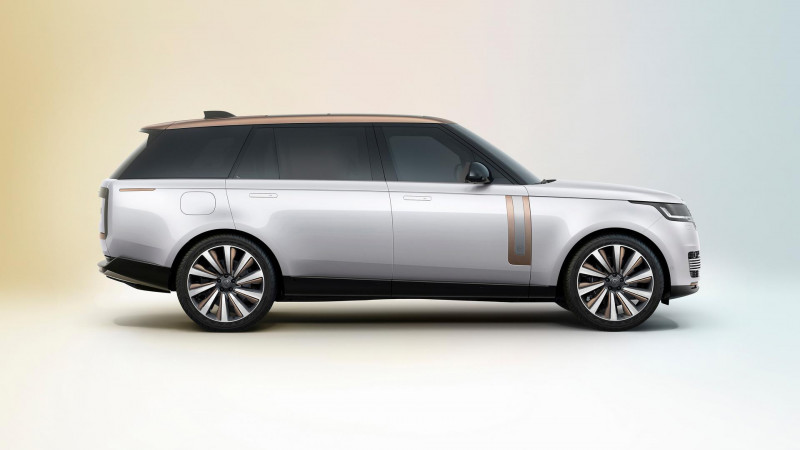 Inside the filtered and purified cabin, a curved ‘floating glass’ 13.1-inch touchscreen dominates proceedings, loaded with Land Rover’s latest version of its Pivi Pro infotainment software and featuring Amazon Alexa voice recognition. A 13.7-inch instrument display has also been engineered as a ‘semi-floating panel’, while the steering wheel also gets controls that remain hidden until they’re lit. Stadium seating has been used to ensure rear passengers get a good view out, and occupants of all seven seats can connect digital devices and operate the four-zone climate control.

SE, HSE and Autobiography versions will be offered, along with a First Edition trim level during the first year of production. The latter is based on the Autobiography specification and is finished in Sunset Gold Satin paintwork. Leather is no longer the only choice when it comes to opting for luxurious upholstery, thanks to a new choice of ‘Ultrafabrics’. These are premium textiles that are said to generate a quarter of the CO2 of leather during their manufacturing. Third-generation active noise cancellation technology will also be available, using 35 speakers that now includes 60mm speakers within the headrests of the four main seats, to create ‘personal quiet zones’ and reduce exterior noise. 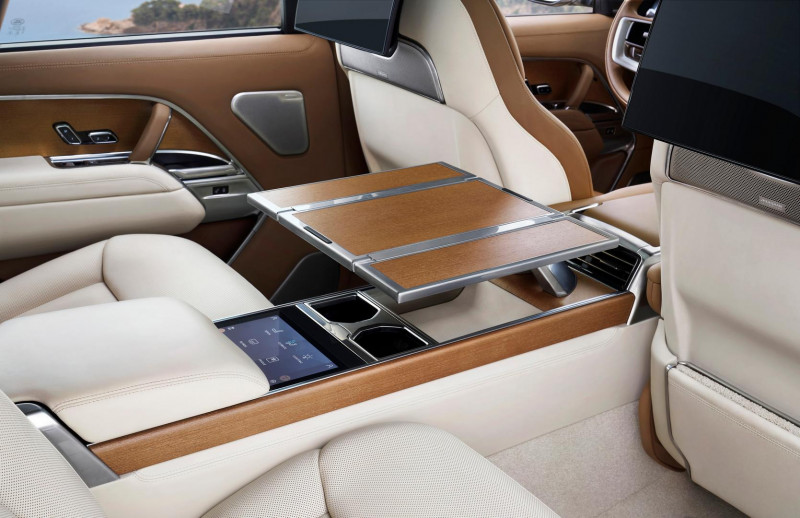 The plug-in hybrid versions get a larger 38.2kWh battery (with a usable capacity of 31.8kWh), that’s mounted under the floor to avoid diminishing cabin space – a full-size spare wheel can be carried if desired. There are P440e and P510e versions L460, both featuring a 3.0-litre six-cylinder  Ingenium petrol engine for the first time, together with a 141bhp electric motor, with combined torque figures of 457 and 516lb ft, respectively. They boast an electric driving range of up to 62 miles, for sub- 30g/km CO2 emissions. According to Range Rover’s own UK customer data, it expects owners to be able to complete 75 per cent of their daily journeys in the EV mode without needing to charge the battery away from home.

Diesel power will be familiar to current Range Rover drivers, with the D300 L460 and D350 L460 models continuing as before, and utilising a six-cylinder Ingenium diesel engine with 296bhp or 346bhp. Both feature 48-volt mild hybrid hardware, with a belt-integrated starter generator to provide near-instant engine restarts and a small power boost under acceleration. The diesels deliver fuel economy figures of up to 37.2mpg and CO2 emissions of between 198 and 204g/km, depending on version.

It isn’t often that a new Range Rover arrives. While most new cars have a shelf life of around six years, Land Rover has managed to stretch out the current model’s life to almost a decade, by the time the latest car – L460 – goes on sale next spring. And while most cars get a mid-life facelift halfway through, Professor Gerry McGovern OBE – Jaguar Land Rover’s Chief Creative Officer, to give his full titles – believes in careful evolution, with a series of changes made over a number of different model years, allowing the customer to be carried along the design journey.

I won’t spoil the big reveal on, however, Land Rover’s design team really deserve a big pat on the back for the latest car. There’s so much more to the styling than at first acquaintance, with little touches that really surprise and delight. Like the absence of seals around the windows, the tighter shut lines and the gorgeous simplicity to the rear end. It isn’t until you see the old L405 model and the brand new L460 side-by-side that you begin to notice the differences between the two cars. Like how intricately jewel-like the new headlights are, and the way that they intersect with the front grille.

I had the pleasure of having the new car presented to me by Production Design and Quality Director, Andy Wheel, who went into some detail about how difficult it usually is to get the proportions right on standard and long wheelbase vehicles. It isn’t quite as easy as adding a few centimetres into the rear doors, and the hard work of the design team has paid off, as you will be hard pushed to differentiate the two from each other, aside from an ‘L’ badge on the extended car. For the first time in the flagship car’s history, there’s a choice of five- and seven-seats, and when they say seven seats, they mean seven proper seats, with space to spread out, even for those taller than six foot!

At the launch of L460, the workers at Solihull are starting off building just with petrol and diesel engines. While the D300 and D350 straight six diesel units with mild hybrid technology are familiar, the P530 twin-turbocharged V8 petrol unit is a brand-new, heavily modified BMW-sourced powerplant that has been uprated to cope with the kind of punishment that every Land Rover has to go through before it can be put on sale to true off-road fans. Next year, a pair of plug-in hybrid engines will arrive (P440e and P510e), this time paired to a six-cylinder petrol unit, rather than the 2.0-litre four-cylinder affair from before, boosting refinement enormously. And in 2024, a pure electric drivetrain will go on sale, delivering the most diverse range of powerplants in a Range Rover, ever.

It is with great sadness that the Vogue badge is retired, and that’s due to licensing issues in some markets with the magazine of the same name. Instead, this time around, versions of the Range Rover will simply be called SE, HSE, Autobiography and First Edition in all countries.