To paraphrase Mark Twain, reports of the death of Alfa Romeo’s Giorgio platform have been greatly exaggerated. There was a real news storm recently when Alfa Romeo’s new boss, Jean-Philippe Imparato, was quoted saying that Stellantis will “no longer use the Giorgio platform”. Cue shrieks of ‘Alfa axes the Giulia!’ and ‘Stelvio is dead!’. Forums were awash with comments like ‘what happens to my QV order now?’. Turns out this wasn’t really the story at all. Such was the furore and the misinformation around the quote that Imparato was forced to clarify the position. So what are the facts? Imparato originally told the press: "We are working on the ‘Large’ platform at Stellantis and we will no longer use the Giorgio.” Subsequently, Imparato clarified his statement: “The Giorgio platform will not be axed but will be integrated into the system of Stellantis architectures.” So Giorgio lives on after all; the Maserati Grecale will use Giorgio as planned; the Giulia and Stelvio are in no danger of being axed. Phew. It’s also good to hear that Alfa’s product plan currently includes a whole line of new Quadrifoglio models. “Proposals will be evaluated and we will not betray the spirit of the Quadrifoglio,” says Imparato. “If we believe that a sports version cannot be built on a car then we will not do it.” Another positive to come from Imparato is an end to Alfa’s constant to-and-fro on product planning: “We need stability. What we are doing is putting a plan on track over 10 years… Once this is done we will not change.” Expect to hear more about Alfa’s future plans after the launch of the new Tonale SUV, which will arrive in Italian dealerships in June 2022. That’s a delay of about six months because Imparato felt the Tonale needed an urgent upgrade in performance, as well as being launched from day one in plug-in hybrid form. He also confirmed that a new, smaller Alfa Romeo SUV model will be built in Poland. All in all, Alfa’s future is suddenly looking a lot rosier.

Can you hear it? Strain your ears and maybe – just maybe – you will be rewarded by a promising noise: nothing less than the sound of the future. The theme of sound has been constantly in my mind this month. It started well with a longawaited test of Ferrari’s new 296 GTB. Ferrari has always said that sound is an integral part of overall performance at Maranello but I did fear that the new V6 hybrid era that the 296 would represent a backwards step in this department. Instead, I’m delighted to report that the 296’s V6 has a truly great soundtrack. 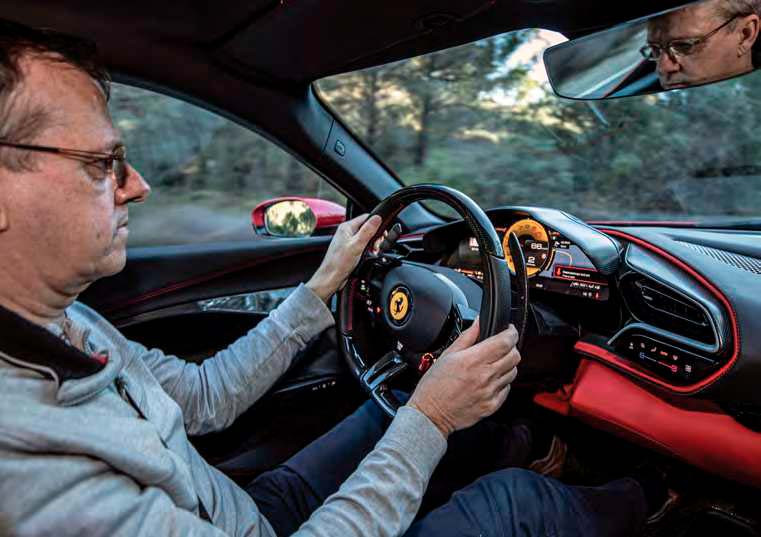 But what about sound in the coming full-electric age? How will that play out? To date, pretty much every electric car I’ve driven has had a painfully artificial noise. Piping fake noise into car cabins is one of my absolute bugbears. I tested an electric BMW iX lately and it sounded like a TGV train (and drove like one, actually). Small wonder that BMW has hired Hollywood film composer, Hans Zimmer, to concoct more interesting soundscapes for its electric cars – but they’ll still be artificial.

Here’s an interesting development, though. As you can read on page six, Maserati says it has found a solution to the pure-electric sound issue. It’s developed a way of making electric motors make “an authentic Maserati growl”, with zero piped muzak. I don’t know how they’ve done it but it’s a genuinely intriguing move that I can’t wait to experience next year when the new GranTurismo Folgore launches.

I do hope Abarth finds a way of using the same technique when it goes full electric in 2024. I’ve just bought an Abarth 595 Competizione because its Record Monza exhaust has such a great sound. My other car, an SZ, has a Busso engine with simply the best V6 engine/exhaust soundtrack I’ve ever experienced. Let’s hope the future sound of Italy is every bit as spectacular as these classics.