Mixing a wide body with traditional rear-wheel-drive, the 911 Carrera S is a highly desirable 993. Here’s your complete dossier of information on this collector’s gem. Written by Kieron Fennelly. Photography by Damian Blades. 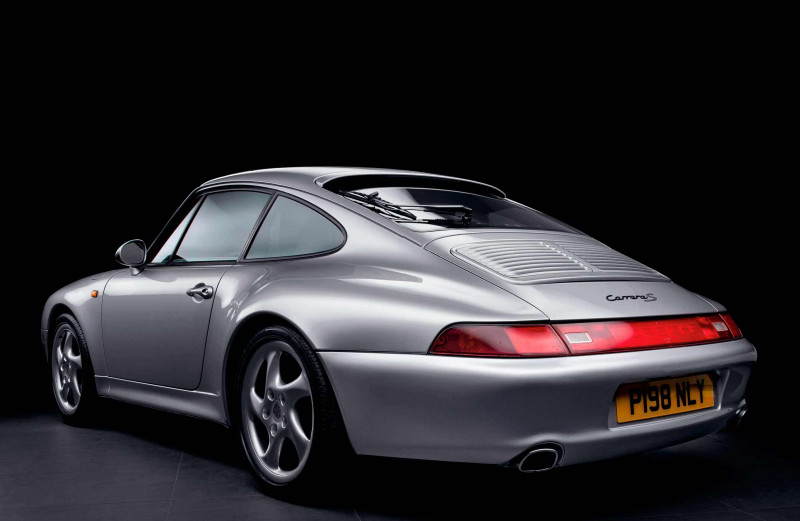 The 993 was the evolutionary descendant of the 964 which had arrived at a time when Porsche’s financial woes were beginning. The 964’s disappointing sales led to a fundamental reappraisal of the 911: in the performance stakes it was still class-leading, but in terms of handling and refinement, critics felt it was falling behind competitors. Plans for the 993 were laid in 1989 as soon as new broom engineering director Ulrich Bez arrived and the objective, challenging given Porsche’s impoverished resources, was clear enough: refine the 911 to extend its appeal while reinforcing its ‘911-ness,’ that palpable collusion between driver and car which had so characterised the 911 from the outset.

Porsche was barely profitable and plans to revise the roof line, countersink the exposed windscreen wipers and update the cabin never materialised. Nonetheless, Tony Hatter’s fared front wings and smoothed and subtly flared haunches met universal approval; all the road tests commented on the more secure handling endowed by the new rear suspension, the multilink configuration which would underpin at least two more 911 generations, and above all the much-improved ride and refinement. A systematic lightening of reciprocating parts and better breathing enhanced both smoothness and the 3.6’s power and torque; Japanese consultants brought improved manufacturing techniques and the 993 not only cost less to make than its predecessor, it proved more popular and started making profits again. Its success encouraged Porsche to reprise the Turbo-look 911 of the 1980s. The 1995 4WD 993 C4S used the wider Turbo bodyshell (without the spoiler), suspension and brakes and the Turbo’s leather interior, but the Carrera’s naturally aspirated 3.6. Capitalising on the very favourable response, a year later Porsche added a lower-cost version, the C2S, which also featured the Turbo body but otherwise used standard C2 running gear and interior, though it was distinguished by a striking split rear grille, a clever homage to the original (356) Carrera 2.

Jonathan Leach of Cridfords says that prices pushed up artificially, as most Porsche values were at that time, tended to fall as quickly. The S models were not exempt from this, but their rarity – 3,049 C2Ss and 3,772 C4Ss were made – has caused both wide bodies to appreciate in a far more sustainable way since then. They are iconic 911s and the best will still go for six figures, but a C2S tends to play second fiddle in values to the C4S, which although usually regarded as less desirable because it is 4WD, does in fact sell for more, says Leach. Porsche specialist Phil Raby, who has been writing about or selling 993s almost since they were new, observes that these are rarely seen models and concurs that S pricing is more likely to go up than down.

A well-maintained 993 is very satisfying to drive. The steering, firm initially, seems to lighten at higher speeds and displays that tremendous feel and accuracy, the Porsche hallmark. In town, the gearshift can feel heavy, throttle take-up is not always seamless and the 993 follows the air-cooled 911 tradition of being slightly unhappy in stop-start traffic. Here the four-speed Tiptronic is smoother, but once the road opens up, the driver will want the Getrag manual, whose six perfectly chosen ratios makes the most of the VarioRam engine’s torque curve and 285 horses. As with the steering, the gearshift too becomes easier and moving up and down through the 'box is an essential part of the agreeable interaction between man and machine. Although a far from quiet car, the engine fan is a constant reminder there is no water jacket. Using the Turbo body means the S has a stiffer chassis than the plain C2, while its rear-wheel-drive element means it is the enthusiast’s choice over its C4S sister. Weighing only 30kg more than a plain C2, the Carrera S feels firmer than the C2 and on uneven roads, body control is perceptibly improved.

The C2S model is simply a version of the 993, so the usual 993 caveats apply. A solid OPC or recognised specialist maintenance history is vital and it should be consistent. Mark Sumpter of Paragon Porsche usually turns away from cars with more than three-year gaps in their history. That said, the 2S was a premium priced special and usually covered far lower mileages, enjoying a rather more cherished existence than the plain C2, some of which had to work hard for their living, especially as the 993 was notably reliable.

Corrosion is not the fundamental problem that dogs 3.2s or earlier 911s, but 993s themselves are old cars now and inevitably suffer the ravages of time. Rust can occur around the windscreen and rear window, though on a well-presented car, this area should already have received attention; more insidious is corrosion inside the rear bumper which will require substantial dismantling to repair. A worn clutch reveals itself by being unpleasantly heavy – the 993’s pedal was never light, and declutching only at the end of its travel; dampers too will be less efficient after two decades, but the service record should show evidence that these components have all been renewed. Similarly, the vulnerable front valance may have been replaced at some point. If it is not realigned precisely this suggests a complacent body shop and should prompt further investigation, but a little used and correctly presented £100,000 Carrera S should display none of these worn 993 faults and drive almost like a new car.

The specialists blanche at the notion of a 911 as an investment – ‘it’s a sports car to be driven’ they cry in unison. That said, it is clear that in the long term, some 911s have done better than others.

Those who bought, say, a 2.4S at the height of the boom in 2016, or earlier a 964RS when it was almost a craze, may yet be waiting to break even, but the smart money is usually on the models that had very limited production runs. The Clubsport (340 made for worldwide markets) or the Turbo-bodied 3.2s and 964s are examples – cars which for years, unlike the 2.7RS, tended to escape attention. The 993 Carrera S, a 911 that was always exclusive, falls very much into this category.

In Phil Raby’s opinion a handsomely optioned C2S is unlikely to lose value in the current climate where financial pundits foresee growth in non-monetary investments such as art and classic cars.

The most technologically evolved air-cooled 911, aesthetically the 993 is further enhanced by that wide body, which emphasises its striking profile and rear three-quarter aspects – especially without the Turbo spoiler. The wide body cars are the most aspirational 993s, purchased above all for their looks. At 1,400kg, the weight penalty over the narrow-bodied car is negligible and Porsche performance data indicates the only loss was 3mph from top speed.

Jonathan Leach adds, “The 993 2S is not just special, it is a very usable sports car. You can drive it to the limit of its performance.” Still relatively low-profile compared with more famous or exotic 911s, the 993 Carrera S offers the discerning enthusiast a driver-focused, potentially better-handling 993 which is also a discreetly exclusive 911 and of course, the pinnacle of the air-cooled Porsche.

BELOW Most 993 C2Ss were optioned with 6-speed manual tranmission but 4-speed Tiptronic was available, as here.

A HANDSOMELY OPTIONED C2S IS UNLIKELY TO LOSE VALUE

Full leather upholstery and (functioning) air conditioning are the most sought after. Most if not all C2Ss were specified with 17-inch wheels and many with the Sport suspension (M31) which lowered the ride height. Another option worth seeking out is the limited slip differential (MP08) which much improves the 993’s traction out of tight bends. A special-order colour, for example Ocean blue metallic, is also worthwhile, but the Tiptronic cars are worth 30 per cent less than manuals, observes Jonathan Leach, adding that the auto ‘box does not suit a classic 911, which is unlikely to be commuting in traffic anyway. When they were new, the Turbo spoiler was a popular option, but they may now seem ostentatious to some tastes.

A rare 911 even in LHD, a Clubsport is a deeply satisfying but more demanding drive for the price of a concours 2S; exciting car though it is, the Clubsport’s rudimentary equipment level and raucous engine make it altogether less suitable for longer distances than the more refined (and just as quick) C2S.

£80,000 buys a ten-year-old, low-mileage example, equipped with PDK-only, which makes for more relaxed progress. Brilliantly conceived 650 horsepower supercar that it is, the Turbo S, also subject to higher depreciation and maintenance costs (and unexploitable power), might seem extravagant to a classic enthusiast.

An exceptional SC at £70-£80K is an alternative to a higher-mileage C2S. Purists may rate the vintage driving experience over the 993, but the SC might be a shade too vintage for later 911 fans. A good SC presents more of a challenge than a C2S, but potentially more fun only for the kind of buyer who had considered a Clubsport, but found it beyond their budget. ABOVE That beautiful split rear grille is unique to the 993 C2S evoking the original 356 Carrera 2 In all markets the Carrera S has a particular cachet, and this is even more apparent in the UK. Prices fall between £70,000 for a Tiptronic C2S to £90,000+ for a fully optioned manual C2S. The £70-£100,000 bracket certainly opens a broad swathe of other 911 possibilities.

At around £70,000 for a 2018 model this, the most ‘traditional’ of the modern 911s, might appeal to a C2S buyer, though its everyday practicality could be offset by its far larger dimensions. The modern models have nothing like the visibility of earlier 911s, and the Carrera T will also depreciate significantly, like most current Porsches.