Reader’s restoration: When Kevin McDermid found this rare Mk1 Escort 1300GT he decided to be different… and restore it to factory standard condition.

When Kevin McDermid found this rare Escort 1300GT he decided to be different… and restore it to factory standard condition. 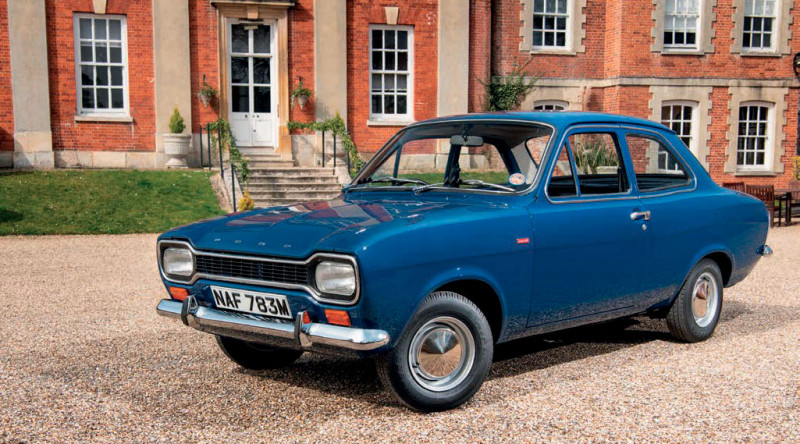 To be strictly accurate, Kevin McDermid’s Mk1 Escort is a 1300 Sport with a Pinto that looks like an RS1600. But we’re here for the other car in his life; a virtually stock 1973 Escort 1300GT. “The GT belongs to my wife Maria,” explains Kevin, “it was her birthday present that I restored with help from various friends.” Maria and Kevin are very much a Ford family: “We’ve had Mk1 and Mk2 Escorts, Capris, a Sierra 4x4, an RS2000… and Maria wanted a Mk1 to take to shows. The GT had sat outside the workshop I share with my mate Gary Cook, it looked solid so I bought it from him in 2018.”

For much of its life the Escort was a one-owner car. “A retired army major bought it at Mayne’s Garage in Redruth, Cornwall on August 1, 1973 as one of a pair of 1300GTs,” continues Kevin, “the other one was red and became his wife’s. Gary had bought mine about 10 years ago from a 15-year-old who, so far as we know, spotted the cars when the Major’s house was being cleared and bought the pair for just £50. Gary says the registrations were one number apart but doesn’t remember much about the red GT other than it was in better condition. I’d love to know what happened to that one…”

The blue GT however turned out to be anything but solid. “I stripped it to a bare shell and sent it for blasting. It came back perforated,” admits Kevin. “Every panel was pitted. Thankfully Magnum had most of what I needed.” The Escort went to Trig Bishop of Bishop’s Bespoke Builds and received new front and rear panels, inner wings, bonnet, bootlid, complete floor, bulkhead repairs and even a new roof. “A friend bought a shell and sold me the roof — at the time you couldn’t buy one new — we unpicked the A-pillars and it went on fi ne. I’d like to have done all the bodywork myself but lack of time and workshop space prevented it.”

Tony Littlejohn of GTR Motorsports in Andover sprayed the Escort in the original Marine Blue, carefully mixing and matching it to an area of surviving paint. “He owed me a favour and now I owe him lots of favours,” laughs Kevin. “Tony does classic Porsche restorations so the Escort came out perfect, there was no way he was going to add deliberate orange peel to replicate a factory fi nish. In fact, he insisted we replace both rear quarters before he’d even touch it. We finished it with blue-tinted Raptor underneath, I was aiming for near complete originality but this was still a car that would be driven.”

“I THOUGHT ABOUT SAVING THE ORIGINAL TYRES BUT WHEN I REMOVED ONE IT SNAPPED IN HALF...”

The rest of the Escort was in pretty decent shape. “The Major was clearly a fan of rust prevention, he had the car Ziebarted at the dealership and then everything was covered in red oxide — including the backs of the bumpers and inside the hubcaps. However, the car had then sat since about 1996 and water had dripped onto it — hence all the bodywork issues, but much of the remaining work was simply a case of remove it, clean it and reinstall it.”

With 72,000 miles on the clock mechanical refurbishments were reasonably straightforward, testament to this being the car was running within two days of coming back from GTR. “The rear axle got new brake drums, shoes and cylinders but the bushes, original shocks and leaves were fi ne so they were just cleaned and painted. I stripped the front struts and added new springs, refurbished the front callipers and rebuilt the steering rack. I put on new track control arms and fitted new front rollbar bushes.”

It was much the same with the engine. “I stripped the Crossflow and the bottom end was in good shape,” continues Kevin, “I’m pretty sure it had been replaced under Ford’s Exchange-Engine scheme. I refurbed the cylinder head and fitted replacement service items along with electronic ignition, added new seals to the gearbox and fitted a new clutch — which was a gamble since I couldn’t test it until it was fitted — but the ’box turned out to be fi ne. The radiator was falling apart so was replaced, as were all the hoses. The exhaust was filthy but after a thorough clean I was delighted to see it was a stainless steel system.”

“I tried to keep the engine bay looking as original as possible so asked a few friends who worked on the cars in period as to the correct colours and label placement — the new stickers were £15. I had to buy a brake servo since that had gone missing, but that leaked so I ended up buying a second one.”

The interior is almost exactly what came with the car, just a lot cleaner. “I fi tted a new headlining since the old one had to be removed when we replaced the roof and it’d gone brittle and I got a new carpet from Roy Nunn, but everything else is original — even the wood veneer just needed cleaning. Roy Nunn also supplied new-old stock taillight lenses as the chrome on the originals had worn. New headlights came with the car since Gary had already bought them at an autojumble.

“The wheels were blasted and powder-coated. I wondered about trying to save the original Michelin tyres but when I removed one it snapped in half. There’s not much choice in tyres for 12 inch wheels now though, I think these were intended for a trailer.

“You can’t put old crappy parts back onto a nice, new-looking car so I started sourcing new trim parts. The front bumper had a big badge bar welded on so I found a new-old stock one, the rear one was rechromed along with the door handles. The window surrounds were a bargain; £40 from a guy in Bristol. All the badges came from Australia for only £70 and they arrived in original Ford wrapping. I hate wing mirrors so left those off and just fitted a door mirror, but otherwise I was restoring it back to original appearance. “The hockey sticks on the rear surround were missing — the Escort had clearly had a light rear end collision at some point and we’d found filler in the rear quarters. They were expensive to replace and drilling the holes to fi t them in the brand-new paint was terrifying.” Other new parts include the hubcaps and all the glass, “Though I managed to crack the front screen fitting it,” admits Kevin.

“I wanted to be different,” says Kevin, “you rarely see a GT on its original wheels — if it hadn’t been that rare it would have ended up with bubble arches and a Pinto. “Probably 90 per cent of the metal is replacement parts,” he continues, “but everywhere else it’s kept the heart and soul of the original car. It’s not fast but Maria still loves driving it.”

Kevin wants to thank his friends for their help with the restoration; Gary Cook, Allen Norris, Trig Bishop, Tony Littlejohn and the lads at GTR Motorsport; Sean, Ryan and Luir.

Classic Ford thanks Warbrook House Hotel in Eversley for the photography location.

Italian for grand touring the GT name was first applied to cars that mixed sports performance with luxury. How appropriate that description is when applied to a 1300 Escort is open to interpretation but the Escort was certainly an improvement over the outgoing Anglia 105E.

Escort 1300GTs got a 1298cc four-cylinder Kent crossflow engine with high-lift cam, dual-choke Weber, special inlet manifold and the exhaust manifold from the Cortina 1600GT. It was the only Escort in period with twin exhaust silencers and also boasted standard servo assisted front disc brakes and a close-ratio gearbox. The GT was launched in January 1968 as a two-door saloon and continued in production until 1974. Subtler than their RS sister cars, genuine 1300GTs are rare today.

Escort is now on brake servo number three after the replacement turned out to be faulty. Boot area carefully restored to original (right).

“I THOUGHT ABOUT SAVING THE ORIGINAL TYRES BUT WHEN I REMOVED ONE IT SNAPPED IN HALF...”

With wife Maria, wanting a Mk1 too, Kevin persuaded friend Gary to part with his rare GT. The car had been parked since 1996 and bodywise was in a bad way. Being a GT helped save it. With the GT now finished, Maria and Kevin now have a pair of Mk1s to take to shows. Interior just needed a deep clean — and a new headlining.

The rear quarters needed replacing, too — a job now much easier thanks to the availability of repro panels.

GT-spec 1300 Crossflow needed a top end rebuild but otherwise was in great shape. Original 12 inch steels for the win.

Stripping the car down to a rolling shell revealed the Mk1 to be pretty rotten, especially at the front. There was nothing for it but to carefully put the shell on a jog and cut the whole front end off… Finally, it was time to prep and paint the rust-free shell in fresh coats of original Marine Blue.