My name is Martyn Luke, and this is my 911 backdate, which is nicknamed ‘Starlight’. It’s based on a 993-generation manual 1994 Porsche 911 Carrera 2, and was built by a Yorkshire-based company called 911 Retroworks. It’s a bespoke build that they call a 993 GTR. I commissioned it in April 2021, during lockdown. It took 13 months to build, is the 13th 993 GTR built by the company, and was delivered on Friday 13 May!

Commissioning a build is a fascinating process. You can spec every aspect of the car, from the bodywork and engine capacity to the interior leather and even the colour of the tacho. It’s all in the details. 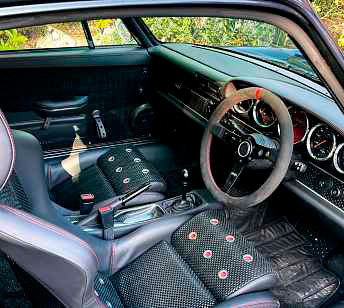 When we started discussing the spec, we agreed that the car should wear a unique paint colour, something that harks back to the heritage racing colours of the 1960s and 1970s. The colour is called ‘Starlight Blue’, which is actually an old VW colour, and is where the car’s nickname came from – my 11-year-old daughter loved the paint name, and so the car became ‘Starlight’. The paint has metallic flecks in it, and really pops in bright sunlight.

Once we had agreed the body colour, we established a palette for the rest of the car. We picked out the red from the brake calipers and the matt silver from the brushed aluminium 17in Fuchs wheels, and carried that through in the exterior side stripe and the interior detailing – the tacho is red, as is the stitching on the leather inside the cabin and in the ‘frunk’.

We had initially explored a red leather interior, but felt that might be a little unsubtle, so instead switched to black leather, with matching black Momo Prototipo steering wheel, black gearstick, and handbrake. The final cosmetic details included drilled aluminium doorhandles and bullet wing mirrors, which give the car an extra vintage feel.