Cult appeal means these are a safe place for your money – but prices are rising.

Ever since a magic Anglia 105E flew across the screen in 2002’s Harry Potter and the Chamber of Secrets, Ford’s ‘baby Thunderbird’ has been transformed from charming old saloon to decent investment. Fully-restored ‘Harry Potter-spec’ Anglias are routinely advertised for five-figure sums. However, they’re still affordable and slicker to drive than rear-drive contemporary, the Triumph Herald. Choose one of the more practical estates and you might find a bargain, such is the attraction of the saloon’s distinctive reverse-rake rear windscreen. Prices are on the up elsewhere in the Anglia range, but this means pitfalls – superficially shiny cars can hide horrors beneath. To find out how to buy a great Anglia, we spoke to John Reed of KMJ Restorations, Mike Wood of Old Ford Auto Services, and Ford specialist Tom Deville of restorer and race-preparer Team Deville to get the latest advice. 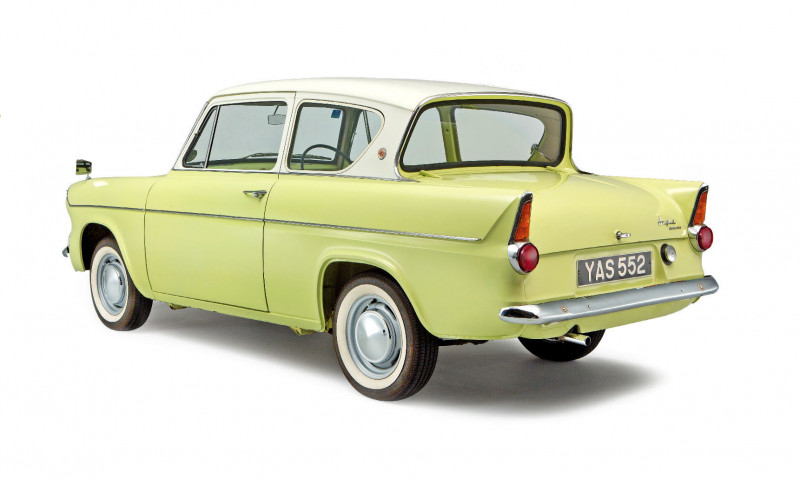 The Anglia 105E was launched in 1959 in Standard and De Luxe forms, both with a 997cc engine. The 307E van was introduced in 1961. From that point there was also a Ford-built Anglia estate. The Anglia 1200 arrived in 1962, designated 123E and with an 1198cc engine; the same powerplant was then offered in the van and estate. The Anglia Super was introduced with a 1.2-litre engine as standard, along with bigger brakes and improved interior trim. The squared-off Anglia Torino was launched at the 1964 Turin Salon, for the continental market. The Escort replaced the Anglia for 1968.

Rust has claimed most Anglias, so check everywhere for corrosion or filler. Start with obvious places like sills, wheelarches, valances and inner wings, along with A-posts and MacPherson strut tops. Also check floorpans, rear spring hangers and jacking points, plus door bottoms and around the headlights.

The middle of the door skin rusts from the inside, where there’s a water-absorbing foam patch that’s part of the window mechanism. Also expect corrosion in the double-skinned edges of the leading edge of the bonnet and the bootlid’s trailing edge. Same goes for the lower sections of the rear quarter panels, especially if the boot seals have leaked.

Windscreen seals harden then let water in, but new ones can be had via the club at £52 apiece. Triplex made a batch of laminated screens for the Harry Potter film cars, with far more being made than were needed, and they still filter onto the market.

All panels except the roof are available on a repro basis, but costs can be high. A new bootlid in steel costs £936, for example, whereas a rear wheelarch repair section is £132. Pricing up a full professional body restoration is tricky, because it depends on the severity of the rot. Each lower bodywork section costs between £130-200 per panel, with around £250-worth of labour involved in welding each section – and that’s before priming and repainting. A few small bits can soon mount up into a larger project, given rot’s propensity to spread in an Anglia.

The 997cc Kent unit will easily take 100,000 miles in its stride, but the 1200 motor is usually knocking by the time 40,000-50,000 miles have been notched up; it's because the flywheel is too heavy, which puts strain on the crankshaft bearings. The 997cc engine far tougher – with modifications, it can rev to 10,000rpm and can produce in excess of 100bhp. What kills these engines is lots of short journeys and lack of use. The valve springs can break, although replacements are fitted easily enough without the engine and cylinder head having to be separated. You can also expect fumes to be emitted from the oil breather. The Kent engine is simple and easily rebuilt; you can do it yourself for £300-£600 or so, depending on how much needs to be done. Get a specialist to carry out the job and you can expect to pay mote like £800-£1000.

Early engines had a hollow crankshaft, so they sound different – but they’re strong. Because these crankshafts are lighter than the solid items that were fitted from 1961, engines fitted with one are more free-revving. Timing chains wear on any Anglia engine, but you can buy a new chain and tensioner for just £22 from the club; this will probably transform noise levels.

Anglia engines seem to run on unleaded quite happily without signs of valve seat recession, although it can still be worth fitting hardened valve inserts if you're rebuilding the engine. At first the Anglia was fitted with a single Solex carburettor, although later examples received a Ford item. The latter can be unreliable, so most owners fit a Solex.

Gearboxes are indestructible, although synchromesh rings wear. Whereas the 105E has no synchromesh on first gear, the 123E has it on all ratios. The two are interchangeable, but you need to switch propshafts at the same time, because the later gearbox is longer than its predecessor. If a gearbox rebuild is required, everything is available. While you’re at it, it’s worth fitting 2000E internals to raise the gearing, although you can’t fit the whole gearbox because the original casing has to be retained. Whichever method you choose, expect to pay £2000 for parts and a further £500 getting them fitted.

Check for any shimmying felt through the steering, which usually indicates tracking that’s out of true. This is easy enough to fix, but the same symptoms can also point to worn front suspension struts. The fitment of crossply tyres can also give the same symptoms, so swapping to radials can fix things. Vague handling may also point to a steering box that needs adjusting or rebuilding; the latter is rarely necessary though, because there are enough decent used boxes to go round. Kits are available to convert to rack-and-pinion steering (£860 from Milton Racing) but a well-maintained box works fine. All Anglias had drum brakes front and rear, with the 1200 given larger items. Fitting a remote servo is popular and converting to discs is possible front and rear, but few owners bother with the latter; Milton Racing sells kits. The suspension consists of MacPherson struts up front and lever-arm dampers at the back; the latter are often swapped for telescopic dampers, which entails welding a bracket onto the axle casing. Each model (saloon, estate, van) has a different lever-arm design and they are not interchangeable.

Brightwork can be hard to find – especially the front bumper, which is also used by both the Lotus Elan +2 and Europa. As a result, when good-condition parts crop up, prices tend to be high because of demand from Lotus owners. The interior trim tends to last well, but it can get damaged or wear eventually. You won’t find any new original trim, but Aldridge Trimming can provide new carpet sets (£206), seat covers (£294-£367), and interior trim panels (£175- £294), while headlinings cost £166-£202. Carpet sets are also available from Coverdale (carcarpets.co.uk) at £170-£273. Front and rear windscreen seals are available through the club and cost £52 apiece. Standard and De Luxe Anglias came with a rubberised floor covering which goes brittle and is usually replaced with carpet. As a result, good-condition original rubber floor coverings are sought after because they’re not available as reproductions.

All Anglias came with a dynamo which works fine, although it’s not difficult to convert to an alternator – usually by taking one from a Ford Fiesta, complete with its mounting brackets. It’s getting harder and harder to find suitable parts now, however, because most suitable Fiestas have long since disappeared.

The headlights are seven-inch sealed beam units, so they’re easy to source – as are halogen conversions. All of the lighting is reliable and easy to find; the same goes for the instruments and switchgear, while new looms are available off the shelf for £260 from Autosparks. The only problem you’re likely to encounter is dirty contacts in the switchgear, but these are easily cleaned up. It’s also worth checking the condition of the interior light, because these go brittle. The part is shared with the Cortina MkI – but that doesn’t help, because there aren’t enough lights to meet demand.

New original trim is not available, but most items have been reproduced. The reverse-rake windscreen is probably the Anglia’s most distinctive feature – and if it leaks, you can still get seals through the owners’ club. Earlier 997cc Kent engine is more long-lasting than later 1198cc unit. Curiously, production numbers and attrition rates have combined to make estates and vans as sought-after as the saloons.

In 2003 Adrian bought the Anglia pictured. He says, ‘I wanted an Anglia to take historic racing – but this car was too good for that, so I kept it just for road use. A couple of years later I still wanted to get into motor sport, so I went out and ended up buying another Anglia – this time a van, so I still haven’t been racing. ‘Speaking of motor sport, tuning the 105E’s engine generally isn’t worthwhile; you’re better off fitting a bigger Kent unit, such as a 1.5-litre. Using this as your start point, you can achieve 100bhp with the right camshaft, carburation and some cylinder head work; twin Webers on a 1.5-litre engine can realise more than 110bhp.

‘The Anglia came with a 4.1:1 back axle ratio as standard (vans and estates were 4.4:1), but if you want more relaxed cruising (at the expense of acceleration) you can raise the gearing by fitting a differential from a Corsair, Capri, Escort or Cortina which also featured 3.7:1 and 3.9:1 options. You can go as far as a 3.5:1 ratio from an Escort MkII RS2000 or Ghia, although the Anglia casing must be retained.

‘To increase the stopping power, Team Deville offers a bolt-on disc conversion with modern struts. The Wilwood kit includes a pair of replacement struts complete with hubs, discs and calipers; you can upgrade the rears too.’

Ken is the 105E Owners’ Club’s technical advisor and has been around Anglias since the car was launched in 1959. Back then, he was the workshop foreman for Exeter-based Ford dealer Devon Motors. ‘I currently own 12 Anglias, but have owned more than 40 in my life,’ he says. ‘Over the years I’ve undertaken lots of mechanical restorations and recommissioning – including a Martin Walter pick-up replica, because none of the originals have survived. I’ve used Anglias as my daily transport since the early Sixties – and I still do.

‘The owners’ club has a comprehensive spares scheme which can supply most bits such as body panels (through Ex-Pressed Steel panels with a 10% discount), while the trim comes from Aldridge Trimming and there are discount arrangements with other key suppliers. There’s not much that’s unavailable on a new or used basis; bumpers are now being remanufactured and fuel tanks are now available again. Just bear in mind that some bits are made in batches, so you may have to wait for them to come back into stock.’

Peter McIlvenny of specialist classic car insurer Carole Nash says: ‘The Anglia is special because its popularity spans generations, which has probably been helped by a certain boy wizard – if you don’t know who I mean, ask your kids or grandchildren. As with most British classics, rust is the biggest problem, but spares and support is plentiful, so if you have the time or money anything is possible. There are some great modified examples, as you would expect – but if you’re looking for a top-end original, then £14k would be plenty. That said, you will find some great examples for less than £10k. Anglia values may not increase massively over the next ten years, but if they’re looked after and regularly serviced they don’t cost too much to run and will give you a lot of fun.’