Toyota’s rally icon is a smart-buy bargain – for now

It should be an icon. In GT-Four form the Castrol-liveried MkVI Toyota Celica dominated the 1994 World Rally Championship with the likes of Juha Kankkunen and Didier Auriol behind the wheel. It became the face of Sega Rally, and attained notoriety when it was banned from competition after scrutineers discovered Toyota’s ingenious spring-loaded turbo bypass valve. 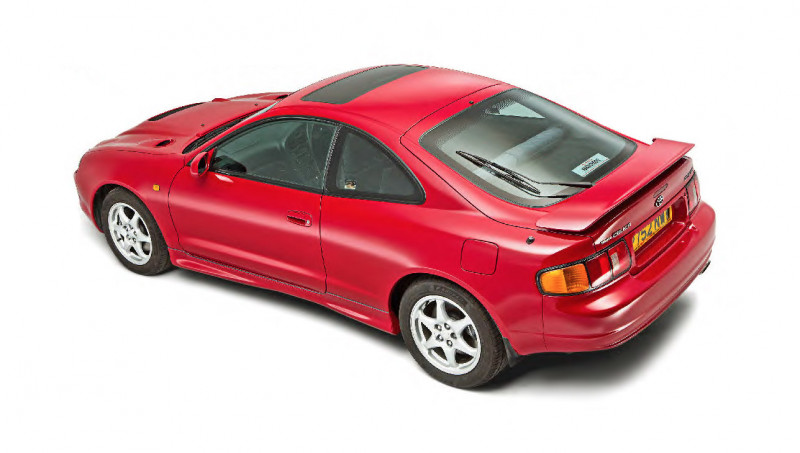 You won’t find this trickery in the road car, but all Celica MkVIs are lively to drive, blessed with Volvo-like build quality, and are available for little more than banger money in ST form. But prices are rising as the herd thins. To guide us to a good one, we spoke to Adrian Smith of FenSport, Mark Sheridan of Japanese grey-import specialist Fresh Imports, and Lee Mabbett of Se7en Motorsports.

Toyota launched the sixth-generation ‘T200’ Celica in the UK in February 1994. The base model was the ST, with a 1.8-litre engine, whereas the range was topped by the GT sharing its 3S-GE 2.0-litre twin-cam engine with the MR2.

In May 1994 the £29,235 homologation-special Celica GT-Four arrived. Although the styling was new, it carried over much of its hardware from the previous-generation ST165 and ST185 Celicas. It was discontinued in the UK in 1996 but Japanese production continued until 1999, with many grey-imported. A Celica cabrio arrived in 1995, based on the GT and sharing its rear styling with a notchback sold only in Japan and the US. 250-off 25th Anniversary Edition, based on 1.8 ST, sold in 1997. 500-example SR special edition followed in 1998. Available in 1.8 or 2.0 forms with 16in Momo wheels, air-con, mesh grille plus a colour-keyed rear spoiler and sideskirts. MkVI production ended in 1999, replaced by the fwd-only MkVII.

Celicas were made to a high standard, but time has taken its toll. Even if there’s not much sign of rust there’s a good chance that the paint will have seen better days because the lacquer tends to peel; the red finish is particularly likely to be problematic. The only effective long-term solution is a complete respray, which rarely makes financial sense.

Corrosion can be a big problem, with many of these cars neglected for years. Start with the sills, wheelarches, jacking points and door bottoms; the last being the most likely to be crusty. If all of these areas are intact the chances are that the rest of the car is solid. However, any car with a sunroof may be suffering from a corroded surround thanks to the drain holes being blocked. As you’d expect, putting right any corrosion here is likely to be highly skilled and expensive.

Corrosion can fester beneath bodykits, where fitted. Prepurchase inspections are tricky because you can’t easily remove the mouldings, so look for evidence of rusty water seeping out. If you’re looking at a convertible, give the soft top a close inspection – the fabric tends to wear and the plastic rear window goes milky. The latter can usually be revived but the only fix for the former is a replacement roof, which can be sourced from the US for around £800. You’ll then need to pay for it to be fitted.

All Celicas were fitted with a four-cylinder twin-cam engine in 1.8 or 2.0-litre forms; the smaller unit is the Carina’s 7A-FE while the bigger powerplant is the 3S-GE turbocharged unit in the GTFour.

The naturally aspirated engines will easily rack up around 200,000 miles between rebuilds, but turbochargers tend to fail after 80,000 miles or so – budget up to £1000 to put things right. Less durable is the 1.8-litre unit that tends to smoke by the time 100,000 miles have been notched up, because of worn piston rings and hardened valve stem seals. Because these affect the bottom and top ends respectively, the best solution is a full rebuild at £2000 or so, although used engines can be sourced for around £500. You’ll also need to invest in a rebuild or a used engine if there’s a knocking noise, signifying that the big end bearings are past it. This can affect any Celica engine but with the GT-Four you’ll pay up to £4000 to have the motor fully overhauled, including a new turbocharger.

Regular oil changes make all the difference; every 6000 miles is ideal, or annually. Infrequent changes will accelerate engine wear but will wreck a turbocharger even faster, so look for blue exhaust smoke which betrays worn turbo bearings. Before switching off, leaving the engine ticking over a minute or two after a run will lengthen the turbo’s lifespan considerably by allowing the bearings to cool gradually.

The camshafts of all Celica engines are driven by a toothed belt which has to be replaced every 60,000 miles or six years. Budget £250 to get a new one fitted professionally.

All sixth-gen Celicas came with a five-speed manual S54 gearbox. It’s a strong transmission that tends to give problems only if it’s been abused. Eventually the synchromesh rings will wear so if the gear changes are difficult get ready to spend £800 on a rebuild, or £250 on a serviceable used ’box. Clutches are strong; replacements cost £350 fitted.

All of these Celicas had power steering and there’s a fluid cooling pipe that sits between the front bumper and the radiator; it tends to corrode; a new one is around £200. Likely to need attention within the GT-Four’s front suspension are the figure-of-eight links, so listen for clonks. There’s one on each side and they wear, but new ones are available; expect to pay around £200 for a new pair plus at least £50 a side for fitting. The anti-roll bar bushes in the rear suspension wear out after 60,000 miles, leading to clonks as the car is driven over bumps or the brakes are applied. Replacements are available from Toyota at about a fiver each, and fitting them takes just a few minutes. If any clonks are evident only at low speed it’ll be because of tired rear wheel control arms. There are four of them, two with adjusters to set the rear wheel alignment. Brace yourself for a pair of replacement arms at £80 each plus £150 fitting.

Most sixth-generation Celicas came with cloth trim but leather was available as a cost option on the GT. As always, it’s the driver’s seat bolster that wears first, especially on hide-trimmed cars. Repairs or even complete retrims are straightforward, if not necessarily cost-effective in the case of the latter, but because decent trim is now pretty much extinct on a new or used basis, patching up is what you’ll have to do.

The integral alarm and immobiliser that was fitted to all Celicas can be temperamental. Two different systems were used and fixing things can get involved; your best bet is to read the ‘alarms and locks’ section at colin99.co.uk/home_car.html

‘Good value compared not only to Quattros and Integrales, but also the Evos and Imprezas it competed against’

Three years ago, Jeff Markham bought the Celica GT-Four pictured. ‘I wanted an Audi Quattro but prices had gone crazy, so instead I bought a different four-wheel-drive turbocharged car with rally pedigree. I knew a good Celica would be reliable but finding an original UK car that hadn’t been molested wasn’t easy. So far, the car has done 168,000 miles on its original engine, which is still in excellent health. ‘There’s not much on it that you can’t tackle yourself either. It’s simple in its engineering and construction and no special tools are needed. New panel supply is pretty poor but a lot of used parts are available because these cars are still being broken for spares. Mechanical parts are cheap and easy to come by though, because they’re shared with millions of Toyota saloons.’

Malcolm is in the Celica Club and is press officer for the Toyota Enthusiasts’ Club (TEC), for which he also runs the early Celica register. He owns six Celicas, including a MkIV, MkV and MkVI. ‘I bought a Celica MkI in 1976 and have stuck with them ever since,’ he says. ‘They’re reliable, cost-effective and easy to work on.

‘The classic car market has yet to cotton on to them yet, although prices are firming up as the supply of cheap, worn-out ones dries up. Even though the GT-Four has doubled in value in the last decade or so, it still looks like good value compared not only to the likes of the Quattro and Delta Integrale, but also the Mitsubishi Lancer Evo and Subaru Impreza it competed against.’

‘Reliable and easy to work on’

Engines are robust if looked after, but turbos fail at 80k New trim largely no longer available, so perform due dilligence.

Peter McIlvenny of specialist classic car insurer Carole Nash says ‘With a six-year production period the sixth-gen Celica had a good run, and these Nineties classics are icons for many of the Gran Turismo-playing PlayStation generation. Take your time and buy the best you can afford, and don’t be put off by grey imports. Just make sure you get professional advice and know who you’re buying from. Whatever your budget, the original examples with decent service history will hold their values better moving forward and see the greatest gains in the next ten years. If the trajectories of older Celicas are anything to go by, you shouldn’t be disappointed.’

Totally standard 125,000km (77,000 mile) 1996 GT-Four imported from Japan in 2015. One owner in Japan and one in the UK. Shortly after arriving in the UK the underside was thoroughly treated with a clear wax; both the underside and original body panels remain corrosion free. Facelift car with electrically folding mirrors, twin airbags, six spoke alloys, different rear spoiler and modified ABS. Drives fantastically.