Scarabeo is the Italian word for ‘beetle’ but for a few Alfa Romeo connoisseurs, it is also the name of one of the most tantalising ‘might have been’ chapters in the marque’s history. The story of Project 105.56 began in February 1966, less than a month after Giuseppe Busso and Alfa's experimental department had begrudgingly surrendered development of the Tipo 33 sports prototype to Autodelta, Alfa’s racing division headed by Carlo Chiti.

Portello’s proud engineers, headed by the great Orazio Satta, weren’t at all happy to leave all racing car development to Chiti’s outfit – even though that’s precisely what Alfa’s president Giuseppe Luraghi had intended. Losing the 33 was a bitter pill to swallow for Busso, who hoped he could ‘get away with’ a smaller programme involving a cheaper car powered by an Alfa Romeo twincam four-cylinder engine mounted amidships. Busso started from the aluminium ‘H’ frame that he’d designed for the 33 but without the complex magnesium casting at the front.

He also chose a Giulia GTA engine mounted transversely in the centre instead of the 33’s longitudinal V8. Fitting the engine transversely made for a shorter wheelbase and placed the driver closer to the rear wheels, resulting in a remarkably compact and low-slung rolling chassis: the ideal base for a jaw-dropping show car. To reduce costs to a minimum, the GTA engine was mated to its existing gearbox, with power going to the centrally mounted differential casing through a bevel gear and a short, oblique driveshaft. 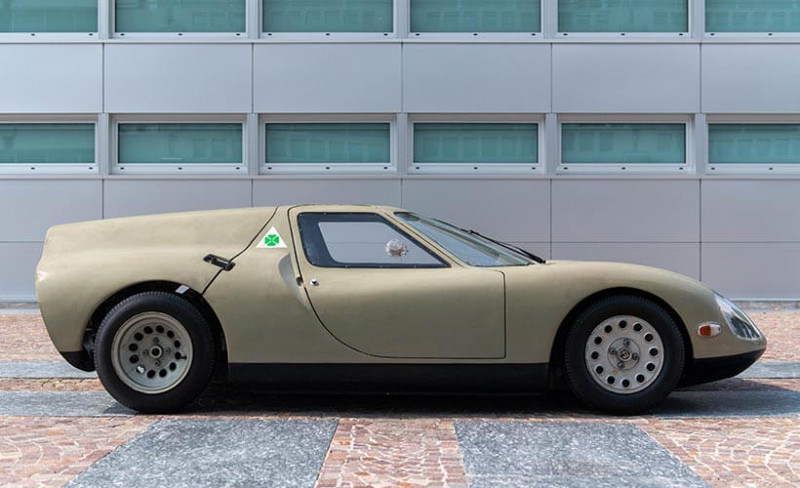 The OSI-built Scarabeo’s body was designed by Sergio Sartorelli. First exhibited at Paris and then at Turin during the autumn of 1966, the Scarabeo stirred the imagination of the critics and public alike, as well as Luraghi, who instructed Busso to build a functional prototype for testing (the show car was actually engineless).

Before the project eventually fizzled out in 1969, two Scarabeo running prototypes were constructed: the first had a rudimentary aluminium skin; the second was a complete car built by OSI with a more conventional design (pictured below) than the first show prototype (right). Both survive to this day in the Alfa Romeo Museum.

The idea of a mid-engined sports coupe made from existing Alfa components re-emerged in 1972, this time with an eye on rallying. Based on a modified Alfetta floorpan, the so-called Scarabeo II (project code 116.21) was equipped with a 2000 GTV engine mounted transversely amidships. The only thing it shared with the original Scarabeos was the weird bevel gear and oblique driveshaft arrangement, which allowed the use of the standard Giulia gearbox. With no resources available for a bespoke design, the new prototype featured a modified Junior Zagato body with a sizeable roof-mounted air intake (pictured right).

Just like the original Scarabeo, though, the project had already lost what little momentum it had by the time it hit Balocco's tarmac in 1974. Sadly, it was a victim of poor timing and Alfa's shifting priorities.