Every generation has its ‘least-loved Lotus’, that oddball that leaves a pocket-moneysized way into the marque. But as the big Seventies GTs attract full restorations and Elise prices firm up, everyone’s forgotten about the radical front-driven Elan M100. It may have an unorthodox layout for a Hethel car, but it outhandles hot hatches, delivers near-supercar oomph, and is far more practical to live with than any Lotus since. Nowadays it’s possible to find them for sale for less than £5k – but should you buy one like this? To guide us towards a good one, we enlisted the services of long-term Lotus dealer Paul Matty, Steve Roberts of Lotus restoration specialist SJ Sportscars, and Paul Clugston of UK Sports Cars. 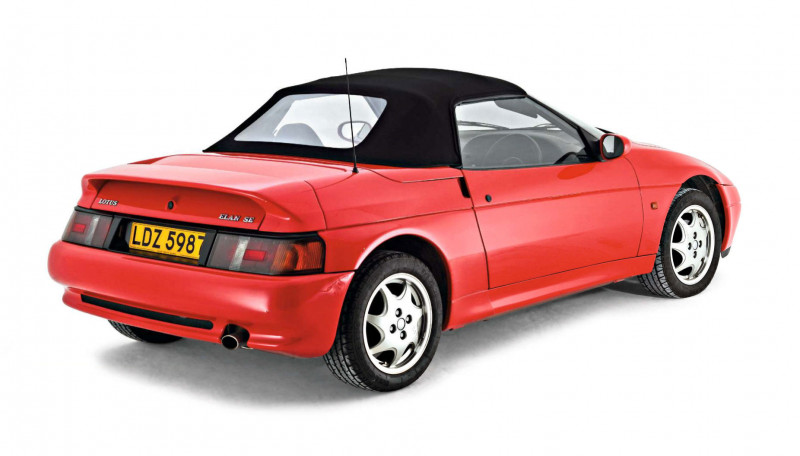 The Lotus Elan M100 was launched in late 1989 in standard normally-aspirated and turbocharged SE guises. Very early cars feature a bizarre ‘opera glasses’ headlight arrangement, with the lamps hinging forward Porsche 928-style, pushing up the broad headlight lids. This was soon altered to a more conventional system after less than a year. Although less expensive, only 129 examples of the normally-aspirated car were built, compared to 3726 SEs, before production ended in 1992. US-market cars had longer bumpers and an airbag-equipped steering wheel.

Elan production was initially curtailed by a combination of recession, engine manufacturer Isuzu discontinuing the Elan’s power unit, and Lotus’s sale to Romano Artioli. However, as the new Artioli regime took over, 800 unallocated engine/transmission units were found at Hethel, so the Elan was put back into production in 1994 as the S2, in turbocharged form only and with firmer suspension. Sales continued until 1995 and the launch of the new Elise.

After Lotus sold its last Elan S2, the project was sold to Kia in South Korea, where the cars were built and fitted with 1.8-litre normally-aspirated Kia engines. Produced from 1996-1999, 1056 were built.

While the Elan’s chassis wasn’t galvanised, it did get a Dinitrol treatment, something which should have been included in an annual service. Without regular rustproofing, corrosion breaks out – especially at the rear of the chassis. Replacements are unavailable and the work required to put a rotten chassis right will easily exceed the value of the car. The wishbones also rot – replacements for the front are £400 per pair and rears are £600 apiece plus nearly £200 per corner to fit. The glassfibre bodyshell has so far proved durable.

Until the Elan arrived, most Lotuses were built in two halves (upper and lower sections), but this car changed all that. There are 63 different composite panels, with a further 17 used for versions of the car sold in non-UK markets. The outer panels at the front are bolted on, those at the rear are glued together. Because they’re not load-bearing they’re a mere 2mm thick – although most of the panels such as the door casings, bumpers and bulkheads are much thicker. There’s little chance of cracking or crazing, and apart from stone chips on the nose you’re unlikely to encounter anything worth worrying about. One note of caution, though: if you’re looking at a car finished in red and the colour has faded, the only long-lasting solution is a complete respray, something costing around £9500 – and make sure the specialist doing it knows how to spray the Elan’s combination of glassfibre and plastic bodywork.

The 1588cc Isuzu 4XE1-MT engine is compact, light, powerful and durable. A thoroughly modern powerplant (for a classic), it will keep going as long as it’s properly serviced. The key is fresh fully synthetic oil every 5000 miles. The cambelt does wear out – it’s generally recommended that it’s replaced every 50,000 miles or six years. If the belt breaks and valves hit pistons, a rebuild will be required – or an exchange engine that will set you back at least £2000.

The IHI turbocharger lasts as long as the engine if the oil is changed frequently; its lifespan will be increased significantly if the engine is allowed to idle for a few minutes before being turned off to let the turbocharger and its bearings cool down more evenly. If it fails, replacing it is an involved job that will swallow £1200. There’s just one weak spot with the powerplant – the cam angle sensor. This fails, causing the fuel injection system to malfunction. Sometimes the engine warning light illuminates when this happens, but not always – it’s not a disaster though; a new sensor is just £150 and fitting it is less than an hour’s labour.

The steel exhausts fitted to the cars are rot-prone. Stainless steel replacements are available for £450.

Because it’s so strong, there’s little chance of the five-speed manual transmission giving problems, even if the engine has been upgraded. Hard-driven cars may be suffering from a slipping clutch, but you simply need to feel for slipping as you accelerate hard through the gears; also check that the clutch doesn’t reach its biting point towards the top of the pedal travel.

The gear linkage isn’t so tough. The ball link on the end of the cable will break away, leading to difficulty selecting some of the gears. This means you’ll still be able to drive the car, you just won’t have all five ratios. Fixing the broken linkage is cheap and easy, though.

Steering racks have proven to be weak; with many being replaced. Fitting a new one is a hassle which will cost you £318 on an exchange basis. The Elan’s suspension is as tough as the rest of the car, although the dampers can leak – a swift visual check will soon establish whether replacements are due or not. If one is leaking or worn out, both sides will need to be replaced; non-adjustable front dampers are £250 per pair, while adjustable rear dampers are £165 each.

There are a multitude of suspension bushes that can perish, but unless the car has been mistreated or driven really hard, it’s unlikely that you’ll need to get your wallet out. If any new bits are needed, they’re easily available off the shelf. Of more concern is suspension that’s out of alignment – this is guaranteed to lead to wayward handling and uneven tyre wear. It may be because the car has been in a shunt, but more likely is simply because of some heavy kerbing.

Series I Elans were fitted with 15-inch alloys, although American cars got 16-inch wheels instead, with all the wheels made by OZ and featuring seven spokes. Made of soft alloy, those original wheels haven’t aged well and they’re now obsolete, which is why many Elans sport aftermarket replacements.

There are no worries with the Elan’s braking system, because it’s completely conventional. However, the front brakes could be stronger, so some owners fit grooved discs and harder pads, although a four-piston conversion is available for £1400. Whatever is fitted, the rear discs can corrode if the car is stored outside.

Expect plenty of rattles from the interior trim – but most owners learn to live with it. Something that’s much harder to sort is a damaged roof. They’re strong, so only likely to need replacing if vandals have struck. However, the folding roofs never effectively sealed the cabin from the elements, so don’t expect any hood to be completely watertight – although Series II cars were better. Expect to pay £550 for a new roof and up to another £400 for a set of seals.

Electrics can be temperamental and things aren’t helped by that plastic body. The Elan’s electrical problems aren’t just down to poor earths though – motors for the windows and headlamps play up. Replacement parts are affordable, but it will be an expensive fix if you have to call in the professionals – some repairs are very time consuming. Check that things like the windows, central locking and flip-up headlights are functioning correctly. A common interior fault is a sagging driver’s seat, but it’s easy to fix. All you need to do is buy some fresh clips to hold the base cushion in place and turn the cushion over.

‘Running costs are on a par with a Vauxhall Astra

Isuzu-built 1588cc engine, is powerful and durable in normally-aspirated or (more common) turbocharged form The M100’s composite body won’t rust – but the chassis underneath will if it isn’t protected.

An interior with rattly trim is all part of the territory with M100 ownership. Water-tight roofs are a rarity too – and expensive to replace if vandalized. A front-drive Lotus may be anathema, but the M100 handles well enough to live up to the badge.

‘It outhandles hot hatches, delivers near-supercar oomph, and is far more practical to live with than any Lotus built since’

‘I’m Norfolk born and bred, so my dream was always to own a Lotus,’ says Andy Barber, who bought his 1992 SE in 2013 and used it as his wedding car. ‘The majority of components are General Motors, so it’s a good idea if you need to replace anything to check the part number to see if it has a GM stamp on it, and see if a Vauxhall specialist has one – a Lotus dealer will charge a lot more. Bespoke Lotus bits like the roof are hard to get hold of and don’t fit well – most Elan owners carry towels with them if it rains.

‘But other than the roof, they’re bulletproof. The engine is the most reliable unit ever fitted to a Lotus. That said, the brakes aren’t brilliant, and are marginal at every MoT. Pop-up headlights are notorious for jamming open or closed, but it’s usually degraded nylon bushes at £25 each. ‘I have mine serviced ever year at a Lotus specialist, but running costs are on a par with a Vauxhall Astra. There tend to be two types of M100 owner – daily and weekend. The daily drivers are more likely to suffer chassis and suspension corrosion; weekend cars tend to be garaged. Mine is Waxoyled every year and I’ve had no problems.’

Nick has owned his Elan for 13 years, although he admits he went about buying it the wrong way. ‘I got one in very poor condition; I was just excited that I could afford one, but after taking it for its first service I realised how much work needed doing,’ he says. ‘Both front and rear wishbones were corroded, but luckily I got a used set very cheap, taken off a car in Italy. The brakes needed refurbishing, which cost £600. New coolant hoses and an aluminium radiator was another £600. The heater valve always goes, but you can get them from Lotus Elan Central club group for £20. I’ve had to replace the plug leads and coil packs a few times now – a common occurrence resulting in a misfire.

‘I’ve recently had it resprayed for the third time. Not everyone knows how to deal with the Elan’s combination of plastic and glassfibre panels, and the final respray ended up being £9500-worth.

‘Watch the weather seals. These were the first things Lotus applied to the structure when building it, so if they need replacing they need a full stripdown. But once the you get it sorted, these cars make a fantastic practical classics. I commute to work in mine in summer, and the boot will swallow a whole camping trip.’

Peter McIlvenny of specialist classic car insurer Carole Nash says, ‘As Lotuses go, the M100 Elan is still a little unloved as a classic and as a Lotus. This is mainly because of its front-wheel drive set up.

But this is a tough little car that will give you plenty of smiles if basic servicing is carried out when it’s due. Values are still pretty low for a Lotus, with project cars around £3750, but if you are looking for a Series 2 minter you’ll be looking up to £13k. ‘That said, a mid-priced car at around £8-9k should give you plenty of fun and a decent return on your investment over the next ten years as we see these cars start to become more appreciated for what they are.’

lotus elan m100lotus elanlotus
—
116
Write a comment
No comments yet. Be the first to add a comment!