For Those About to Rock… …we salute your superior motoring choices. For David Gowar, it’s been a symphonic E30 Baur love affair for thirty years and counting – his 300,000- mile unrestored example is still going strong.

The link between rock stars and cool cars was established by the cosmos long ago. It's an indelible truth of human nature I that if you're particularly adept at howling, shredding, thudding or noodling, there'll be a lobe in your brain specifically devoted to ensuring that you've got something interesting parked on the driveway. KeithRichards had his Bentley Continental, BillyGibbons had his CadZZilla, Ginger Baker had his Jensen FF. Ever it was, ever it shall be so. 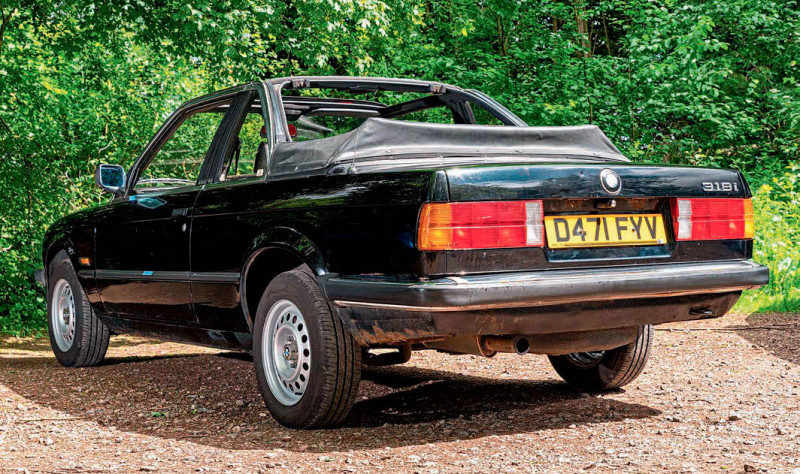 For David Go war, guitarist of the old-school and general musical polymath, it was always written in the stars that he'd end up with some fairly entertaining machinery at his beck and call. And as we probe him for the back story, it proves to be even more unusual than we'd imagined. «My first car was a Mk2 Ford Zephyr, which I won in a poker game in 1973,» he grins. «That was followed by aFord Anglia van, which cost me £50 from a pig farmer who had used it to transport his pigs — it took me a week to clean it out! Then came a Fiat 124S which went like the clappers but fell apart with rust, followed by a Triumph Dolomite that blew up, and then a Mk2 Ford Transit – which remained my only vehicle until February 1992, when I received my first significant music royalties and went and bought Boris the Baur, who I found at Lincoln Street Motors in Birmingham.”

This was an interesting time in David’s life, the royalties in question having been from his band, Sindy and the Action Men, and their pan-European hit ‘You’re So Lucky’. “We toured Holland, and were on the Dutch equivalent of Top of the Pops and had our video for ‘You’re so Lucky’ on Dutch and French TV – it also made No.3 in the UK Independent Chart,” he recalls. “Our lead singer dressed as Sindy and we took it in turns to be different Action Men when we played live – the frogman was the most difficult for playing in… We also toured the US airbases in the UK along with The Waves (later to become Katrina and The Waves); after the band split I became a music lecturer while still playing guitar, singing and writing.” 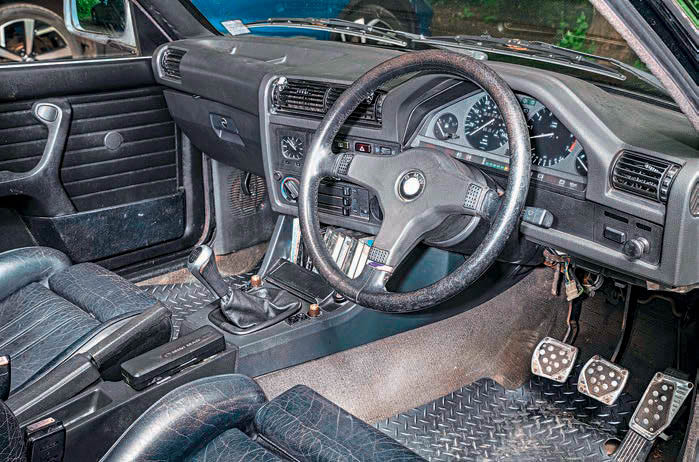 With the frogman lucre rolling in, David was keen to find an appropriately rock ‘n’ roll means of locomotion, and when he spotted this E30 it was clearly just meant to be. “I loved him at first sight,” he beams, “especially the roof and all the chrome. And he was a one-owner car with 52k on the clock — a steal for £7.5k, I thought… and the first car I’d ever bought solely with the proceeds of music, which is why he’s held such sentimental value for me. He also started my love affair with BMWs – I have only bought other BMWs since then. Apart from the DeLorean, of course...”

Well, naturally. With a rock star in the eighties there was bound to be a DeLorean at some point. But this E30 Baur, there was clearly something about it that immediately held David in its thrall; not just the nature of it being the first automotive manifestation of musical success, but the fact that he evidently really likes having it around. So what exactly is an E30 Baur? Well, in essence, it’s a solution to a problem which turned out to be slightly too good. You see, the convertible version of the E30 generation 3 Series, which has become ubiquitous in retro motoring lore, was never actually originally intended to exist. When the E30 launched as a range of saloons and estates in 1982, the drop-top wasn’t in the picture. However, knowing that there would be a niche demand for a soft-top, as evidenced by the limited-run open-top E21s, BMW commissioned Karrosserie Baur to develop one as an option, replacing the main roofskin with canvas. They did a cracking job, and when it became apparent that an open E30 was something the public really wanted, BMW’s engineers unleashed the tin-openers in a flash and crafted something that was elegant and sophisticated, a full convertible… something that positively flew off the forecourts and cemented itself in the annals of BMW history. Of course, a full factory convertible and a Baur convertible are very different things, and to a hardcore cult of enthusiasts, the Baur will always be the original and best open E30. You might hear it referred to as a TC2, as the old Baur E21 had been badged as a TC (standing for Top Cabriolet), and it was held in such high regard by connoisseurs that BMW allowed it to remain as a special-order coachbuilt option right through the lifespan of the E30, alongside its own factory-built efforts. 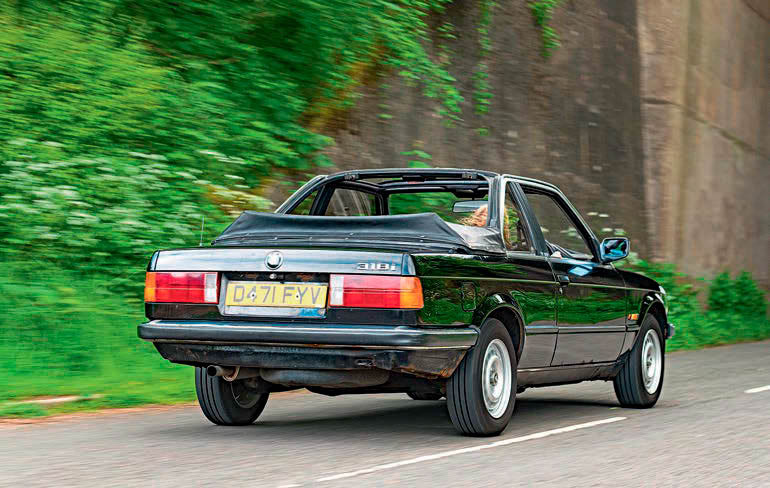 Baur’s quality design sought to offer a versatile roof format; with fixed pillars and rails, the fabric section of the roof could be split into two parts, with the front section removable to create a targa. (Although Porsche owned the copyright to the term, so Baur/BMW couldn’t call it that.) The rear section could be separately removed to create a landau roof, or both sections could come out to create a full- length cabriolet. Naturally this was a far more complicated endeavour than simply taking an angle-grinder to the lid, and a whole lot of shell strengthening was necessary to retain BMW’s factory levels of safety and refinement. To achieve this, Baur developed a sort of cage setup, the frame of which added additional reinforcement to the roof gutters and C-pillars, with lateral bracing across the boot and the roll bar between the B-pillars. 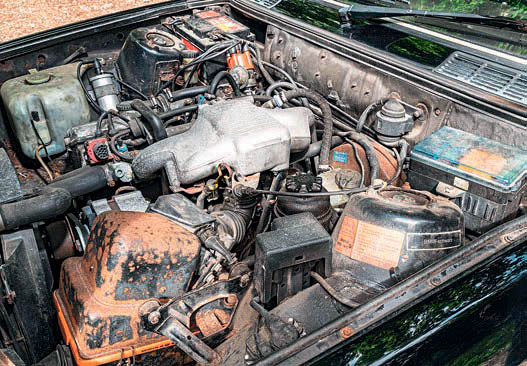 A solidly built and robust machine, then. And the eagle-eyed may have taken a closer peek at the photos of the dash, and spotted some pretty big numbers there; at the time of our shoot, the E30 had covered an impressive 291,440 miles, and this is a figure that keeps rising as the car’s still in regular use after all this time. And if you’d been wondering about the patination of the seats, the rusted number plate screws, the surface corrosion at the rear and the swirl marks in the paint, well, that’s all part of the history. This isn’t a show car, it’s not a pampered concours toy, it’s a car that’s been properly driven throughout its life and continues to do so. As it closes in on 300k miles, there are still so many adventures to enjoy (and so many trips to the shops, and errands to run). Every perceived blemish is a part of the BMW’s vibrant and vivid story.

“Boris was named by my eldest daughter, Becca, when she was six – Boris Becca, geddit?,” David laughs. “He has been my main car for most of the 30-years I’ve owned him. I went slightly mad between 1994 and 1999 and had two other Schwarz E30 Baurs – a 325i and a 320i. The 325i was quick but drank petrol; the 320i just drank petrol… I also had the DeLorean and a Ford Econoline Day Van, but Boris was my daily drive. He was regularly maintained by Radford Bavarian (now Knights) in Stafford, and they really went above and beyond – including respraying the wheels for free when he went in for a service! I have all the receipts since 1992, and he has cost me on average £950 a year, which includes tyres, MoTs, the lot.” These cars really were built solid, casually munching away the stratospheric miles with little beyond routine maintenance to keep things on track. Naturally there have been a few bigger jobs along the way, but that’s just what you’d expect over the course of several decades. 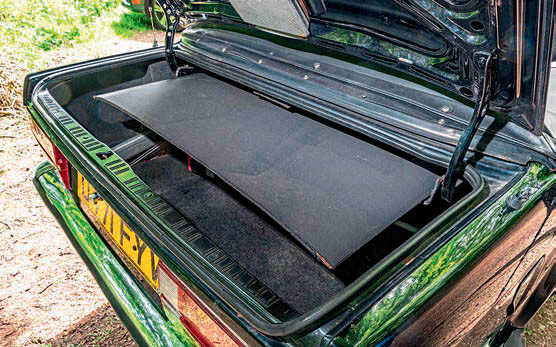 “At 285,000-miles the gearbox went, leaving me a choice between second and reverse,” David continues, “so I put him in the garage for a while. He stayed there longer than anticipated as I was going through an acrimonious divorce, and when he emerged all his rubber pipes had been eaten by rats… I had him trailered to Big Bavarian Beauties in Essex and they put in a replacement gearbox, fuel tank, and various other bits and pieces. In the meantime, I got myself an E46 320Cd convertible, but sold that before it got too expensive. I also had to find a replacement fusebox for Boris; I couldn’t have the stereo and the electric windows working at the same time without blowing fuses – but I found one on eBay for £50. I also found a replacement ECU for £25, and wheel centres for another £25, and the Rocket Launcher and Ejector Seat switches which I have installed with a Marshall amplifier rotary knob.” 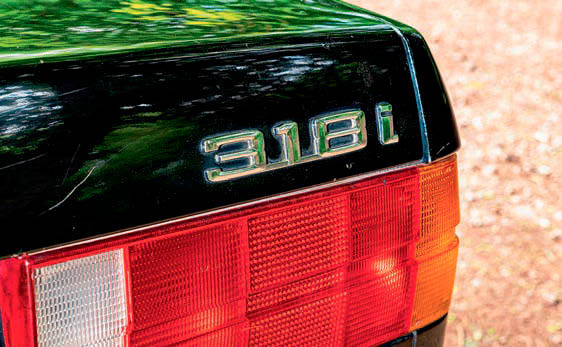 As Boris continues to be a daily driver through an era when E30s are becoming more and more sought after as classics, David finds himself beset by eager passers-by offering to buy it for sizeable sums of cash – but they’re wasting their time, of course, as this car has never been speculation. It’s about passion, achievement, risk and reward; it’s the car David bought with his first proper music royalties, and the sentimental attachment means that he’ll never, ever sell it. Besides, he’s still having too much fun driving it. “My son Lucas, who is now 22, is going to have Boris when I am summoned to the Highway to Hell,” says David. “He is threatening to have him wrapped, but I’ve told him I will harass him mercilessly from below if he does! My local garage, Venture Garage in Rubery, has taken over looking after Boris and are doing a great job. I’m still playing music and using the Baur for gigs – I can fit all my equipment in his boot and still fit the targa top in!” 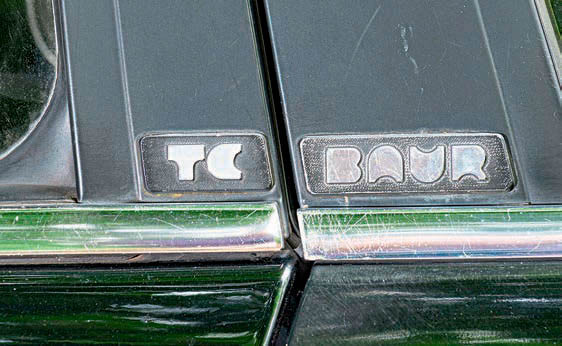 That’s always been the vibe from time immemorial, rock stars and cool cars in harmony. And that sums up David’s story here. 318i is the number of the beast and it’s an axis bold as love – and at an average of just £950 per year, these dirty deeds are getting done dirt cheap. It’s a veritable beggar’s banquet of technical ecstasy. 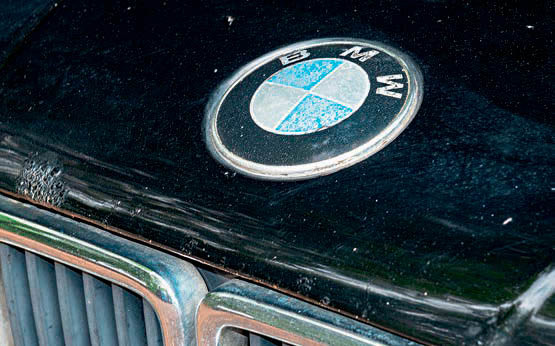 This isn’t a show car, it’s not a pampered concours toy, it’s a car that’s been properly driven...

As the Baur TC2 was offered as a special-order body style rather than an off-the-shelf model, it could be applied to any specification within the E30 range, from the humble 316 right up to the venerable M3.