Hoping to persuade police forces across the UK that the XJ-S could be a high-speed response vehicle, a single demonstrator was developed. It’s fresh out of restoration and we’ve driven it.

LINE OF BEAUTY — ON PATROL IN THE XJ-S

We go on patrol in the car Jaguar once hoped the nation’s police forces would adopt for high-speed pursuit work.

There are many words that describe the XJ-S; fast, handsome and controversial are just three. But with the car’s unique design having as much aggression as a quiet country pub on a Saturday night, the one thing it could never be called is scary. 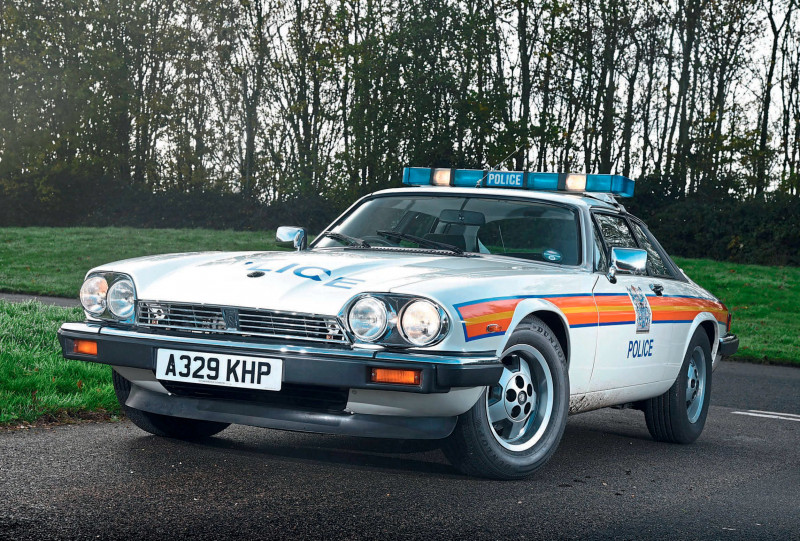 If Jaguar got its way, though, 40 years ago the car could have become as terrifying a rear-view mirror sight as the BMW X5 and Volvo V90 are today. During the mid-Eighties it planned to supply the then new 3.6-litre model to police constabularies as a high-speed response vehicle, even going as far as producing a demonstrator. 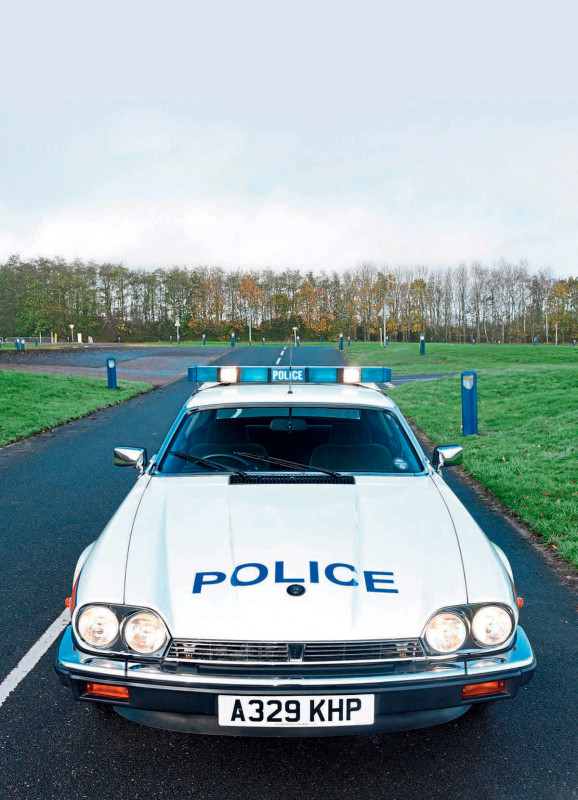 Despite seeing plenty of action while being trialled by forces across the country, the car was amazingly preserved and has recently been restored.

Jaguar was no stranger to supplying cars to the police, its saloons especially. Ever since the MkV in the 1940s, British constabularies had found their high performance ideal for patrolling the streets. This was especially true in the Sixties when the fast and agile compact Mk2 was perfect for chasing bank robbers while a decade later, the XJ6 was a common sight on the UK’s growing motorway network.

All this experience meant Jaguar understood what the police needed. 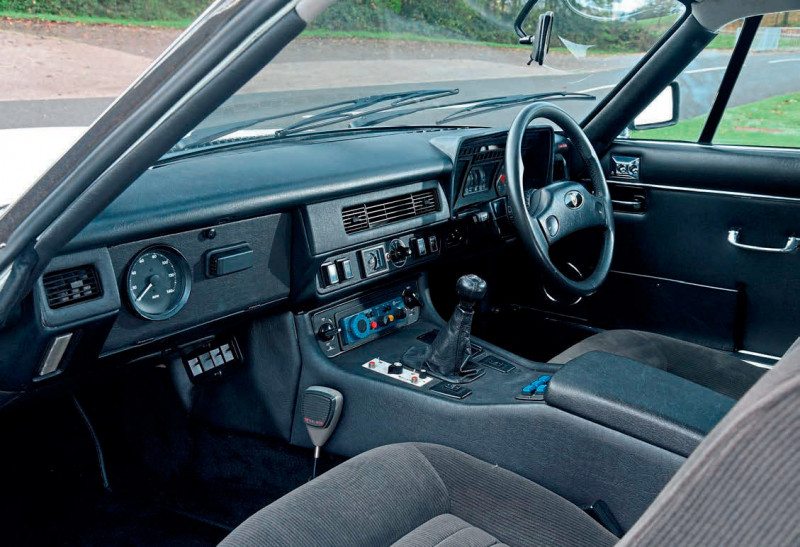 So when the new 3.6-litre AJ6 engine became available with the XJ-S in 1983, the company’s sales department reckoned the car would make a perfect high-speed pursuit vehicle.

Admittedly, it was very different from the large four-seat saloons it had traditionally supplied but the idea wasn’t without virtue. During the Fifties and Sixties several British constabularies had used a variety of MGs for the same reason while police in Germany and France favoured Porsche and Alpine-Renault respectively.

It was also good publicity as retired chief superintendent for Warwickshire constabulary, Mark Jones, explained during a recent Jaguar Enthusiasts’ Club podcast about police cars. “Historically, for a lot of manufacturers, if the police were using their vehicles it says a lot about reliability.” 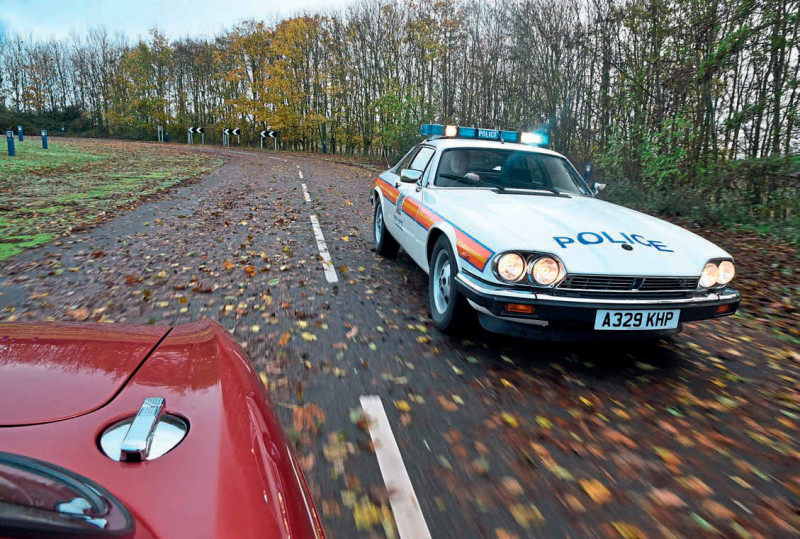 Although the 3.6 and 5.3 had similar performance figures, both reaching 60mph in a little over seven seconds, the straight six was considered the better candidate since it offered more flexibility of the two especially when married to the five-speed Getrag box which wasn’t an option with the V12. “The AJ6 engine does feel potent,” said Motor when it tested such a car for its March 3, 1983 issue. “Despite the rather low 5800rpm redline, mid-to-upper range punch is such that constant cog-swapping isn’t a prerequisite for brisk progress.”

In 1984, an XJ-S 3.6 manual was sent to Jaguar’s Special Vehicle Operations, the secret department located at the Browns Lane assembly plant that was in charge of low volume cars – such as the Daimler DS420 limousine and prototypes like this. Registered on 22 December, 1983, the car was a very early example and had previously been used as a company demonstrator. 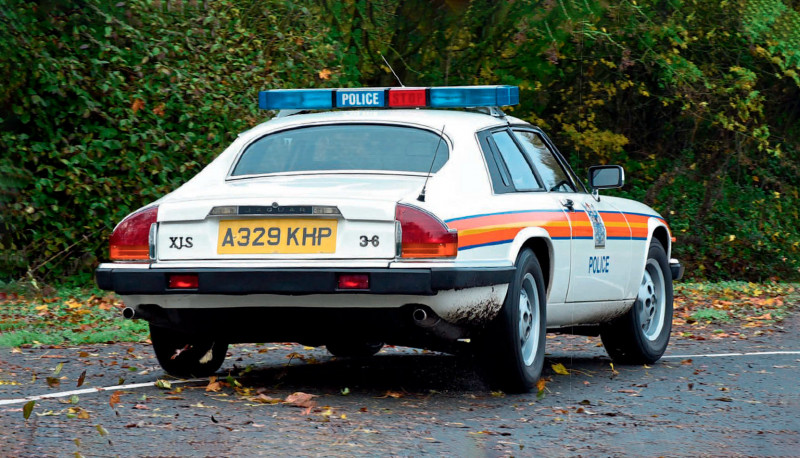 SVO gave the XJ-S a full Police Special specification which included a new style of light bar that was becoming more common at the time, featuring strobe and spot lights plus a stop sign. It was then dressed in a full police livery although this changed depending on the constabulary that was using it at the time. Together with sirens and a radio plus the carpets and veneer replaced with rubber and vinyl, it was ready for work.

It’s not known exactly how many or which constabularies trialled the car but by all accounts those who drove it enjoyed the experience. As Mark Jones – who was one of the first to drive the XJ-S during its trial period with the Warwickshire constabulary – said during the JEC podcast, “Many traffic officers have a picture of the car in their album.”

Livery is currently that of the 1980s Met. Original police fittings were tricky to get right during the restoration but cloth seats were original spec.

Yet the XJ-S had a more serious side since according to Mark, its image and obvious performance stopped any would be miscreants from speeding. “You cannot believe the amount of double takes we’d get if we were either sat on an observation platform or in lane one,” he recalled. “They really didn’t want to take us on.”

Despite its many advantages, not one police force ordered an XJ-S due to one massive disadvantage: the lack of interior space. “It was never going to be a viable police enforcement car,” admits Mark. “Trying to get a prisoner in the back of one would have been quite problematic.” Plus, with highway patrol cars needing to carry more and more equipment, the XJ-S’s 310-litre boot couldn’t compare with that of the Range Rover or new generation of large estates the police were starting to favour.

When the trials were finished in the mid-Eighties, the XJ-S was handed over the Jaguar Daimler Heritage Trust for preservation. As a unique curiosity, the car remains a popular addition to the JDHT’s extensive collection of important cars, with many surprised by its existence. It’s also famous, with several toy manufacturers – including Corgi in the Eighties and more recently slot car specialist, Scalextric – producing scale models of it.

Yet despite the car’s ‘retirement’, it’s still a hardworking exhibit, regularly taken by the JDHT to events across the country. In 2021 it was clear the almost fourdecade old Jaguar was in poor shape with the JDHT’s Tony Merrygold telling me the floors were rusted through due to leaking. After the decision was taken to restore the car, JDHT’s band of trusted and enthusiastic volunteers stripped the interior and removed the police equipment.

It was then sent to marque specialist, XK Engineering located outside Coventry, where new panels and door seals were fitted before it was given a fresh coat of white paint. The 3.6-litre engine, though, needed little attention.

The volunteers then rebuilt the car, finding the comparatively ancient police equipment tricky to get right. When it came to the livery, instead of the more modern fluorescent stripe that had been added later, Tony choose that of the Metropolitan Police from the Eighties thinking of all the constabularies that no doubt used the XJ-S, it was the most iconic. Consisting of the force’s crest on the doors plus red and yellow stripes with a blue border, Tony managed to find an original via a police vehicle club which was then copied and made into a transfer.

When I spot the newly-finished car parked outside the JDHT’s Collection’s Centre at the British Motor Museum near Gaydon, it certainly looks the part. It might be a unique police car but the classic ‘jam sandwich’ livery still gives me the shivers.

Together with the roof-wide light bar that gives the XJ-S more of a muscular image, it makes the usually friendly-looking Jaguar not one you want to mess with. Press photographs from when it was new show the car having the standard XJ-S headlights. At some point in its history – and again, there’s no record of when or who by – they were swapped for the quad American specification units it currently has.

The wood veneer that was introduced with the XJ-S around the same time as the 3.6-litre engine has been replaced with harder wearing vinyl, which makes the car less cosy than a police cell. Although the dial pack is standard, on either side of the ventilation controls is a radio that looks so old-fashioned Dixon of Dock Green might have used it. To the left of the gear lever are the switches for the sirens which – after giving myself a heart attack – I quickly discover are fully functioning and deafeningly loud. At the rear of the ‘ski slope’ centre console are two rows of blue buttons for the light bar which I obviously switch on to appease my inner child.

Finally, to the far left of the dash is a large, easy-to-read circular speedo. Common in police cars of the era, it was so the passenger knew the speed of the vehicle during a pursuit. “Police traffic cars used to be one of the only methods for speed enforcement,” explained Jones. “In order to prove the case, you had to have collaboration, usually between two officers.” 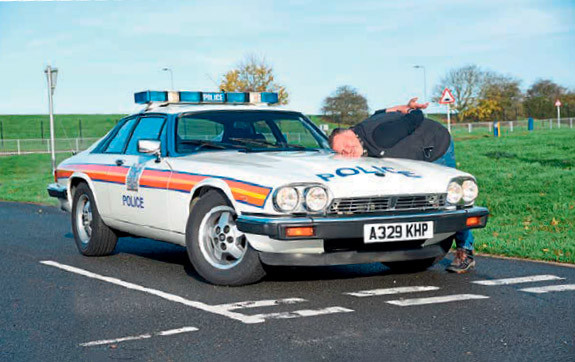 The long arm of the law finally catches up with our man Walton.

When I check the odometer in the binnacle, I’m surprised to discover it’s a little over 96,000. Considering not one police force was interested in ordering an example, they obviously liked the car enough to put some serious miles on it. Although mechanically standard, like all 3.6 litres with a manual box, the performance is surprisingly sprightly for a car that even without the extra police equipment weighs 1651kg.

When I floor the pedal, the big car accelerates hard, a surprisingly meaty growl emanating from under the bonnet. This performance is more than aided by the five-speed gearbox. Although the throws between each gear are longer than the bonnet, the transmission is also accurate, slotting onto position as smoothly as a pair of well-oiled handcuffs.

Where the car fails as a true high pursuit vehicle, though, is the handling. Admittedly it would have spent the majority of its time on long, straight motorways but with an abundance of body roll mixed with the rear constantly wanting to step out on the wet, greasy conditions of this autumnal day, it would have been something of a handful for chasing down the crims. The XJ-S’s later Sport Pack with its tauter suspension would have potentially sorted this but the police project had long been abandoned by the time it became standard-fit from September 1987.

Although it ultimately came to nothing, the idea of transforming an XJ-S into a police car is a fascinating one and is further proof of the model’s capabilities. Plus, based on the amount of drivers who still slowed after seeing me driving the 40-yearold car, for those with a guilty conscience at least, this one really can be called scary.