Phil Moore may be ‘just an average dude who likes cars’ but, as this Soul Red widebody E46 demonstrates, his modifying prowess is anything but average… Words Daniel Bevis. Photography Dan Sherwood. 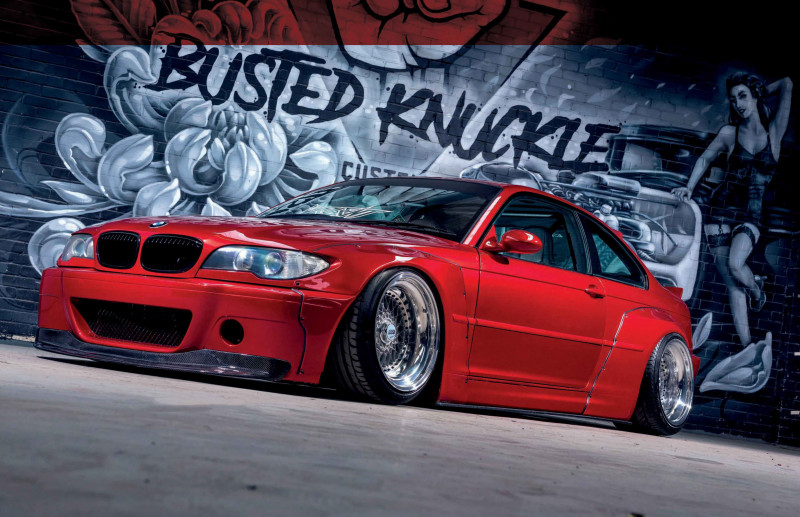 There’s a lot of posturing and peacocking on the show car scene. It’s natural, it goes with the territory – after all, every one of us approaches this hobby from different directions, and we all have different hopes, styles, methods and aspirations; some are interested in out-and-out speed, others prefer a pristine finish, some chase the latest fashion-forward mods, and there will always be people who root the whole thing in nostalgia and sepia-tinted yearning. It stands to reason that a certain percentage of those who build cars specifically to be show-stoppers will have an extrovert nature to their character, it’s all part of the recipe. But it truly is refreshing to speak to somebody like Phil Moore, who’s fortunate enough to own the startlingly excellent Pandem E46 you see before you. He’s not concerned with being Insta-famous or winning all the trophies, he’s simply a fella with a perfectionist eye who knows what he likes. “I’m just an average dude who likes cars – fast ones, slow ones, wide ones, low ones,” he says. And we can all appreciate that.

When he embarked upon this project, then, it wasn’t with one eye on a mag feature or an inner-circle slot at any show you care to mention – it was all based on the fact that he liked E46s, he liked wide cars, and he felt like smooshing those two ideas together. “I had the vision in my head from the start, and this has come out pretty much exactly like I imagined,” he says. Which is just the sort of pleasing result you can hope for when you take your time and follow a methodical line, as he has done. It helps, of course, that Phil has a little form in this area.

Indeed, he’s been modding from day one: his first car was a Renault Clio, which ended up decked on coilovers with some green neons providing that eerie Hulk upskirt, before moving on to a Mk5 Golf that he shod with OZ Futura splits, kitted out with a Mk7 GTD interior, and dropped into the weeds on Air Lift Performance suspension. From this point onward, bags became something of a theme; Phil’s next beau was an E36 328i cabriolet which he also bagged with Air Lift hardware, and treated to so many piquant custom mods that it earned a feature in our sister mag Performance BMW back in 2019.

The E36 certainly gave him a taste for BMWs; nowadays he’s daily-driving an F80 M3, but he was itching for another project to get his teeth into, and this particular Beemer came up at just the right time. Underneath the glitz and glamour, this car actually started life as a 325Ci, and that 2.5-litre M54 is still lurking beneath the bonnet today. 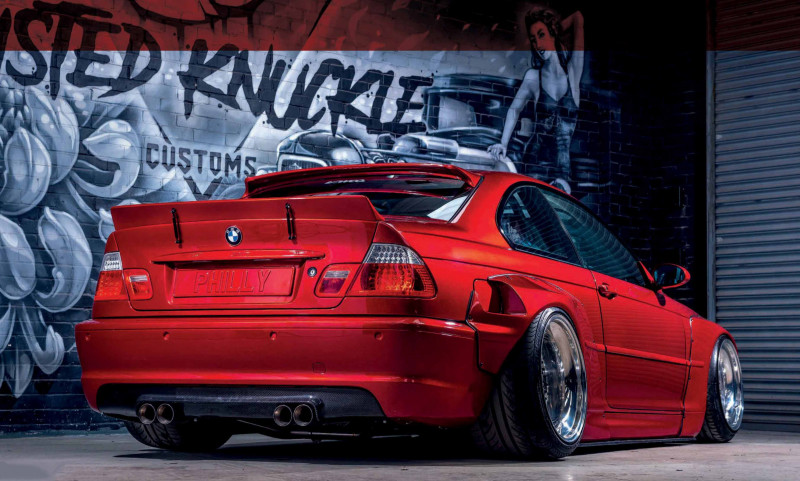 “Unlike a lot of people in the scene, I don’t really build cars to go fast,” he shrugs, “and on the occasions I do get to drive them, I like to cruise around and relax. I always like to look back at a car and have the thought in my head of, ‘Yeah, that looks awesome’. Obviously it needs to run well, but I’ve never been too concerned about going really fast everywhere.”

Perhaps an unusual statement for an F80 M3 owner to come out with, but it’s an approach that actually makes a lot of sense. If the daily-driver is the hysterical horsepower freak, then the project car can have more of a focus on the details, and that’s precisely the path he’s followed here. And as we’ve already learned, Phil knew where he was headed with this one, right from the get-go.

“I’d always liked the idea of building a widebody car, and when this particular E46 came up for sale in October 2019, I just had to have it,” he recalls. “Especially as I knew the previous owner and the car’s life beforehand. I was a big fan of the Pandem kits on the E46s and was really keen to build one. This 325Ci had previously been a show car, although when I bought it, it came completely standard other than the air-ride. I think I paid around £2,500 for it.”

A great little blank canvas then, and the plans were bubbling up rapidly for how to progress through the project. Keen to get cracking right away, Phil ordered the Pandem widebody kit in the blink of an eye; while he was waiting for that magnificent jigsaw puzzle of parts to be squeezed through the letterbox by his baffled postie, he grabbed himself some Recaro Sportster CS seats, and these were the first of the upgrades to be fitted. Not a bad starting point, right?

When the collection of Rocket Bunny-branded boxes arrived, the car was handed to Frank at The Drop Shop to have the wideboy kit expertly fitted, and of course those massive arches needed something fat to fill them. “I actually bought these BBS wheels from Frank, when I was about five seconds away from ordering a set from Norway,” Phil says. “These then went off to Dan at Wheel Unique to be refinished, so we could get them back and fitted to ensure everything would fi t and the kit was OK before final welding.”

The finish of the wheels is supremely detailed, with the RS 16s being stepped up to 18in in staggered widths (10.5in-wide at the front, a girthsome 12.5in out back), and they’re packing custom bubble lips as well as centres that are powder-coated in metallic silver with a smoked clearcoat, genuine BBS Design Line caps, polished hex centres, polished hardware, and polished valve caps. Fair to say that Phil’s into his wheels – and he’s also a details man. The brief he gave to Dan mirrors the obsession with detail found throughout the build. And with the E46 sitting pretty over its new rolling stock, the mods started coming thick and fast.

“After the car was back on the ground, along came the custom exhaust, rollcage, rear lights, steering wheel, carbon sideskirt extensions… all the fluffy stuff,” says Phil. “This was all done at the start of 2020 and was finished just as Covid hit.” Yep, it’s a story we’re hearing time and time again from people across the scene – we were all blindsided by the sudden rush of the virus, and it took a little while to tiptoe our way through. But soon enough Phil found his path again and, fast-forwarding to June 2021, the Pandem E46 was down at Busted Knuckle Customs for a full repaint. The colour choice is absolutely killer, with Phil opting for Mazda’s Soul Red Crystal [see boxout on previous spread], and the fresh new look has fully revivified the BMW for the 2021 show season.

Don’t go thinking it’s finished, though. For someone with Phil’s eye for perfection, there’s always something else on the to-do list. “There’s one thing that bugs me, and that’s the fact the arch line of the Pandem kit is higher than the standard arch line,” he muses. “Therefore, when I originally had the idea of doing the car I wanted a really flush arch-to- lip fitment; however, the wheels bottom out on the tubs so it would take a brave man with an angle grinder to get it much lower! But that doesn’t mean it won’t eventually happen…”

Well yes, he doesn’t strike us as a chap who shies away from tasks simply because they look a bit tricky. He’s probably out there with the grinder as we speak. And as for all that stuff about cruising around slowly and relaxing – yeah, we reckon things are about to get a whole lot more hectic. The M54B25 straight-six may be largely stock right now, aside from a K&N panel filter and that raucous custom quad-tail exhaust, but there’s more coming here too. “It’s a really reliable, solid engine that I’ve found no need to play with… yet,” he says, with a malevolent smirk. “And yes, despite saying before that I’m not overly bothered about going everywhere really fast, I am very tempted to turbo the car. Make it a bit of an animal.”

You know what they say – if there’s any doubt, there is no doubt. Once the seed of an idea like that has been sown, it can’t help but grow and blossom. And Phil’s not out to impress anyone here, he’s simply doing all of this to please himself, which is a very satisfying way to live. Just an average dude who likes cars, and happens to be pretty bloody great at making really, really good ones. 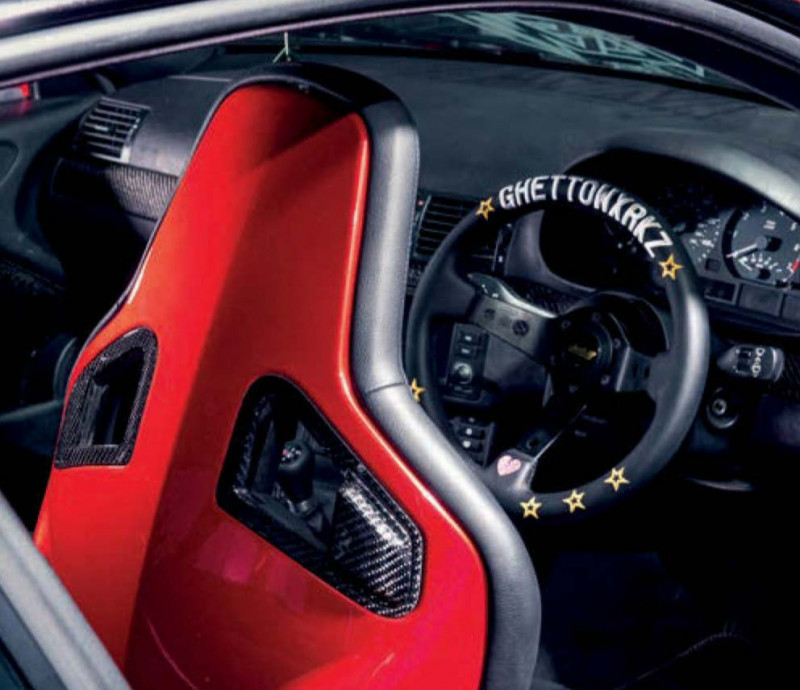 Will we see a turbo lurking under the bonnet in the near future? Watch this space...Ghettowxrkz steering wheel gives serious scene points The door cards have been custom made in carbon It’s safe to say that Phil’s not a fan of back seat drivers...

There’s even a coating of Soul Red on the Recaro seat backs. The wheel to arch ratio is spot on when the BM is fully aired out. Recaro Sportster CS seats were the first mods to be fitted to Phil’s Beemer. Phil’s BBS RS 16 rims have been stepped up to 18in with custom lips 12.5in wide rear wheels wear 295-section tyres.

We just love the colour choice on Phil’s car. Soul Red Crystal is a truly beautiful OEM shade by Mazda that’s totally wasted on the likes of the CX-7 SUV, and we’ve been waiting to see when someone will apply it to a proper modded project. Soul Red has been doing the rounds on various mainstream Mazdas for a few years now, but this new Crystal variant is an evolution of the formula – a 3-stage pearl paint, the base layer contains two different types of aluminium flakes: one that reflects light like a regular metallic, and another which absorbs light, thus giving the shade an unparalleled depth. The middle coat is translucent and the top coat is clear, creating the impression of an almost liquid-like appearance. Mazda calls this approach ‘takuminuri’ – this translates as ‘paint by master craftsman’, the aim being to make production cars look like hand-painted masterpieces. And given that Phil’s BMW actually is a hand-painted masterpiece, the effect has all the more impact.

“I’m just an average dude who likes cars – fast ones, slow ones, wide ones, low ones”