The addition of a 572bhp V8 turns the Ghibli into a genuine M5 rival – but one with a satisfyingly subtle approach to the supersaloon.

Yes, it is getting on a bit. And yes, it does still share some components from the Chrysler parts bin. And, well, yes, you probably did forget that Maserati still makes the Ghibli. But if you enjoy your supersaloons with a unique slice of character and personality compared with the usual suspects, then Italy’s answer to the M5 has just got a whole lot more compelling and, crucially, competitive. 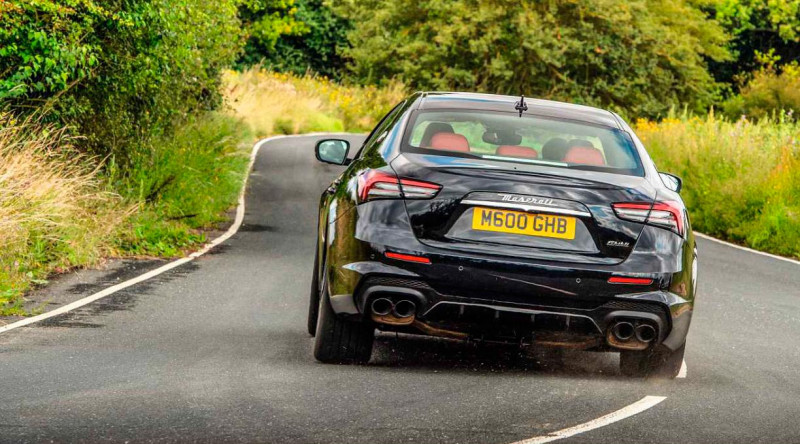 As with the Quattroporte, Maserati has added a Trofeo model to the Ghibli line-up, which means that for the first time the smaller of the two saloons from Modena now has an eight-cylinder engine where previously only a choice of six-cylinder petrol or diesel units was available. And where the infotainment system might be borrowed from Chrysler via parent company Fiat, the V8 is 100 per cent European and home-grown in Italy.

Developed by Maserati but built by Ferrari, the twin-turbo V8 is related to the F154 motor you’ll find in all V8-engined Ferraris from the Portofino to the SF90 (although the link weakens as you get closer to the 986bhp hybrid hypercar). Changes for the Trofeo include a wet sump in place of the Ferrari’s dry sump set-up and a cross-plane crank instead of the flat-plane item favoured by Maranello, the latter a prime reason why the Ferraris rev to 8000rpm but the Trofeo peaks at 6750rpm. And while the Ferrari and Maserati share the same bore size, the latter’s stroke is shorter, which is why it’s 3.8 rather than 3.9 litres.

It means the Ghibli’s power is checked at 572bhp – I know, how will we cope? – while peak torque is 538lb ft and available from 2250rpm. Now clearly these are hardly outputs to be sniffed at, even if the obvious German rivals all deliver over 600bhp and a twist more torque. Until, that is, you spot the porky 1969kg kerb weight and your heart sinks just a little.

But here’s the thing: the Trofeo has a level of performance for a car of its size and weight that feels prettymuch spot-on for enjoying on the road without attracting the wrong sort of attention. It’s plenty quick enough, but rather than focus on sprint times (62mph is reached in 4.3 seconds) and lap times, the Trofeo exudes a confidence and sense of purpose at being very much its own kind of supersaloon, one that can still make encouraging progress but doesn’t require you to have your legal team on speed dial.

Left in its Normal mode, the Trofeo’s V8 feels more in tune with your expectations of a GT car. It gathers momentum with an effortless gate, the revs barely troubling the midway point on the tacho as the eight-speed ZF auto slips between ratios. On long journeys it relaxes you, carrying speed without ever causing your heart rate to spike – which makes you question why rivals feel the need to be so highly strung even when they’re in their mildest settings.

A switch to Sport mode or Corsa, the latter also disabling the stability control and only allowing the firmer of the two damper settings, provides sharper reactions and amore intense V8 experience. Both modes up the ante, quickening the responses and opening the exhaust valves significantly so you can hear the passion that every Italian V8 is made with. There are no over-the-top pops and bangs, exaggerated roars and rasps, just a cultured tone you’d expect from an understated Italian sports saloon.

With the revs building faster and with a heightened sense of adrenaline, the V8 gets into its stride. It’s not as quick to rev as its distant cousins from Maranello, nor does it have that fiery top-end punch or the low-down throttle response Ferrari has achieved with its turbocharged V8. And yes, the twin-turbocharged eights from Germany generate more noise and deliver a level of performance a tier higher – as you’d expect of engines producing the power they do. But chances are you won’t care, because the Trofeo’s approach to being a supersaloon is from a previous generation, one that feels just as suited to today’s world as it did to the one of more than a decade ago.

With Skyhook dampers standard on the Trofeo (there’s double wishbones at the front and a multilink set-up on the rear) the units are continuously variable but do offer two distinct settings, with comfort a priority in Normal and ICE (as close to an eco-mode as you can get in a 572bhp supersaloon) and a harder setting when Sport or Corsa are selected. Left in the softer setting, the Trofeo’s chassis is remarkably calm and supple with a level of bump absorption you’d expect from a car that prioritises luxury over performance. The trade-off is a fair bit of body roll, and there are times on poor surfaces where a brittleness to the ride can filter through to the cabin as the 21-inch wheels struggle to disguise their mass.

Some of the body roll is addressed when you firm the dampers up and, when you do, the ride is still more compliant and settled than in anything carrying an AMG,M or RS badge is in their softest setting. The electronic steering, while quick for this era of Maserati, isn’t as pointy as many today, but you soon settle into enjoying its calm front end, and it allows you to place it on the road with precision and thread it neatly through a turn, leaning on the chassis and working with the feedback. The Pirellis sound and feel like they are going to give up early in the game, but push through the initial vagueness and hint of understeer and they bite hard (if noisily) and you can adjust your line via steering or throttle application depending on your mood. The mechanical diff in the rear axle takes longer to hook up than today’s faster, more sophisticated electrical items, but it does mean you have more say in the car’s balance and attitude.

It might not bludgeon the tarmac into submission, or chase the horizon like a puppy honing in on a ball, and if you want the fastest, most aggressive, supercar-like supersaloon the Ghibli Trofeo isn’t for you. If, however, you like your performance to be served more subtly, with a degree of desirability that doesn’t make you feel like you’re out to set a fastest lap with every drive, the first V8-engined Ghibli is that car.