Diesel Maseratis are dead. Well in the UK they are, at least. If I hear you squeak out a little “hurrah!” I don’t blame you; like me, you’re probably of the view that demon diesel never belonged in the tank of any Maserati in the first place. But hey – 2021 is a very different place to where we were a few years ago; let’s not forget that heady time when every single luxury car in Europe was all about diesel. 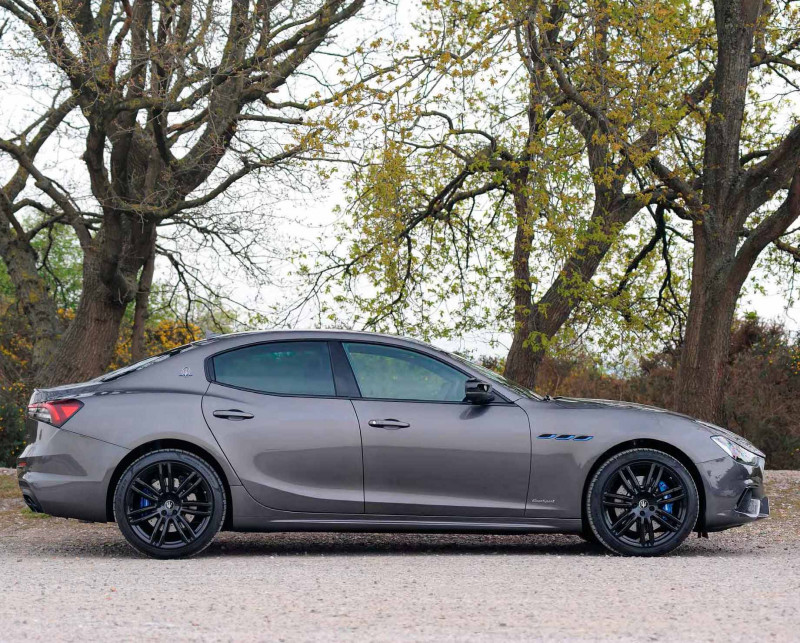 In 2021, of course, it’s all about electrification. A bit tardy to the party, Maserati is finally embracing battery power, and in a big way. The Ghibli Hybrid is the very first electrified Maserati to hit the market but the Trident going into the battery big time with six new full-electric models in the next two years, from 2022’s all-new Gran Turismo to a fully-charged iteration of the MC20.

The Ghibli you see here still doesn’t hit the full-electric button; it’s a mere hybrid. In fact, it’s barely even that. While most of the car world embraces plug-in hybrids and – apologies for adopting a certain Japanese company’s phraseology – ‘self-charging’ hybrids (ugh), Maserati is going down the ‘mild hybrid’ route. Essentially it’s fitted a glorified alternator powered by a 48-volt battery.

This is paired up with – wait for this – the first four-cylinder petrol engine in a Maserati road car since the 1930s. If the four’s 1998cc capacity seems familiar, that’s because it’s basically the same engine that lies under the bonnet of the Alfa Romeo Giulia. In the Ghibli Hybrid, the battery boost takes total power to a healthy 330hp and torque to 450Nm.

So how does it drive on the road? I’m not sure why, but it doesn’t feel as resolved as it should do. The ZF eight-speed auto ZF 8HP22 ’box works superbly but there’s a disappointing delay when you press the loud pedal before anything happens. Perhaps it’s to do with how the turbo spools up on a relatively small-capacity ‘four’ and how it combines with the hybrid system. But boosting responsiveness is explicitly what battery assistance is supposed to be all about. Maserati calls its ‘e-Booster’ an “electric supercharger” and it’s expressly designed to fill in the torque gaps as the turbo spools up.

The fact that it doesn’t do so very convincingly is a genuine surprise. Once everything is finally all boiling along merrily, progress is both rapid and refined. But what about the quality of the engine and exhaust notes? In the build-up to the test drive, Maserati promised me an “unmistakable sound” from new resonators in the exhaust. In reality the sound is pretty subdued right across the board. The only exception is an exhaust rasp in a very particular and small rev range. When it happens, it’s a very pleasing tone, but really it needs to happen a lot more. And ideally with a bit more gruff ’n’ pop, too – after all, that’s what makes driving a Maserati so special.

How about through the twisties? The electric steering is quite light in feel and remains consistent across the lock. It’s not unpleasant, being both fast-acting and sensitive. The Hybrid weighs 80kg less than the axed diesel model and, since the battery is mounted in the rear of the car, weight distribution benefits. This inherent balance engenders a pleasing neutrality to the handling, with both sharp and sweeping bends capable of being tackled with enthusiasm. The tail end likes to wag, even with the stability control systems engaged, but compared to the sharpest tools in the class – and I’m thinking Alfa Giulia here – it doesn’t feel nearly as switched-on. The word ungainly comes to mind.

Ride comfort is clearly prioritised over handling sharpness, and you do feel the body roll, even in Sport mode with the Sport damper setting button pressed. It doesn’t take long to realise that, while the Alfa Giulia aims to put a grin on your face over B-roads, the Ghibli Hybrid is more focused on maintaining an air of relaxed composure. Turn the steering wheel into a sharp bend and initially it follows your command like an eager dog, but then seems to get distracted and a certain wallowiness sets in.

The cabin remains a very special place to be and has clear improvements in the MY2021 car. The Ghibli Hybrid marks the debut of an uprated multimedia system with a larger HD screen (up from 8.4 inches to 10.1 inches) and fresh graphics, while the instrument panel is also new. It all feels so much more upmarket than the Alfa Giulia’s and comes with in-car Alexa so it can connect up to your home and you can even ask the car questions. At extra cost you can order Wi-Fi hotspots, too.

It’s not all rosy, though. Like all modern Maseratis with right-hand drive, your left foot is squeezed right up against the huge transmission tunnel and the pedals are offset well to the right.

Spot the MY2021 Ghibli by its light facelift, including a new front grille and rear light clusters with a boomerang-like profile, inspired by the 3200 GT. The Hybrid can be identified by its blue-coloured details such as the side air vents, callipers, rear pillar badge and cabin stitching.

Not having driven the mighty 580hp Ghibli Trofeo yet, the V6 S remains our pick of the Ghibli range as a driver’s car, but there’s no doubt that the Hybrid version will make sense to many buyers. By the way, Maserati’s mild hybrid system has just been added to the Levante range and will soon find its way into the Quattroporte, too.

Nece design — but very bad tech - I hope that I am right because Maserati doesn't underrate horsepower like Audi, BMW or Mercedes does. The Trofeo leans more middle-ground than high-ground, despite being marketed as the latter. That means its performance is more closely comparable to the Audi S6, BMW M550i, and Mercedes-AMG E53; although one could argue that in top speed it beats the RS6/M5/E63 type of cars