Hip to Be Square

On the outside, these boxiest of boxy 1960s Italian saloons are all about the perpendicular. There is, though, a lot more to them than unrepentant 90-degree corners and crisp, no-nonsense linearity.

Both quattroporte models hail from marques with a great sporting heritage. Each added considerably to its respective marque’s sporting legend on track and rally stage — well, their shorter-wheelbase coupe sisters did, at least — yet now these once commonplace saloons have become real rarities. Each of ‘our’ cars is also a go-faster interpretation of the entry-level berlina: the ‘Super’ version of Alfa Romeo’s Giulia and the GTE-badged Lancia Fulvia. 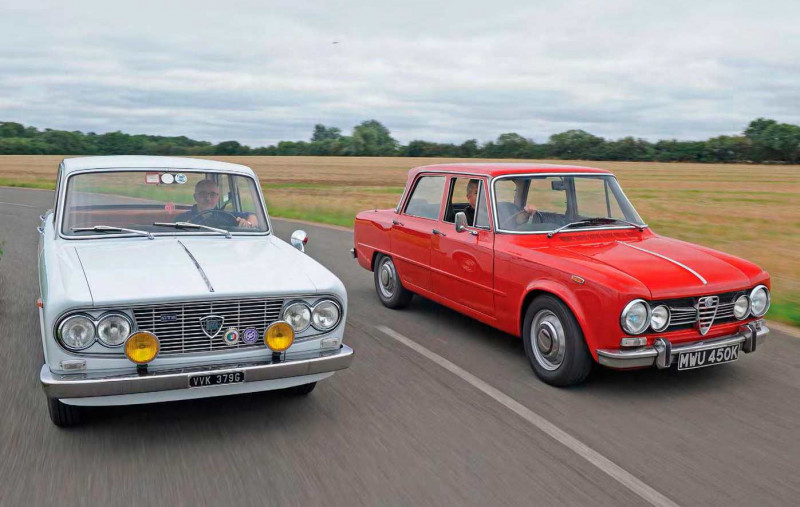 Starting with the Alfa — alphabetically and chronologically — we have Chris Taylor’s 1972 Giulia Super. Eagle-eyed readers will note the car’s biscione trim and its slightly lowered and uprated ‘fast road’ suspension (courtesy of Classic Alfa), whilst only the telepathic will sense that there is something more gruntsome and torquesome under its bonnet than the original 1570cc twin-cam — a younger 1962cc ‘Nord’ brother.

The Giuseppe Scarnati Tipo 105 Giulia story is well known, so we can skim through its gestation. The 1965 Giulia Super followed in the wheel tracks of the 1963 110hp Giulia TI Super — featuring more mid-range torque, less power (96hp) and milder performance. The sprint to 60mph took just 11.2sec on the way to a top speed of 110mph, but perhaps the most gob-smacking statistic concerns the sales figures: of 575,390 Giulia saloons made, 177,897 were Supers.

Chris’s Super is a late model from just before the introduction of the 1972 Giulia Super 1.6, a stopgap model built until the Nuova Giulia models of 1974. Having a long Alfa CV, Chris’s purchase in 2014 was inspired by a 1750 berlina he had used as a road car and auto-tester. These tests, organised by Michael Lindsay on old airfields, started a motorsport itch.

“Immediately you want to go faster because you think that you’re a car control god — after going sideways at 25mph in a car park — so I joined the race series. The late Mike Buckler from Gatwick Alfa put a cage in the car and lowered it, and I raced it with its 1750 engine for a few seasons. People were saying get a 2.0-litre, so I tried to blow the engine up by holding the revs a little bit longer but it refused to blow up! So in the end, I just put in a 2.0-litre and Mike put a limited slip diff in.”

So what is it that really appeals about the Super? “What this era of Alfa Romeo is really good at is touring. Everybody raves about the handling, but I find it a bit understeery. It’s progressive but really what it’s best at is swift A-road cruising. You have just the right amount of power for popping past traffic as you come across it and because it looks like this, people don’t think you’re a thug! You get lots of friendly looks, so you get a nice feeling each time you go out in it.”

One recent Super journey in particular comes to mind, says Chris smiling: “We went to Essen for the classic car show with four adults and all our luggage for a four-day trip. When we got to our hotel, there was a little turnaround area in front of it. There were a load of Italian guys checking in at the front desk, they were all excitedly chatting to the German staff with their cases open and laptops out. Then one of them looked round and did a double take when he saw this coming. He got a friend’s attention and the next thing, they’d all abandoned their stuff and came piling out of the reception… ‘You drove this from England...? Four people...? The steering wheel is on the wrong side!’ They just thought it was bloody brilliant. It does bring out the good in people. “You know about the much-vaunted desegnato dal vento (designed by the wind) aerodynamics? I GPS’d it at 75mph in fifth gear and you can still chat away, so it must have blown people’s minds away in 1960s. It doesn’t really need a 2.0-litre because you can’t drive fast anymore.”

Moving on from 1962 to 1963, it’s easy for the smaller white Fulvia GTE to be overshadowed by the red Alfa. The Lancia Tipo 818 certainly does up the boxiness, but then it does seem to offer more interior room with a more upright driving position, making it more family-friendly than the Alfa.

The Giulia Super’s dashboard clearly has a stronger emphasis on performance driving, with its large clear round clocks, a spicier speedo and extra acqua and olio gauges on the centre console. The Fulvia’s facia is closer to the strip speedo arrangement of the original Giulia. Its spinning drum speedo, tiny watch-like tacho, wing mirror and Perspex wind deflectors lose you in 1969 nostalgia. It isn’t merely the fact that this is one of the last of the original series Fulvias — before the model was facelifted in August 1969 and the company acquired by Fiat — but its patina and originality are positively enchanting.

The rubber floormats suggest an element of utilitarianism, but this is countered by everything with which you come into contact: the slim, horn-rimmed steering wheel, finely ridged for extra grip when it’s hot ’n’ sweaty; the positive floor-mounted leva lunga gearchange (something later Fiat-era Lancias seem to lose); and the switches that operate with an action that softly whispers quality.

The narrow 13-degree V4 which powered the Appia’s heir may have sounded like familiar fare, but it was an all-new 1091cc unit and far more powerful than previous V4s (59hp). Also placing distance between Lancia’s new baby and its predecessor was a change of driven wheels, to those at the front.

The tall V4 is either, depending on your view, a double overhead cam or single cam per bank; in period the press seemed to prefer the former. Whatever, the V4 was canted over by 45 degrees to lower the bonnet profile, and its transmission and suspension were similar to the Flavia’s.

If the Fulvia’s mechanicals owed something to its older brother, then it returned the favour by inspiring the styling of the later S2 Flavia. Outside there are a few subtle visual characteristics which Piero Castagnero would pass from his berlina to the lauded Fulvia Coupé, particularly the four-lamp front, around the rear wings and the rear lights.

The GTE is the ultimate version of the original series berline, which had grown in power output via capacity and carburettor count. First came the 71hp 2C (denoting two twin-choke Solex carburettors), then the 80hp GT, which grew from 1216cc to 1231cc.

Introduced in 1968 – and current for just one year before the S2 Fulvia – the GTE resurrected the old Appia Gran Turismo Esportazione name. This four-door Fulvia range-topper packed the 87hp 1298cc from the Coupé Rallye 1.3 under its bonnet, along with a brake servo (which this car is currently running without).

It is certainly an unusual car to track down and bring to the UK, so the question for its owner, Vince D’Angelo, has to be, why? “Having an Italian background, my youth was full of Fiats. My first car was a 128 SL. Imagine that, a coupe when you’re 17. Then I went to a 128 3P, two X1/9s, a Strada 105 TC — all that kind of stuff. When I was growing up, I had a notepad and in the back was written: Fulvia Coupé, Fiat 124 Coupé and Alfa Junior. When I got to the point of being able to afford a classic, I couldn’t bring myself to buy a coupe because they were either too expensive or they’d been used and abused by multiple owners.

“I bought this saloon in 2017. I flew to Italy on a oneway ticket, bought the car and drove it back. It didn’t let me down — in fact, it has never let me down. I used it as my wedding car in 2019 and the plan is to one day take it back to Sicily — return it home.”

If the Alfa is all about beating up enjoyable roads, deeply inhaling its performance and enjoying the raw connection with its dynamic flair, then the Lancia’s forte is its ability to make you relax. Unlike the five-speed Alfa, the Lancia’s top gear is fourth, but when top is selected the engine revs drop and the hushed cabin is filled with refinement.

“The original owner left this car to his two sons,” says Vince. “It was parked up in 1991 and was a time-warp car. There were things in the footwell pockets from the period and a newspaper from 1985 behind the spare wheel. There were all these things, these nuggets — all to do with the car. It was wonderful. I hadn’t realised when I drove it back from Italy that the tyres were also from 1985! The engine has never been apart and the paintwork is mostly original.

“It is boxy, but it has finesse,” emphasises Vince. “There are little highlights on the rear wings, subtle curves and just the right amount of bling as well. It is understated and classy, that’s what I like about it. I think I’m too old for a Fulvia Coupé, and everybody has one, whereas there are fewer of these around — just three in the UK — and it gets smiles. You don’t feel pressurised to thrash it everywhere because it’s a saloon and you’re supposed to go around sedately. Having said that, I have taken it through Europe, hammered it through hairpin bends and through the Alps, too. I just love it.”

Ultimately 1962cc versus 1298cc is an unfair comparison. The Giulia Super is of course the more muscular, more sporting and lighter car — it epitomises how a great Alfa should drive, thrill and entertain. The Lancia is more softly sprung and when pushed it does roll more and, like the Alfa, ultimately understeers; but there is a subtle sporting note to its partially stainless exhaust, it is nimble and fun, and it never feels overwhelmed by modern traffic. Whereas driving the Alfa tends to be about bullying apexes and tickling the redline, the Lancia suits a more laid-back approach. I can certainly understand why Motor magazine described the Lancia as a “well made small luxury car” with “good performance and roadholding”, labelling it a “connoisseur’s compact”. Yet what really strikes me is that, while these two boxy saloons share much, they have such disparate characters.

Initially the only suggestion I can come up with involves the acquisition of a double garage. Yes, the Charlesworth heart is already in the tight grip of a certain biscione, but as I try to pick a favourite and wonder whether the ‘E’ in GTE stands for Extra horsepower or Esportazione, it suddenly dawns on me that it is the Lancia which is preoccupying my mind.

Many thanks to Chris Taylor, Vince D’Angelo, Alex Jupe and Tim Heath of the Lancia Motor Club for their help with this feature.

GTE uses the 87hp V4 engine from Lancia’s Coupé Rallye 1.3, giving it both finesse and refinement.