What started out as a humble 330d has been reimagined as an angry torque monster. Gammi Younis’ 535d-powered E90 hates tyres and wants them to be destroyed… Words: Daniel Bevis. Photos: Ade Brannan.

TORQUE OF THE DEVIL

Kaboom! That, the sound of the thunderous volcanic explosion that gives birth to the mighty geode! Nature’s busy getting up to all kinds of shenanigans like this all the time, of course. When it’s not forcing minerals from hydrothermal fluids to form crystals within spherical volcanic rocks, it’s incrementally dissolving old dinosaurs into a sort of gloopy paste that we can refine and power our automobiles with. It’s bonkers when you think about it. 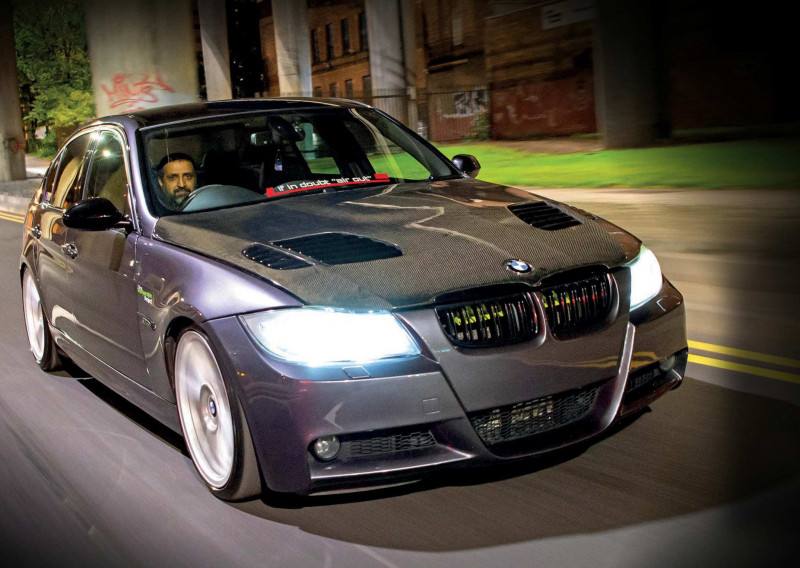 And humans are just as creative and impressive as the planet itself. Just look at what Gammi Younis (@motortechnics) has been up to with his E90. By applying great natural (and some really quite unnatural) pressures to his derv-powered saloon, he’s created something really quite astounding. Much like a geode, with its dark and unassuming exterior that hides unforetold treats within, what started out as a humdrum 330d has been reimagined beyond recognition: there’s a 535d engine in there, and a 330d manual gearbox, and the interior from an F80 M3. What manner of madness is this? Hey, it’s evolution, baby…

It takes a proper enthusiast to get up to this kind of stuff, and it’s no surprise to learn that Gammi has been a hardcore BMW obsessive from the get-go. “Well, it’s the ultimate driving machine, isn’t it?” he grins, having neatly swallowed the old-school marketing bumph wholesale. “My first car was an E30; I bought it from a close friend of mine, Moni, who I lost a few months later to a car crash, so there’s a great deal of sentimental value here.” 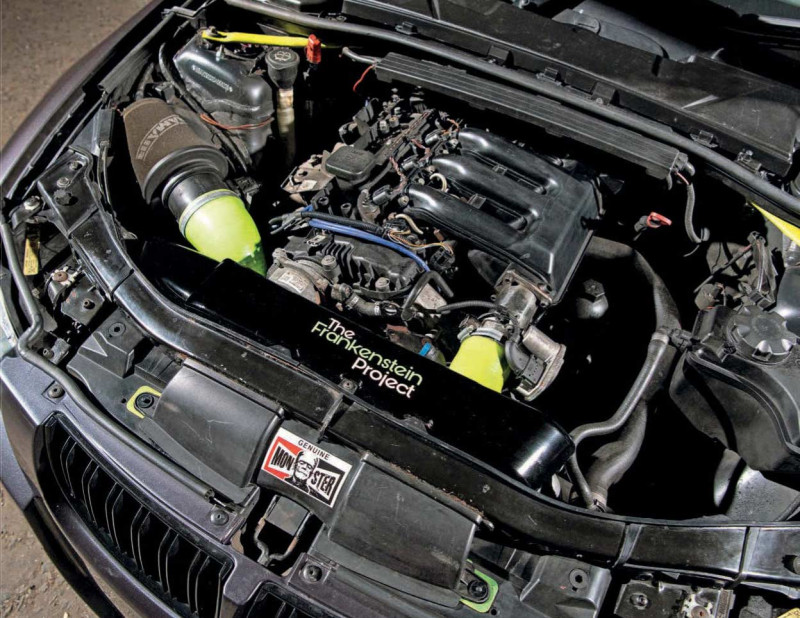 These still waters run deep, and when we ask Gammi about his automotive history thus far, it’s no surprise to learn that it’s been a veritable squadron of Bavarian propellers. “I’ve had six E30s,” he says, “as well as two E39s, an E46, and a wrenchbuilt 500bhp+ M140i. My next car? Yeah, that’ll definitely be an E30.”

He’s a man who walks the walk, for sure, and as owner of custom shop MotorTech, he also has the skills to pay the bills. Anything car-related that he can possibly dream up has a decent chance of being spirited into reality by this mechanical wizard, so it was hardly a shock when his plan to pick up a sensible E90 diesel as an everyday runaround would soon be radically reframed.

“This car was totally stock when I bought it from an independent dealer,” he says. “I couldn’t really pass it up, it was a lovely one-owner example, clean and unmolested.” But did he actually have a plan for it from the outset? You bet your bottom dollar he did. “I have a plan for every car I buy,” Gammi grins, and by this point, we’re really starting to get the measure of the man. There’s no mucking about here, this fella has a creative streak a mile wide, and he follows up on his intentions with gusto. 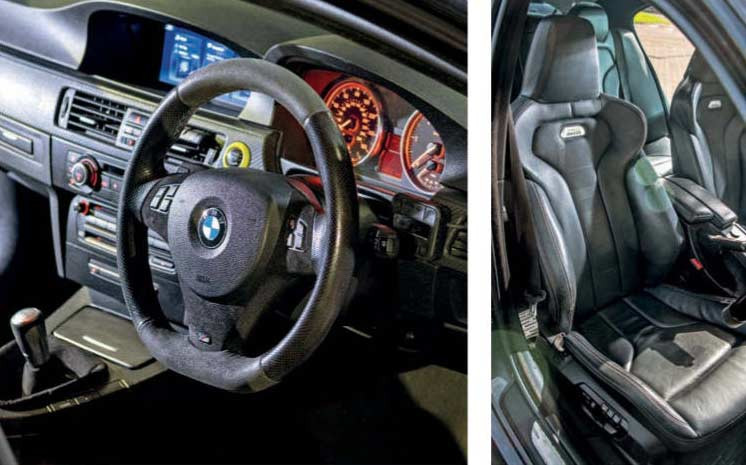 “The car started life as a 330d, and the chain snapped,” he explains, “so I ended up buying a 535d to swap the motor in, thinking ‘this should be easy’ – little did I know I had bitten off more than I could chew!” He’s being endearingly self-deprecating, of course, as the results before us speak of a very well-chewed morsel indeed. “So a two-year project was embarked upon, featuring many sleepless nights; the engine got dropped in, retaining the manual drivetrain from the 330d, and the ECU was sent to BW Chiptune in Hayes, with Jason working his magic. While we were fitting the engine, the timing chain was done, the EGR was removed and blanked, and a Wagner intercooler was fitted, along with a custom 3” turbo-back exhaust system with sport cat. It was then remapped by JFA for a Stage 2 tune.”

The results of this heart transplant are seriously impressive: peak horsepower was dialled back to a conservative 360hp simply to make sure it was usable without the clutch exploding, and the torque is the real story. It’s well documented that diesel engines trump petrol motors for down and- dirty stump-pulling, but this thing’s just deranged – we’re talking 516lb ft, more than you’d get in an F10 M5, which makes it incredibly efficient at atomising its Michelins at barely above tick over. This thing has enough torque to pull the rug out from under your feet from several miles away.

With the growly noises and shouting taken care of, the rest of the project started to come together in pretty quick succession. As so much effort had been expended on the powertrain, it made sense for it all to be wrapped up in a prettier form, so the Beemer was treated to a full respray in its original factory colour of Sparkling graphite metallic, with a gloss black roof added to break up the details. “I’d always wanted a GTR bonnet, so that decision was easy,” Gammi grins, “and when a carbon one came up, I jumped at the chance. And after one carbon part was there, the rest soon followed: it really is an addiction.” Indeed, the racy weave now makes up the grille, the boot spoiler, wing mirror caps, and all sorts of interior details. And speaking of the interior, that’s where some of the real magic happened. “The seats are my favourite part of the car – I just haven’t seen this done before,” he enthuses. “I wanted to try something different, do something a bit daring, so I fitted the front and rear seats from an F80 M3.” It takes no small amount of ingenuity to make something like this work, and of course, the M3’s front seats have carbon shells, so this was a win on all levels. It’s not just the seats either, Gammi’s also added a custom Alcantara flat-bottom steering wheel, the carbon trim from an E90 M3, and leather E90 door cards to match the seat trim. It truly is masterful. With such a cohesive and obsessive approach being implemented, the chassis never had a chance of remaining stock. 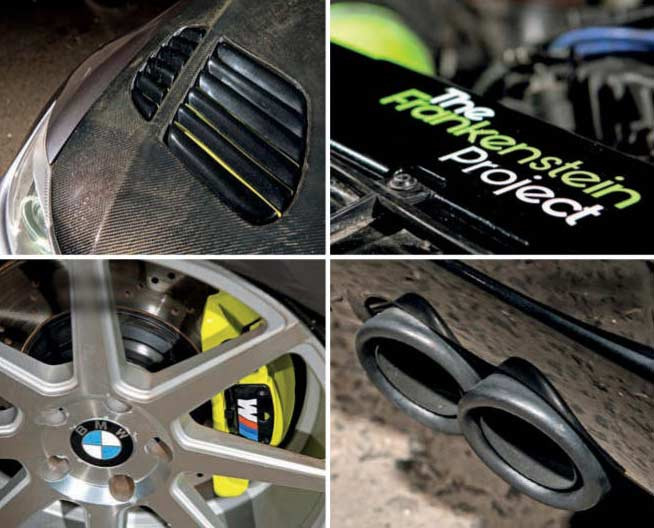 “I was originally running the standard suspension,” he says, “but then a deal came up on a set of Air Lift suspension that I just couldn’t refuse!” Good man, that’s what we like to hear. And naturally, bagging your ride demands improved rolling stock so as not to make your arches look like they’re floating over castors, and this is an area in which much consideration has been given. “I’ve been through quite a few sets of wheels,” Gammi tells us, “but when I saw these Ispiri ISR8s, I couldn’t resist. Again, they’re a bit different.”

Yep, ‘a bit different’ is very much the theme of the car – this is evidently a man who likes to come up with fresh and offbeat ideas rather than simply following the herd and fitting the same off-the-shelf parts as everybody else. And when you’re as creative as this chap, the ideas just keep on coming and coming. Don’t go thinking that the car you see in the photos is the finished product; yes, he’s got it to a wonderful feature-worthy standard, but there are plenty of new ideas bubbling away behind the scenes. “I’m planning to upgrade to hybrid turbos,” he lets on, with a malevolent smirk. “And there will be water/meth injection too, plus M50d injectors and fuel rail to cope with it all. I’ll be upgrading to an SMD Stage 3 clutch so we can map the power up a bit higher, and then it’ll probably get a full vinyl wrap too.”

See, these creative types, they can’t be stopped. It’s just the nature of nature itself: much as geologic forces can’t be stopped from smashing rocks together to create new and vibrant entities, so the whims and fantasies of bona fide petrolheads must be quenched. This isn’t the last you’ll be seeing of Gammi’s E90. Well, until he bonfires the tyres and hares for the horizon, anyway. Simple single tank and compressor setup Air Lift controller Carbon double-slat grille up front Custom. 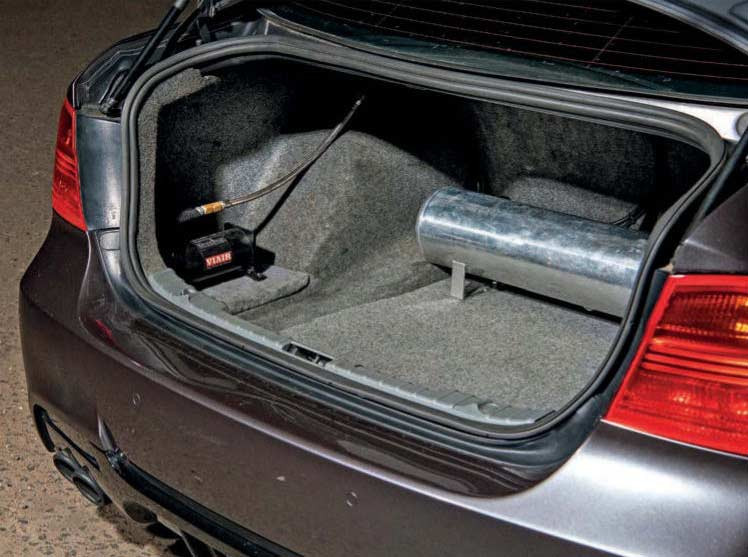 Twin-turbo M57 makes 360hp and 516lb ft of torque 3” exhaust system has been fitted Ispiri ISR8 19s and Acid Green calipers Carbon GTR bonnet. Exterior additions are subtle, but give this E90 plenty of presence. “ What started out as a humdrum 330d has been reimagined beyond recognition: there’s a 535d engine in there, and a 330d manual gearbox, and the interior from an F80 M3. What manner of madness is this?”