This freshly restored 1950 Ferrari 195 is an intriguing and unique machine. There are almost as many mysteries about it as there are hard facts, as we discover. Story by Peter Collins. Photography by Michael Ward.

The mysteries of a very early road Ferrari

Have you ever enjoyed one of those moments when, with friends and perhaps after some Brunello, the conversation follows the style of Marlon Brando’s On the Waterfront quote – “I could’ve been a contender” – about all those ambitions that seemed a good idea at the time and surely should have been followed by success? 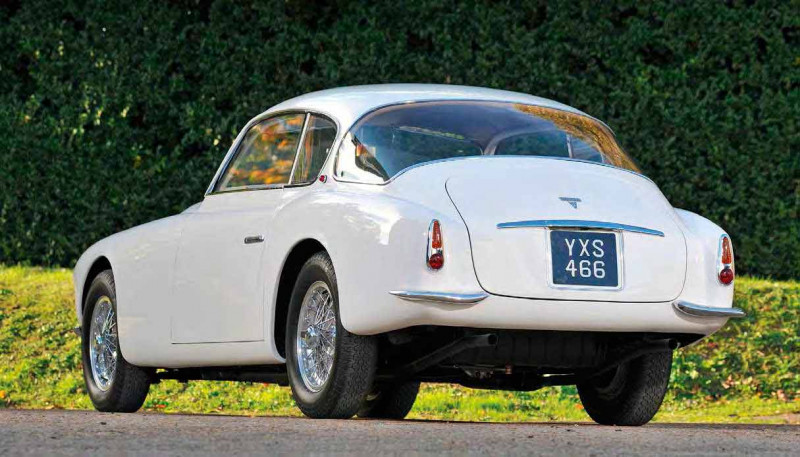 Enzo Ferrari never really considered building cars for touring or road use when he asked Gioacchino Colombo, immediately after the war in 1946, to design a 1.5-litre V12 engine to go in the first car to bear the name Ferrari on its nose. The Auto Avio of 1940 was a ‘Ferrari in disguise’ because at that time Enzo was legally bound not to build a car bearing his name after the split with his former employer, Alfa Romeo.

The story goes that Luigi Chinetti, the driver and dealer who had featured before the war in Enzo’s working life, not least by being on the driving strength of Alfa Corse and winning the Le Mans 24 Hours twice in the 1930s, drove – with his wife and new child – in a dilapidated Citroen Light 15 from Paris to Modena to re-establish relations with Enzo and maybe look at a future working arrangement together. This was in the freezing depths of winter just before Christmas 1946. 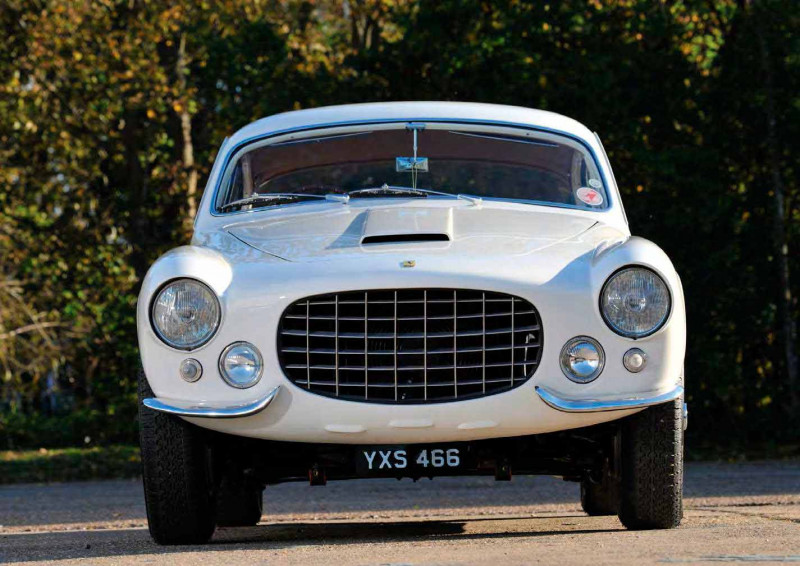 The conversation, according to Brock Yates in his book Enzo Ferrari, went exactly along the lines of Brando until Chinetti, who was to become Maranello’s US agent, described business conditions across the pond at the time. He did so with such intensity and enthusiasm that it’s not fanciful to suppose that this moment was when the idea of a road-going Ferrari first took seed in Enzo’s mind.

Until this point, he had considered nothing more than resurrecting a racing team with his name at its head, as that was what he knew best. Whatever the outcome, it was many months of engineering development before the first Ferrari, a bare chassis with engine and drivetrain, took to the road. It was many months after that when the first ‘road’ car was produced.

The situation regarding early Ferrari road car production is outlined by Doug Nye in his Ferrari book: “Quite often these touring cars were built in restricted series and more often than not there was a great deal of variation, even amongst the models of the same series.” Yates also stated: “Historians trying to determine the exact production of the early machines have encountered massive confusion as some cars served more than one function [racing and road] before being sold or disposed of.”

Early Ferrari production was minuscule. The best estimates are five units built in 1948, 21 in 1949, 26 in 1950 and 33 in 1951. We know that engines were swapped between cars or, as development continued, the latest version would be substituted, especially in favoured customers’ cars that were used for competition. Enzo cared little for the company’s pure road car clients as they served only to fund his racing programme.

So, pinning down the full story of a Ferrari road car dating from 1950 was never going to be an easy task. The one point that we can safely say without fear of contradiction about our featured car is that it is a Ferrari 195. Right from the beginning, all models were designated by the cubic capacity of a single cylinder, hence the company’s debut 1.5-litre V12 was a 125, its 2.0-litre a 166 and when that was updated to 2.3 litres in 1950, the designation became 195 and subsequently 2.6 litres meant 212 and so on into the future.

To cut to the chase, ‘our’ car here bears the chassis number 0113S – in other words a road car with a ‘Sport’ chassis. It was described at its parturition as a 195 Inter Coupe Ghia – Inter being the title given to early Ferrari road cars. Most quality cars produced in Italy at this time were fitted with right-hand drive, so it’s no surprise that 0113S was built as a right-hooker. Its life story is recorded as having been completed on 11 December 1950 and going first of all to Ferrari’s favoured Milan agent, Franco Cornacchia, who sold the car in June 1951 to Alfonso Scimé who paid 2.5 million lire for it.

Originally painted white, it would seem that, some time after it was first built, both the front and rear of the car’s bodywork were heavily modified. The front wings, headlights, grille and bumper were all changed, as were the C-pillars and rear window, the result being what we see today. There is no record of which company made the changes but it was certainly done in Italy during the original owner’s tenure.

The next record comes in 1959, when 0113S was with another Milanese dealer, Michele Vernola, who exported the car to Los Angeles, where it was acquired in around 1960 by Lawrence Knaack of Illinois. At this time, the paintwork is recorded as being metallic grey. By the late 1960s, 0113S was with Robert Johnson, also of Illinois, who offered it for sale in January 1976 for $10,500 with around 40,000km on the clock. It would seem that same year it changed hands again and with 26 years behind it, it was stripped down ready for a thorough restoration.

This took some time and was not completed until 1986, at which point the trail goes cold. Then the car turned up as a lot at an RM Sotheby’s London auction in October 2011, where it sold for £280,000 to an unknown buyer. It next appeared in 2012, when it was displayed during the launch of the new F12berlinetta in Hong Kong. Six more years went by and it once again came up at an RM Sotheby’s auction, this time in Monaco, where it sold for £522,000.

It found its way into the very capable hands of Ian Barkaway and his team at their premises near Maidstone, Kent. Barkaways worked extensively on the car to make the fabulous job of it that you see here. In newly restored form, the 195 Inter debuted at the 2021 Salon Privé concours. It was entered in the Post-War Closed (European) class and duly won a runners-up prize.

Ian Barkaway told us: “At the beginning of Barkaway’s journey with the car, I flew to Scotland to discuss the project with the owner whilst looking through the boxes of history collated over the past 70 years. It was initially agreed to send the car down to Barkaways for a thorough assessment, but when we tried to run it, the brakes didn’t work and the engine ran very badly. Eventually we decided to strip it down and the body was sent for media blasting, following which some of the original welds where the body had been modified were revealed.

“After the Colombo V12 was removed and stripped down, we could see that it was in a sorry state and still had the original three-piece head gaskets with individual copper rings on the top of each liner. It was interesting to note that it has a dog-box gearbox design, which certainly makes for an interesting drive in such an early Ferrari! In addition, it has classic early Ferrari transverse leaf front-suspension.

“Parts were certainly the biggest challenge on this project. The rarity and age of the car meant that many of them had to be specially fabricated. There is no question this is a unique car. Unveiling the car at Salon Privé was a fitting end to what has been a challenging journey.”

Here we have a perfect example of an early Ferrari road car conundrum. During inspection at Salon Privé, it was noted that certain of the car’s features suggested that Carrozzeria Touring was involved in its construction, although the car has always been described from the beginning as by Ghia. Now Ghia was only ever responsible for the production of road car bodies for Ferrari, these being built on the usual Gilco chassis but with the wheelbase lengthened by 250mm to 2500mm (Sport models would have been mounted on a shorter 2250mm wheelbase). Even though 0113S car bears an ‘S’ chassis plate, it has always been described as an Inter.

To strengthen the ‘Sport’ lineage, the car was originally fitted with three carburettors, whereas a road Inter would normally have had only one.

Interestingly, the very next chassis in Maranello’s road car sequence – number 0115 – was also designated as an ‘S’ and was also built on the longer wheelbase but it had only a single carburettor. If our feature car really is a Sport, then that would suggest it wouldn’t have been constructed by Ghia; but if it was by Ghia, why does it have an ‘S’ chassis suffix? And who precisely modified the body back in the 1950s? Research continues and it would be more than splendid if a solution were found. As Winston Churchill once said: “It is a riddle, wrapped in a mystery, inside an enigma.”

Triple carbs are part of the ‘S’ (Sport) spec. Car won an award at Salon Privé, with Ian and Ben Barkaway on hand.

One of the first 50 road-going Ferraris ever built, this 195 Inter from 1950 has unique bodywork.

Car was returned to original white paint during restoration, which presented huge challenges for the Barkaways team.

The car featured, chassis #0113 S, was modified (C-pillar and rear window) and the front converted in 1957 only prior to the sale on 1 July 1958 to Vernola. This Italian dealer then exported it to California. I have all factory records as well as the period Italian registration documents in my archive. I also have a number of period photos taken in the 1950s. If you look at a photo of the similarly-styled Fiat Ghia, it is easy to compare it with 0113 S.

The car had three owners in USA, with the last one keeping it for 35 years in his home in Florida, where I carefully inspected the car 11 years ago.